It's okay to make mistakes

I took the four youngest kids to the pool this afternoon while Rachel and Miriam were stuck at home working on the tutorials for their data science course. The description says it should be about 10 hours of work per week, but I'm sure the girls put in at least 40 hours last week. They are working on that class all day, everyday, it seems. But they're learning a ton! Andrew's been quite impressed with how much they're covering (since he teaches the same sort of stuff in his data visualization course) and how well the girls are doing. Anyway, we left them home to finish their assignments and headed to the pool which was, predictably, empty.

Public schools are back in session this week and we couldn't be happier to have public spaces to ourselves again!

So it was kind of an exhausting trip to the pool for me. Benjamin and Zoë insisted on pushing each other's buttons and were constantly bickering (which was rather irksome to me) and Phoebe and Alexander just...take a lot of supervision. (And it had already been a bit of an exhausting day already).

But they sure are cute little pool buddies! 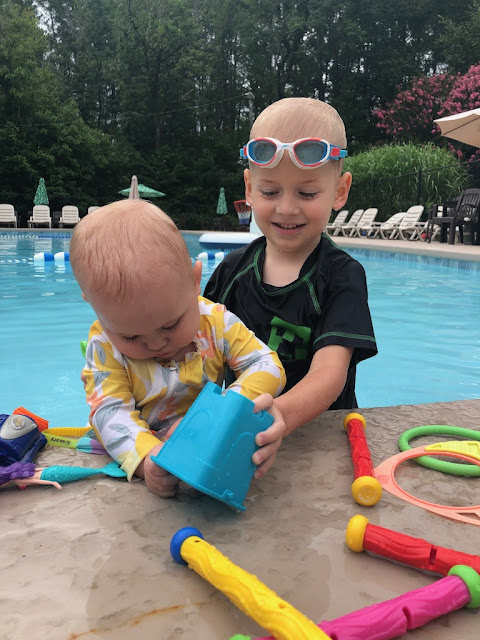 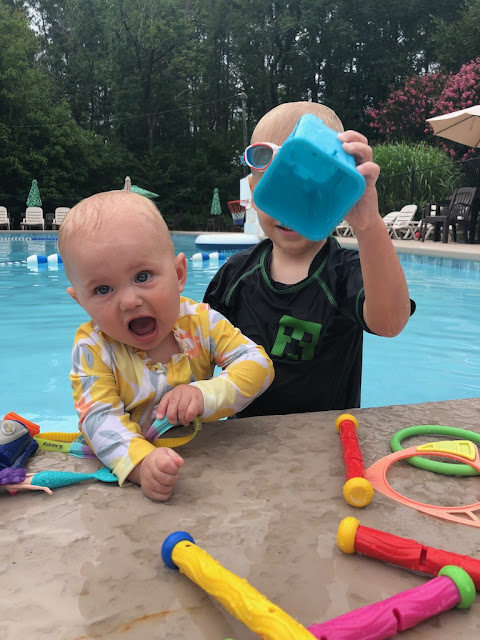 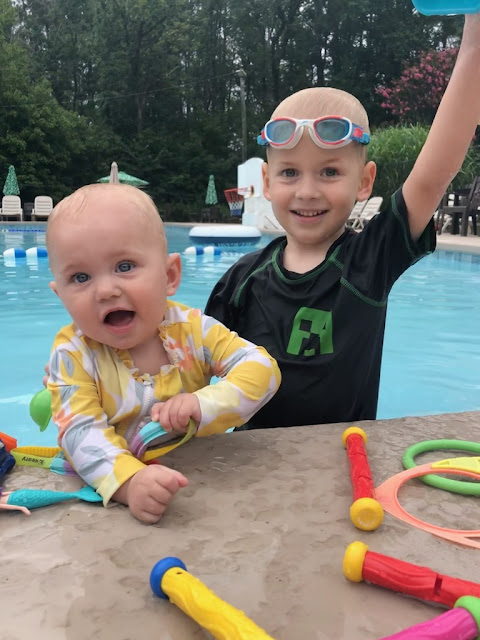 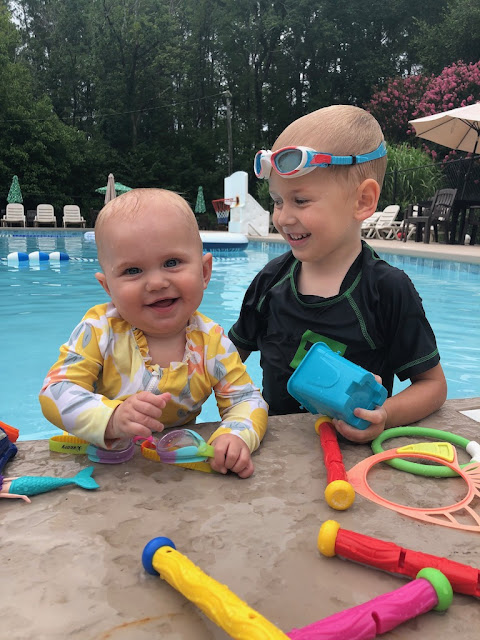 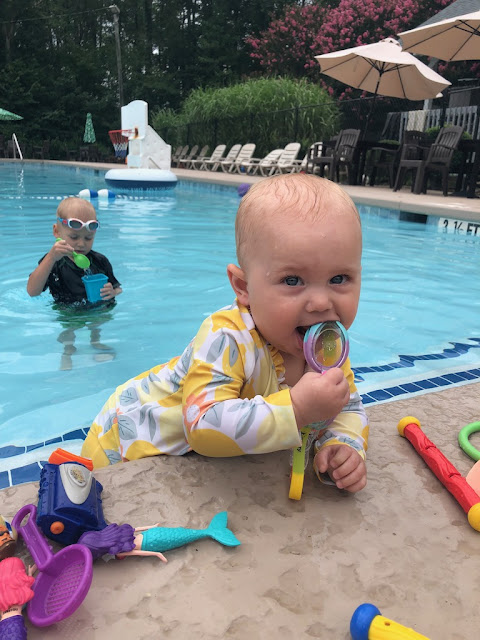 See those sinking toys? I'm going to tell on myself a bit here and tell you that I really, really dislike misplacing things, especially items that belong to a set. It's probably not possible to tell this from looking at my house, which I can't keep organized to save my soul. And it's not, like, everything. There are some things I don't care to keep track of and I know that things wear out and aren't meant to be around forever. But for some reason I get really anxious about keeping certain sets together.

Like these sinking toys. We've had them since living in Durham. So at the very least they are six years old. They're probably more like nine years old. And we've just always kept track of them. We have two of each colour: blue, green, pink, red, and yellow.

Today we couldn't find our second blue stick and Benjamin "looked" and couldn't find it, and Phoebe was incredibly ready to go so I knew that I couldn't look around and actually look for it, so even though it killed me a little (or liberated me?), I said, "Oh, well. Let's just pick everything else up and go."

So you lost one diving stick in one decade. You are going to survive, girl! It doesn't mean you've failed in Keeping Things Together 101 (though it might, if you cry over this). It means you lost a little toy that you purchased a decade ago. It. Does. Not. Matter.

Imagine, then, how I felt when I stripped Phoebe out of her wet clothes and reached into the diaper bag to discover...I hadn't restocked it.

There were no diapers inside.

So now I had lost a diving stick and forgot to pack diapers (and had spent the past 1.5 hours listening to my kids argue). That's cool.

I dug around in the diaper bag and found, buried deep at the very bottom, a big ol' postpartum pad from the hospital. That'd do us! I tucked it inside an extra pair of rubber swim pants and we made our way home just fine. 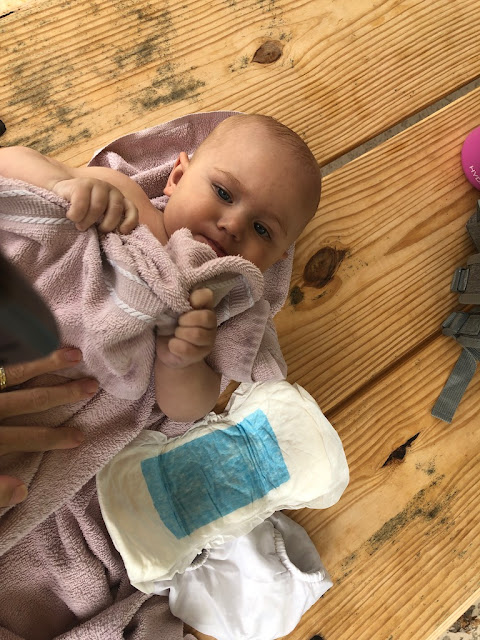 As Alexander likes to remind me (and which he in turn learned from Daniel Tiger), "It's okay to make mistakes! Try to fix them, and learn from them, too!"

Usually I interpret this song the way I was taught to interpret repentance (which I honestly think is...wrong...or at least incomplete): the evidence of having actually learned from your mistakes is to never repeat said mistake.

I think there's something to that relatively common idea—that you can only make a mistake once...because after that it's a choice. After all, we should learn from our mistakes, right?

But I think we can learn other things from our mistakes, as well, and those lessons are just as valid.

And I'll probably lose my temper or gossip or do some fault-finding or, you know, whatever other pet sin you might care to name again, too. Not because I'm planning on or choosing such "sin," but because...I'm a human being...and I'm guaranteed to mess up somewhere.

I can't learn to not make mistakes.

Even striving to correct my mistakes so that they never happen again won't make me inclined not to make other mistakes—or even the same mistakes—again.

(But such striving probably will earn me a touch of scrupulosity.)

I'm just going to keep making mistakes until the day I die.

Then I think about trying to master a skill—a language, a piece of music, a handicraft, a sport—and how the only way to learn that thing is literally by making mistakes over and over and over again. And then being willing to make the same mistakes—or different ones—some more. That is literally the way humans learn everything. It's how we learn to walk and ride a bike and play the piano and code.

So I think the real lessons I can learn from making mistakes—and trying to fix them and learn from them, too—are that (1) mistakes are inevitable, (2) mistakes are important, (3) mistakes are fixable and should be fixed, (4) sometimes before you can—or in order to—fix a mistake you have to make the same mistake several times, (5) I can overcome "tricky situations" and learn hard things (6) I can feel disappointed about something without feeling disappointed in myself, (6) other people are allowed to make mistakes (even the same mistakes, even over and over again), too.

Are there any other lessons I'm missing?