Rachel's birthday was over a month ago, but her birthday balloons have been sitting stalely on the birthday trees waiting for Andrew to buckle down and write out a birthday message for Rachel.

The summer wasn't ideal, truly. We spent a lot of time being sick, a lot of time navigating disasters in the house (like, for example, our oven has been out of commission for about as long as Rachel has been 15), a lot of time...I don't even know what. All small stuff, really, but exhausting stuff nonetheless. And somehow Andrew didn't sit down to write a birthday balloon when everyone else did. So we waited and waited and waited.

And tomorrow his semester starts (mine started last week) so he's been puttering around the house with first day jitters, tidying things up, and he wanted those balloons down. But first we made him fill out a balloon and Rachel posed with it to show how appreciative she is: 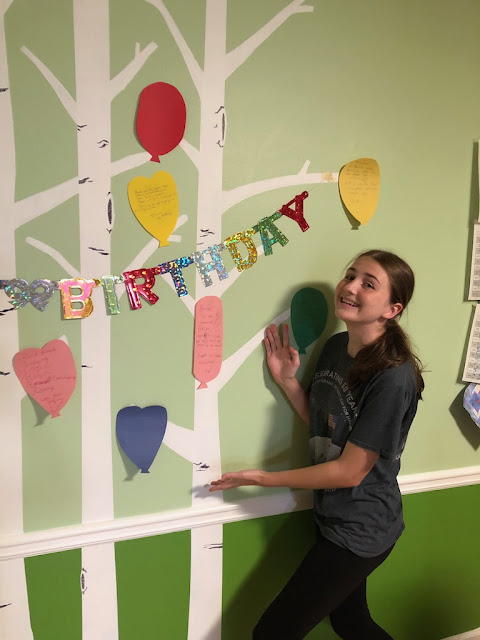 Let's see what we had to say about Rachel...

Though, the other day when I took him to the library with me he said, "It sure is peaceful going on a trip with just you! This is such a peaceful trip! There isn't even anyone to talk to! I don't know why you had so many kids. When I grow up I want to get a bug [a VW beetle] and I will only have three kids because that's how many can fit in the back seat and I think that many kids will be fine because the number of kids we have?"

Here he paused to give a little shudder.

"That's just too many kids! You should have stopped at three!"

"If I stopped at three, I would have you!" I pointed out.

"Hmmm...you should have stopped at three kids but had me first!"

"Easy! Zoë and Miriam! Because they know how to be quiet!"

"Well, what about Rachel? She bakes such wonderful treats. Without Rachel we wouldn't have half as many treats as we do!"

"What about Benny? He's always willing to play LEGO with you and you two have so much fun together! Plus, he's your only brother! What would you do without him?"

"What about Phoebe? She's our sweet baby! You love to hug her and she gets so happy every time she sees you!"

"Ugh, fine! Six kids! But I don't think there's room in my life for any more kids, okay? So this is fine for you, but I'm only having three."

"I think that three is a wonderful number of children. But I also think these are very big decisions to make at, you know, age four."

And this is completely beside the point, but the other day, he and Zoë announced that their greatest dream was to be like Matthew and Marilla Cuthbert—so they'd live together when they were grown ups, but never marry. And then they can just adopt children. (Or, Zoë said, "I'll marry a man, get some kids, divorce him, and then Alex and I will just raise them.")

I told them they might change their minds about a plan like that. Goodness knows my life plan shifted a bit between the age of 5 and 20 and then some more between 20 and now. I guess I just kind of go with the flow.

I can't believe you're turning 15!

And then she drew a heart composed of vaccine syringes and COVID particles because that's how she decorates everything.

Benjamin wrote two balloons—also in cursive—and used such flowery language that Rachel wondered aloud whether his syntax gets fancier when he writes in cursive:

Rachel, I love you because when we ask you to bake us a cake you fulfill our requests with such a creative manner.

Rachel, I love you because you are so good at Minecraft and I think that everyone should respect you.

Rachel, you are a great sister
And you're super funny and
Cool. You're a wonderful
Helper, and you're a really good cook.
Every day you get everything done. You are a
Lovely person!

Hi Rachel! You are turning into a genuinely wonderful person with your head squarely on your shoulders. You're talented, thoughtful, and intelligent, not to mention hilarious! Thanks for being a brunette. And for being a wonderful person to be around. I love you just the way you are and who you are becoming!

Rachel! You are A fantastiC Helper, wondErful cook, and alL around fun person to be around!

Clearly we were not at our most original while we were filling out her birthday balloons. As you've surmised, Rachel is a wonderful cook. She is feeling the loss of her beloved oven dearly, as are we all.

This evening Alexander asked if we had any dessert, and I said we didn't because I didn't have anything planned for dessert (but later Andrew reminded me that we had some leftover Rice Krispy treats from the day before, when we had Grandpa over for dinner and a movie, and dessert because it was his and Karen's anniversary and we felt there should be treats involved for that; so we had those because Alexander was just so sad...and because we, in fact, had them).

He pouted and then wrote me a cryptic note (not unlike his birthday balloon to Rachel). I recognized the possibility of a few words in his note, but couldn't quite make it out so I asked him what it said.

"It says, 'It does feel like no one likes me because there is no dessert."

Those were some pretty big feelings to be feeling, so Andrew recalled the Rice Krispy treats, and said that we could finish them off after we finished playing our game (tonight it was Guillotine).

Dessert was followed up by an impromptu water fight in the kitchen...

We were all thirsty from our dessert because, well, Rachel had decided to "drizzle" the tops of the Rice Krispies with peanut butter, except that she melted way too much and then it wouldn't really drizzle-drizzle; it poured. So there was a thick layer of peanut butter on top of the Rice Krispies, which tasted fabulous but was a little stick-to-the-roof-of-your-mouth-y.

So, Miriam was getting a drink from the fridge water, and then Rachel was in line, and then me. I tricked my way ahead of Rachel so was gloating a bit and she had a little bit of water left in her cup, so she flung that at me.

I jokingly threatened her with my cup, saying, "Really? My cup is full!"

And so she cried out, "Mom is threatening me!"

And I cried out, "She just dumped water down the front of my shirt!"

And then, well, things escalated quickly.

So I said something like, "What in the world?!"

And Rachel goes, "You started it!"

"Started it?! You threw water at me!"

"I didn't throw any water! I drank mine! Like a responsible adult! Okay, okay, okay! Enough water throwing," I said, stopping Benjamin and Zoë from continuing the water fight with their freshly filled cups. "Anyone who threw water had better be getting out a towel and mopping up this mess right now, ya bunch of wild hooligans!"

No harm done, really. Just...a free mop job on the kitchen floor...and a whole lot of laughter from those wild hooligans of mine.

Benjamin and Rachel got the wettest, so here they are showing off their wet shirts: 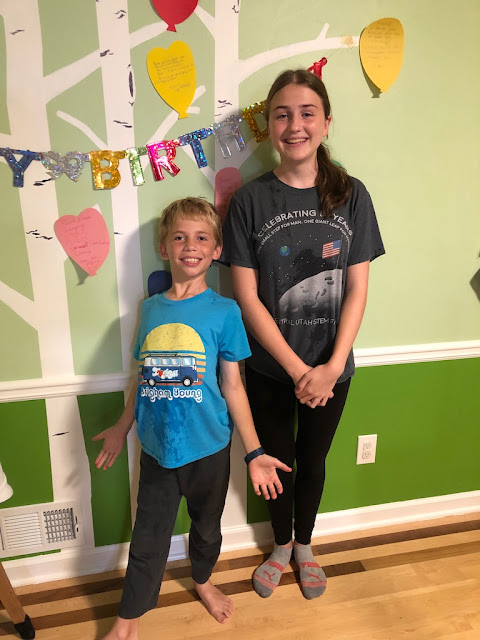 And now the birthday tree is bereft of balloons and the kitchen floor is the cleanest it's been all week!