Fall is in the air

I took Miriam to mutual the other night, along with all the little kids because mutual took advantage of the great outdoors, so I figured that I would let my kids play while she hung out at mutual and then we'd all go home together. But my kids wanted to participate in the activity—which was plogging (picking up trash while walking/jogging)—so we ignored the playground and helped pick up trash along the river instead (though we did our best to steer clear of Miriam and let her be with her peers...except, perhaps, for Benjamin...who will be her peer at mutual soon enough, anyway).

Mists were rising off the river and it was quite beautiful, inspiring, really. I'm surprised Zoë didn't make a note of it. She's hit a writing block and has been hankering for some good ol' fashioned inspiration to strike her. She even took her little notebook and pen on an outing with Grandpa earlier this week—where they got chased by ducks hoping for a nibble and impeded by great geese flapping their wings—but Grandpa had made her leave her notebook in the car so apparently she wasn't too inspired. She said she'll have to just copy down poems from Charlotte's Web and other places, since sometimes writing down poetry inspires her. She's pretty smart. But I'll have to remind her that she can write from the memory of a moment; she doesn't have to feel inspired in nature and sit down to write a poem just then.

(Update: She just now (at 11:53 pm) came to show me the poem and narrative she wrote about her outing with Grandpa so it looks like her writing block is over and I can cancel the lecture.)

Like these mists. I'll save them in my head for a poem another day: 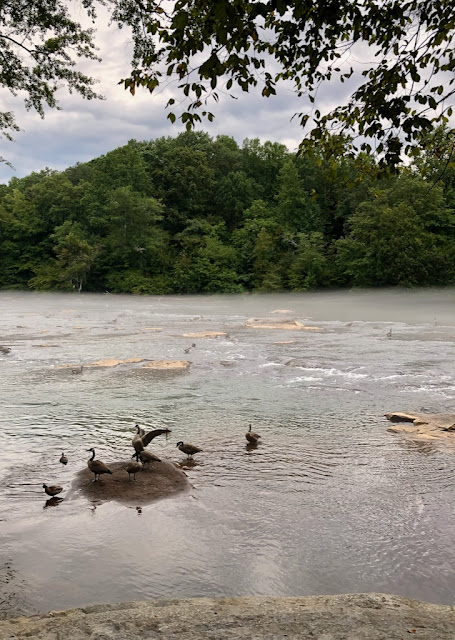 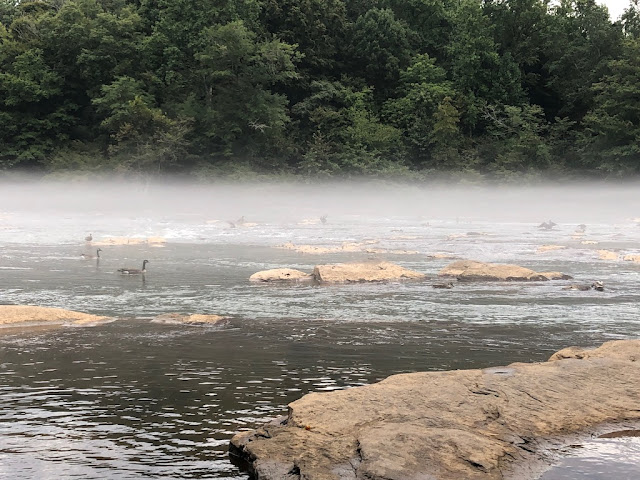 Anyway, Miriam and her friends were talking about what time they have to get up for school and it just so happened that of the three girls, only one went to public school. And, like, I'm not comparing or anything, but sometimes I do wonder if we've made the right decision to homeschool in the first place and continue to homeschool in the second place because...it's not always easy...and somedays I do wonder what it might be like to just pack my kids onto the bus with the rest of the kids in the neighbourhood, dust my hands off, and walk back inside an empty house (except that it keeps filling up with babies somehow...).

But the public schooled girl revealed that she gets up for school at 4:30 in the morning! Because school starts at 7:00 and there is early morning seminary beforehand and...let's just say that Miriam and Rachel are perfectly happy to not be on that schedule.

And I'm okay with it as well. Rachel stayed up late making banana-pumpkin bread, which she probably wouldn't have felt like doing if she had been up since 4:30 in the morning.

What's that you say? Yes. She made banana-pumpkin bread. In our oven. Because we have one!

It's big and beautiful and fully functional. I'll post a picture later, but for now just know that we're thrilled to have an operational kitchen again!

To "celebrate" having an oven again (1) Rachel finished making the peanut butter cookies she started a month ago; she froze the dough into pre-rolled balls so we just tossed them on a pan and we were good to go, then (2) we made "floor food" and settled in to watch the movie Luck.

Floor food is anything ready-made that you can toss into the oven for a movie night picnic—so little pizza bites and chicken nuggets and other such things of that nature. Not the best dinner, more of a fall-back plan, but one we haven't been able to fall back on for several weeks now.

As luck would have it, however, just as we were pulling up the movie the television suddenly went dark. It seems to have given up the ghost.

So we watched the movie downstairs instead.

But the movie was alright. I guess. I left early so I could agonize over my thesis proposal, so I'm not sure how it finished.

Is it weird that we're already feeling like it's fall here. And not just us. Like, the trees somehow seem to know that it's coming. I can see them getting ready to throw off their leaves like confetti.

My friends in Canada haven't even started school yet. One specific friend's daughter just held a lemonade and cupcake sale. And I was like, "Lemonade!? Costco is already selling pumpkin muffins!"

August should still be summer. But we are all anxious for fall. Even though I know it won't be cold enough for a sweater for weeks.

I ordered a couple of touchy-feely books for Phoebe. She's really been enjoying books with tactile pictures lately and we have a flight coming up and I want/need some solid activities to keep her entertained.

(Yes! We're flying out to Utah—just Phoebe and me—to see my family. And Andrew's family, who I include in my "my," because I wouldn't dream of visiting Utah without seeing his grandparents (who, again, I've known longer than some of my own grandparents, which still astounds me sometimes)).

One of the books that just came today is this one: 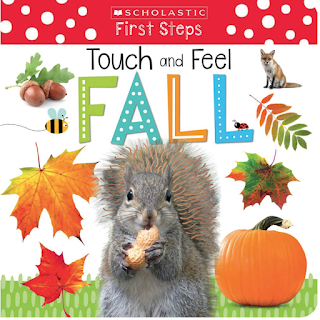 Somehow it ended up in Andrew's hands this evening while we were in the midst of our scriptures/prayer/bedtime routine. He was flipping through pages, appreciating the tactile features, when he asked quite seriously, "Is this a fall-themed book?"

Everyone else in the room burst out laughing—even Phoebe (who had no idea what was going on, but didn't want to be left out of the laughter)—because we could all see that the book is not only fall-themed....it's titled "FALL"...in big capital letters.

"What?" Andrew whinged. "It's not obvious! There's no storyline! I started in the middle. Sweater. Okay, a nice knit fabric. Bus. Shiny, corrugated grill on the front. Leaves. Crinkly. I didn't really get it until I got to the squishy pumpkin, okay?"

"No fair," Andrew said. "That book has a plot. This is just a random collection of words."

I'm not sure he'll ever live this down, honestly.

(It'll be his "books with words in sentences" story).