Not to brag, but, for the first time in about eight weeks, everyone at our house is healthy! And the girls are at the tail end of their coding class and didn't have any tutorials due today, so they joined us at the pool as well. It was fun to have all the kids there together.

The oldest four spent a lot of time playing in the diving tank. Zoë showed off her "unicorn dive," which from the deck looks like it's going to be a hot mess (especially since she biffed it while running on the driveway and scraped up her elbows and knees, so her hobbling on the deck was especially hobbly today), but which looks very graceful once she hits the water.

So perhaps it's really a narwhal dive. I doubt narwhals are very graceful on land.

(Note the hand being held up like a horn; that's integral to this dive's form).

I mostly spent my time hanging out in the kiddie end with Phoebe and Alexander, where Phoebe was splashing to "recharge" her sleeve so she could suck more water out of it (totally sanitary, I'm sure) and Alexander was practicing his strokes until...he announced that it would be easier for him to practice some of his skills in the big pool.

I was just waiting for him to decide that because when it's my idea he acts like he's dying.

Not today, though! Today it was his idea to cross the line into the big pool. He wanted to swim the length of the pool and jump off the diving blocks in the "deep" end (it's 4 feet) and I was totally on board with that!

So away we went!

Here he is showing off how he can jump in, recover, and swim to the side all by himself:

It also features the other kids doing other things, obviously. Benjamin is busy doing laps. Rachel and Miriam are entertaining Phoebe for me. Zoë is pretending to be an American alligator (which can live for two years without eating, even though she is getting a little hungry and could do with a snack).

I love how Benjamin talks about how many "Hobbits" he needs to do to fulfill his swimming quota. My kids have been terribly confused whenever I use the word "lap." For example, if I tell them they need to swim a 400 (that's 400 m), I will tell them that that is 16 laps. But then they want to know if a lap is the same as a length or whether a lap is swimming "there and back." The answer is that a lap is one length.

They have had a hard time wrapping their head around this concept. So Benjamin came up with his own unit of measurement—the Hobbit. We already use this for one of our walking routes, the there-and-back-again principle, so it was easy to adapt it to swimming. And it's easier for Benjamin to keep track of 8 Hobbits, rather than 16 lengths/laps. So all the more power to him. But, just know that's what it means when he talks about how many Hobbits he has left to swim—it's how many there-and-back-agains he has left to do.

Alexander could still definitely work on his technique, but who doesn't?
He struggles to remember to kick his legs and move his arms and blow bubbles and float and...so many things to do at once!! So you'll see that sometimes his kick looks fabulous, while other times his arms do, but they never quite look fabulous together. And that's okay.
I'm just glad that he decided that he could swim in deep water, rather than simply sinking like a stone, and also that he finally figured out how to flip onto his back to rest when he needs to (he had so much trouble learning to flip over and I don't know why because he can do an excellent corkscrew glide (spin, spin, spin) in the shallow end. But getting him to flip from his stomach to his back in the deep end?! It was like pulling teeth! He was completely convinced he couldn't do it and would just sink right to the bottom (which is weird because he doesn't sink in the shallow end).
At any rate, he's over that fear now and is swimming like a champ: 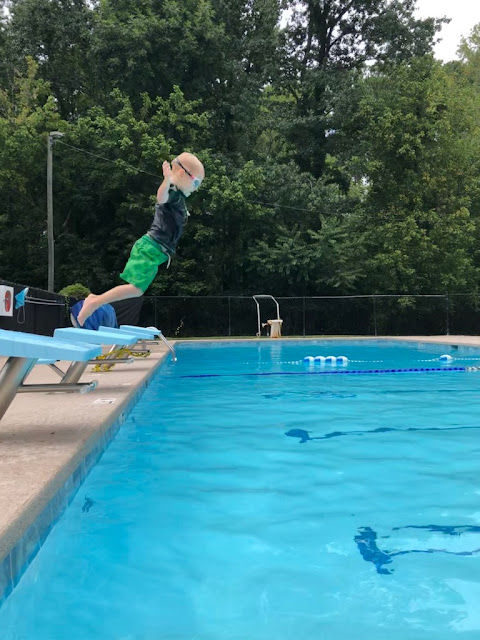 Here's Benjamin jumping from the block: 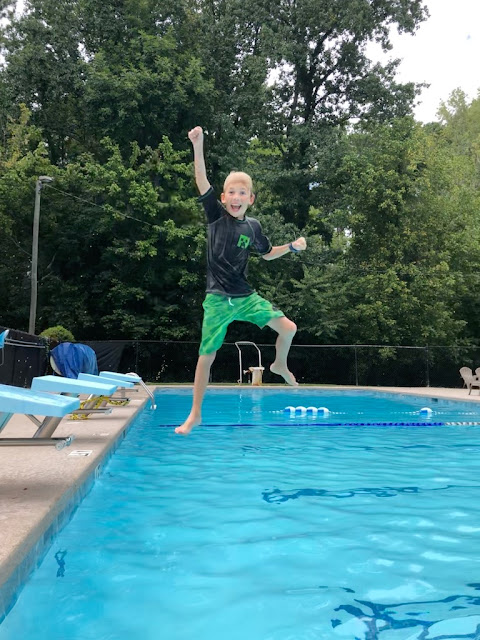 Here's Zoë, the slightly-hungry American alligator, resurfacing from the bottom of the pool: 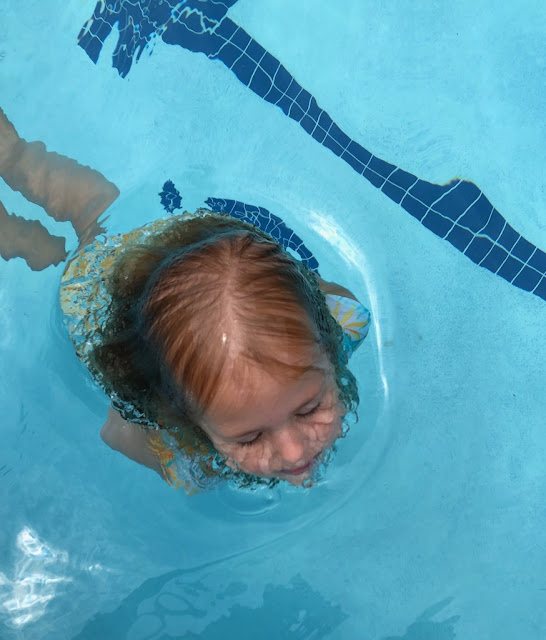 And here are Miriam and Rachel with Phoebe: 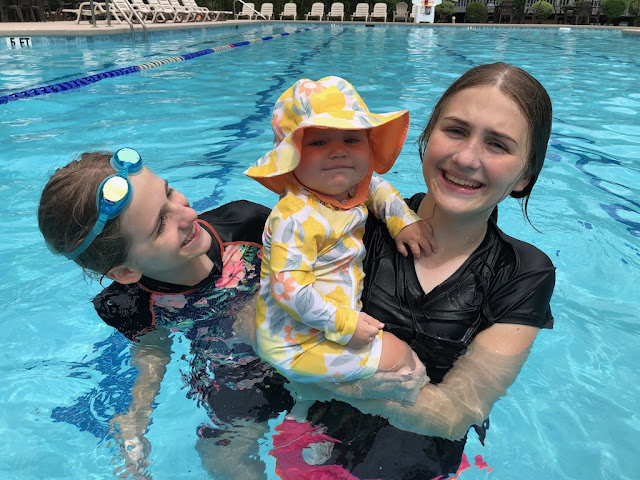 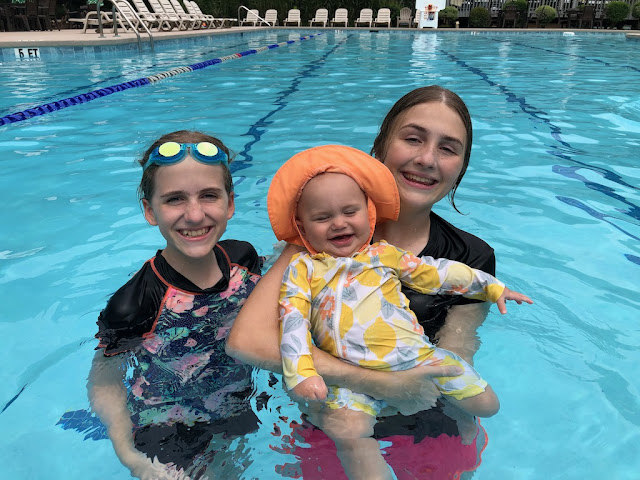