At church today, Andrew was holding Rachel the way Rachel likes to be held: so that she can observe everything. 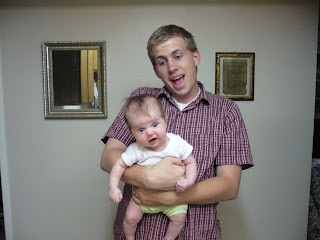 Sister Lundquist remarked, "She's such a little thing--you hold her like she's a big girl. You won't do that with child number three. You'll want that baby to stay a baby, so you'll hold it like a baby."

In our defense, Rachel likes to hold up her head. She's been doing that for weeks. And she likes to be facing the world, not someone's shoulder. It's just part of who she is.

It's not that I want her to grow up fast. Not at all. On the contrary, I think she is growing up too fast. I don't want her to move up a size of clothes (she just about has to), nor do I want to take her to get her 2 month shots (because that means she'll be two months old), nor do I want her to cut teeth or eat pablum or drink juice or figure out that she has control of her hand movements.

But she's well on her way to doing all that stuff.

As happy as I am when she reaches a mile mark in her development, like blowing bubbles--she can blow bubbles!--or moving her arms and legs rhythmically, it also makes me very sad.

I think my friend, Val, can relate. When I babysat for her, Sawyer was about 4 months old. "He likes to practice standing..." she said.

"Yeah," she said in a sad voice with a pouty face, "he does. He's been doing it for months. He just likes to. I don't like it."

And at FHPEM (Family Home and Personal Enrichment Meeting) this past week, Sawyer got up on his hands and knees and started rocking back and forth (he's now 6 months old). Val smacked my leg,

"Look at him," she gasped, "He's never done that before!"

She encouraged him for about two seconds, fighting herself back, before she gave in and lifted him onto her lap and cuddled him.

I understand the struggle she went through. Where do you draw the line between encouraging your child and forcing your child to grow up too quickly?

Part of me wants Rachel to stay little forever. The other part is excited to see her grow up. I suppose the best solution is to treasure every minute I have with her so that I can enjoy her at every stage--when she's little, and when she's big.

Yay for upside down time 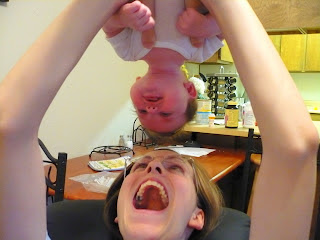 And as for keeping child number three a baby...well, I'm just not sure that's even possible. You have all these little helpers giving their two bits about how the child should be raised. Patrick, for example, was fed onion rings when he was Rachel's age, and no matter how my mom pleaded the onion ring feeding continued. And then there's the fact that younger children maintain a constant effort to catch up with the older children. They walk sooner, talk sooner, and want to go to parties sooner than the oldest ever did. Josie sill compares herself to me academically, even though I've graduated from university and she's in junior high (oddly enough, I do get pre-algebra math better than she does).

Rachel does still like to be swaddled. If we lie her down and want her to sleep for any length of time, we have to make sure that her arms can't fly up and hit her in the face (they do that sometimes, right when she least expects it), so we wrap her up nice and tight. That's a small baby thing, right?

No matter how I try to stop her though, she's going to keep growing up.
Posted by Nancy at 9:07 PM