How many bad haircuts can I give?

Yesterday Andrew and I wore the matching BYU shirts that his parents gave him (rather, us) for his birthday. It was also the homecoming football game--which we neither went to nor watched on TV. In fact we had no clue who won until we went to the ward party and everyone kept asking us if we went to the game. Apparently it was a good game.

You will notice in this picture how ruggedly handsome Andrew is. I haven't cut his hair for a while now...at least since the beginning of July. In my humble--but amazingly accurate--opinion, Andrew looks nice with longer hair. He looks older, more sophisticated, and also kind of rugged, but that's just because he doesn't agree with me and my favorable opinion of his longer hair style, so he leaves it messy just to bug me. He enjoys his hair when it's so short that even if he sleeps on it funny it doesn't stick up anywhere because it's just too short to do anything with. 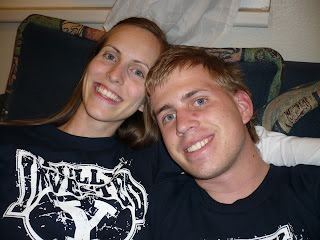 I caved. I'm always the one to cave in a battle of wills. I don't see it as a weakness...not exactly...it's more that I just want to make the other person happy and/or stop griping.

So I finally agreed to cut his hair--but not too short.

Famous last words, I guess, because I haven't ever quite figured out how to cut hair so that it stays longish. One day I should experiment with scissors because if I happened to mess up, I could always buzz it after, right? For now though, the only hairdressing job I'd ever get is one with the military. 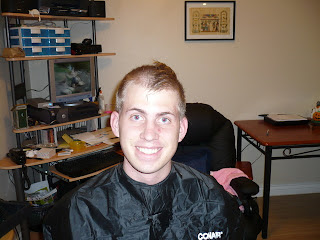 For future reference, 3/4 of an inch on top is much too short, regardless of anything Andrew says. Rachel's hair is now like 10 times longer than Andrew's. 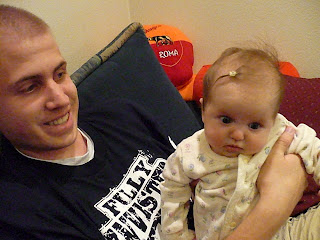 And to think, I just found his favorite comb the other day. What a waste of a find--no wonder it lost itself before! It never gets used. Instead it sits idly by, gathering dust.

At least we're mostly happy. I'm happy that it will only take Andrew's hair a month to get to be the length I should have cut it to. He's happy that I cut it too short. Rachel's just happy. It looks like the comb is the only one who could use some cheering up. 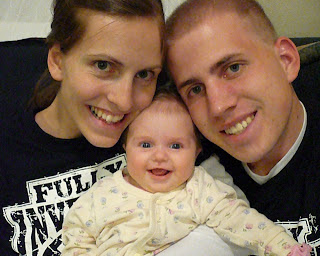