One of the first things Uncle Bruce, mathematician extraordinaire, said to me was, "Hey, Nancy, wanna do some crazy math problems, just for fun?" 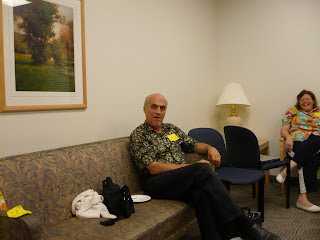 And thus began our marathon party, full of emotion, drama, pizza and fruit trays (courtesy of Bruce & Sara), and, since no party is complete with out it, a dizzying number of medical terms being tossed about.

At around 2 am a nurse came in to tell us that dad was doing alright. At this news, Patrick took Josie and Rose home so they could go to bed, leaving all the "adults" waiting for a little pager to beep, informing us that dad was "ready" for visitors.

The doctor/surgeon said it would be about 45 minutes, but if they didn't page to call.

We played the "triangle game" for a while, greatly confusing everyone. Follow the link, and you'll know the secret...but don't tell. We played it a little differently, but it's still fun. In fact, ours might have been a little more fun since it kind of involved math. 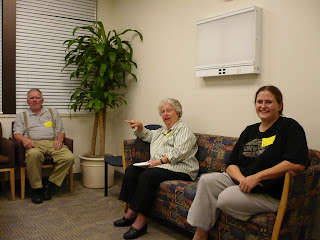 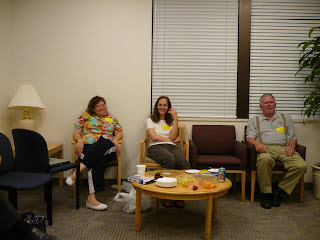 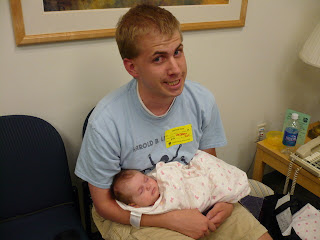 After 45 minutes everyone was thoroughly befuddled and we debated calling someone but we weren't sure who to call. No one had told us.

"Just call the number on the pager," Andrew suggested.

"Oh, yeah," said Uncle Bruce, "That way the pager will beep and we'll know it's time to see him."

So, maybe calling our own pager wouldn't work so well. Mom called the operator instead and we went up to the cardiac ICU waiting room.

As we were leaving, Andrew said, "I've never seen adults get hyper before...I thought it was just us and we were immature, but everyone was getting pretty kooky."

I suppose that is what happens when you stay up 8 hours past bedtime--that's like a whole day!
Posted by Nancy at 10:19 PM