Talk about your classic lame-dash-o

Mom and David came to visit me after work today, which was nice because Andrew worked late tonight and sometimes it gets a little lonely with just Rachel and me, even though she's rather cute. 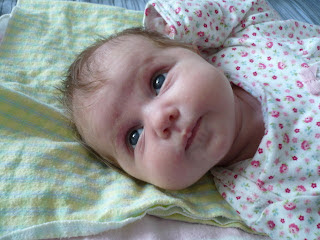 Mom held her, and then David took her. Rachel was naked (she had a blow-outy day and after the first two outfits I decided to just keep her in a diaper), allowing them to view her in all her slender glory.

It's true. She's 23.5 inches tall...and is about 9.5 lbs. Of course, this is me doing the measuring using my tape measure and Karen's scale so I'm not sure how exact they are. I also have no idea what percentile she's in, but she really is tall and skinny. She doesn't fit in 0-3 month clothes yet because the neck hole is much too wide, but she hardly fits in the "just born" clothes anymore because she's so tall that when her diaper gets really full the snaps come undone.

"Well, I don't think she'll be coxos*...how do you say that word in English?" He paused to take a few minutes to translate.

My mom walked over and took Rachel. "I don't think you should be able to hold Rachel if you're going to be calling her mommy lame," she chided, mockingly. I don't think she was sticking up for me, I think she just wanted the baby back.

"No," he explained, "I mean, I don't think she'll have problems crawling or walking. Her legs are so strong!"

Rachel really does enjoy standing up though. She has great head control for her age and loves to have goof-around time with her daddy. 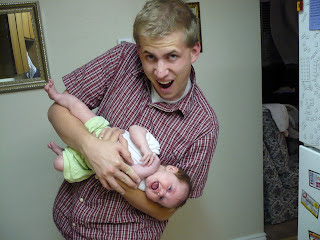 She also won't sit in her bouncy chair. She prefers to stand up--with one push of her legs she almost topples the chair. Those warnings of "never leave your child unattended" really apply to our little baby since she will roll over or stand up when you least expect it. You're only 6 weeks old, Rachel, simmer down. 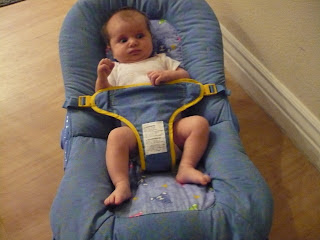 Almost falling out of the chair 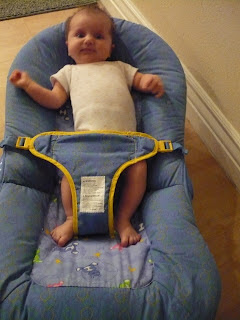 This one was just cute 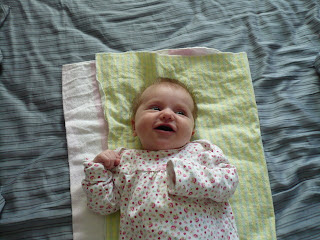 I had something wrong with one of my legs and wouldn't put any weight on it. If I had to crawl on it I was scream in pain. If I had to stand on it I would scream. If I tried walking I would scream. That is probably why my parents were really surprised when, in the middle of the night, I stood up in my crib and bit my dad's toe, which was dangling over my crib bars (April 8, 1986).

My mom had an appointment with a specialist in Calgary so that he could look at my legs to see what was wrong. This was something my family really couldn't afford at the time, but I had something wrong with me so it had to be done. Right before the appointment (I'm not how long...a few days, or a week) I started walking like everything was normal, so we canceled the appointment and I've been fine ever since. Wonder of wonder, miracles of miracles.

I don't think our little one will have the same problem. 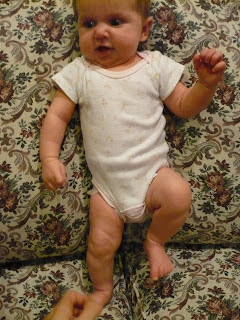 *David was trying to think of Matt. 11:5 in order to remember the word "lame," but he could only remember it in Portuguese: Os cegos vêem, e os coxos andam; os leprosos são purificados, e os surdos ouvem; os mortos são ressuscitados, e aos pobres é anunciado o evangelho, which is why he called me coxos.
Posted by Nancy at 11:11 PM