Happy Birthday to You, too!

"Happy Birthday, honey," I said as I prodded Andrew and urged him to get out of bed.

"Happy Birthday to you, too," he said dreamily, then turned over, still in deep sleep.

He's quite the sleep talker, so his mistake is understandable (and quite laughable). But I'm not sure what his excuse is for this evening when we were coming out of Winger's and I said again, "Happy Birthday," and he replied,

"Thanks! Happy Birthday to you, too."

His tone was the same tone that you use to say, "Good. How are you? Good," without really waiting for a reply--the niceties you say, even if you don't truly want to wait for the answer.

This time, though, was funnier because he heard himself say it and started laughing when I said thank you back to him, hardly noticing that it's not my birthday at all.

Andrew had a good birthday, anyway, I think...I haven't asked him.

I just asked him. He nodded and said, "Yup," so I suppose it really was good.

Rachel and I couldn't think of what to get him. When I talked to Val about this she said, "Joel's birthday is coming up, too. I just ordered him some movies on Amazon--you can get them for way cheap."

So that's what we did. I don't know why we didn't think of it before since I've certainly used Amazon plenty. Needless to say, his present isn't here yet since we just ordered it last night (and there's no way we were paying extra for expedited shipping). Instead, we made him a nice card.

Today was really like any other day though. Andrew got up and went to school and work while Rachel and I stayed at home, played with friends, and baked a cake--only we don't typically bake cakes so it took quite a bit of convincing for Rachel to agree to help me.

Mommy's little helper (sleeping, as she should be) 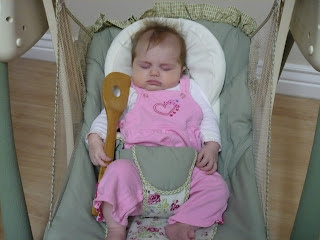 I was feeling creative so I made a Lego block cake. It was harder to make than it looks...but it was kind of fun, and I guess it turned out alright. It's a regular cake on the bottom with cupcakes stuck on top. I got so much cake in the icing that I may as well have caked the ice instead of iced the cake, and it's quite a bit lopsided because all of my cakes rise really high in the middle, but not so much on the edges. I've never been able to figure out why. 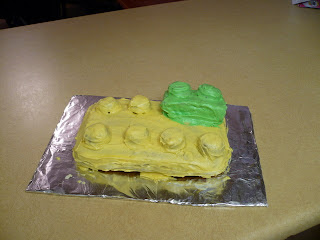 In addition to baking a cake, the day was unusual because I didn't have to fret about what to make for dinner. Instead, Andrew's parents took us out to dinner at Winger's. I love that restaurant--mostly, I just love their barbecue sauce. Last week, Andrew's parents asked him to choose a restaurant to eat at for his birthday. He naturally turned to me and I said, "Oh, no, I'm not deciding. You are." But then I decided anyway... 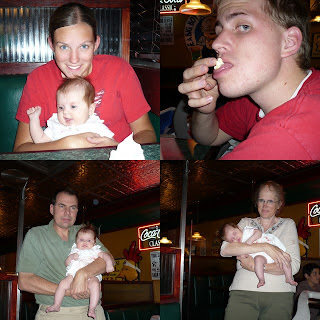 Rachel was very well behaved until she messed her pants. After I got back from changing her diaper, she just wanted a few simple things like to be held, oh, and for whoever was holding her to be standing at all times. Lucky for me, by the time I got back from the restroom our meals were at the table and everyone was half done eating. That means that everyone else held Rachel while I scarfed down my meal. I am such a slow eater, so it's a good thing others were willing to hold her, otherwise it would have taken me twice as long to eat!

When I finally finished eating (probably twenty minutes after everyone else) we went over to our place for, as Andrew put it, "cake and everything." Really, it was just cake because that's about all we have to eat in our house right now...that and carrots and tomatoes and milk. 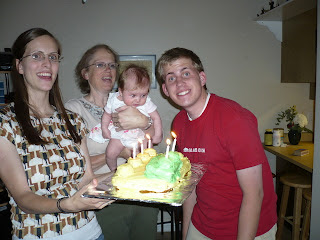 We ate cake and then Andrew's family left so that Emily and Reid could work on homework. Not soon after they left, my family showed up so we lit up the cake and sang to Andrew again, making his birthday twice as happy. 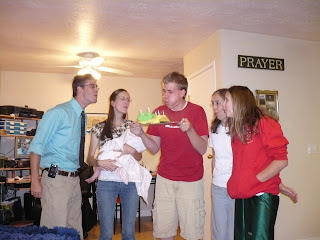 Now both families are gone, leaving our little family all alone to do homework, feed the baby, edit Andrew's papers, feed the baby some more, blog, feed the baby, have scriptures and prayer, feed the baby, put the baby to bed, go get her and feed her again...you get the picture. Now we're hoping that this is the last feeding before she goes down for a nice, long, all-the-way-through-the-night sleep (Rachel's personal birthday gift to dad).
Posted by Nancy at 12:01 AM