Dad was discharged from the hospital yesterday afternoon. He had a pretty rough night; he wasn't able to get comfortable. Of course, hospital beds aren't all they're cracked up to be, either so he wasn't very comfortable in the hospital, either.

He seems to be doing pretty well though. The skinny on what happened is that it wasn't a heart attack. He had an aortic aneurysm on his main artery that, to quote Mom quoting the doctor, "ripped." It was splitting apart in the direction of the blood flow, so with every heart beat it would rip further. According to Dad it hadn't ripped when they found it. I'm not sure who is right, but it's a pretty scary thing. They usually don't cause any problems until they break...and then you typically bleed to death shortly after.

It was a sequence of miracles that they found the problem when they did. That's for sure.

Andrew and I went over to daddy-sit while Mom went to work for a while this evening. We all had a nice Relief Society dinner together. Dad finished first, since he hasn't been eating very much lately, and excused himself from the table. He stayed in the kitchen talking to us and we were all enjoying each other's company when Dad suddenly started clutching at his chest and stammering, "My heart! My heart! My heart! Where's my heart?"

I think we all went into a little bit of a panic. After all, this time last week we were all waiting to see if Dad was going to live or die.

Mom scurried out of the room and gently chucked a pillow at Dad. It landed near his feet. He scooped it up and commenced to cough while squeezing the pillow in a certain way that prevented his chest from splitting open and spewing his heart across the room (for which I am eternally grateful--that would have been gross and traumatizing).

It was, indeed, his heart that was missing...just a fluffier, less necessary heart than the one I was thinking of when he first was grasping at his chest. I just about had a heart attack thinking he was having another heart failure. When I realized which heart he was talking about, it was pretty funny...I guess. 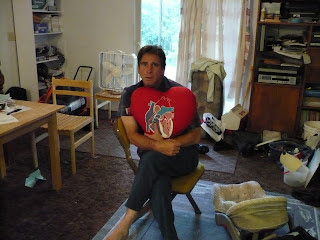 So, aside from a 10 inch wound and a bunch of broken ribs where they accessed his heart, some puncture wounds to help drain the blood, and bruises on his leg from ripping out a vein to repair his artery, Dad is really doing alright. He's not supposed to drive for eight weeks and we're not supposed to leave him alone for a couple of days, but he's really doing quite well, considering all he's been through.

He's starting to make some changes in how he lives his life and how he treats his body--he doesn't really want this to happen again.

I have taken this as an opportunity to evaluate my familial relationships. I've making an effort not to get upset over petty issues (like math homework). After all, you never know when someone's going to go and rupture their main artery on you.
Posted by Nancy at 11:51 PM