Today marks two years of Andrew and I being "together." Two years ago yesterday, Andrew arrived in the Salt Lake City airport, very late at night, from his two year mission in Rome. Two years ago today, Andrew took me on our first post-high school date. The date was special. We talked about zone conference--which was thrilling. I accidentally touched his knee with my foot when I was crossing my legs and he just about jumped out of his skin. When it was time for us to part, he pulled up along the curb of my house and said, "Well, bye."

Yes...it was love at first sight.

Two years ago tomorrow, Andrew went on a date with Stormie and white-lied about it to me while asking me out on a second date. Oh, that Stormie.

Two years ago the day after tomorrow (which was Saturday back then), we went on our second date. It was supposed to be a triple date. Stormie's date didn't show, so the date ended up being me, Andrew, Stormie, Ross, and Anna. Oh, that Stormie.

Because Andrew and Ross were really good friends and Stormie is Ross' little sister, Andrew tended to "cling" to her because she was "safe." He knew he didn't want to date her. I didn't see that though, so I was probably rather jealous. Ross and Anna all but ignored the rest of us since they were already hopelessly in love, so Andrew and I would have been able to spend a lot of time together, were it not for Stormie. Oh, that Stormie. On the way home from this date, Andrew remembered to walk me to the door, but he did use the "do you have a scripture marking system?" line on me in the car.

It was love at first sight, really.

Sunday was his homecoming. I sat so that he wouldn't be hidden by the pulpit since he was sitting on the stand and I was sitting in the congregation. Stormie is a rather tall girl. She sat diagonally between Andrew and me, completely blocking my view of Andrew's smiling face and leaving me to sulk at the back of Stormie's head. Oh, that Stormie.

We went to a fireside that evening together (with David) and really hit it off. This time we dropped Andrew off and so by the time we got home, Andrew already wanted to see me again. Just as I was taking off my shoes, the phone rang.

"What are you doing right now?" asked Andrew, nervously.

"Well...uhhh...my dad wants to know if you can come over and play games," he spat out.

Yes, it was definitely love at first sight.

Andrew was charming. And Stormie...well, I have no problem with Stormie now that she's married, too.

The rest is history. Here we are, two years later as in love as ever and completely Stormie-free.

To celebrate, I made a pie. At least, I started to make a pie. While I was making the crust, however, I realized that we don't own a pie tin. We have three 9" cake pans, a few oblong dishes of varying measurements, two bread loaf pans, a rosette bunt thing, and approximately 7 muffin tins, in addition to a wonderful array of cookie sheets. But, no pie dish.

We opted to use a 9" cake pan since that was the dish that most closely resembled a pie tin.

With that problem resolved, I started the caramel glaze and continued to work on the dough. I had used whole wheat flour instead of white flour, so I had to add an extra egg and some water to get it to be wet enough. Just as the caramel started boiling and I began to press the dough into the cake/pie tin, Rachel's patience began to wear mighty thin.

I sliced the apples as quickly as I could and took the caramel off the stove. After latching Rachel on, I successfully fed her while I finished pressing the dough into the pan. I coaxed her to finish eating, but she would not give in so I forced her off and gave her to Andrew.

By this time, my caramel had all but solidified so I warmed it up again and added some milk...it still just globed on top and just didn't end up looking all that nice when it came out of the oven. I'll have to practice more often--it's a good thing we celebrate two Thanksgivings in our family. Perhaps one day I'll even invest in a pie tin. 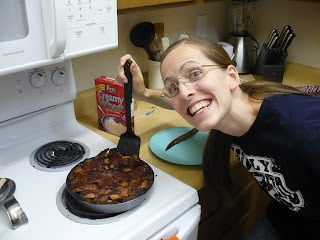