Occasionally Karen goes to IKEA, and occasionally she'll bring us back a souvenir. A little while ago she gave Andrew some Swedish cookies--Anna's Almond Cinnamon Thins. They're good. They're Swedish. I never thought anything of them otherwise.

On a semi-unrelated note, Patrick phoned me during BYU's homecoming week. He asked a girl to homecoming and I helped him plan his date (Jacob is to call Patrick next time he needs to plan a date). Patrick antagonizes over every little detail and will drive everyone nuts asking them for ideas. When he is planning a date, he calls me like 10 times a week! It's like we're best friends...until the date is over...then I feel kind of used.

Anyway, this time he was at Macey's and he was wondering where to find the Smucker's premade PB & J crustless sandwiches. Not being an expert on the layout of Macey's I couldn't help him. But he did tell me that he found "those pancake cookies." Not having a single idea of what he was referring to, I said, "Oh...those pancake cookies...?" with just enough reflection to let him know that I was completely clueless.

Of course I do--I remember when they built it, although I didn't live in High River at the time.

Having seen the factory numerous times (it's not five minutes away from my sister's house) but not knowing what kind of cookies were produced there, and not fully understanding what Patrick was trying to describe, I just said, "Oh...those pancake cookies...?"

Now I knew that some flat, thin cookies like pancakes with blueberries in them existed...and that they were made in High River. Go figure.

Fast forward a few days and there is now a box of Anna's Almond Cinnamon Thins sitting on my kitchen cupboard. "Are those the High River cookies? Can I have one?" Josie asked. "Oh, you found almond flavored ones?" my mom asked.

Hmmmm...I flipped the box over and read the back for the first time, ever. Sure enough, these Swedish cookies are made in (one of my) hometown(s). 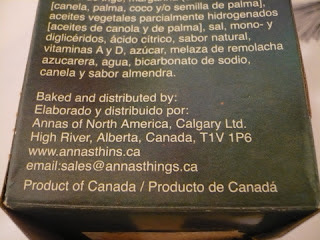 Secretly, I've always wondered how Anna's Thins has been surviving High River's economy. I guess I just thought that Anna's was a small business. A lot of the small businesses in High River have been driven out by larger chains stepping in (either directly in High River or in neighboring Okotoks). Anna's just looks so small, dull, and innocent sitting out there in the countryside that I didn't see how it could possibly make enough income to continue operation.

For now, I think I will just have to console myself by eating a few of those scrumptious cookies and relish in the fact that they make my hometown famous.
Posted by Nancy at 12:15 AM