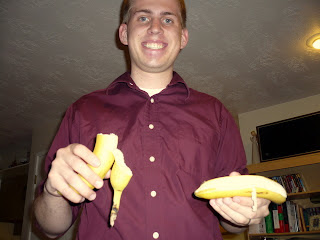 I looked into the kitchen from my perch on the couch. All I could see were the bananas.

"I want a banana," I said decisively. I hate making decisions.

He got a banana, held it by the stem and flicked it. Normally this would have opened the top of the banana and allowed him to peel it like a normal human being. Being a little overripe for my taste, the banana peeled all the way down to the banana butt and then flew out of the peel and careened across the floor, leaving Andrew holding a long strip of banana peel.

"Oh," he said with a hint of sheepishness and amazement in his voice, "I'll eat that one."

He then grabbed the second, and last, banana from the counter. Not wanting to repeat his previous mistake, he held the banana by the butt and pulled the stem down. Normally the peel would have separated and he could have gently derobed the banana. Using a little too much muscle power, Andrew snapped the banana in two. This banana was also a little ripe for my taste, but I ate it anyway.

I guess he just doesn't know his own strength.
Posted by Nancy at 11:25 PM