The first night Rachel slept in her own room, I had trouble falling asleep. It was hard for me not to be able to hear her gentle breathing right beside me. I did fall asleep eventually though and neither of us woke up during the night.

The next night we made the leap from the bassinet to the crib. She slept all through the night again, although I didn't quite make it. She started making fussy noises at around 3 am but never got very upset, so I ignored her and we both went back to sleep. Then she woke up howling just before 7 am. When I went in to get her she was perfectly perpendicular to how we'd laid her down the night before. I was wondering how she had managed this mathematical wonder until I noticed that her legs were dangling between the bars of the crib. She was stuck right up to her thighs.

Obviously she wasn't going to comfort herself on this one, so I got up to check on her. She was once again completely perpendicular to how we had laid her down, but this time she was on her side and both of her legs were stuck between one of the sets of bars. She was doing this wild bucking bronco move and I was afraid she was going to snap both of her legs in two, so I took her out and brought her in bed with us to feed her. We both fell asleep quickly and didn't wake up until it was time for Conference.

Last night I was extra careful about tucking her in. She can only roll one way, so I put her head on the opposite side of the bed so that she would roll toward the wall instead of to the outside of her crib, hoping that this way she wouldn't be able to get her feet through the bars. I got out the big quilt that Karen made for her and tucked it way under the mattress, hoping that Rachel wouldn't be able to kick it off.

Luckily she slept through the night, but when I went to check on her this morning, I saw that my tucking-in job had been futile. She was completely free of her quilt and huddled up in one corner of the crib. Her legs were freezing--we had put her in a nightgown since all of her footed pyjamas were in the dirty clothes basket. She only had one sock on; the other was wedged between the wall and the crib somehow. At least she had gotten her leg free. 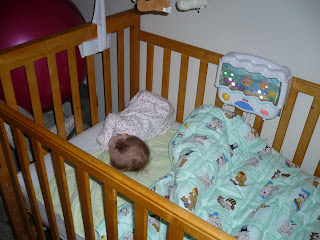 We looked at bumpers last night on eBay and found one that we both liked, that was relatively cheap. She is such a little wiggle worm that we need something to keep her inside the crib.

It's hard to know what to do as a parent though. Nowadays they are encouraging parents to have absolutely nothing inside the crib: no blankets, no pillow, no toys, no bumpers. Basically just nothing. What you're supposed to do is put the baby in a "wearable" blanket so that they can't accidentally smother themselves with it.

You're not supposed to use bumpers because the latest "trend" of thought is that breathing recycled air can increase the risk of SIDS. Apparently bumpers can reduce the amount of air flow to your baby, or something like that.

Besides, they're now thinking that SIDS may have something to do with genetics. Who knows what they'll come up with next? Sometimes I think they just want to see what they can make parents do. First it was stomach to sleep. Then back. Then sides. Now we're on back to sleep again. Pretty soon they'll be asking us to have our kids sleep standing up.

For now, I think I'll just get that crib bumper and see if it helps keeps all of my baby's limbs in the crib allowing both of us a good night's sleep.
Posted by Nancy at 10:54 AM