Hi, my name is Nancy and I am an infansolihypnophobe.

The time has come to let my baby venture off into the world of sleeping in her own bedroom. I don't want to. In fact, I dread it. I've classified it as a phobia since it is an irrational, obsessive, and persistent fear of mine. There isn't anything frightening or perilous about sleeping in your own room, after all--so it's pretty much an irrational fear. It's obsessive and persistent because ever since we brought her home from the hospital I've woken up in the middle of the night just to check on her, and the one night we wheeled her out into the hallway (because she was grunting so loudly all night long) I was on the brink of hysterics.

It's time for me to get over that though. I mean, look at her: 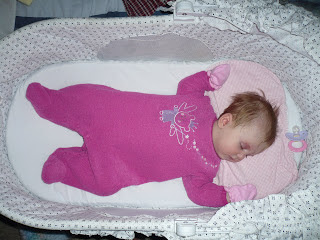 Her head and feet are just mere inches away from touching the sides of the bassinet. Whatever happened to this little baby? 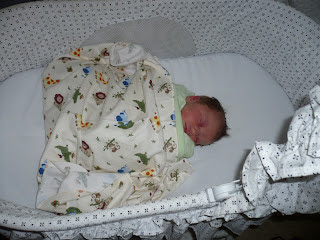 Tonight we are wheeling the bassinet into her bedroom to see how we both fair after a night of separation. I'm sure she'll do fine; she's a good sleeper. It's me I'm worried about. If only we could get the crib to fit in our room....Somehow I don't think that's possible.

Rachel is growing up in more ways than one. Not only is she getting taller (I just folded up her itty bitty onesies and put them in a box *sniff, sniff*), she's getting smarter, too. She's all but tamed her pesky hands and can keep them from flying up and hitting her in the face--now she can look at them and put them in her mouth and she's starting to realize that she can grab things, too.

She is constantly trying to sit up and roll over. I turned my back on Rachel for one second today so that I could put my viola away. I put her down on her back, but when I turned around I saw this: 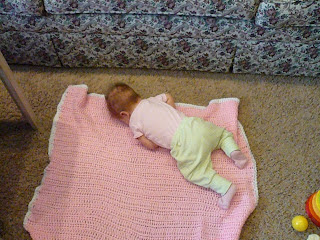 She went and rolled over and didn't even let me watch! She's been trying to do this for quite some time but would just get stuck on her side and then flip back onto her back suddenly. But she really can do it now (sometimes). I tried to get her to do it again, but she just lay there smiling--she wouldn't even try to roll again. It was like she knew she did it and she wasn't going to do it again to please anyone.

So I put her on her side (which is halfway to her tummy) to see if it would encourage her to try again. It did, and she rolled the rest of the way over. Maybe someday soon I'll be able to catch her doing a full-fledged roll.

Where do babies learn these things, anyway? I understand how they learn how to talk--by mimicking grown-ups--but did she just think one day, "I wonder if I can roll over?" She certainly didn't get the idea from us. Andrew and I don't go around rolling over all the time. There was that one time she watched Sawyer do it, but where did he learn it? I don't think his parents roll over all the time, either. I guess there is a lot to the "nature" side of things.

Now I wish that I could go back to school and study psychology. I love child development and psycholinguistics and all that fun stuff. Maybe one day...once Andrew graduates and we're settled a little more. And by "settled" I mean "have some kind of a future game plan."

Shoot, I could become an expert on how to diagnose and treat infansolihypnophobia in mothers all over the world. I could write books on the subject and create a 12 step program.

First, though, I should probably successfully get over this phobia myself.
Posted by Nancy at 11:41 PM