My baby seems to have a bit of a cold. It's really no wonder. Emma, the girl I babysit, has had a runny nose. The twins downstairs have had colds recently. It seems as if every nursery aged child has been a little sick lately.

Luckily she doesn't have a temperature and isn't incredibly grumpy; she just has a pathetic little cough and a terribly stuffy nose.

Yesterday she was very sleepy. She napped almost all morning and all afternoon--whenever I tried to wake her up, she would have nothing of it. She would either scream until I fed/rocked her to sleep again, or she would simply sigh and fall back asleep.

I figured she just wasn't feeling well and since I like to sleep when I'm not feeling well, I just let her sleep. She slept away most of the morning while I ran some errands. Then she woke up in the afternoon starving so we spent the majority of the afternoon alternating between breastfeeding and trying to use the bulb syringe on her nose--which I hate almost as much as she does.

Finally at around 8:30 pm, Rachel woke up in a good mood. She was ready to play. I was happy she was feeling better, but we usually try to start winding down around 8:30--not play. She kept trying to initiate play though, so I played with her for a bit and read her some stories. We had a good time, but I was starting to feel like it was time for me to go to bed.

I put her down at around 11:00 pm, after feeding her. She was still awake, but acting a little drowsy, so I hoped that she would just fall asleep. I checked on her about 10 minutes later and she was still wide awake, staring at things in the room, but happy--so I left her, still hoping that she'd just put herself to sleep.

She started fussing, but not very loudly like she does when she wakes up in a dark room by herself--just kind of whimpering. I left her, whimpering, for 10 minutes. She still wasn't asleep when I checked on her. She wasn't hysterical, either, but when I looked at her, I had to pick her up. She has this amazing teary-eyed smile that just melts my heart, every time.

Her face was so tear-stained (even her hair and sheets were wet from her tears), but she looks up with her big round eyes and gives a nervous little smile--which she, of course, wouldn't do for the camera, but here she is all blotchy-faced and almost happy. 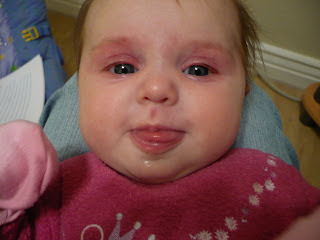 So I got her up again...and we waited for Daddy to come home. She was still all kicks and giggles by the time he got home and although we went to bed at around 12:30, she didn't make it into her bassinet until around 3 am!

I'll probably need to start being more hard-nosed about her so that she doesn't goof off around bedtime, but really, who can be hard-nosed to a sick 2 month old baby? Not me, that's for sure!
Posted by Nancy at 11:24 AM