Two tags for you. The first is an "8" tag from Lydia. The second is a picture tag from my sister; actually it wasn't really a tag but she kind of made it sound like a tag and I thought it would be fun to share, so...

Eight Favorite Shows
1. The Office (the only show we watch here--we ordered it on iTunes as a little treat for ourselves)

Really, really we don't watch TV all that often. There's rarely anything good on so we just watch The Office as soon as we can get it--usually sometime on Friday night. Here are some other shows that I used to watch...

2. Everybody loves Raymond
3. The Muppet Show
4. Saved by the Bell, Friends, silly sitcoms like that
5. Hogan's Heroes/Beverly Hillbillies/Bewitched/Gilligan's Island (my mom had a subscription of sorts and we got these shows on VHS tape)
6. Little House on the Prairie
7. My in-laws introduced me to Fawlty Towers, which is pretty much hilarious.
8. Oh, and when we moved to Utah my family would sometimes stay up on Saturdays to watch The Red Green Show, the Red Dwarf, and My Hero.

Eight Things I did yesterday
1. Went to church
2. Sang Christmas Songs
3. Took Rachel to the potty (several times)
4. Went for a felucca ride on the Nile
5. Watched Brian Regan and the Office
6. Made pumpkin cake
7. Spent a lot of time visiting with friends
8. Fasted and prayed for my cousin Jenna and her baby (although technically only Andrew fasted because Rachel's still nursing. Yes, still).

Eight Favorite Restaurants
1. Winger's
2. Bhua Khao
3. Mimi's Cafe
4. Boston Pizza
5. I really like Panda Express orange chicken, but really just the orange chicken. And Kung Pow.
6. Oh, that one Tibetan restaurant that Uncle Matt took us to. That was yummy.
7. Peter's drive in
8. Pretty much any gelateria. Lemon gelato. Always. Andrew insists that "Old Bridge" has the best gelato ever. We got gelato there on our honeymoon. It's basically nextdoor to the Vatican, so if you're ever in the neighbourhood, stop by!

Eight things I'm looking forward to
1. YSA Conference being over (it was fun, but it is time)
2. Babysitting the Lewis kids (we're crazy. I know)
3. Andrew having an actual job one day
4. Rachel to be 100% consistent with her potty usage
5. Sleep
6. Having another baby (not an announcement)
7. David coming to visit us
8. The end of the semester

Eight things I'm not looking forward to
1. Cleaning my house
2. The end of Eid
3. Rachel's 2nd birthday
4. Waking up in the morning. It always comes too soon.
5. The slaughter tomorrow
6. Working. I never wake up and think, "Oh, goody! I think I'll sort through some emails!" I just don't.
7. The talent show at the Christmas party. Andrew and I haven't practiced at all.
8. Clipping Rachel's nails. I hate doing that.

Eight things on my wish list
1. Like Lydia, a self-cleaning kitchen house
2. Lasik. Yes. One day I want to see.
3. Andrew to magically be finished with his schooling
4. To travel the world
5. To not be quite so strapped financially
6. A mosquito/ant/rat/cockroach/any-other-icky-thing free house
7. To find a store that makes affordable, cute clothes for tall, skinny people
8. A new piece of jewelry. (There, Andrew. I put that one on for you. Nothing big and gaudy. Just small-ish. But nice. But not something that will break the minute Rachel looks at it.)

Ugh. There. That was so hard for me today. I don't know why. Eight is just such a big, daunting number, I guess. Still fun though. Thanks, Lydia!

And now for the Christmas Picture post. My sister asked what my favorite Christmas things are....

First of all, this pot. 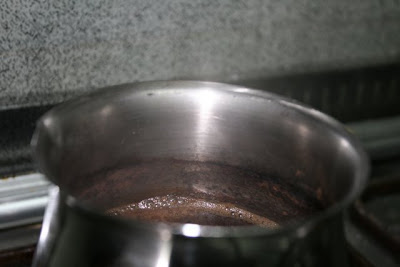 It's not hot chocolate. It's cloves and cinnamon simmering on our back burner. It makes our house smell Christmasy, which makes us feel like it could possibly be Christmastime because usually we don't feel that way. It was 80 some-odd degrees outside today!

Next, our snowflakes. We are still in the process of making them. I know I don't like the cold, but snowflakes are still pretty. 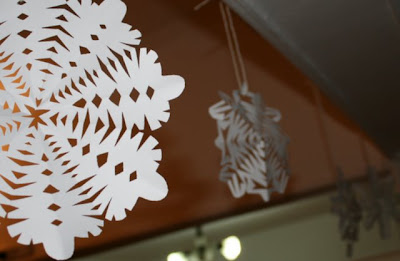 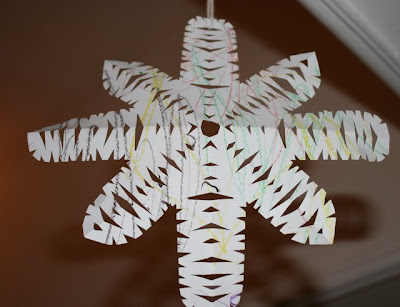 Sometimes I have Rachel color on them before I cut them out so that she feels like she's participating more. I don't let her use scissors yet.

Then there's our Charlie Brown Christmas tree with our lovely salt dough decorations and nativity set. 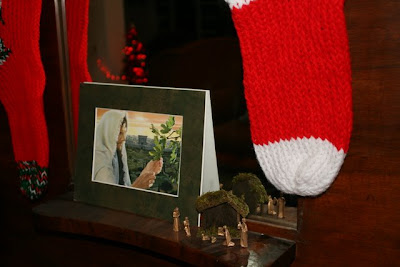 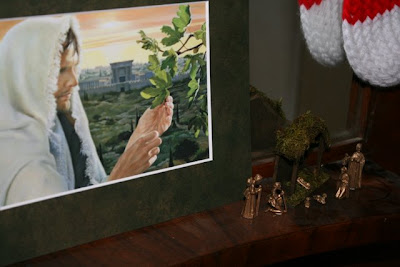 And our Christmas stockings, of course. 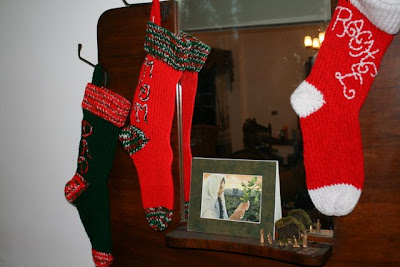 Those are all our Christmas things here. Just little touches of home. I suppose this is the most authentic Christmas ever since we're actually in the Middle East.

Anyway, I'm tired and words are not coming out right...so tomorrow...I'll write better. For now I'm going to bed.
Posted by Nancy at 1:40 PM