We headed off to Wikalat al-Balah today in search of fine Egyptian textiles. The first cab driver we stopped wasn't willing to drive downtown today, but the second one said he knew exactly how to get there. So we got in and sat in his cab and sat and sat and sat until traffic started flowing again. I don't know what the hold up was but it took us forever to get there.

And when we finally make it there the cab driver says,

"Ah, the market is closed on Sundays."

Thanks a lot Mr. Cab Driver. Thanks for telling us that after we'd already battled the traffic and made it to our destination. If he thought we would pay him to just turn around and take us home, he was sorely disappointed. Instead we paid him and got out of the cab so we could go explore.

"But everything is closed," he called out after us.

Yeah, well...we're here now, aren't we? And everything, mostly, was closed.

Suq Bulaq is probably the world's biggest second-hand shop. There were racks of clothes lining the streets and bins of clothes on the sidewalks and little shops filed with clothes, clothes, and more clothes. All of it used. 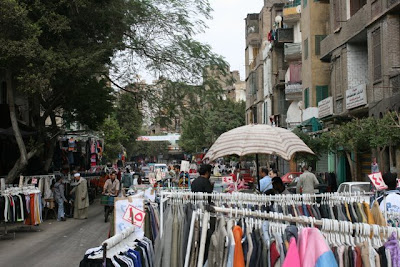 Some of it looked fairly new and some of it really was new. Other stuff was definitely used--half of it we wouldn't even touch. Like, seriously, used underwear and lingerie? No thank you.

Rachel had to go potty right when we got there. We found a mosque and Andrew took her in to use the potty, but they only had squatters so she ended up throwing a fit and refused to go. Instead she cried and peed her pants, poor thing. She was miserable all afternoon after that. 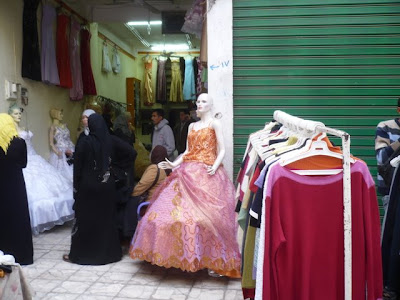 Hello, prom dress
So it was a rather short trip because of her grumpiness and because, truthfully, most everything was closed. We saw only one or two open shops selling bolts of fabric, but nothing really...interesting. I don't think any guidebooks say this, but the suq isn't open on Sundays, so don't bother going...unless you want icky second (or third or forth or more) hand clothes. Most of the alleys were completely deserted and we just wandered around looking at things and taking a few pictures.

When we walked down the alley pictured below a strange man followed us and started yelling at us about taking pictures. This was odd because most people, when they see we have a camera, start asking us to take pictures of them. This particular man, however, was quite perplexed. 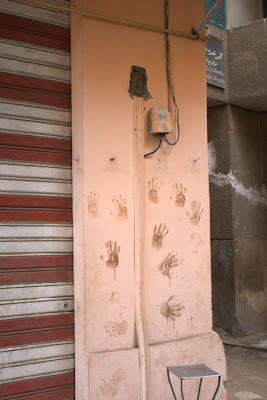 He screamed at us to stop taking pictures and accused us of espionage.

"Are these your background pictures? Are you turning them in to your government? Are you spies?"

He was quite livid. Andrew tried to calm him down by explaining that we were just taking pictures of the handprints because we don't celebrate Eid al-Adha in America and so it's interesting for us.

"You don't have blood in America?" the man screamed.

"We do. We just don't have bloody handprints on our walls. That's all. I'm just taking a picture."

"Well, you'd better get out of here! It's dangerous. There are people with knives down that road. People have seen you taking pictures and that's suspicious. They'll get you. They'll stab you. We don't like spies around here."

And on that happy note we decided to call it a day. The weird thing was that we don't even know where the guy came from. It wasn't his store or house we were taking a picture of...unless he wasn't telling the truth because he thought we were spies. It kind of makes me wonder what he was up to.

We weren't too sad to head home, though, because there was nothing to see since the suq was closed and Rachel was pretty grumpy, anyway. We did manage to pick up some blankets for fairly cheap, which will be nice since it just keeps getting cooler. I made one into a bunting bag for Rachel--hopefully it will be a little more difficult for her to kick off. I had to go sneak her into it after she'd already gone to bed; turns out she was so grumpy this afternoon because she's sick and she was absolutely begging to go to bed by 7:30 PM. Poor baby!
Posted by Nancy at 1:10 PM