Straight from the dinner table

Today was kind of crazy. We went to bed shortly after midnight last night--Andrew and I were up writing and editing papers, respectively. It felt like our heads had just hit the pillow when I heard some stirring from Sam's room.

About 10 minutes later there was a full-on temper tantrum going on in there, complete with yelling, kicking, and screaming. If he knew profanity I'm sure that would have been involved.

My question was answered with even louder screaming and flailing limbs directed at my face, so I backed off and started 20 questions.

After a few minutes I went back to the bedroom and told Andrew it was his turn. He fared no better than I. And his screaming woke up Rachel so she was now screaming, too.

So I got her up and we both joined Andrew to see if we could get Sam to calm down. I got him a cup of milk while Andrew continued to question him. He refused the milk and kept on screaming so we kept on guessing.

"Do you want to watch Lion King?" I asked. I think we've watched that a good 50 times already and we've only been here 4 full days.

Sam stopped screaming. He stopped flailing his arms. He stopped kicking his legs. He took a deep breath.

"Yeah," he said. I had guessed correctly.

We gave him the milk and Andrew cuddled him while I cuddled Rachel.

"We can't watch Lion King right now because it's still time to sleep." I said, but it wasn't that easy to convince him to go back to bed.

45 minutes later and Sam had finally quieted down and I was able to turn my attention on getting Rachel back to bed.

It was a sad moment when the alarm went off at 6 AM! Most of the kids, including Rachel and Sam, woke up a little grumpy. So today wasn't a very good day and I was quite grumpy myself by dinnertime.

Still it was humorous. Always humorous. I am so happy that Rachel's starting to talk now because I really want to hear about what goes on in that little head of hers.

I made stroganoff for dinner tonight. Emma and Megan didn't really want to try it since it had mushrooms in it. Sam said it was "nasty." Who knew he even knew that word? Eventually Emma and Megan decided that plain noodles were bland and tried the sauce. They seemed to like it. They ate everything on their plates, but I'm not sure that counts as evidence because this is what Emma said,

"Sister Heiss, we've had such wonderful meals while you've been here...so..."

"Can we have McDonald's tomorrow?" she gushed out.

Everyone else seemed to enjoy dinner. That or they were great actors. Plus, Emma doesn't like strawberry ice cream (or fruit at all) so her opinion doesn't really count.

And she was very appreciative of Friday's dinner--we made pancakes with blueberries (and special blueberry-free ones for Little Miss Fruit-Hater Emma)--so appreciative, in fact, that she drew us a picture.

The likeness of Rachel is amazing. That's pretty much what she looked like on Friday. I wish we had taken a picture of her in her dress so that you could see how exact this drawing is of her. The drawings of me, Andrew, and Emma not so much. But that's pretty much Rachel right there. In fact, I didn't even need to take a picture because Emma drew her so well. 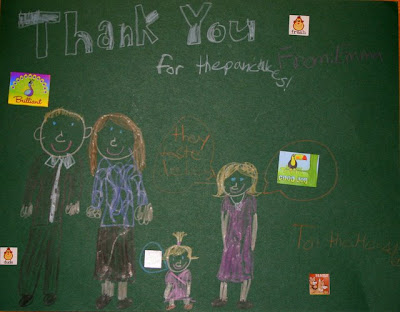 If you can't read the words, it says, "Thank you for the pancakes! From: Emma, To: the Heisses"

Rachel's speech bubble sticker says, "suh-weet!" I wish the flash didn't erase it--it also has a monkey face on it and I think it's hilarious.

Anyway, later this evening Emma was in the kitchen and I heard her yell (at the dishes?), "Die, fi-end!"

I didn't have the heart to tell her that's a one-syllable word. She was actually doing her job and I didn't want to interrupt that. She's been having a hard time dealing with her dish duty--she has it for the whole month, which might seem like a long time but then she gets two months off so in the end it works out.

She was pretty upset that we had ice cream after she loaded the dishwasher (with Jessica's help) and Megan was sweet enough to wash the dishes, by hand, for her. Megan just wanted to play in the water and I told her that she could...if she washed the bowls and spoons. So there she was, happily washing away when Emma walked into the kitchen and yelled,

Seriously?? She's been complaining about having to do the dishes all week, and here's her little sister kindly washing the dishes for her. I pulled her aside.

"Emma, think about it for a minute."

"But she's doing my jo-ob!" she whined, again making a two-syllable word out of one that should be singular.

She looked at me and cocked her head. A coy smile spread across her face, "Oooooh..." she said.

Don't worry; we still want more children. They're just too funny to pass up, exhausting as they are. I can't imagine not wanting children. One of my childhood friends, Lindsey, is also playing mom right now and she's decided that she never wants kids and babysitting just reminds her of that fact.

Let's remember that Lindsey...can barely manage to take care of herself, let alone children....C. and I both have to work Thursday. WHO IS GOING TO PICK UP THE KIDS? I start to flip out more because 'whoisgoingtopickupthekids' isn't a conversation that I've had with C. Conversations involving children are more those involving NOT spawning anything from my uterus, EVER.

I can't tell you how sad I felt when I read that. My life would be so empty without Rachel; I can't imagine giving up my birthright willingly. So many people I know are having a really hard time having children naturally and it's really, really hard for them to deal with. Families are essential.

They are also kind of hard, but once the kids are all in bed and you write down all the funny things they said during the day it makes it all worth it.