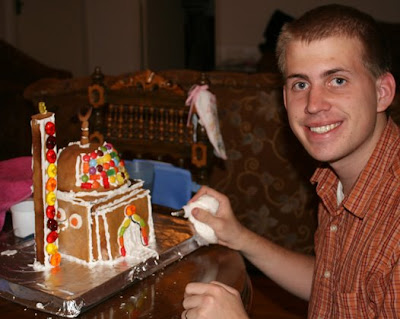 Though we were coughing and sniffling on Christmas Eve we still made an effort to be festive. The Schillings came over and we made gingerbread houses from scratch because that's the only way to do anything over here. After we got our hands on some molasses (thanks, Sara!) we started brainstorming about what we could build. We came up with some pretty big plans, involving building the Nile, the pyramids, a mosque, and a nativity scene, among other things.

After making the patterns for the pyramids and the mosque we decided that was enough. We'll save the nativity scene for next year, I guess.

The pyramids were pretty easy, but the mosque wasn't. We couldn't think of how to make the dome or the minaret. Carolee and I stopped by Moody's while we were out Christmas shopping and found a little round cake pan. We bought that and put dough on the outside of it to make the dome. It turned out pretty well and made us want to eat ice cream. Can you imagine candy cane ice cream in a gingerbread bowl? How much more Christmassy could dessert get? 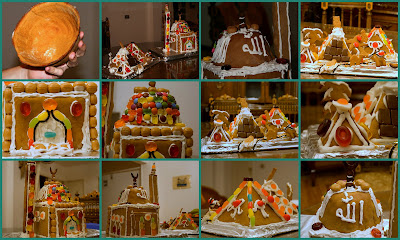 It took us quite a while to make the dough, roll the dough, cut the dough, and bake the dough. By the time we were finished with that part it was bedtime for Rachel and we were all feeling like we were living in the story of the Little Red Hen. No one wanted to do anything. We were gingerbreaded out; still, though, we had to keep going. We had yet to actually make any actual gingerbread structure. 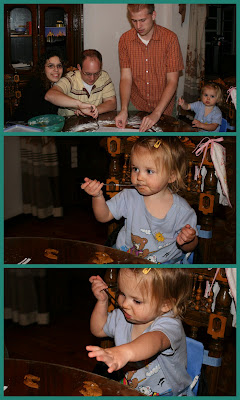 And we still had to make the icing. Every instructional website I looked at suggested using royal icing. I have never made royal icing before, but we decided to do it anyway. The problem with royal icing is that it uses egg whites which you have to whip to oblivion and back until they form "stiff peaks." We don't have an electric mixer so we had to beat them by hand. That took just about all night, so if we weren't bored of our project before we were completely sick of it by the time we'd all taken a turn beating those eggs. We found that when we twirled the whisk in our hands (like we were using a bow-drill to start a fire) we got the best results.

When I broke out my cake decorating set the boys got really excited about our project again. Josh had never used an icing bag and Andrew, much to my surprise, hadn't either, so they both dove in and got right back to work as soon as the icing was ready. 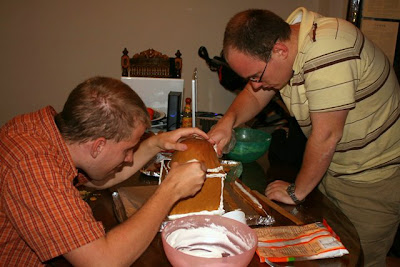 We were up decorating until almost midnight, but it really helped us get into a Christmas mood. I suppose part of that is because we listened to Christmas music the whole time we were working. 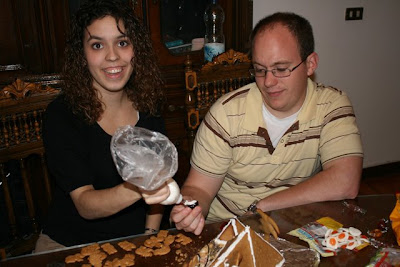 This just might become a family tradition...
Posted by Nancy at 6:19 AM