Poor Rachel was wandering around like Toodles on Hook all morning long.

“I lost my uncon,” she kept saying, “I lost my Uncon Patwit!”

Uncle Patrick was having a glorious sleep-in. We all kind of slept in, really. Rachel woke up Daddy at 9:00, I slept until 10:30, and finally at 11:40 Rachel could take it no longer and burst into the guest bedroom to find the dear Uncle Patrick she had lost.

Then she remembered that she was scared of him still and came to a screeching halt. I’m sure her original plan involved climbing up onto the bed and jumping on him because that’s her favorite way of waking people up…so hopefully Patrick won’t be too surprised if that happens tomorrow. They made friends today, so it’s possible.

Yesterday Rachel’s assessment of Uncle Patrick was, “He’s a little bit scary.” Today when we asked her what she thought of him she said, “He’s cute!”

We left for the Citadel soon after Patrick woke up. Everything closes early during Ramadan so we had to make sure we had enough time to actually do something.

Patrick had seen the Citadel on our ride home from the Dervishes yesterday and was curious about it, so it seemed like a good place to take him. We headed up to the Mohammed Ali mosque first. I love going into the courtyard and looking out over the city through the little cutouts in the window. 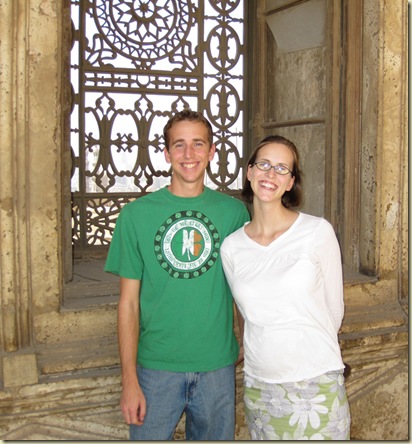 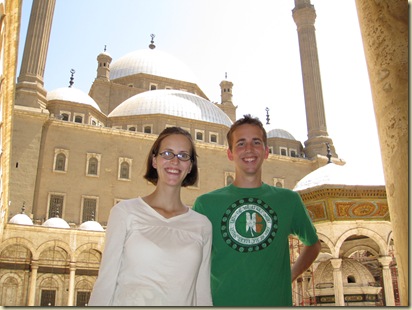 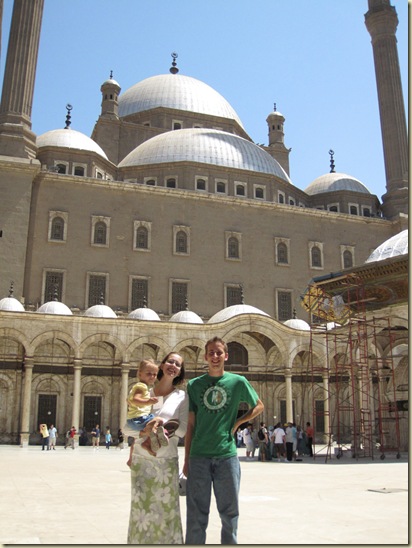 The marble was so hot on our poor bare feet, so we tried to stay in the shady spots. Rachel kept saying, “Oh! Hot shade! Hot shade!” We walked the whole area of the courtyard, in the shade of course. Rachel thought it was a long walk. We were holding hands and walking very slowly, a few paces behind the boys.

As long as she’s happy, right?

We went inside the mosque and told Patrick a bit about the architecture and about Islam. 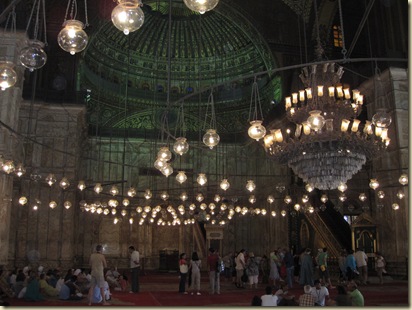 “There are 365 lamps in here,” I told him, indicating the chandeliers circling the room.

“Yeah, half of them don’t work,” he scoffed.

Oh, I’m so proud of him. He’s understanding Egypt so well already. 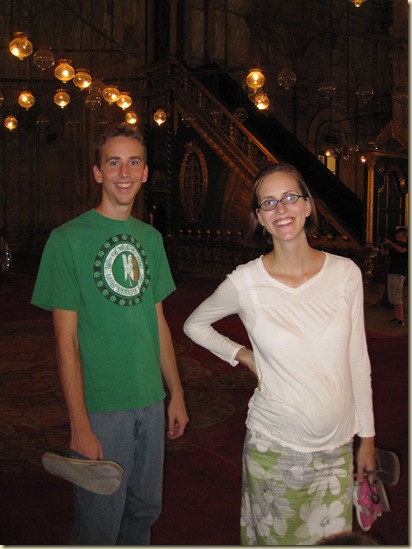 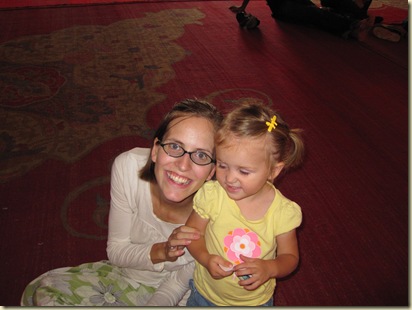 Since Andrew and I had already been to the National Military museum and weren’t very impressed with it, we decided we’d check out the National Police museum. There was a nice, almost empty courtyard that we relaxed in for a few minutes before heading into the museum.It’s high tourist season right now, so it’s nice to get away from the crowds. 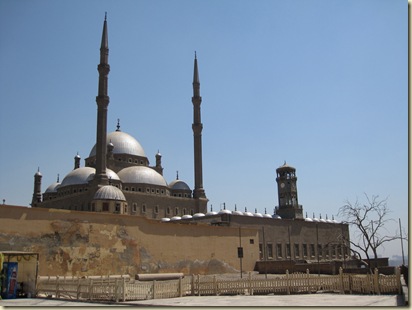 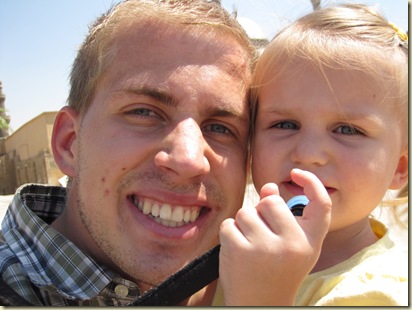 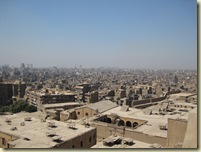 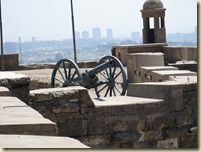 Our favorite display was a diorama depicting the Battle of Ismailiyya. They used actual army men toys—I totally recognized all the poses the men were in, their weapons, the tank. I think my parents still have a bucket of these somewhere in their house. 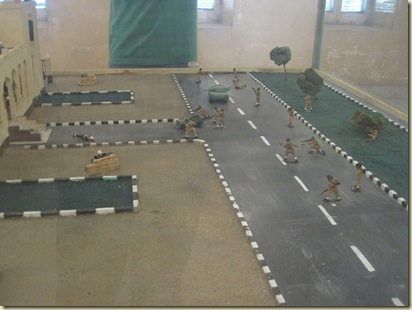 At least they painted them… 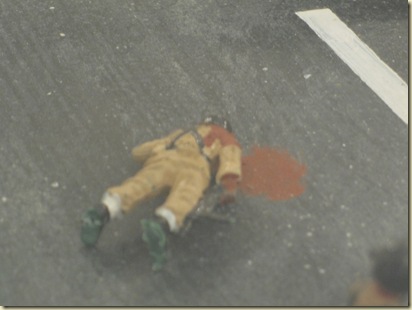 We also enjoyed looking at the random Pharonic artifacts (they have so many of them they don’t know what to do with them; why not put them in the National Police Museum?) and the “Illegal drugs recognition kit.” I’ve never actually seen drug paraphernalia, so it was nice to have it displayed so plainly.

I was just noting the difference between a hash pipe and other drug pipes when Rachel announced she had to use the bathroom, so we left the museum. It was free, anyway. And not all that interesting.

We wandered outside to find the WC and were accosted by the “Supreme Matron of the WC” who graciously let us into the stall with a “chair.” Usually she keeps that stall tied closed because we wouldn’t want just anyone using the porcelain throne, right?

I was glad that she opened it for us because Rachel doesn’t quite understand how to use squatters. What I didn’t like was that she insisted we keep the door open. Because of the “chair.”

Rachel wouldn’t go with the lady watching and the lady wouldn’t let me close the door, so we gave up and left. The lady asked me for money. I told her no since we hadn’t actually used the facilities. Besides, she wouldn’t even let us close the door!

Andrew and Patrick had finished with the museum by the time we came out of the WC. We sat in a corner and sneaked in a little Ramadan snack. Technically Rachel and I don’t have to sneak because we’re exempt from fasting, but it’s a little awkward for Andrew and Patrick to eat in public. While sitting there, I realized that I had to use the WC also but I didn’t want to face the Supreme Matron again.

Patrick noted aloud that a group of Egyptian girls had used the WC and the Supreme Matron didn’t follow them inside or ask for money.

I decided to just go for it. Walk in, and leave…without paying. So I did. The Supreme Matron sent her minion in to let me into the stall with the kursi but I ignored her and used a squatter stall. She asked me for money and I told her I didn’t have any—which was true because I typically don’t carry money. Then I left.

She was miffed and they talked about me behind my back, but I didn’t care. I don’t mind paying to use a toilet in public, but not so much at a place that charges a $10 entrance fee (granted, we only paid $5 because we have student cards) or to Supreme Matrons who are rude and don’t even let me close the bathroom door or offer me any toilet paper, and who are only asking me for money because I’m a “tourist.” I have never been asked for baksheesh to use the bathrooms at the Citadel before; I don’t see why I should start handing it out now. 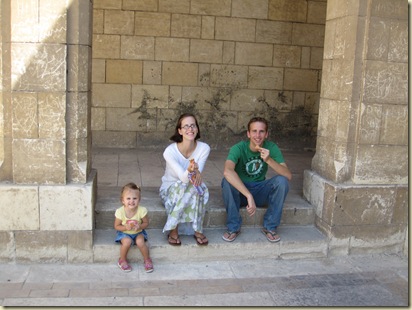 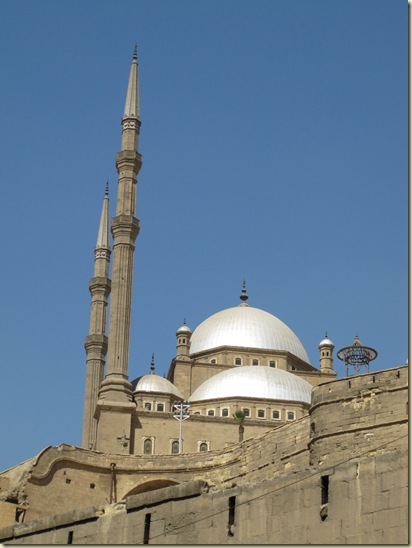 We walked from the Citadel down to Ibn Tulun, making a few stops along the way to watch a bus being pushed up a hill by a front loader, to buy a bottle of what Rachel calls “icy cold” water for 2 LE (instead of the 12 LE the guy at the Citadel wanted to charge us), and to look at some Ramadan decorations. Rachel sang “just keep walking” the whole time.

We also had to cross the street a few times. This is what Patrick thought of the traffic: 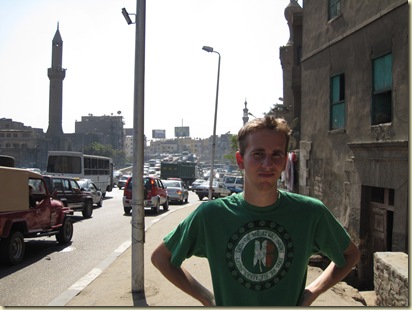 Our favorite fanous was one constructed of a discarded Doritos box. 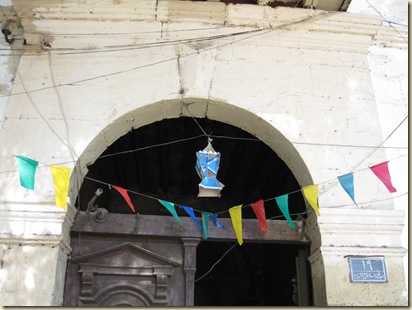 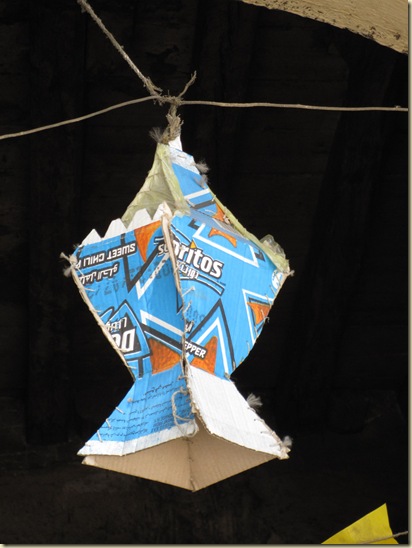 Our favorite garland was made of empty pasta packages. For as much as Cairenes litter, they sure do know how to reuse things well. 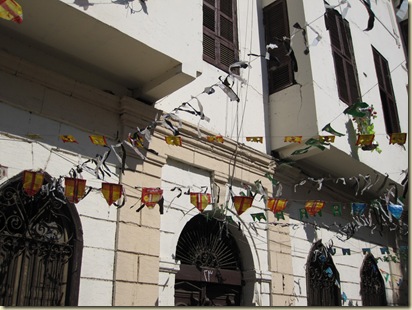 When we got to Ibn Tulun it had already closed for the day. Too bad. Instead we just found a taxi and headed home. Everything else was closed, too. 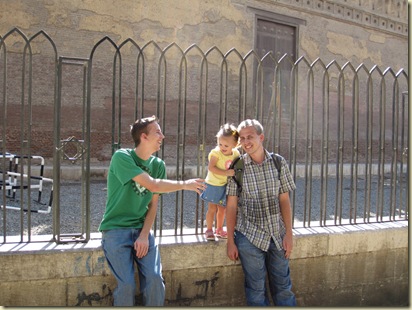 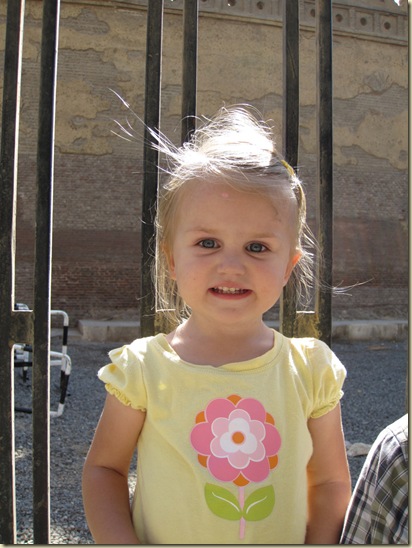 All of downtown is decked out for Ramadan and we were planning on heading back to walk around and look at all the lamps and things that are set up, but Patrick and I both took too long of naps before dinner and that kind of set us behind schedule. 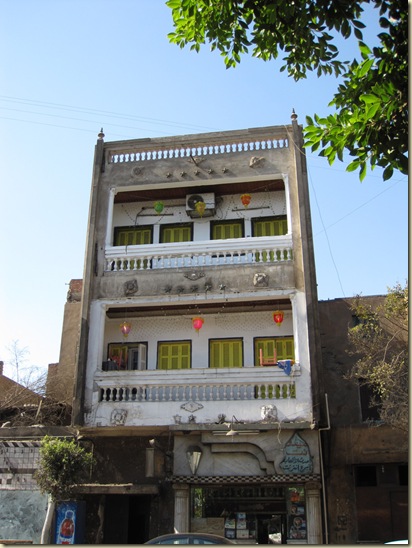 Instead we went out to see our local “Ramadan Tree,” which is actually several trees on a midan that are swathed in fawanees (which is the plural for fanous, which means lamp…pluralization is one of the many reasons I find Arabic incredibly difficult). 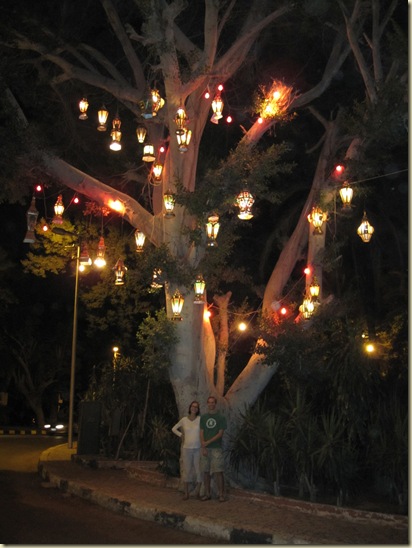 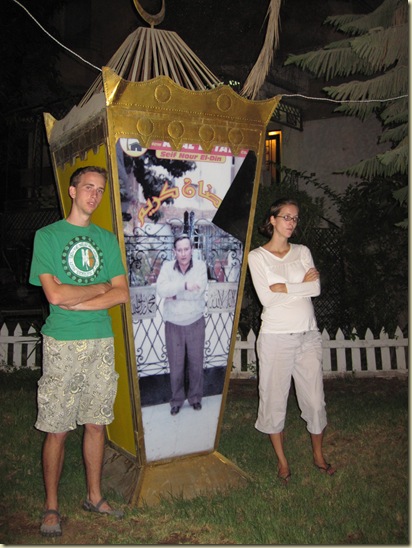 It’s fun to have so many bright lights out; it makes everything seem cheery and festive. Since we can’t go Christmas-light-looking here we go for Ramadan-fanous-shuftis instead.

We also stopped by Road 9 to run some errands and inquire about purchasing our own fanous. They really aren’t all that expensive; the challenge will be finding a sturdy, transportable one. We did end up buying some Ramadan fabric, which I’m excited about. My friend Melissa said they had friends over for dinner and she mentioned needing to go and cover her house in Ramadan fabric. I thought that was a wonderful idea…so we bought some just so we could do that when we get home. Is it weird to buy fabric just so you can use it when you have guests over to eat Arabic food?

If it is, who cares? Ramadan Kareem!