We started the day relatively early—our first visit was scheduled for 8:30 at the Library of Congress, and since our hotel is over by the White House at McPherson Square, we figured we would have to leave at 8 to get there on time. The hotel breakfast was amazing and included a waffle bar, bacon, sausage, potatoes, cereal, fruit, English muffins, cereal, and everything else your breakfast-loving mind could imagine. Glorious stuff.

We left the hotel on time and ran to the metro, but some people in our group had difficulty getting tickets, and we ended up getting on the metro at 8:20. We got to the Library of Congress 10 minutes late but were quickly escorted up to the Congressional Research Service (CRS) by Clare, a lady who visited BYU a few months ago to talk to us about federal careers. It was nice seeing her again—when she came to Provo in September I got to spend lots of time with her talking about working for the State Department, USAID, or even CRS (basically I’m kind of in love with the idea of working for the federal government).

She took us to one of the CRS conference rooms, where we were joined by two of her fellow researchers. Clare somehow knew that I would be coming, so she invited one of the Middle East analysts to come talk with us. Our meeting with CRS was relatively uneventful—Clare had already told us all about CRS back in September, so most of what they talked about wasn’t new. However, during the meeting I was amazed with how amazing CRS is.

The CRS is a legislative branch agency (as opposed to the myriad of executive, cabinet-level agencies) that focuses on providing reference information and detailed reports to members of Congress. Each CRS analyst is assigned to general overarching sections, such as domestic, foreign, or legal affairs, and within each section, analysts carve out a specific niche of research. CRS employees strive to become experts in their chosen topics and spend their days researching and writing reports requested by Congressional members and staffers.

The CRS is far less hierarchical and rigid than other government agencies. Analysts can remain in the same position for years without needing to change careers or move up to become a section manager—they can qualify for raises in the GS scale without necessarily taking on additional job duties. Instead, as analysts’ careers progress, their research becomes more prominent and their names gain recognition and notoriety among Congressmen who rely on their reports.

Because of this more relaxed atmosphere, the CRS has been described as the ideal bridge between the public sector and academia. Its analysts are more like university professors who spend considerable time research and attempting to get their work published in order to gain academic clout.

Being a CRS analyst basically like being a federal scholar/researcher/librarian. Instead of doing reports and papers for journals that aren’t read, you write stuff for Congress and hold briefings for congressional staffers, and you even occasionally testify before congressional committee hearings and travel with congressional delegations. Almost like heaven.

When we were done with CRS we ran back to the metro and headed to Arlington, Virginia. I love that the DC metro spans multiple states—seeing a “Welcome to Virginia” sign in the metro station made my geeky geography heart flutter.

Our second stop was Ashoka, a social entrepreneurship, um, sponsor and supporter. They help support (and fund?) entrepreneurs across the developing world. They are a non-profit, and therefore have limited funding, and their office culture is very particular—it takes anywhere from several weeks to several months to get hired since they interview you like 4–5 times to make sure your personality fits. They were interesting, but not something I’m really interested in.

We had a fantastic lunch at Chipotle’s before heading back to DC to meet with Amnesty International. Our meeting with them was fascinating—they were buzzing with the news of Aung San Suu Kyi’s release two days ago, since they’ve been lobbying for it for years. They have an ambitious mission to help all political prisoners and prisoners of conscience worldwide. Again, as a nonprofit their funding is more limited, but they are far better established than Ashoka. Again, it was a fascinating interview, but not something I’m that interested in at this point.

After Amnesty we ran back over to the Capitol building for our final visit with the Department of Labor. While the both the Library of Congress and Amnesty were near the Hill, I was only able to see the rotunda from a distance above the tops of the buildings. On our walk over to Labor, though, we turned a corner and saw this: 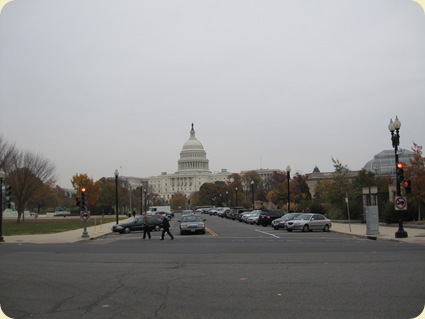 Yep. There it is. 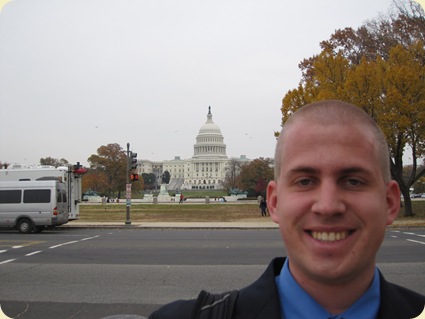 Our meeting was absolutely fantastic. We met with a recent BYU MPA alumnus who now works with Labor’s Employment and Training Administration (ETA). Instead of telling us all about the mission of Labor and ETA, he spent over an hour coaching us on the best practices for getting a federal job, which was extraordinarily encouraging. Finding a federal job seems so daunting and uncertain at times because of the unwieldy application process, but with the tips he gave, it now feels far less impossible.

We finished at Labor at 4:40 and decided to run over to the neighboring National Gallery of Art for a really quick visit before it closed at 5. In twenty minutes I ran to the back of the gallery and worked my way forward, passing the only original Da Vinci painting in the US, a ton of Vermeer’s amazing Dutch art, and dozens of extremely famous old paintings that I had no time to, um, appreciate. 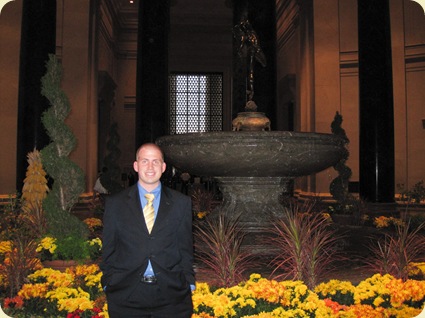 Tonight, after returning to the hotel, seven of us spent almost three hours reviewing for our huge economics midterm that we need to take online tomorrow. Even though we’re all having a blast out here in DC, life sadly goes on back in Provo—we still all have homework. We have a couple major assignments to do and tests or quizzes to take while we’re out here this week, including a massive Excel project I need to get back to. I’m exhausted from all our running around today, but I’m so excited to be here. DC is a beautiful, dynamic, and fascinating place and I would absolutely love to live and work here sometime in the near future. This is an amazing place!