Today was incredible! One of my main reasons for coming on this trip was to visit and become acquainted with some of the major federal agencies. Two of our four visits on Monday were to federal locations, but both CRS and the Department of Labor are relatively small compared to the heavy hitters like the State Department. On Tuesday morning we went to the biggest hitter: the Department of Defense. 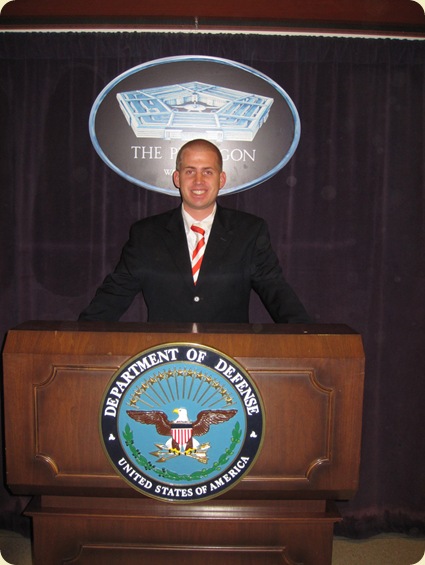 After we passed the intense security at the entrance, we met our main contact, a BYU grad DOD employee that works doing… something… in the Pentagon (I totally forgot what he did! I was too focused on the amazing interior of the Pentagon to really pay attention to the career aspect of the visit)

He took us on a 1.5 hour private tour of the Pentagon, which barely scratched the surface of the enormous building. There are over 18 miles of hallways in the building, but it is built in such a way that it only takes 7–10 minutes to get from any point to another, anywhere in the building. DOD is a massive agency—over 26,000 people work in the Pentagon alone. Because the building supports so many thousands of employees, it is almost like a miniature city inside. There are dozens of food courts, banks, pharmacies and stores. Flower shops are conveniently located near the exits, apparently for men returning home late at night. There’s a Best Buy and a couple other large retail chains. They even have a DMV branch so you don’t have to leave work to get your driver’s license renewed. It’s absolutely gigantic.

Most of the halls are lined with museum-like exhibits highlighting different aspects of military history, and given the 18 miles of hallways, you could spend weeks looking at everything. Exhibits ranged from original Trumbull paintings to an original WWII Enigma machine to a golden AK-47 confiscated from one of Saddam Hussein’s palaces in 2003 (the famous deck of cards of key Iraqi ministers is at the bottom of the cabinet). 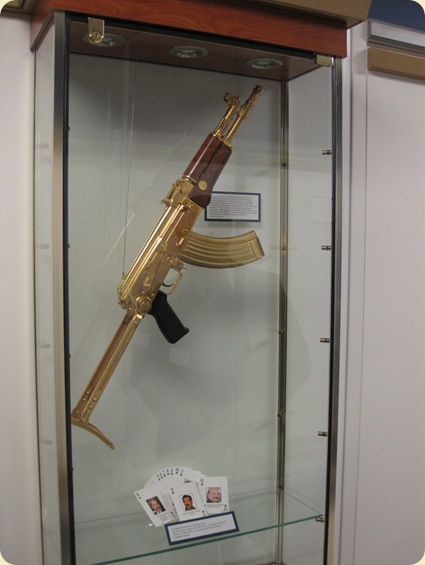 After highlighting some of the more important exhibits, our guide took us to the wing of the Pentagon that was hit by American Airlines flight 77 on September 11. The building has obviously been reconstructed, but you can still see evidence of where the damage was done. A large section of the building collapsed about an hour after the plane crashed, but because the plane hit one of the older sections of the Pentagon, the collapse sheared down one side. Notice how the left side of the collapsed area is completely straight and structurally undamaged: 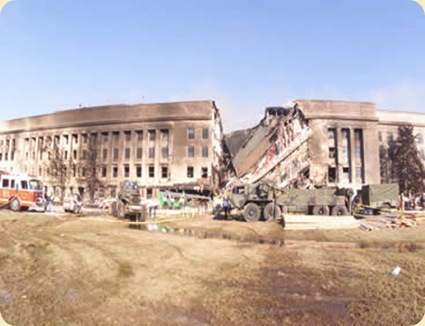 Here’s what the new section looks like from the inside. The part of the hallway beyond the metal strip in the ground was the part of the building that didn’t collapse—it shows the straight line that withstood collapse. I’m in the collapsed (and rebuilt) section. (Also notice the posters and exhibits… that’s what most of the halls look like) 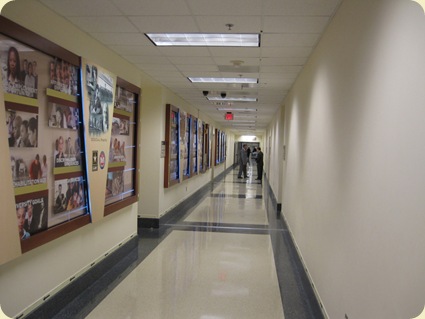 We then went down to the quiet memorial chapel, which has a list of the 200+ victims that were killed at the Pentagon that day. The chapel is built at the base of the collapsed section, at almost the exact point that the fuselage of the plane hit the building. 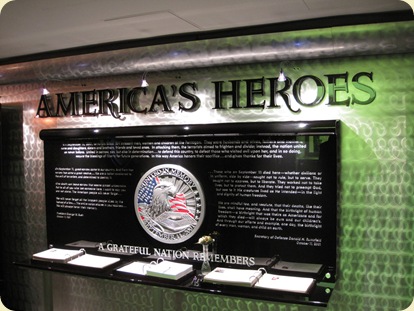 After the memorial we walked through the center of the Pentagon to exit out of the opposite side and enter the conference center annex to meet with half a dozen LDS DOD workers and talk about DOD careers.

Hilarious side story before talking about the career meeting though. The center of the Pentagon is a huge courtyard with a small pavilion in the middle. The pavilion houses a small coffee shop and hot dog stand—just one of the hundreds of stores in the Pentagon. According to one of the older army officers who spoke to us during the meeting (so the story should probably be taken with a few very large grains of salt), in the early 90s, after the Cold War ended and we started talking with Russians again, we discovered that for decades, the Soviets had several missiles aimed at the Pentagon, given that it is the center of the US military. Because the Soviets based their missile targeting on satellite imagery, they assumed that the building in the middle was a type of missile silo or other critical building, so they trained their missiles on it. They were targeting an oh-so-threatening hot dog stand.

The career meeting was fascinating—civilians and members of most of the branches of the military talked to us about finding internships and starting careers with the DOD. I’m not particularly interested in ever working for the DOD, but it was amazing to see the huge network of Mormons in the Pentagon. They all know each other and have monthly devotionals in a large conference room, and they often get general authorities to come speak. They all help each other out in advancing their careers and getting other Mormons into the department. Fantastic stuff.

We left the Pentagon at 12:30 and ran back to downtown DC for a visit to the World Bank. We met with the director of human resources, an Italian man, who talked to us about internships and careers with the Bank. Most positions are based either in DC or London, and they’re always looking for people with strong foreign language skills, but they strive for international diversity and try to hire people from all major continents, so it’s generally more difficult for Americans to get jobs, especially if they have no background in economics (like me!). Regardless, it was cool to visit the Bank and put it on my growing list of possible organizations to maybe work for someday.

From the World Bank we ran over to the Red Cross, stopping for a quick lunch at Quizno’s on the way. The Red Cross building is across the street from the White House (so cool!) and was built in the early 1910s. It is a beautiful building and features a huge stained glass window made with Tiffany’s glass (which is apparently famous). It’s full of vintage posters and artifacts, some dating from the Civil War. I liked the two posters from WWI and WWII. 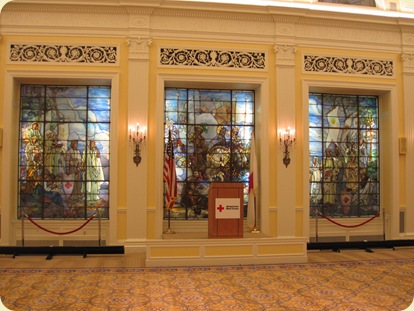 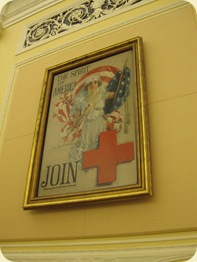 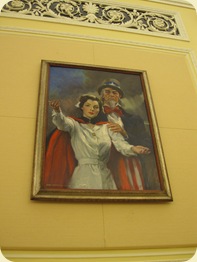 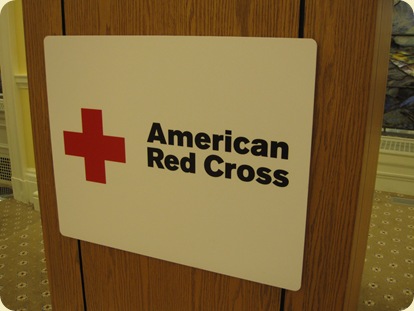 We met with a group of 5 Red Cross employees, 3 of whom were Mormons (the LDS network in DC is ridiculously huge!). They talked to us about the Red Cross’s wide array of services, from blood donation to disaster relief, and encouraged us to try to intern with them. They’ve had several BYU MPA students complete internships with them over the past few years, and several have since become full-time employees. They love BYU students and are trying to recruit more.

After the Red Cross, most of our group went back to the hotel to start taking the dreaded economics test—a three-hour, open note, open book beast. I debated going back right away, and I probably should have since I still needed to dedicate a lot more work to my Excel project, which was due the next day, but I decided to run over to the National Portrait Gallery with a couple other people from our group before going home. I was persuaded by a new exhibit at the Gallery—an exhibition of Norman Rockwell paintings and drawings from the personal collections of George Lucas and Steven Spielberg. How could my geeky heart say no?

The exhibit was wonderful, but after 20 minutes I felt really guilty and went back to the hotel by myself to get cracking on my homework. The test took me 2 hours and 54 minutes to finish (cut close much?) and I stayed up until 1:30 working on Excel spreadsheets. Needless to say, I was wiped out the next morning. But more on that later…