The Land of Oz

Rachel did not end up going to school this morning. She was all geared up to go to school but things fell apart completely when I asked her to get out of her jammies and into her school clothes.

"Where's my Dorothy dress?" she asked.

"I'll just get it out of the laundry basket," she said and took off down the hall.

"Even if I put it in the wash right now it wouldn't be clean and dry in time for you to make it to school. You have to be there in twenty minutes."

"You need to choose something different."

"Okay, fine. My other Dorothy dress."

Rachel has two blue play dresses; they are both "Dorothy" dresses. There's nothing especially "Dorothy" about them, except that they are blue and Dorothy wears a blue gingham dress.

The fact that they were both dirty was infuriating and Rachel's blood began to boil. I tried sending her to her room, suggesting other outfits, coaxing, prodding, goading, cajoling...everything failed. Finally I dropped the t-bomb; I threatened her.

The ultimatum was this: Stop throwing a fit and get dressed right now or I will call your teacher and tell her you aren't coming to school today.

Instead of stopping, though, Rachel kicked things up a notch.

I picked up the phone.

I pressed the "call" button.

"Hello, this is Nancy. I was planning on having Rachel make up for Thursday today but I don't think she'll be able to come in today. Will Monday work? Sounds good. Bye."

The fit she threw was otherworldly. I didn't know that human beings could make the noises she was emitting or that it was possible to writhe in the acrobatic manner that she was. She loves going to school and I really don't think she thought I would follow through with my threat. But I did. Because I'm a tough momma.

I just don't get no respect.*

At around 10:30—an hour and forty minutes after her epic meltdown—when she had calmed down enough that we could actually talk to each other I taught her an object lesson. I grabbed a purple marker and a black marker, not for any reason in particular but mostly because they were handy.

"What are some things we have to do to before we can go to school in the morning?"

"Yes. We have to eat breakfast. We have to brush our teeth and our hair. We have to pack our backpack. And we also have to get dressed. When we do those things then we can leave for school and we like going to school. Wouldn't you like to go to school?"

"I still do want to go to school."

"Well, you're already uber late so you can't. Why were you late? Who made it so you couldn't go to school?"

Rachel pointed at me.

"Wrong-o! I gave you two choices and you chose poorly. The first choice is the purple marker: going to school after getting dressed. The second choice is this black marker." I held the black marker up for her, "This marker represents yelling and screaming at your mom and refusing to get dressed and throwing such a long and horrible temper tantrum that wastes so much time that you can't go to school. Now, which marker do you want?"

Rachel picked up the purple marker.

"Yes. That one is the better choice. But which marker did you choose this morning?"

Rachel put down the purple marker and picked up the black marker.

"So which marker are you holding?"

"So, even though you wanted the purple marker you ended up holding the black marker. Weird. Do you know how that happened?"

She shook her head.

"It happened because you made the wrong choices. You made choices that lead to the black marker so that is what you got. If you wanted the purple marker you should have made choices that would lead you to the purple marker. That's what we call choosing the right. If you make the right choices you get the right consequences. You can't make the wrong choices and expect the right consequences. It just doesn't work that way. Understand?"

She nodded and sniffed.

"I'm sorry, baby, but you are going to have to live with this consequence all day."

She ran to her room, sobbing.

I was sorry to make her so sad. Twice. But it's something she needs to learn. And it's a hard lesson. And I am so sick of her fits I could...throw a fit. 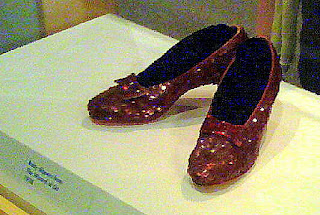 On a lighter note, Andrew went to a museum today (I'm sure he could tell you which one—actually, a quick Google search reveals that it was at the National Museum of American History**) and saw the real ruby slippers. He took a picture with his cellphone and sent it to us.

Rachel was overjoyed. For the rest of the day (when she wasn't pouting that I didn't let her go to school) she was telling everybody,

When he phoned us this evening she answered the phone and said, "Hello, Daddy! What did you do today? Did you see the real ruby slippers!?"

When I talked to him on the phone he told me that he had found a bit of Dorothy-related paraphernalia at the gift shop so he bought her something for Christmas.

I'd spell what it was, but I don't want to give away the surprise...which is why I was spelling in the first place. The funny thing was that Andrew started spelling back to me.

We both had a laugh when we realized he had no reason to spell to me since I was the only one who could hear what he was saying. I, on the other hand, had a little girl with very large ears in the room with me so spelling was absolutely mandatory.

So I couldn't be happier!

Because happy is what happens
When all your dreams come true!

Still, I'm happy he's coming home because, as the saying goes, "There's no place like home!"

* I really have no idea who this guy is but he was quoted on The Office, ergo...
** I really love Google. I had to tell my mom something today but I couldn't remember the website to get the information so I typed "mba clothing exchange byu stadium." What was the first result? Exactly what I needed. As Andrew would say, it made my nerdy heart flutter.
Posted by Nancy at 12:28 AM