First snowman of the year

This morning Rachel woke up before anyone else. Except for Grandpa who was already gone for the day, and Grandma, who was just getting read to head out the door to join Grandpa at church. Grandma got Rachel some breakfast and then left. A while later Rachel came to wake me and Andrew up. We played around on the bed for a while and then asked her if she wanted breakfast.
"Oh, I already had breakfast," she informed us, and then told us that she wanted to get dressed because it had snowed.
I convinced her yesterday to wear one of her red dresses (that has been hanging in her closet, neglected, for months now) because it's beginning to look a lot like Christmas and because red and pink are basically the same colour. So this morning she chose one of her red dresses, pulled on some red socks to match, threw on her Sunday shoes and was out in the backyard before Andrew or I had even gotten dressed. We hurried to catch up with her and eventually coaxed her inside to put some more adequate clothing on—unfortunately the most adequate we could muster were some boots and mittens...not that we don't have coats or pants or hats...she just wouldn't put any on. 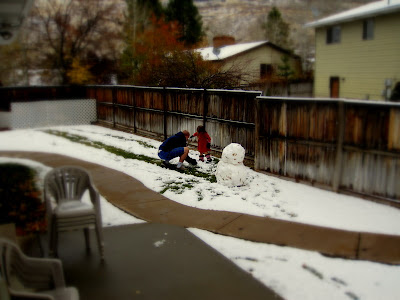 It's not terribly cold outside yet, anyway, as you can see from Andrew's shorts.
He went outside to build The First Snowman of the Season with her. She caught on quickly and was thrilled with the result. 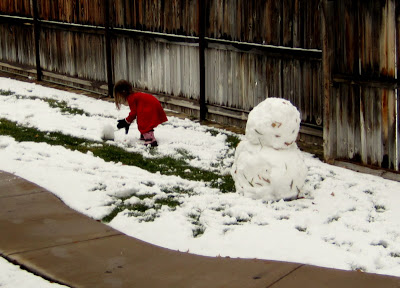 She was very worried about all the smallest details—she ran inside to get a carrot nose... 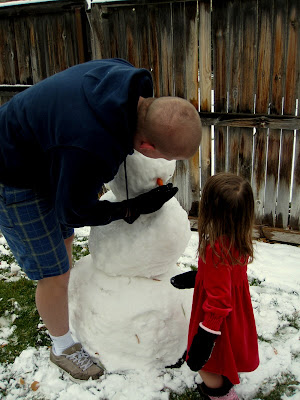 ...and used some wood chips from the garden for the eyes. 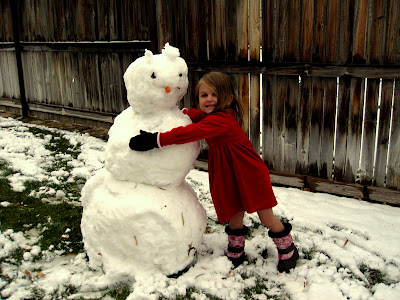 She also found some twigs for the arms. 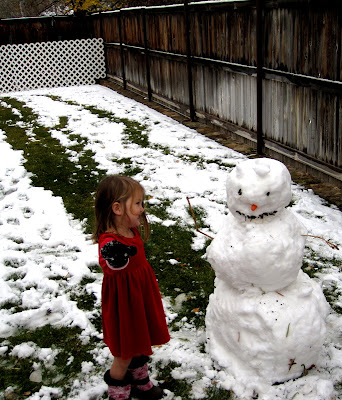 As pleased as Rachel was with her snowman, Miriam found him to be quite terrifying. She cried when I took her too close and thought about crawling away but stopped when she realized it meant she'd have to put her hands in that white stuff...so she started crying again, crouching over half-way. She was too upset to stand up again. I had to go rescue her. 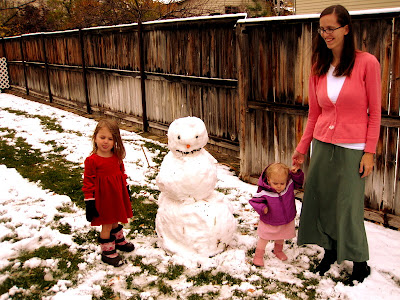 She happily posed for a picture when she was far enough away from the snowman that she forgot about him. 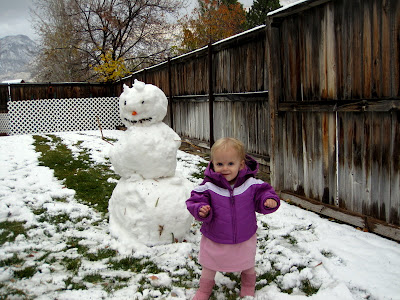 After we went back inside, Rachel made a baby snowman to stand beside the big snowman. 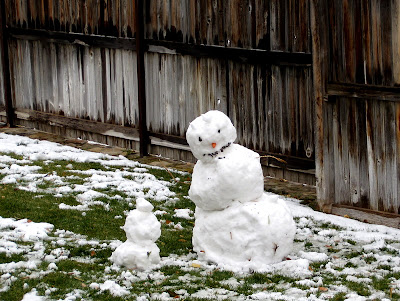 I'm sure this won't be our last snowman of the year...but I promise to not take so many pictures of future snowman and that I will force my daughter into a coat when it gets to be consistently below freezing.
Posted by Nancy at 9:36 PM