Miriam and her utensils

Since her introduction to utensils, Miriam has become quite fixated with forks. She won't eat anything unless she's holding one (or more). In the morning I usually just plop her in her high chair and give her handful of dry Cheerios and some raisins to pacify her while I get breakfast for Rachel and myself. She used to be happy with this routine but recently has taken to squawking after I walk away.
"What's wrong, Meme?" I'll ask.
She'll urgently grunt and open and clench her fist repeatedly. Roughly translated, this means, "But what about my fork, Mom?"
Cheerios and rasins have been staple finger foods for her since she sprouted teeth and yet she will no longer eat them, or anything else, unless she has her trusty fork. She's really pretty good at stabbing food and getting it into her mouth, considering she's one, but even when she's not successful with the fork she still insists on holding it with one hand while she shovels food into her mouth with the other.
After mealtime is over she still won't relinquish her fork. Instead she carries it with her away from the table. We took her out (somewhere, I can't remember where) a few days ago and she held the fork the whole way in the car, the whole time we were there (wherever we were), and the whole way home. She finds them quite entertaining... 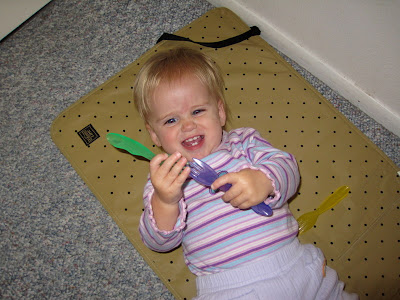 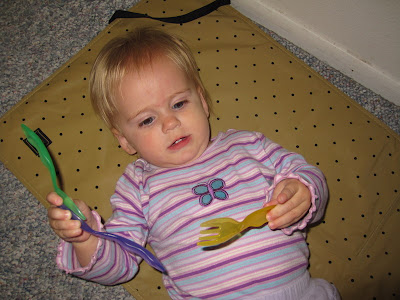 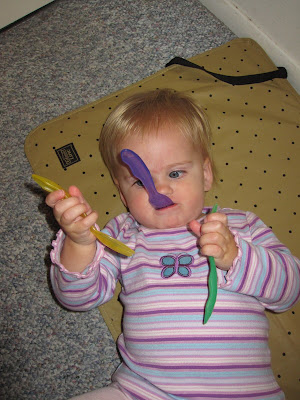 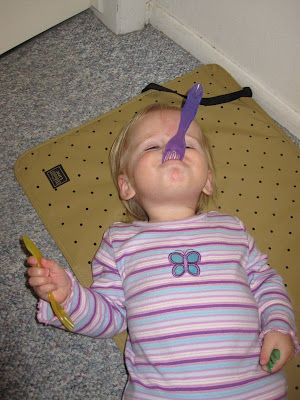 She is so attached to her forks that I actually put her to bed with one when she was having a rough time falling asleep a few nights ago. It's her comfort thing...
Whatever works.
Posted by Nancy at 2:12 AM