I’m in American history nerd heaven right now. For the next week I’m going to be gallivanting around Washington, D.C., visiting over a dozen different government agencies, lobbying firms, and international organizations (and maybe even NPR!) with a group of 11 other MPA students. It’s going to be an awesome week! 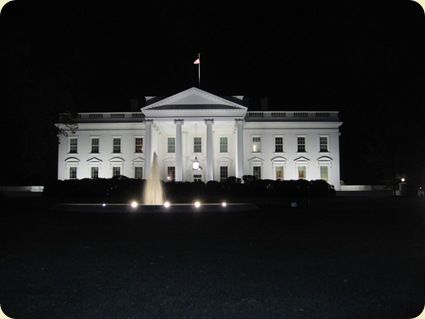 I left Utah early this morning. I flew out with Michael, one of my MPA teammates, and his wife drove us up to the airport so we could catch our 10 AM flight. The flight itself was pretty uneventful—with my shiny new iPod Touch I watched Close Encounters of the Third Kind and most of the new Star Trek (nerdy, I know).

We landed in Baltimore and immediately hopped on a special metro bus that took us to the end of the green metro line. Baltimore is surprisingly close to DC—the bus ride was only 30 minutes.

Figuring out how to use the metro system was daunting. Unlike Cairo’s simple two-line system, DC has different zones and different fares between the zones. To simplify things (and make them cheaper), they offer special week-long passes, but for varying hours. Mike and I asked different people at the ticket vending machines which pass we should get, but they were as clueless as we were. We finally just guessed and got the $47 (!!!) 7 day pass (which ended up being the right one, thankfully)

We rode the metro for another half hour and switched to two other lines before making it to our stop—McPherson Square. After exiting the metro station, we looked at Google Maps on my iPod to figure out where we should go. We didn’t come out of the exit I had planned on using when I mapped the walk, so we guessed again and started heading down a random street.

After a couple minutes of walking the Washington Monument peeked over some office buildings, which was way cool. We turned down the street we thought our hotel was on and walked for another block until we saw this on our left: 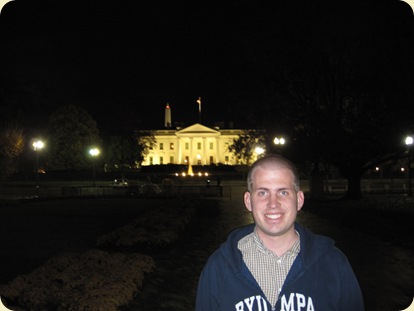 Since we were obviously going the wrong way, we retraced our steps and got to the hotel 5 minutes later (yeah, our hotel is like a 5 minute walk from President Obama. So cool!)

We met up with Richard, one of our classmates (and now roommate) and after quickly unpacking, we found a (very expensive) Subway for dinner.

Later, after all the other students arrived, we had a quick planning meeting before separating for the night. Some of us decided to be studious and responsible and go to bed early to get ready for the 4 visits we have tomorrow. I went out with a few other students and visited monuments until midnight. That’s how responsible I am :) 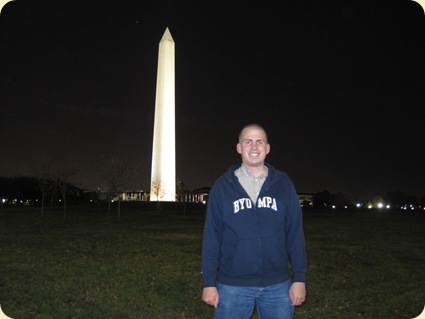 We walked back down to the White House to take more pictures before heading over to the new World War II memorial, one of DC’s newest monuments (dedicated by Bush II in 2004). It’s right between the Washington and Lincoln monuments and is a spectacular work of art. 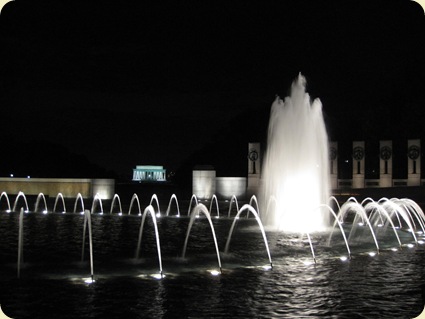 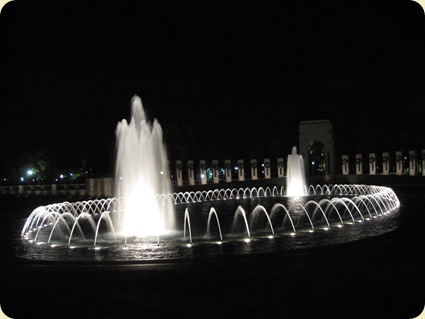 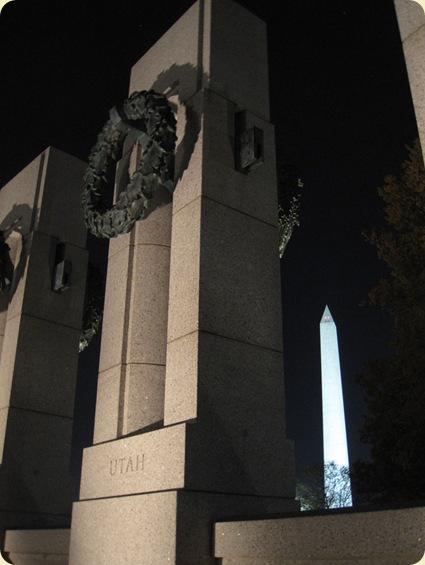 The memorial consists of two half circles of columns dedicated to each of the states and territories involved in WWII, with each half circle representing the Atlantic and Pacific theaters. There’s a massive fountain in the middle of the columns, and the water is pretty loud—I called Nancy and the girls from the monument and had to wander off to find a quieter place between two of the state columns.

We then walked up the side of the reflecting pool to the Lincoln Memorial. The view from the steps of the memorial was breathtaking, especially at night. 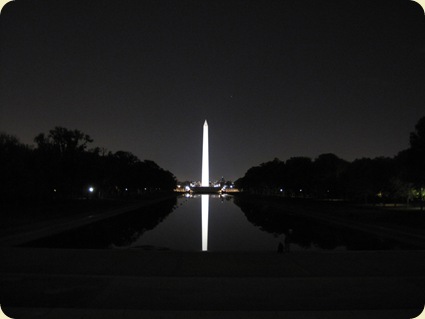 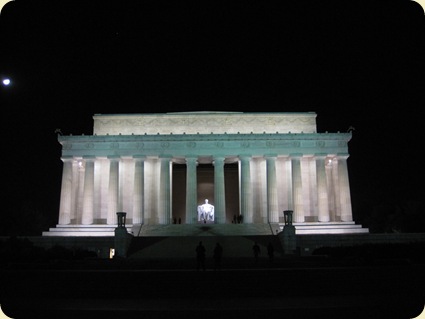 The inside of the memorial was mostly empty. Most of DC is practically empty on Sunday nights. There are no cars on the streets, all the stores are closed, and the city is extraordinarily calm and peaceful. 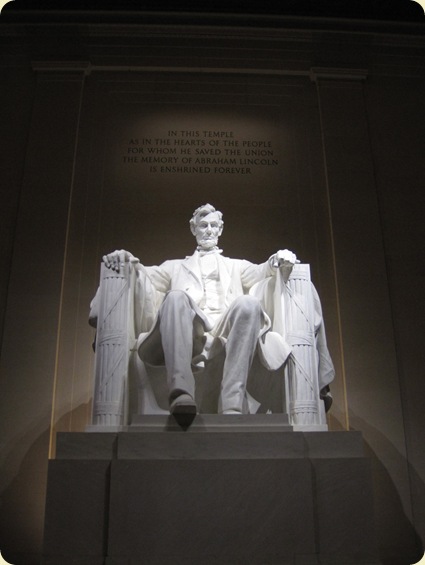 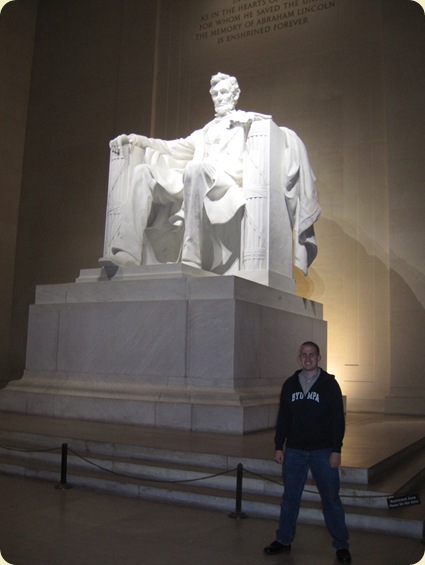 After checking out the mini museum in the basement of the memorial, we started our long walk back to the hotel, passing tons of agencies, businesses, and awesome looking museums on the way. If I ever get a job with the federal government (like with USAID or the State Department) I would love to spend a couple years in DC just to be able to see all the museums and monuments. This place has so much!