Rachel had her first full day of school on Thursday. She has to be at her bus stop at 8:15 and doesn't get home from school until 4:15. That's a long day! I was so worried about how we'd each handle that kind of separation but I think we did alright.

Getting ready for school in the morning was quick and easy because she was so anxious the night before that she laid out her clothes and packed her backpack and lunch. I have a feeling doing those things will seem like more of a chore later on in the year... 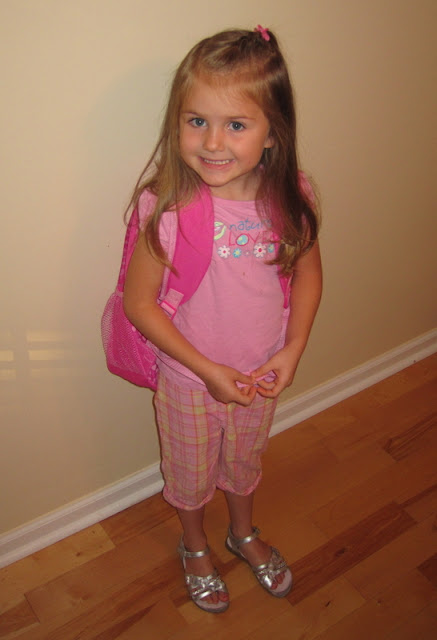 We went outside to take a few more pictures before walking to the bus stop. Rachel saw our neighbours and waved to them and Miriam took that opportunity to jump in the frame. I took a picture and then Rachel booted Miriam out saying, "Hey! Why is she in my first-day-of-school picture?!" 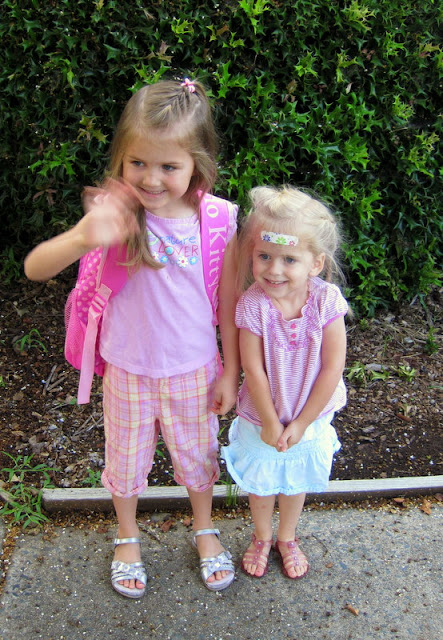 Miriam is fairly convinced that she's going to start school at Rachie's school and have Rachie's teacher and be in Rachie's classroom. I'm trying to convince her that that won't happen for a couple more years. 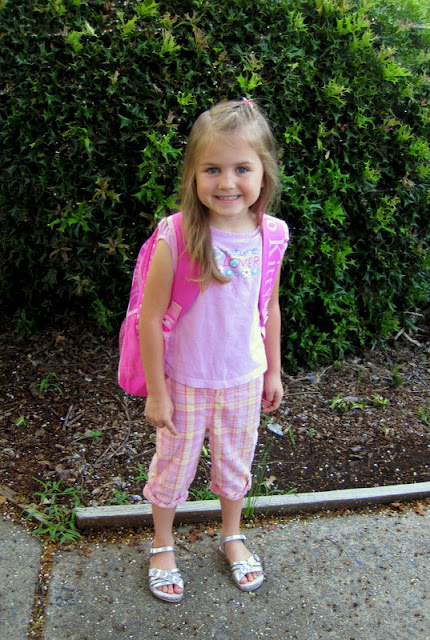 Rachel was a little bit nervous while we were waiting for the bus—she said that she had butterflies in her stomach—but we met a little boy at the bus stop (the only other child at our stop) who is in grade one this year. He had Rachel's teacher for kindergarten last year and he really enjoyed her. That made Rachel feel a bit better.

When the bus pulled up she gave me a quick hug, turned around, ran up the steps of the bus and found a seat as quick as a flash. I think she was afraid she'd lose her nerve if she tried to make her way to her seat all calm and collected.

Miriam and I walked back to the house and—I am not going to lie—we had a great day. No one had anyone to fight with. Miriam got to choose music to dance to in the living room and she got to dress up as Dorothy instead of being told she had to be Glinda. And the best part was that Miriam and Benjamin both take an afternoon nap so...awesome! I hardly knew what to do with myself since about 90% of my time is spent refereeing childhood spats.

We made some popcorn while we were waiting for Rachel to get home from school. That was a long, nerve-wracking wait! Andrew must have read the chart wrong or something when he wrote down her schedule because he wrote down that she'd arrive home at 3:52 but the bus didn't show up until 4:15. I was going out of my mind with worry. It was also quite a long wait for Miriam, who was dying to get into the popcorn.

Still...that's such a long day for a little one, isn't it? It's a good thing Rachel has lots of energy. She seemed to love school. We peppered her with questions over dinner.

She reported that her first day of school was "good."

Her favourite classes were gym class and recesses, though she reported that she also got to play with blocks, play dough, puzzles and that she got to play a game on the computer.

She didn't sit by anyone on the bus on the way to school but on the way home she sat by three people (sounds squishy), "and, yes, Meme, I talked to them." That's one of the main reasons she wanted to take the bus—so that she could start making friends right away—though she was a little bit scared of the bus at first. And apparently her driver told some kids to "move on back," but not her.

She's especially excited for science class because she wants to be a scientist when she grows up, specifically an astronaut, though she thinks now that she'd also like to be a teacher. She's already concerned that "astronaut class" and "teacher class" will be at the same time when she gets to college. And what if she can't even be both? Can you be two things when you grow up?

I assured her that plenty of people switch careers and that there was no need to lock her college schedule in quite yet.

Andrew told her that he knew of a teacher who decided to become an astronaut.

"Really?" Rachel and I said together.

"Yeah. She was on the Challenger."

"And the astronaut?" Rachel asked.

"She died in the explosion," he affirmed, a little too casually.

"Oh," choked Rachel, looking a little like the butterflies had returned to her stomach.

So many emotions for her to process all at once—the exciting prospect of an amazing role model (teacher turned astronaut) crushed within three seconds. Not to worry, Rachel, because not every astronaut dies in a rocket explosion.

Interestingly enough, that "astronaut," Christa McAuliffe, was a social studies teacher. I was expecting her to teach something a little more...science-y. She never trained to be an astronaut; instead she was part of the "Teacher in Space" program. Her backup, Barbara Morgan (an English teacher), did venture into outer space twenty one years after the Challenger disaster. We probably should revisit this topic now that I've read all about it on Wikipedia (all hail!) because Rachel was a little freaked out.

Rachel didn't have school today (only half of her class went to school on Thursday; the other half had their first day of school today) and for the life of me I could not figure out why I was so apprehensive to send her to school in the first place. She was a little terror today, bossing her sister, screaming at everybody, refusing to do any chores, begging to watch television. I can't wait for the next school day...which unfortunately isn't until Tuesday...

That isn't to say I don't miss her when she's gone. I do. And part of me really wishes we had half-day kindergarten because she's my baby and she's supposed to be home with me just like she has been for the past five years! She's all grown up and going to kindergarten, though...and that's killing me. At the same time, though, she is energetic and social and super inquisitive. I think she'll thrive in school.
Posted by Nancy at 12:14 AM