I'm not sure why I'm doing this post the day before Rachel comes home from school on the last day of school in September since it includes several projects that she's worked on at school. Chances are she'll bring home some spectacular project and then I'll have to do a new blog post (which you all know will be a real burden (kidding)). I have some time and both my arms right now, though, so I'm going to write anyway.

Last night we went to "Literacy Night" at Rachel's school. They had someone there promoting our regional branch of Durham's public library—little did they know we had gone to the library earlier that day to get library cards and check out some books. Our regional library is small...but awesome.

We got to meet Rachel's new principal, who is very nice, and have a little dinner with her in the cafeteria. The school supplied Subway sandwiches and were evidently planning on more people attending because there were a ton of leftovers. Our school struggles for support, evidently—they can't even get people to come out for a free meal. We are still in grad school, though, so we never say no to free food (it's free, people)! 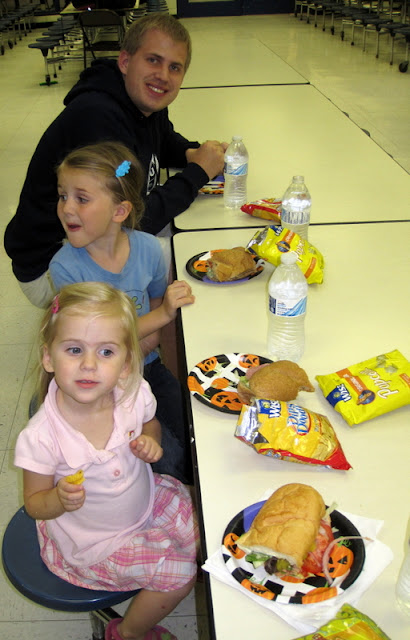 (I had to laugh about these two pictures. Miriam and Rachel aren't paying attention in the first one and Andrew's eyes went all wonky in the second one. It's a wonder we ever get any decent pictures of our family.) 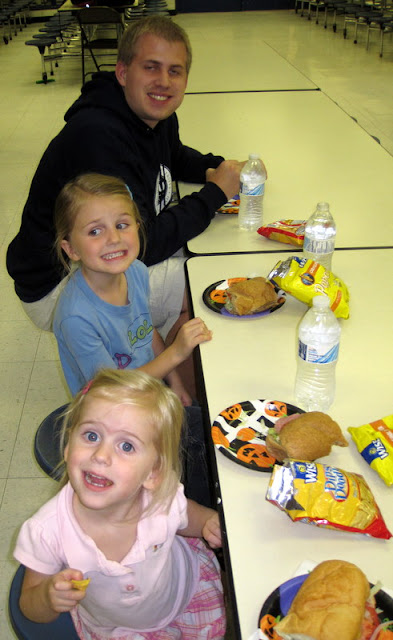 Rachel was excited to give us a little tour of her school. The hallways are all outside, which seems rather strange to this Canadian girl who is used to indoor hallways (and cloakrooms, which they don't have here at all). Rachel's classroom opens up directly outside, which does come with benefits. Their water table, for example, is outside their classroom in the little quad area so any splashes go toward watering the grass instead of soaking the carpet. 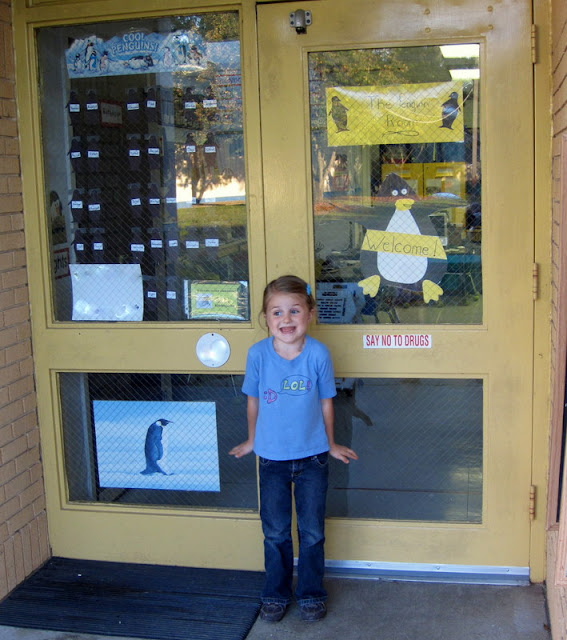 Every kindergarten class has their own mascot and Rachel's is the penguin class. She's very happy about this and has come home with several drawings she's done of penguins. At the bottom of this one she wrote "I see A PnGWn" (she's hooked on phonics): 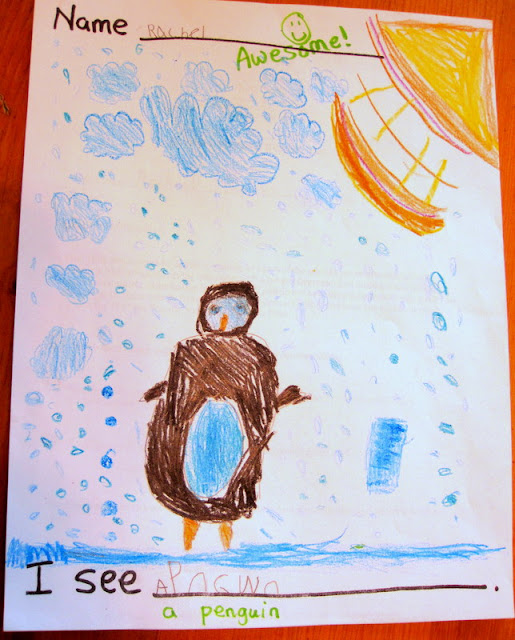 There's a beautiful mural in one of the little quad areas at Rachel's school. She wanted to be sure she was standing directly under the pony for this picture: 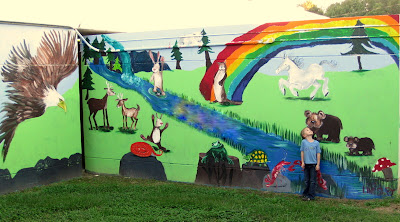 There are a lot of decorations on the sidewalks in red, yellow, and blue: bunnies, ducklings, footprints. Unfortunately, they also include these balloons that might better be used as a diagram in sexual education than as sidewalk decoration: 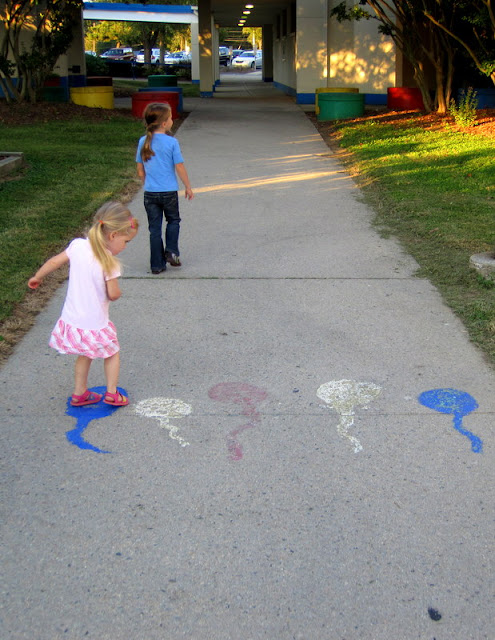 Andrew and I both looked at each other with bemusedly raised eyebrows when we came to them. But perhaps they're not meant to be balloons at all. Perhaps they're supposed to be...tadpoles. Or something.

Rachel's school is doing "common core," which means that they are teaching the same curriculum that 48 other states in the United States are teaching at the same time. I think this could be a good thing (all the children are learning the same basic principles) but also a bad thing (not as much room for teacher-driven initiatives). I do wonder why we haven't heard more of a stink about it in the news because it doesn't seem like a thing republicans would smile on. It does, however, explain why both Rachel (in North Carolina) and Emmy (in Utah) were doing a gingerbread unit the first few weeks of school:

I thought it was just a crazy coincidence (and also a poor time for a gingerbread unit—a better time for a gingerbread unit is November/December, in my opinion) that they were both doing the same kind of things. Turns out it's no coincidence and is instead a concerted effort to make sure they are learning the same things (which seems trivial in kindergarten but becomes a much bigger deal in upper grades).

One thing Rachel's been working on is writing her name with correct capitalization (ie. a capital letter in the front followed by lowercase letters). She learned how to do this in preschool last year but didn't practice writing her name (as) much over the summer so by the time school rolled around she felt more confident writing her name in all uppercase. We worked on it at home for a bit and now she's comfortable writing her name as Rachel instead of RACHEL. She was quite devastated when she came home to find that Miriam had practiced writing the letter M all over her worksheet: 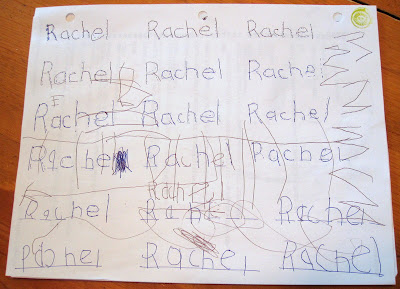 The Durham County Heath Department sends around dentists to check the teeth of children in public schools (my guess is that they're actually dental students, but I don't know). Rachel passed her exam with flying colours and drew this picture of it later in the day: 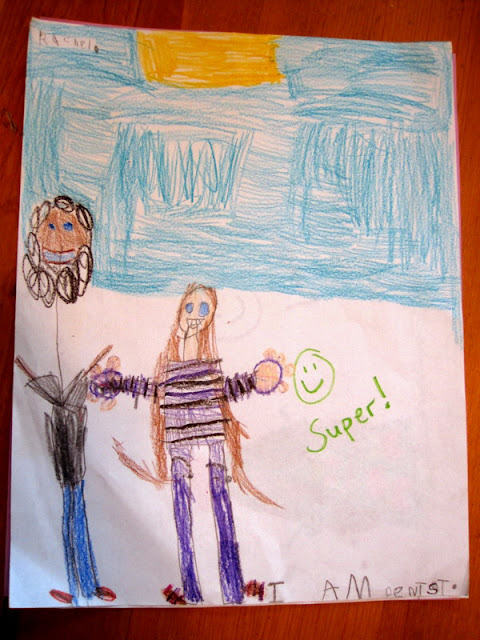 Do not be fooled by her sentence at the bottom of the page. It might look like it says "I am (a) dentist," but what it really says is, "I am at the dentist."

Her dentist, you might have noticed, is black. It's certainly been an interesting transition for our family to move from a predominately white area of the country to North Carolina, which is much more diverse. We've had many dinnertime conversations about black history: slavery, civil rights movement, etc. Skin colour is also a new favourite topic in our household.

"My teacher is from Utah," Rachel told me one day.

"Listen to her talk—she's clearly from the south. Why do you think she's from Utah?"

"What do you mean she's got skin colour?"

Enter a lengthy history lesson reaching from the days of Christopher Columbus to the time of Abraham Lincoln to the era Martin Luther King Jr.

"...And that's why there are a lot of black and white people in the south."

We've clarified that we can't exactly say that someone "has skin colour" when we mean that they're caucasian because everyone has skin colour even if it's not our skin colour. Perhaps it's a lame comparison but we pointed out that just because Miriam has blonde hair doesn't mean she can say she has "hair colour." After all, Rachel has brown hair. So my girls have settled on the terms "peach" and "brown" to refer to both to people and crayons.

I don't know how (white?) children naturally designate the peach crayon as "skin colour." I'm hoping to volunteer in Rachel's classroom in the near future and I think it will be interesting to see how the black children in her classroom handle the "skin colour" situation. Do they classify the brown crayon "skin colour?" I frankly don't know, but I imagine they would.

My mom once got me a skin tone pencil set when I was in elementary school. Perhaps Rachel would enjoy one, too.

Here's another one of Rachel's drawings—of herself wearing the cherry dress Naanii gave to her: 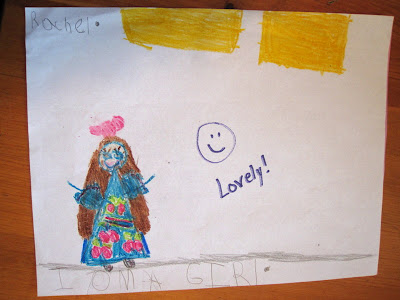 Here's a picture of a dolphin (hint: its mouth is on the left side of the page...I think): 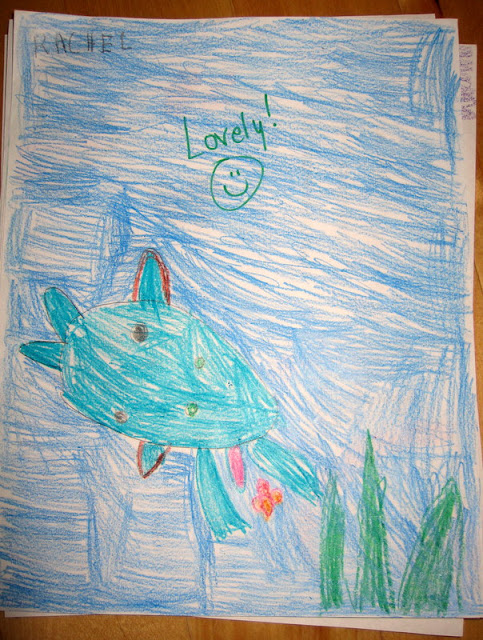 And here is a picture of a deer: 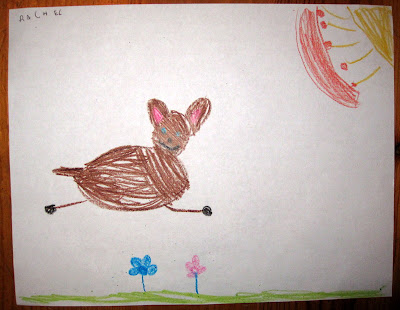 Now that we've got a full month of school under our belts, I feel like we're starting to settle into a routine, which is nice. Rachel's adjusting to school and the bus and everything quite nicely. Andrew and I were talking about how brave she is to have handled it all so well. She's still so little and we've thrown a whole lot of change at her—and a lot of it has been scary change—but she's handled it all with grace and we're very proud of her.

I have no greater joy than to hear that my children walk in truth and last night Rachel's teacher had nothing to say but good things about her:

"Rachel is my angel!" she gushed. "She is such a sweetheart and a leader in our classroom. She's so bright and is such a good listener. I just love having her in my class!"

Her teacher's aid said that Rachel is artistic. "She always puts such wonderful details into her drawings and does all of her work so neatly and carefully."
Posted by Nancy at 11:15 AM