The girls have been diligently slaving away at their chore charts for about three weeks now. We set up a simply complicated reward system, based on the one at Rachel's school (which seemed to motivate her so we figured we'd give it a try at home).

The girls each have their own chart with three set chores a day: their morning routine, their chore, and their evening routine. Morning and evening routines have chores in them—such as making beds, putting laundry in the hamper, tidying their bedroom, etc. They can mark those things off on their chart as they do them.

At the end of the day we rank their attitude on a scale of good-okay-bad.

They can earn extra squares by going the extra mile (so if you ever hear my kids ask if I have any extra jobs for them to do, this is why) or by cooperating really well or if they earn a full week of happy faces or pretty much whenever we want to reward them. This gives Andrew and I plenty of opportunity to recognize their good behavior. They can also earn their squares in retrospect—say if we ran out of time to do chores (like we did today) then they can still earn that square the next day if they do both days' chores.

It sounds more complicated than it actually is, I promise, and so far it's been working well.

We promised we'd take them to pick out pumpkins the next day and they went to bed with vision of jack-o-lanterns dancing in their heads.

Thursday was actually slated to be a relatively busy day—I had visiting teaching in the morning and Benjamin had a doctor appointment in the afternoon, among other things—but Andrew said, shortly before midnight, "Hey—weren't you going to look up pumpkin patches or something? We should make this fun—I'm ready for an adventure. Aren't you?"

I remember when we'd settled on pumpkins as a prize a couple of weeks ago that I had said something to Andrew along those lines. But I'd totally forgotten about it and was completely geared up to run the girls to Kroger and let them riffle through the box of pumpkins inside...but the girls had worked so hard and, frankly, I was ready for a family adventure, too!

We began researching pumpkin patches and I was sorely disappointed. Going to the pumpkin patch has been commercialized so much that visiting one would surely break the bank. Sure, they look like a lot of fun with their mazes and trains and carnival games, but what about the sweet simplicity of racing around a pumpkin patch, finding that perfect one—plump and juicy, warm with sunshine—and taking it home? Couldn't we just be excited about that without being bombarded with...everything else?

Almost everything we found last night was a place like "this," with a $10-15 admission, though not all of them offered a "free pumpkin" and some of them charged for admission and had separate ticket fees for many of the "attractions" on the farm. We were looking at upwards of $40 just to set foot in a pumpkin patch!

I didn't want to go somewhere where we'd have to be dragging the kids past colourful advertisements for exciting rides that we couldn't possibly afford; I didn't want a day full of nos.

I wanted a day filled with yeses!

I wanted my girls to see a pumpkin sitting in the dirt. That's all I wanted.

Finally, I found DJ's Berry Patch. They have pumpkins and chrysanthemums in the fall, strawberries in the summer, and the occasional hayride (though there were no hayrides today). It was exactly what we wanted and it must have been meant to be because it was one of the few decent places we found online (though looking tonight I found a couple more). We'd been wanting to take the kids to visit the temple for Family Night, anyway, and both DJ's and the temple are in Apex, so it worked out well.

Andrew left Benjamin and I at the doctor's office while he and Miriam went to pick Rachel up from school—she was thrilled to be in the "car rider" crowd today. Then they all came to pick me and Benjamin up. We got stuck in some gnarly traffic on our way out there and from the sounds coming from the backseat, our girls were near death from having to wait so long to get to the pumpkin patch. I kept passing back snacks but no number of fruit snacks or tortilla chips could quench their desire to get out of the car.

Finally the GPS dinged. "You have arrived—Pumpkin Patch."

Andrew pulled into the parking lot and hopped out of the car.

"But there are pumpkins," Andrew pointed out. 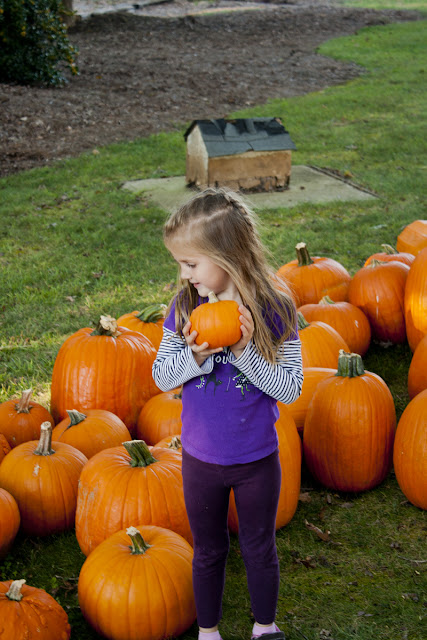 It's true; there were pumpkins—the girls were already frolicking among them. 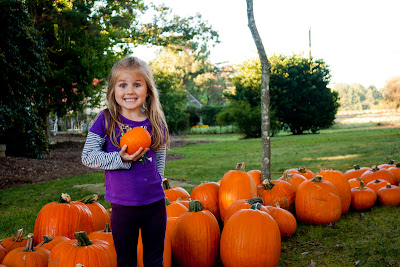 Andrew and I went around hunting for information.

"It's an honour-system sale," Andrew said. "You just pick a pumpkin and then put the suggested donation in the locked box nailed to that tree. The proceeds go to their youth group."

That sounded alright. And the girls were having a great time.

"What are their suggested donations."

"Well," said Andrew, holding up a puny pumpkin, "They want ten dollars for one this size."

"Ten dollars?!" I gasped. "For that?! You have got to be kidding! Look, they said 45 cents per pound and unless that pumpkin weighs...twenty pounds...this can't be the right place!"

Andrew got out his trusty iPhone and looked up their address online.

"Oh...fourth driveway. This is not the right place."

I didn't say 'I told you so,' but I may have said something similar and then somehow we managed to get our tearful children loaded back into the van.

"But you said we could go to a pumpkin patch," Rachel wailed.

When we arrived at the pumpkin patch—three driveways down the road—Rachel was ecstatic. 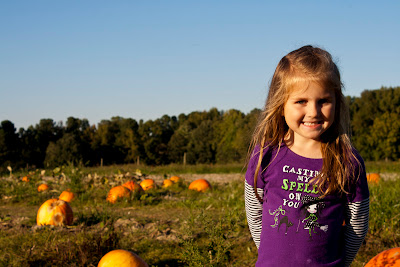 Fields! Barns! And pumpkins galore! And all for 45 cents per pound! 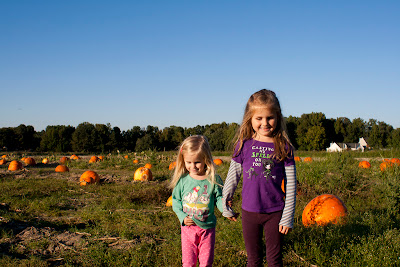 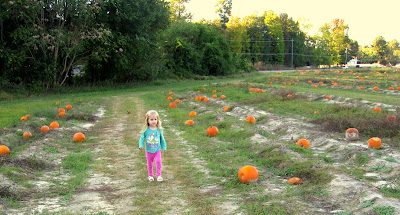 They had some whopping big ones there... 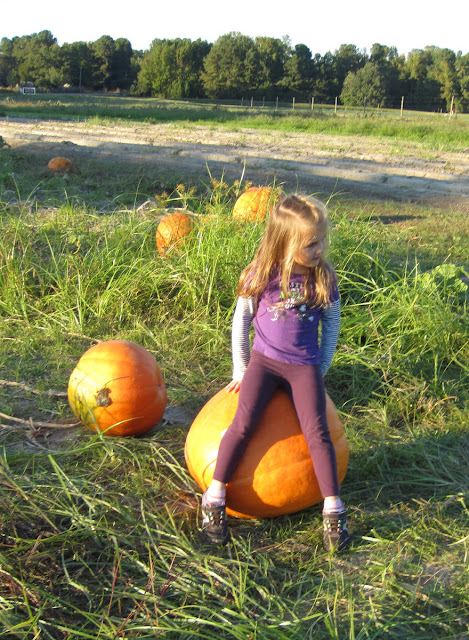 We couldn't even imagine how much they'd cost (but would later learn that even the biggest of pumpkins only came to around $35) so we wandered off to the outskirts of the field where the smaller pumpkins were growing and let the girls pick one out. 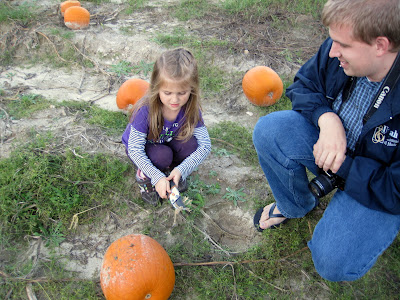 Rachel helped cut the vine—though it pulled right off the pumpkin instead of cutting—and they were very proud of their selection. 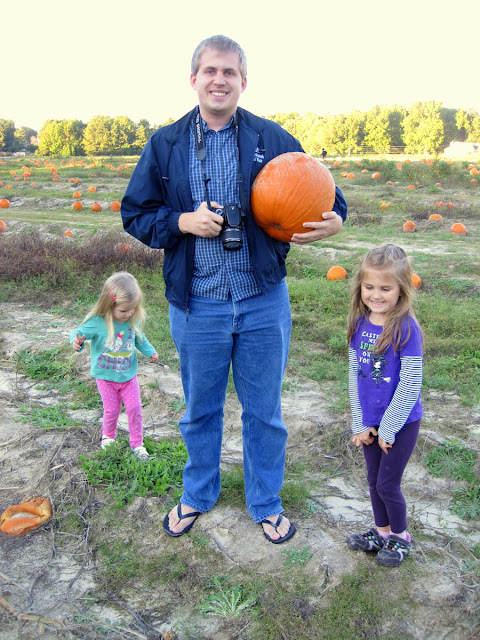 A friendly farm-hand came to take our pumpkin to the weighing stand while we enjoyed wandering around the pumpkin patch a while longer.

The girls were dashing all over the place, leap-frogging over pumpkins, trying to find the biggest ones! 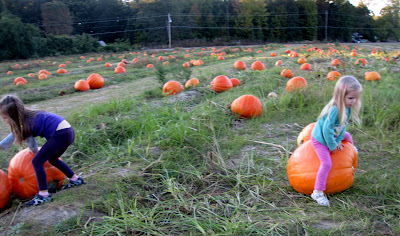 Benjamin was less impressed with the pumpkin patch and was more concerned about his sore little legs—Miriam tried to warn him about those "scary shots" he'd have to get at the doctor, she tried to tell him not to go to his appointment, but he didn't listen...and he paid for it. 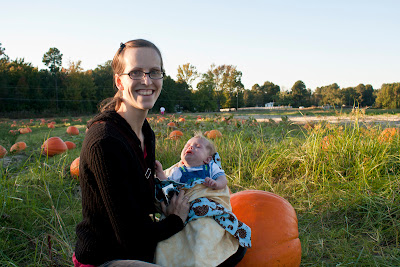 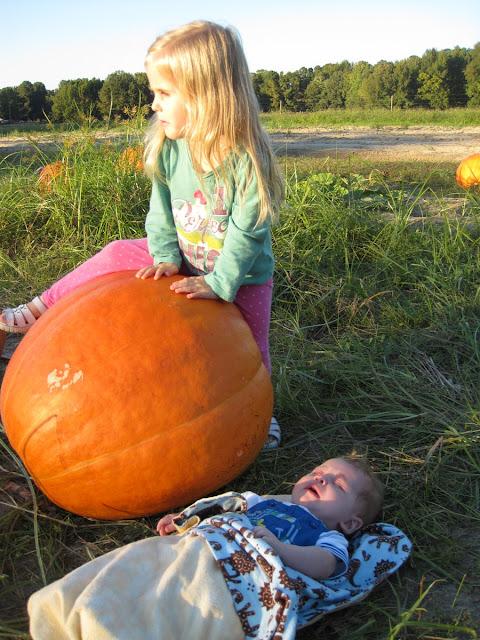 Our attempts at a fall photo with our three happy children were in vain; Benjamin was inconsolable. 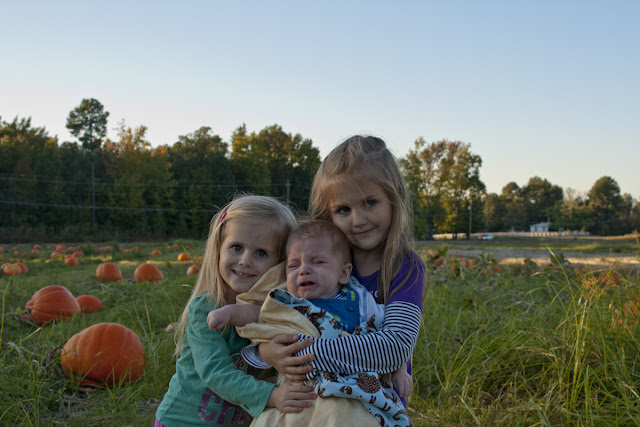 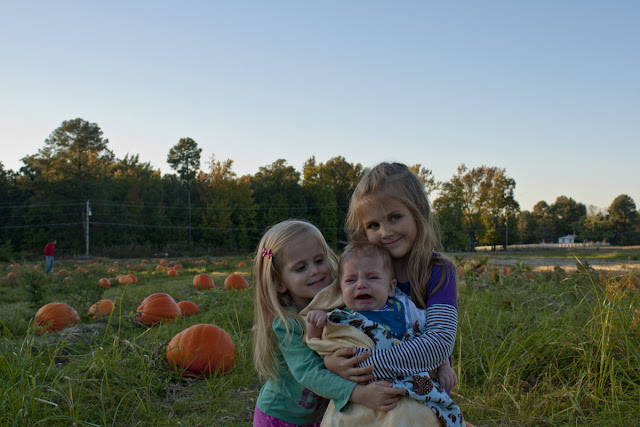 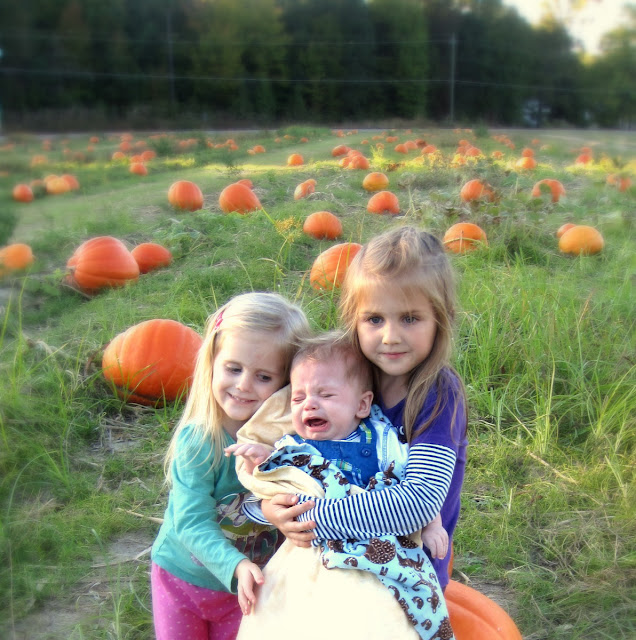 Perhaps part of his problem was that he'd wiggled completely out of my swaddling job...but we kept trying to capture the moment anyway... 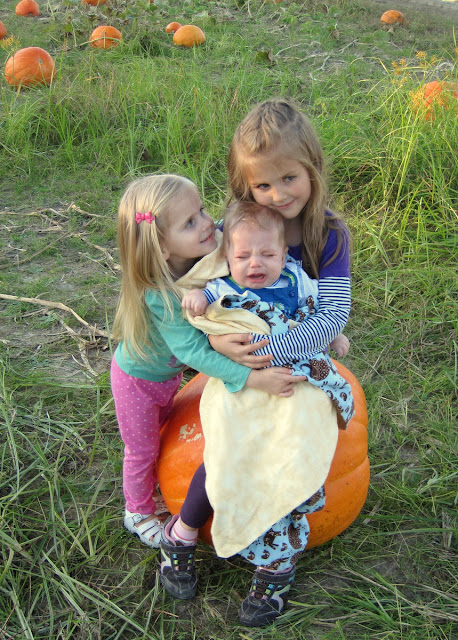 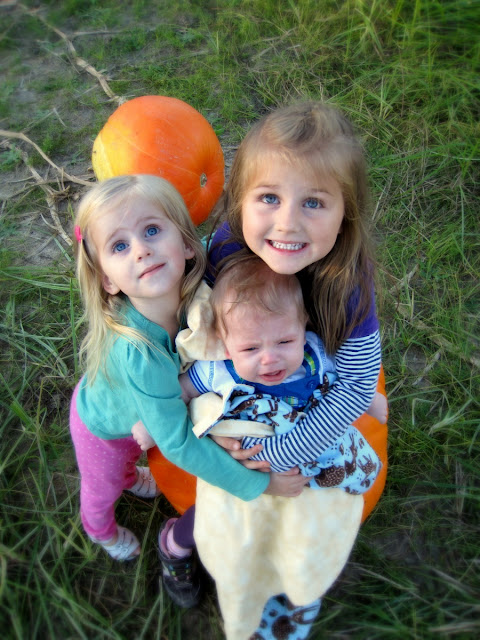 When we were finished in the pumpkin patch we spent a few minutes at the storefront, looking at the big pumpkins there. 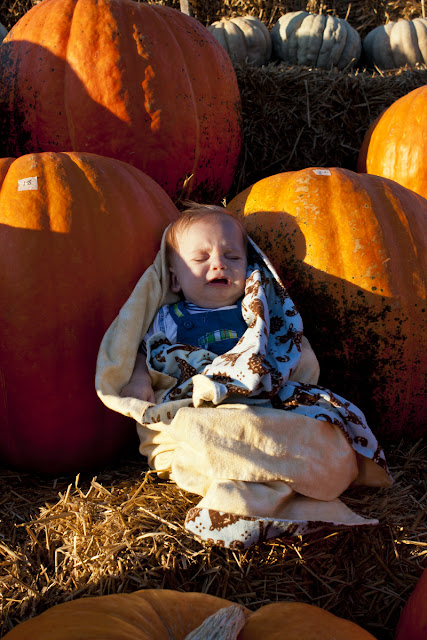 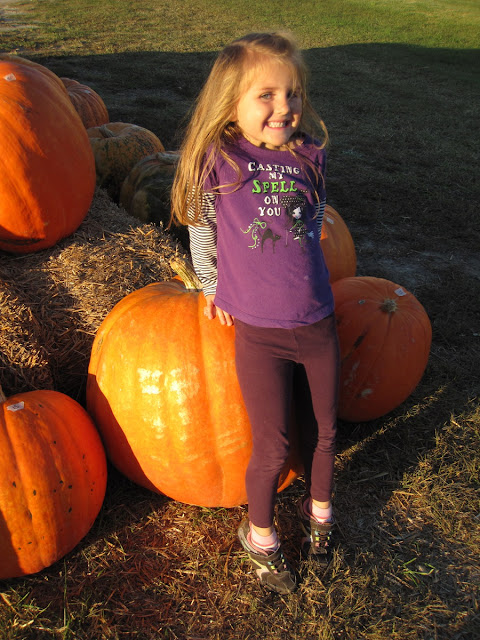 And rolling around in the hay a bit... 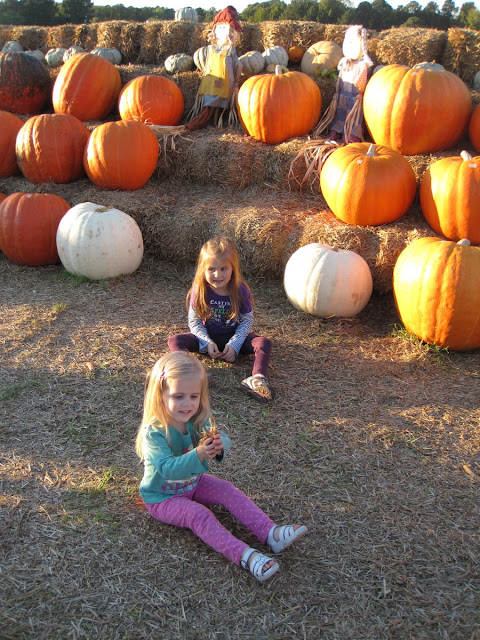 Then we stopped by the Baptist church to pick out a few of their "baby pumpkins," which were only 50 cents a piece (which seemed reasonable since the ones on the farm were $2 each!!). So now we have one big pumpkin for our family to carve and some little pumpkins for the girls to decorate (sans cutting utensils). We're set for Halloween!

The temple was a short drive from the pumpkin patch. I was shocked to see how small it is—I've never seen a mini-temple before. It was still very beautiful, of course, but so...tiny. 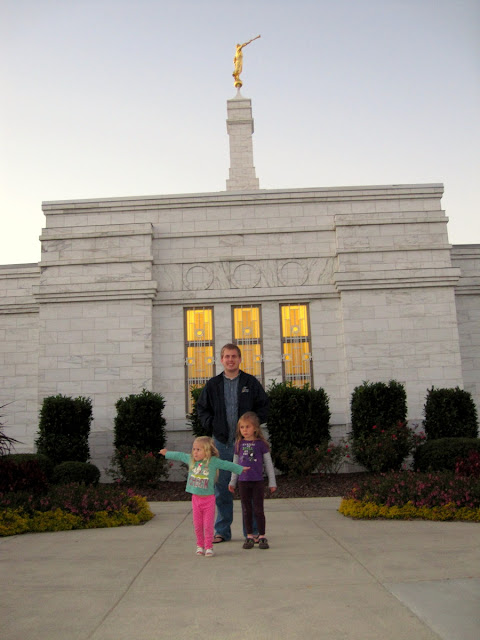 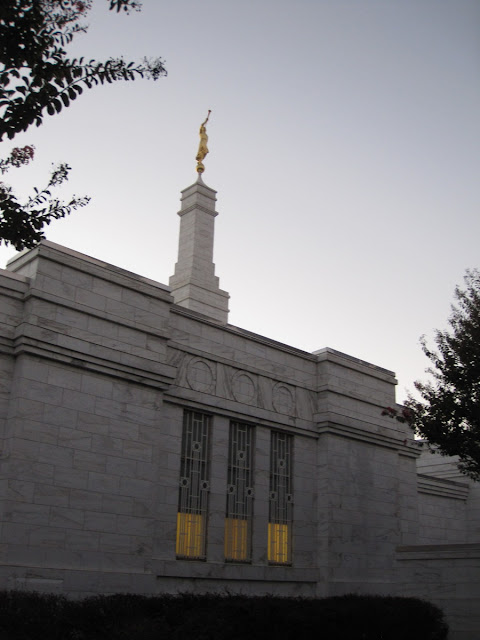 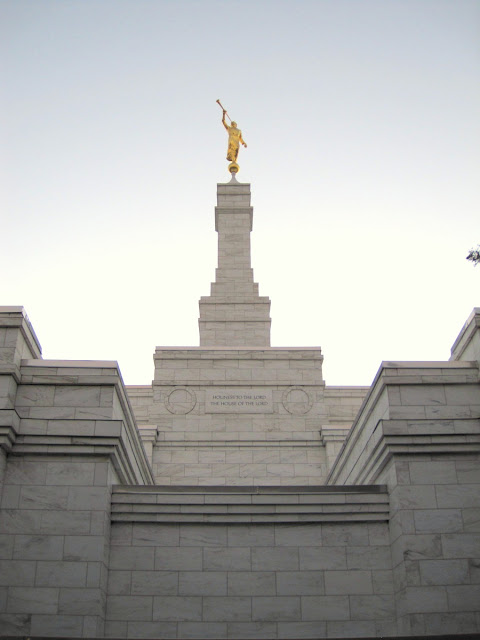 Benjamin, fed and properly swaddled, was a happier participant in this family photo—gotta love that self-timing function: 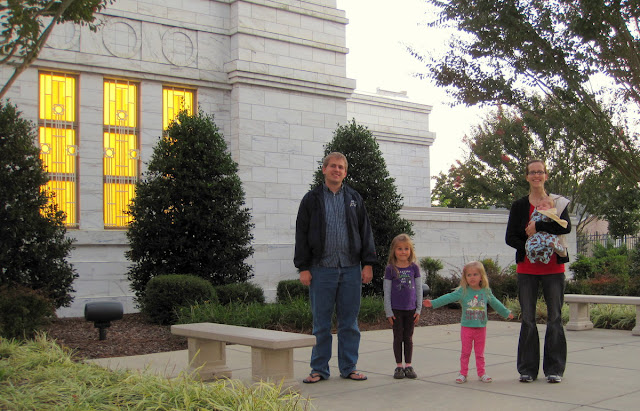 We enjoyed walking around the peaceful grounds and then drove down the street to eat at Waffle House. It was already past 7:00 and we still had to drive home and feed the kids. We decided it would probably be better if we fed the kids and then drove home. It was.

We sang/recited/talked about the Articles of Faith the whole way home. It's our go-to lesson/scripture study whenever we neglect to plan better; but at least we always have a lesson...and our kids will certainly know their articles of faith!
Posted by Nancy at 9:20 AM