Monday was Canadian Thanksgiving so of course we had to celebrate. Things were a little dicey after school so I was completely frazzled by dinnertime, and thus we had boxed stuffing, instant mashed potatoes, and green beans. If I could have put down the screaming baby for a minute or convinced the other two children to do anything other than pleasing themselves I might have thought to cook up some chicken breasts too. That would have turned this meal into a feast.

If you're wondering how things got dicey, the story is as follows:

Rachel came home from school and started on her homework right away. Her homework was a worksheet with six rhyming pairs. She had to cut out six pictures and glue them beside the picture they matched on the worksheet. She had five days to do this. It took her two minutes.

On Mondays Rachel helps me make dinner so we usually go for big culinary affairs: mac'n'cheese, tuna fish sandwiches, that kind of thing. Boxed stuffing is for really special occasions. Usually she likes helping with dinner but she had started colouring her homework and wanted to finish.

"Alright, I'll give you five more minutes," I said.

"Mom, my teacher said not to rush me on my homework—you have to give me all the time I need."

"You're finished with your homework. You did everything in the instructions. Colouring the page is optional and you have five days to do it. It's getting late. I'm starving. Let's make dinner."

"Can I just colour for a little bit longer?"

"I said you could have five minutes."

"But I want to do a really good job."

"Well, colour for five minutes and then put it away for dinner and finish colouring after dinner."

I left her to colour in peace while I tried in vain to make Benjamin stop screaming. Sometimes...that baby...I tell you...he can scream. When Rachel's five minutes had expired I told her it was time to clean up the crayons and make dinner.

"Mom!" she yelled. "I think my homework is a little more important than your dinner!"

"Rachel," I growled. "I think it's not. Actually, I know it's not—because you have five days to do your homework and we only have one night to eat tonight's dinner and everybody is hungry now."

Anyway, she and I can really get going at it but we eventually managed to get the crayons picked up and got dinner on the table (such as it was). Rachel seems to constantly be annoyed that I want things "my way" as if feeding her somehow inconveniences her. She admitted while we were making dinner that she was starving. I told her that sometimes when we're hungry we feel grumpy. We agreed that that was probably our problem and everyone's mood greatly improved over dinner.

"Mom," Rachel asked. "Is this Canada's Thanksgiving or America's?"

"Well, why do we celebrate holidays from other countries? That doesn't make sense."

"Sweetie, where is Mommy from?"

"So doesn't it make sense that I would want to celebrate my own holidays?"

"Wait. You mean, you're actually from Canada?! You have your own country?!"

"Yes. I am actually from Canada. But I have two countries—America is my country, too."

"So, like, you were born in Canada?! But that's a different country, Mom. Whoa. I just...whoa. I just can't even think about this. Canada."

Apparently she'd never really processed that little detail all the way through. Once she got that all sorted out (I didn't feel it was a great time to remind her that she's also a dual citizen for fear of breaking her brain) we started discussing the construction of our Thankful Tree. This got the girls rather excited so we finished up with dinner, cleared the table, and broke out the destruction instruction construction paper (Rachel's still working out its name).

By next year Rachel will probably be completely ready to begin managing this tradition. She was already barking commands this year—"That branch needs to be longer! Miriam, leaves don't look like that! You can't use blue; it's not a fall colour!" I'm not sure how I feel about passing on the torch. Somehow I thought I'd be in charge of things (like scissors...and Thankful Trees) a lot longer but the thing about kids is that they just...grow up. You can't stop them. *sigh* 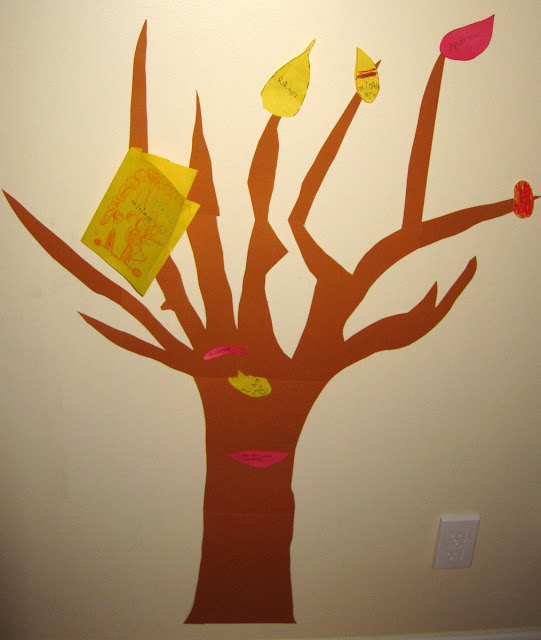 The first leaf Rachel put on the tree said 'Rachel,' because she wanted to be grateful for herself, first. We'll just pretend that she's really thanking God for the wonderful life he's given her but because she couldn't write that she wrote her own name instead.

Miriam wanted to be thankful for books, so she made a book—and only folded it in half (instead of twenty times) to make it a functional book. There's a picture on the inside. It kind of made Rachel furious because "that's not a leaf, Meme!" but I explained that another word for a piece of paper or a page in a book is leaf. Miriam just didn't understand the assignment, that's all.

I was thankful for Andrew.

"Don't you mean Benjamin, Mom? Aren't you happy Benjamin is out of the hospital after he was preemie-born? Aren't you glad he didn't die or anything? You should be thankful for Benjamin on your first leaf."

And she was upset with me for wanting things my way before dinner?!

Those were the only there leaves we put on the tree that night (the others were added since then). We also started making a little leaf chandelier. We'd gathered leaves days (many, many days) before and the girls have been bugging me about making a craft with them ever since. We'd pressed them between books but that's as far as we'd gotten. So I came up with this and I kind of like it. 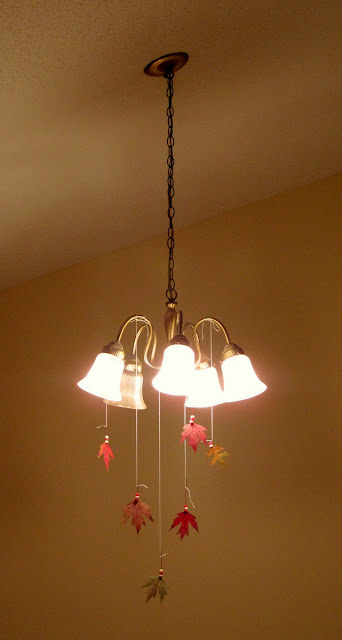 We slipped some red and white beads on the stems of the leaves and then tied them to the chandelier above our kitchen table. It's very autumnal—classy with a dash of preschool, like the rest of the decor in our house. Okay, so maybe the rest of our house is preschool with a touch of class. Whatever.

On Tuesday morning Miriam had just sat down to eat breakfast when she raced into my bedroom and said, "Mom, I've got to tell you something!"

"I am thankful for breakfast!" she panted dramatically (because the dash from the kitchen table to my bedroom door was such a workout).

So that's on the tree, along with Miriam's "star-berry milk," which is also known as strawberry milk. Rachel also added Miriam and Mom.

We forgot to add any leaves today but there's plenty of time for that, isn't there?

But I can make a mean pumpkin pie.

Maybe someone will invite us over for dinner...and I can bring a pie.