For the first time in our married lives we have a lawn to mow—granted it's about 50% wild onion, 25% clover, 15% other stuff, and 10% grass, but that's just kind of how it grows out here—and until today Andrew'd been the only one to mow it. He was rather excited to mow it at first, declaring he'd do it Saturday, which I'm sure he fully intended to do.

Two weekendss, ago, however, I was sick so he spent his Saturday painting the shed and watching the kids and he ran out of time to mow the lawn. He'd do it the following weekend, he promised.

Last weekend, Andrew was sick and I was still coughing so neither of us mowed the lawn.

This weekend isn't quite here yet but it's going to be a busy one. Want to know how I know?

It's General Conference weekend—that's a four hour commitment on Saturday (six for Andrew) and four more hours on Sunday; throw in homework and the weekend is pretty much booked—that's how I know. And because I want Andrew to be able to enjoy conference as much as the rest of us, without sacrificing too much of his homework time, I mowed the lawn for him.

After all, when my little brother-in-law had a laundry mishap (he washed a pen with his clothes; bad mistake) and a friend on Facebook quipped, "Good thing you're getting married so you won't have to do laundry ever again!" my mom pointed out that Andrew helps me do laundry all the time so Jacob will likely end up helping Shayla with the laundry, too—because my mother-in-law raises good men. Andrew will start a load (like he did tonight (sometime I think he starts the laundry simply to light a fire under me so that I'll finish it)) or he'll switch it over or help fold. He's even been known to do the whole process from start to finish without me ever lifting a finger.

To keep the record straight, let it be known that I definitely do the bulk of the laundering around here. But I'm also fully capable of mowing the lawn.

So this morning I put on my working shoes, strapped the baby on my front, lured the toddler outside, wrangled the lawnmower out of the shed, and got to work.

We have a push reel lawn mower instead of a gas-powered beast of a machine. Today I think we could've used one of those gas-powered beasts; our lawn hadn't been mowed in three weeks, remember? But I powered through it. The backyard didn't take too long but the front yard was a real challenge. Part of this may have been that I was already tired from mowing the backyard, but I think the grass was longer in the front yard, too.

Now, I'm no dummy when it comes to checking for spider webs. On Tuesday when I went to take the garbage and recycling to the curb (which is technically also Andrew's job but Tuesday is a late night for him so it doesn't really make sense to have him put it out because he'd have to do it either at noon or in the dark) I checked them for spiders first and found one that had moved into the handle of the recycling bin. It was about the size of my thumb—and I have big thumbs (ask anybody). I was just getting ready to brave the spider and wheel the cans to the curb anyway when Andrew came home (a half hour early!)—he swirled up the web with a stick and then coaxed the spider onto it before hurling the stick into the forest behind our house. It was rather clever of the spider to build her web there, between the recycling and garbage bins considering where flies hang out. 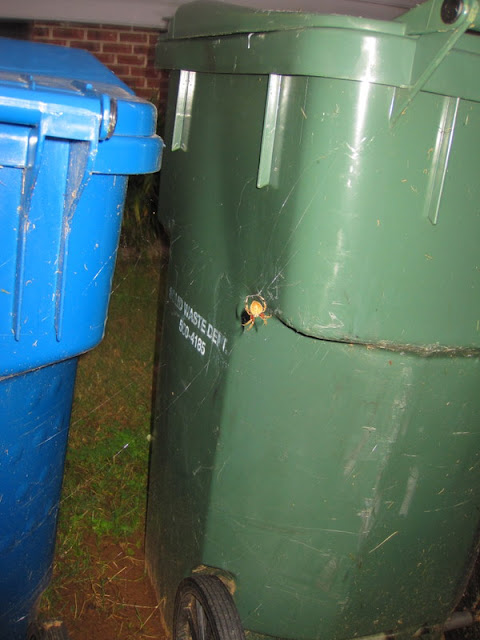 There's also that spider that lives in one of the trees in our front yard. It's fairly courteous and usually takes its web down before sunup, though I certainly check before walking under the trees just in case because I know its not the only spider in our yard.

I was about ready to mow under a tree, so I checked for webs and there were none, so I mowed under the tree and to the edge of our lawn before turning around to come back to the driveway. I made it to the driveway, turned around and started heading back to the other side of the yard. I was halfway across the yard when...I walked right into a spider web! A huge one stretching from our tree to our neighbour's car! I hadn't even seen it!

I screamed and ran a few feet away and started doing a crazy hebejebe dance to get whatever might be on me off, when I noticed the spider climbing up the bouncing threads of its remaining web—back into its tree—which meant the spider wasn't on me. I relaxed a little but continued my almost involuntary twitching for a few minutes before I gathered my wits about me enough to find a stick and swirl up the rest of the web so I could safely mow under that tree.

But I didn't stop there, oh no! I waved that stick around all the trees, cutting up the air from ground level to well above my head. There was no way I was walking into another spider web! Not when I had grasshoppers, crickets, spiders, moths, and even slugs scrambling to escape the blades of the mower in front of me— reminiscent of that scene from Bambi (2:07, here) when all the animals are fleeing the wildfire in droves. I had to watch my feet because I didn't know what I was going to find in the grass. At one point I heard a plop, plop, plop, plop in front of me and froze so that I could see what it was—it was a frog hopping away from me as fast as his little legs would take him!

Our grass had been left wild so long I'm lucky I didn't find a snake down there!

Miriam and I had fun looking at some of the creatures we found—the frog and giant slug were the most fascinating—Benjamin enjoyed his ride in the front wrap, and my friends have assured me that they didn't see me freaking out on the front lawn which, incidentally, looks fantastic, if I do say so myself.