Guess who still wants to be Hermione and is totally stoked about it?

She never wavered. Not once.

And she'd better not change her mind before Halloween because I don't have any other plan for her.

What's interesting is Miriam. For a full year, she and Rachel have been planning a pumpkin costume for Miriam. She'd wear the pumpkin hat I made for Rachel back in 2009 and would borrow an orange shirt that Rachel has and we'd just have to come up with orange pants. Perfect plan...except that it was kind of a lame pumpin look—not nearly round enough. Rachel's continued to fill Miriam's head with this plan, though, and so when fall rolled around Miriam was still determined to be a pumpkin. Kind of. So I started brainstorming cheap and easy ways to turn her into a pumpkin but wasn't coming up with anything.

And then one day we were waiting for Rachel at the bus stop and Miriam was twirling around on the grass—showing off the pirouettes and arabesques she's taught herself from watching episodes of Angelina Ballerina (I kid you not; she's a prodigy). Mid twirl she ran up to me and gave my leg a great big hug while she poured out the yearnings of her soul.

"I wish I was Angelina Ballerina!" she sighed dramatically.

And just like that my pumpkin problem vanished and I was left with a much more manageable mouse problem. This is likely the only scenario you will ever hear those words come out of my mouth in that succession because ordinarily if I had to pick something on the scale of mice to pumpkins, I'd choose pumpkins—if I was Cinderella I'd have a lovely carriage but no footmen.

This Halloween I was simply drawing a blank on a cute pumpkin costume but the minute she said she wanted to be Angelina Ballerina I knew it was a wish I could grant for her.

"Sure!" I told her. "I know Rachel's been telling you all year that you're going to be a pumpkin but you can be whatever you want on Halloween and if you really want to be Angelina Ballerina, you can!"

This set her to jumping up and down, squealing with delight.

In moderation, that's one of the most beautiful sights known to mom-kind.

I set to work right away, and dug around in the box of cast-off yarn I inherited (thanks, Ashley!) until I found enough white and pink to turn Miriam into a mouse.

I finished the tail first, while she was still sleeping one morning, and I showed it to her while I said, "Look, I've finished your tail! I still need to attach the ears to your headband, though..."

And she said, "Oh, I don't care about the ears, Mommy—I already have those. But I didn't have a tail and now I do! If you pin that tail on my bum I will be just like Angelina Ballerina!"

Here I was thinking the tail would be a nice touch on her costume, poking out from under her tutu. As it turns out, the tail is the costume. It gets pinned on pyjamas, pants, dresses, skirts, dress-ups, and underwear. She can hardly live without it.

I've since finished the ears, which Miriam thinks are beautiful...obviously: 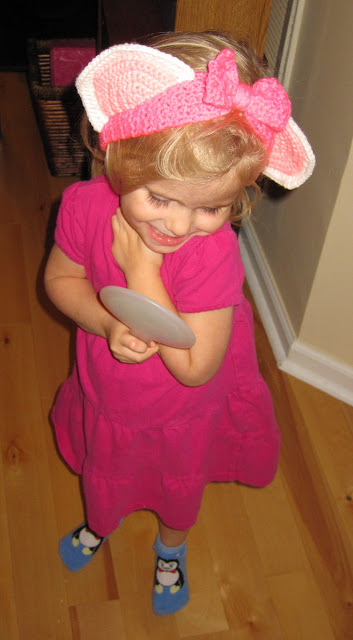 But the tail (which you can't see in the picture...because it's behind her) is the cherry on top of her mouse sundae. She looks even more authentic when she wears her ballet clothes and will look even better with a little mouse nose and whiskers drawn on her face.

We're still not sure what Benjamin's going to be but he was having fun with the mirror the other day, too: 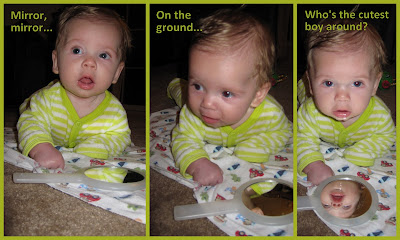 Miriam's always trying to accessorize him. I'll leave him on the floor, playing happily for a few minutes and will come back to find him looking like this: 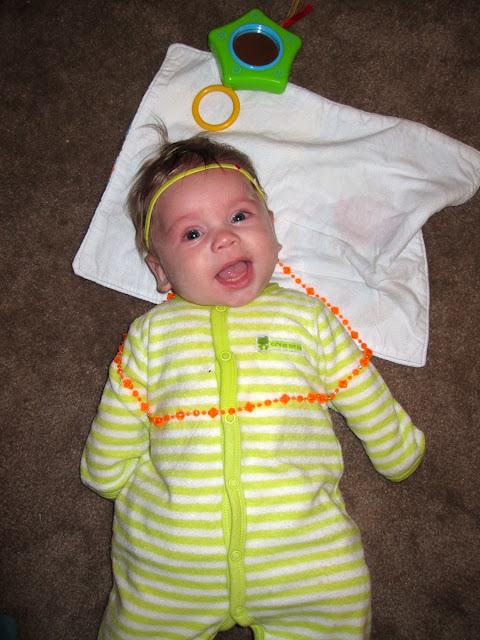 She also put her favourite pink, flowery, be-rhinestoned sandals in his box of shoes because she's "getting too big for them" and so she thought we'd just save them for him. I don't think she's quite figured out he's a boy yet...

By the way, Rachel's already approached me with her costume idea for next Halloween. I told her I wasn't open for discussion until November 1st.
Posted by Nancy at 11:04 PM