For months now, Miriam has been balling up her artwork and calling it "folding." She finds it very offensive if anyone suggests that she is "crinkling it up" or "ruining it." It's just folding—she likes folding things. Her words, I believe, were, "It's just yat I like folding fings!" (Yat and fings being that and things, respectively.)

Not only does she like things folded, she likes them to stay folded, which is a bit trickier now that she actually understands how to fold things (rather than just balling them up). She is constantly asking to use tape, glue, or staplers to aid her in keeping her pictures sealed from view. She's been known to flaunt the rules of artistic mediums (by drawing all over the table, for example, or using glue sticks as lip balm) so we've slapped some regulations on her, which is why she has to ask for permission, especially when she wants the stapler.

This one time we showed her the magic of a lick-and-seal envelope. She now thinks that applies to all paper and licks and sticks paper everywhere. I can't tell you how many times a day she comes up to me with a paper folded over so many times it can't be folded anymore, nearly dripping with spit, and announces, "This is for you, Mommy. Open it!" 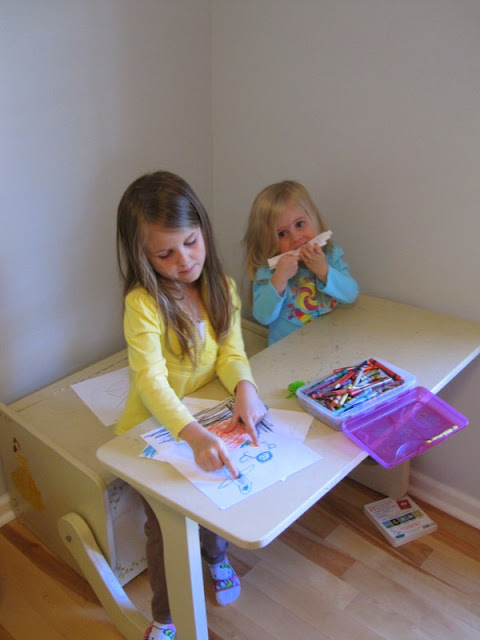 Her other creative method of sealing her drawings (and my personal favourite since their delivery is often much less soggy) is to clip it closed with hair barrettes. This is the collection of drawings I have on my desk right now: 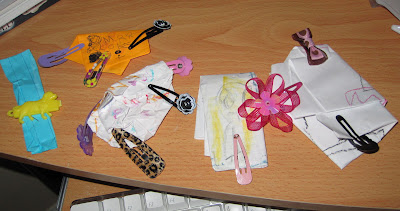 Some of them were sealed with spit prior to being clamped with barrettes because they're just that important—they're too crunchy to open now but if I'd have opened them earlier they would've ripped apart so there they sit, perfectly mysterious.
Posted by Nancy at 10:31 PM