We have had drawings coming out of our ears around here! I just cleared off every bit of uncommissioned artwork from my desk. Some I took pictures of and then put in a binder, some I took pictures of before ditching, others wound up unceremoniously shoved to the bottom of the recycling bin.

Here's a picture of our family that Rachel drew at school. She ran out of time before she could draw Benjamin, at least that's what she told me. It doesn't really look like she left room on the paper for him:


I read an article in a magazine at the doctor's office about decoding your child's artwork—what it means when they draw one person a lot bigger or smaller than another or why they group people the way they do or why they leave family members out of the picture. The best advice in the whole article was to not read too much into the artwork, in my opinion because not everything has hidden meaning. (This is a point I argued with my English teacher in grade eleven when I she said I gave an insufficient answer to the following question: In the Great Gatsby, why does Daisy wear an ivory coloured dress? Something like that. I had no idea why. Apparently it was symbolic of her fallen, sinful state (otherwise Fitzgerald would have put her in a white dress, duh)). I simply don't think everything is necessarily representative of something else. I know this because sometimes I wear ivory and it isn't because I'm off having an affair—it's because I wore ivory, end of story. You can ask why about anything but you won't always get an answer. My children are learning that; I'm still learning that.

The best bit of advice in the whole article was this: "Be cautious about overinterpreting. It's not a good idea to read too much into your child's sketches. Instead, use them as an opportunity to talk with your child about what he or she has drawn."

So, Benjamin's not there because she didn't draw him, end of story. Though I do find myself wondering why I'm the biggest person in the picture. Am I that overpowering? (I'm kidding, of course...)

Here's a picture of Rachel surfing with a dolphin. Analyze that! 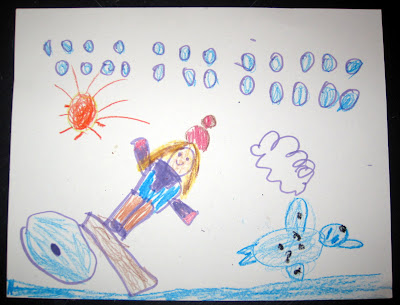 They've been asked to write a sentence describing all of their pictures at school. I love reading Rachel's sentences and watching her language skills develop—in fact, they're also required to keep a journal, which is an assignment I absolutely love (I still have my journal from grade one).


This next one is one of my favourites. Rachel drew a picture of our sick days at home—she's sick on the top bunk, Miriam is sick on the bottom bunk. On the side of their bed are the letters BAB NRU. 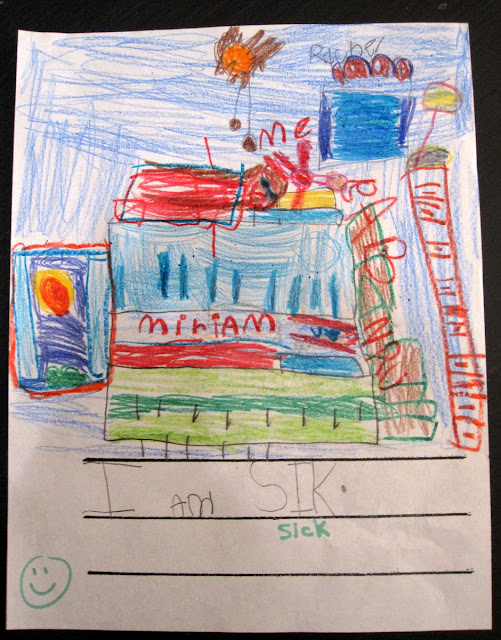 "What does this say?" I asked her.

She sighed. "I tried to spell Baby Norah, but I guess I did it wrong."

"That was actually some great sounding out you did! It's not conventional but I can see now that it says BA-B(y) N(o)-RU(h)!"

This one made me giggle, too: 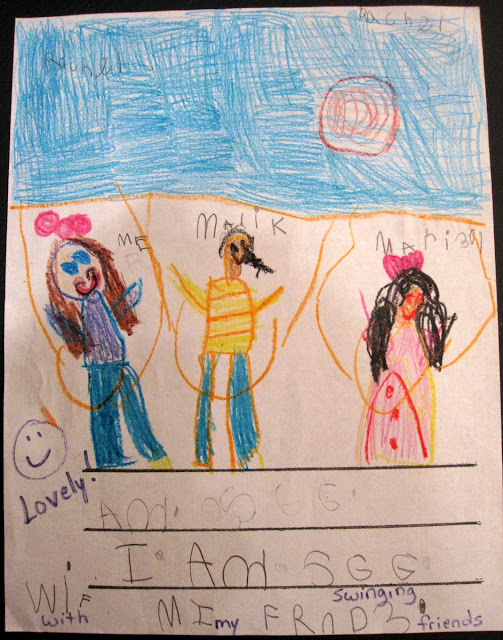 I am swinging wif my friends. How great is that?

It's like how in our journals from our younger years I wrote that I "cwid" and Andrew wrote that he "crahd and crahd," when we were writing about our reaction to an apparently tearful situation. I couldn't pronounce my R's very well and Andrew had a bit of that North Carolina drawl going on. Rachel can't say /th/. 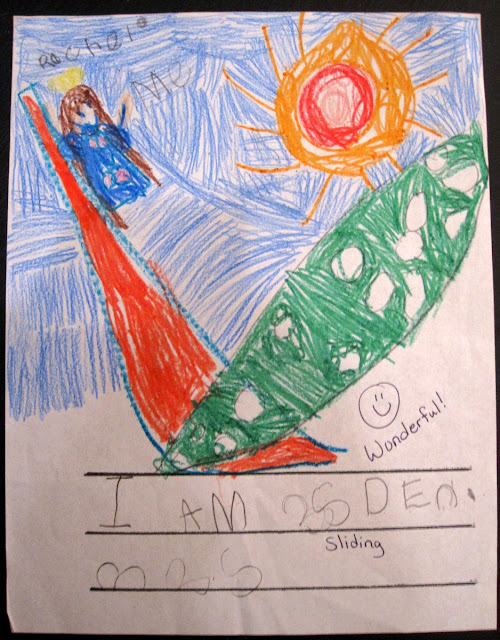 And here's a picture about one of our culinary masterpieces: 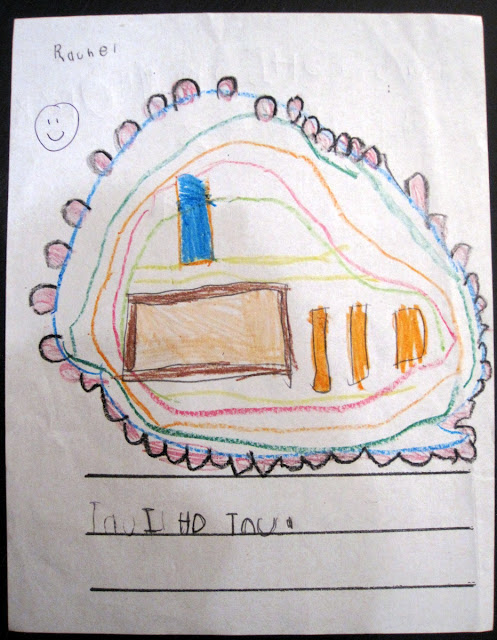 She made tuna fish sandwiches one Monday night while I cut up some carrot sticks. She was so proud that she made the sandwiches all by herself (I helped open the can of tuna but she did everything else) and was in such awe over the carrot sticks (as opposed to baby carrots). Apparently it made enough of an impression on her that she drew/wrote about it in school the next day.

I love how she thinks u says uh. Nru. Tnu. Norah. Tuna.

Something that has obviously made an impression on her is her daily bus ride. She has almost as much to say about the bus as she does about school and has drawn many, many pictures of her riding a bus. She sits by this girl named Hailey and they make up stories together and think up solutions to problems. Rachel's always telling us, "Oh, I'll just ask Hailey about the (xyz) problem. Hailey has lots of ideas." Once she took a sheet of paper and wrote out Hailey's name thirty times so that she could remember how to spell it (Hailey had given her a drawing on the bus and had signed her name on it, which is how we know how to spell it correctly). 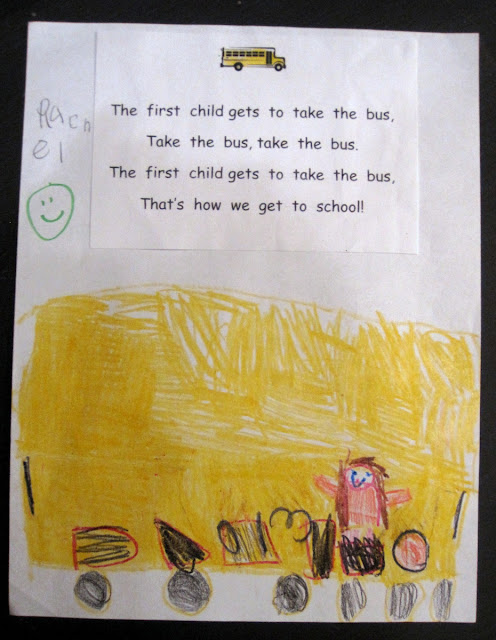 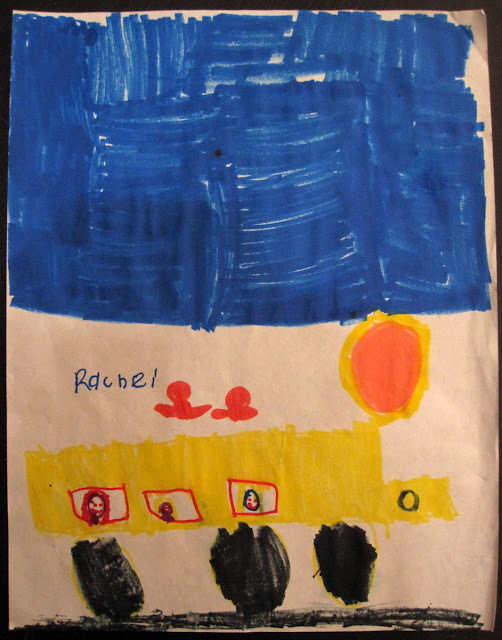 She did the same thing with Miriam, so now she can spell Miriam's name at the drop of a hat. Last night she started practicing spelling Heiss.

She can write the whole alphabet in order: 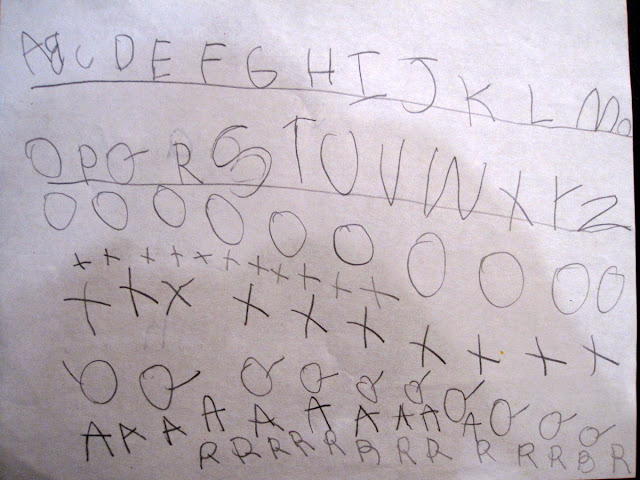 She came home from school a few weeks ago, very near the beginning of the school year, and said, "Mom. You sing the alphabet wrong. It's L-M-N-O-P, not lellamellapee."

I sang it for her.

"Oh. You do. I always thought it was lellamellapee."

At the end her class sings, "Now I know my alphabet and I never will forget." That is different from how I've ever sung it. I'm still trying to convince Rachel that my way isn't wrong it's just a variation. Come on—"Now I know my ABCs, next time won't you sing with me?' that's a way, right?

Her numbers crack me up, specifically the sixes and nines: 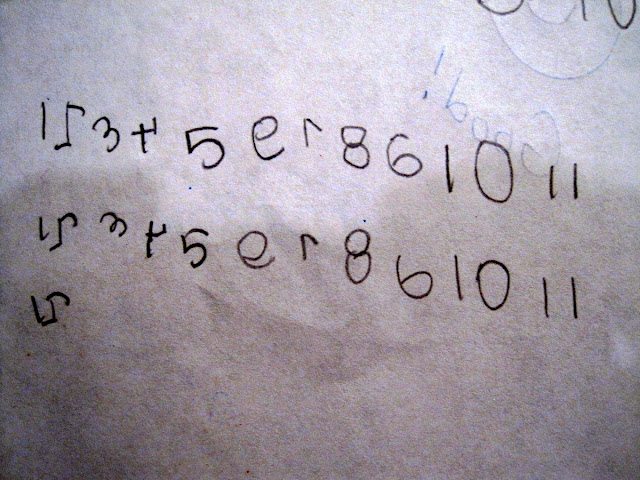 She's come a long way the past couple of weeks but still struggles with 4, 7, and 3. And 9. And other numbers: 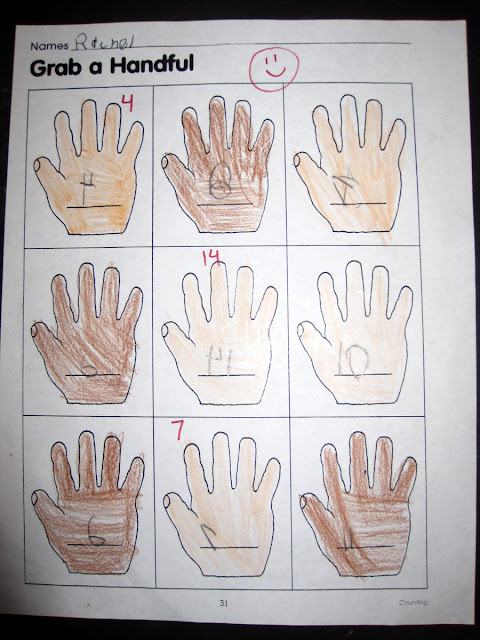 We've been doing a lot of drawing at home, too. In fact, we're running out of scrap paper again. We'll have to find a new source. I guess some of the pictures above were from home (the dolphin picture, and the "I am Rachel Heiss" picture) but I have more. So, so many more. More than you'll ever know.

Rachel's getting excited about Halloween, of course: 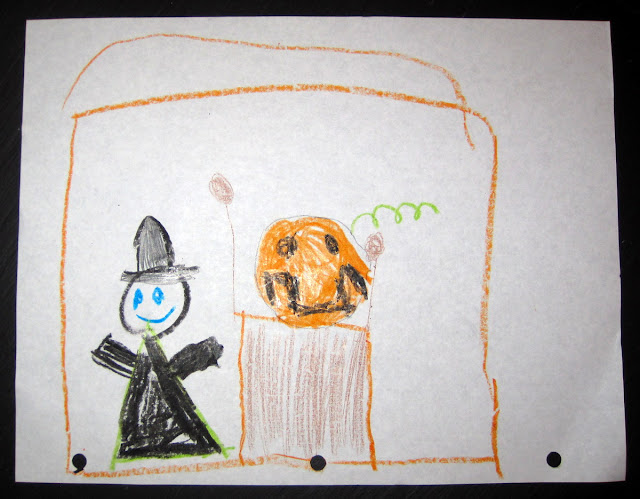 She drew a picture of Angelina Ballerina with her friend Grace: 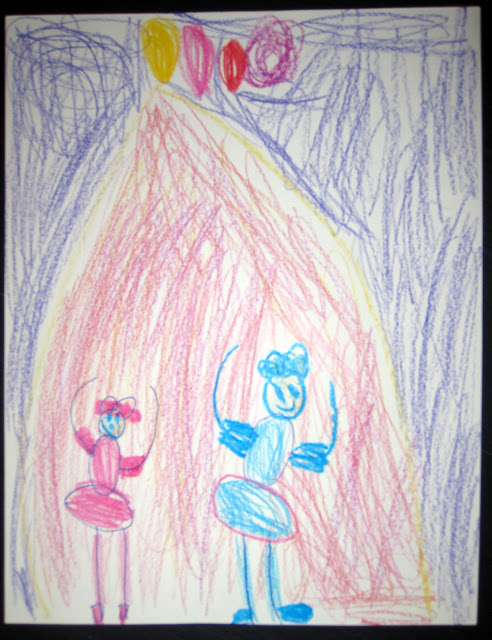 Grace is in blue. Rachel is thinking about being Grace for next Halloween because she wants me to make her a pair of mouse ears on a blue headband to match the pink ones I made for Rachel. I told her to not talk to me about next Halloween until this Halloween is over. Miriam wanted to draw Angelina, too, but kept getting frustrated, so Rachel made a little dot-to-dot for her to trace.


This is a picture of Snow White that Rachel drew for Miriam: 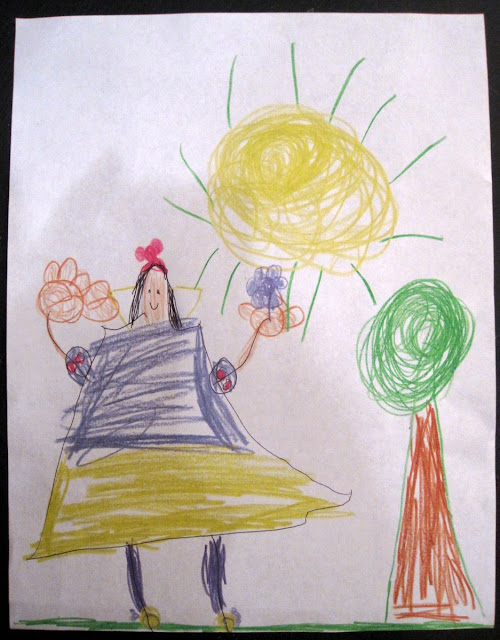 And this is a picture of a princess (Rapunzel, I think) with a prince. They are holding hands. And there are hearts between them, with arrows in them to point to the person they love: 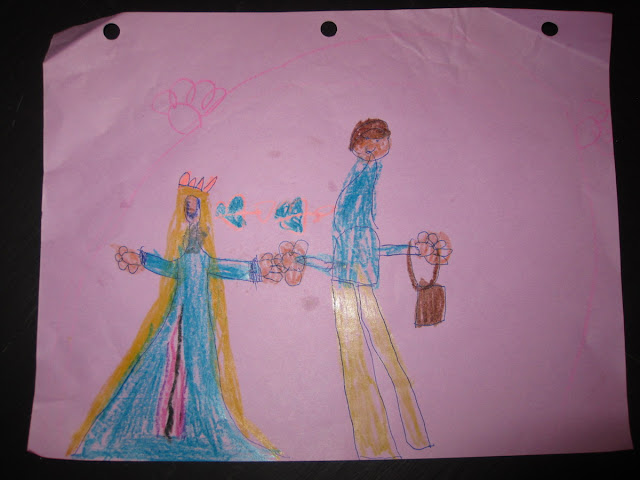 That ends our Rachel segment and brings us to our Miriam segment. Finding her pictures takes a bit of sleuthing (because they're usually so folded/stapled/taped/barretted and sucked on that they hardly even resemble paper) so I only have a few.

This is a picture of outer space:

And here are a few princesses: 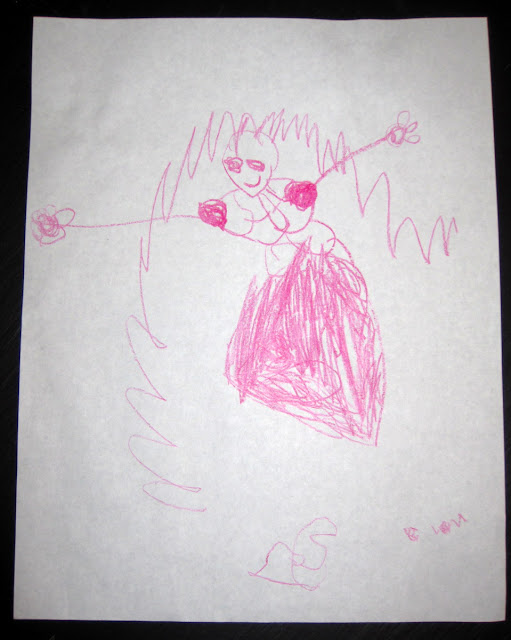 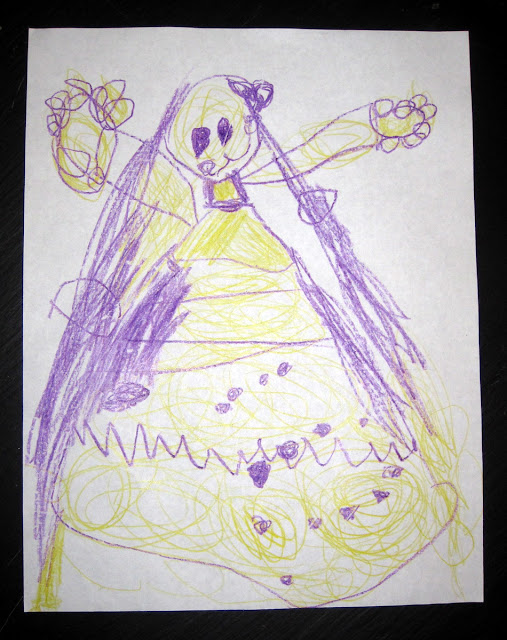 You might notice the first two princesses have very elaborate hands. Rachel taught her how to draw hands with fingers. Miriam calls them "flower hands." 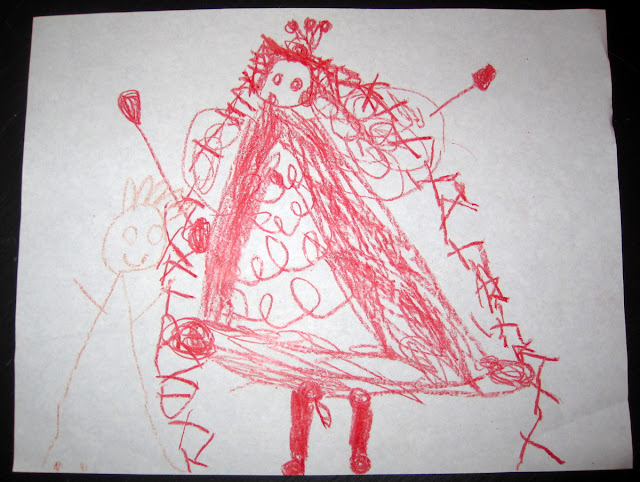 This last princess is a little wild. I'm not sure what's going on with her hair but it's kind of awesome. I know for sure that Miriam drew the big person on the right because that's her style of crown but I suspect Rachel drew the person on the left because that's her style of crown. I have a hunch this paper was cast aside in a fit of rage, rather than being lovingly folded and chewed on, because Rachel drew on her paper. It really bothers Miriam when Rachel does this. Rachel does this a lot.

After looking at these beautiful princess pictures, would you believe me if I told you that Miriam is self-conscious about her drawings because she can't draw necks? She's constantly demanding that I draw princesses for her to colour—princesses with necks. Stick figure drawings (the regular old circle on top of a triangle (such as Rachel's drawing on the left up there)) will not do. I wish I could convince her that she draws amazing princesses. Because...she does!

Lastly, here is Miriam's drawing of the pig pickin' we went to back in September: 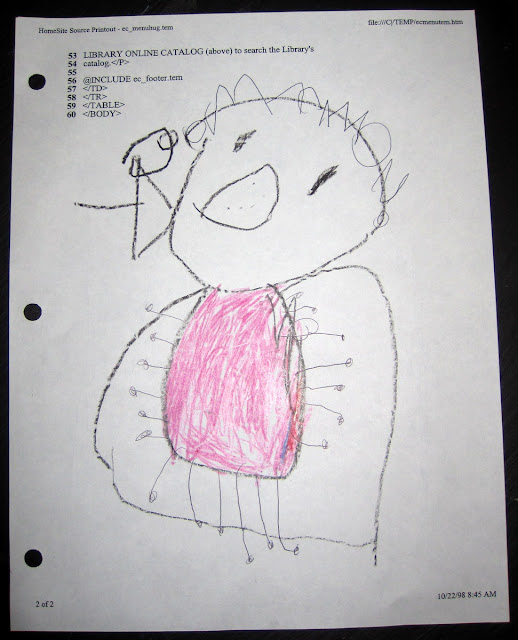 She didn't know how many legs pigs have so she just drew a bunch of them. And that's her pickin' some pork off of that pig!

Fortunately, our pig pickin' was not a traditional pickin' and our hosts pre-picked the pig for us...
Posted by Nancy at 9:43 PM