About a month ago we went to the Little River Regional Park for the annual ward Pig Pickin'. We'd never heard of a Pig Pickin' before but from looking at the potluck signup sheet it was obviously a southern tradition: deviled eggs, baked beans, cole slaw, dessert. We were fortunate that ours wasn't a very traditional pig pickin'—our pig was pre-barbequed and pre-picked by some men in the ward with strong stomachs. Traditionally the pig is roasted whole and guests take what they want from the pig but they thought some of the outsiders (and especially the piglet-loving youngsters) wouldn't enjoy that as much as if we just had "pork."

It was a lot of fun—we came prepared for a raggedy trail over roots and mud puddles since we'd just hiked at the Eno but the park at Little River has a nice paved trail—a little loop—around a section of the woods (it also has cruder trails but we didn't take those).

Here we are a month ago (September 14) walking the trail. We didn't know anybody and our kids were too shy to go play with any of the other kids: 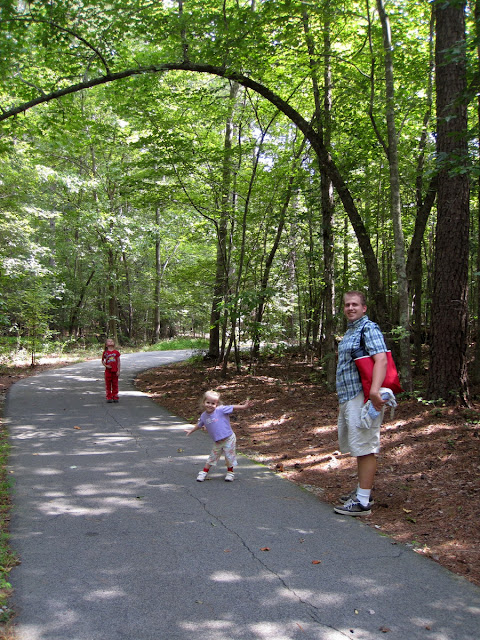 We had a good time, though, enjoying the last bit of summer. 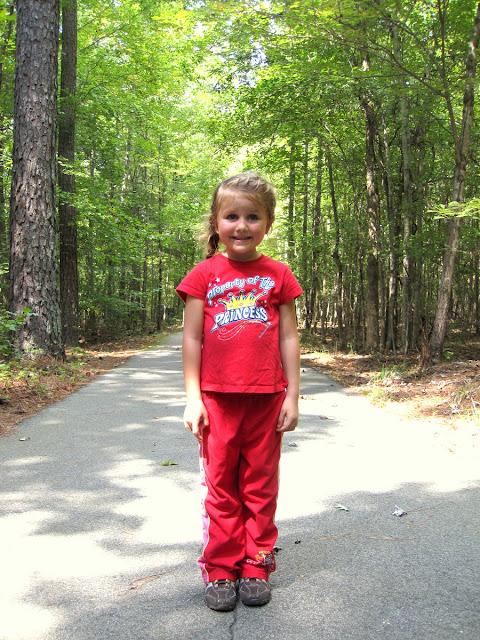 The girls were already on the lookout for autumn, and they found a bit of it, too! 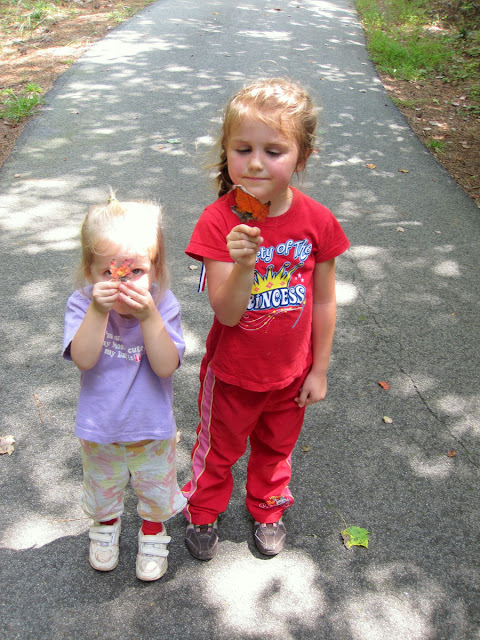 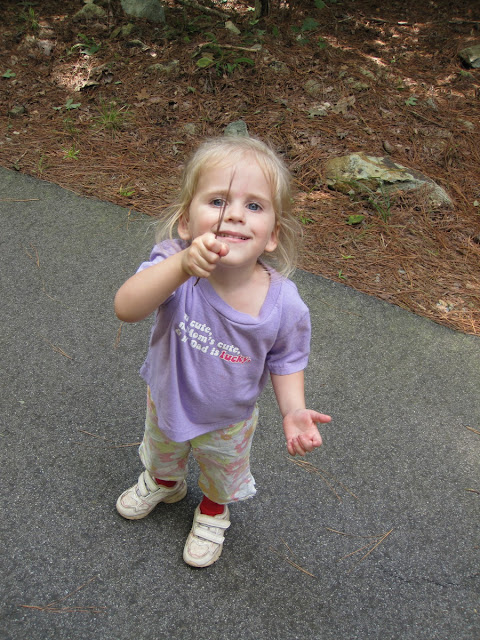 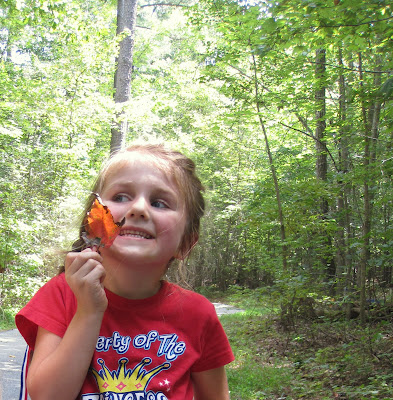 This Saturday we went back to Little River Regional Park for the Elder's Quorum cookout. This time our kids ran off to play with the other children. They know them now. They were all off romping around in the woods, building forts, constructing seesaws, and frolicking in the leaves. They weren't concerned about spiders or snakes or poison ivy at all. Fortunately none of them stumbled into any ivy—there was likely some around somewhere! 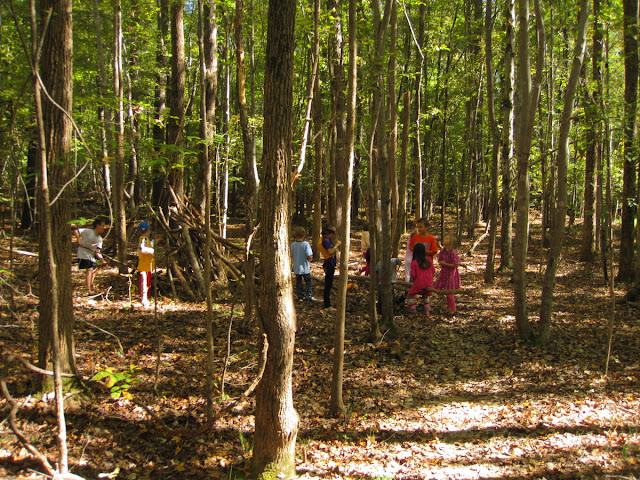 Here's Rachel running from one fort to the other: 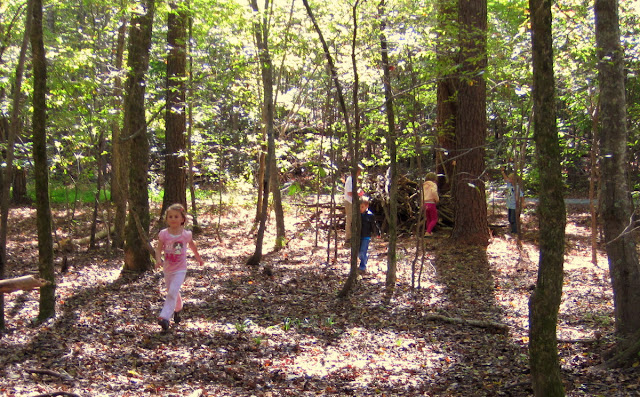 There's a relatively small loop around this section of the woods—the kids were playing in the loop while the adults talked over by the pavilion. I was impressed that the parents were just sitting back while their kids were playing in the woods, out of sight. I felt like a bit of a helicopter-mom when I went to check on them...but Rachel was the only one out there without a sibling and I wanted to make sure no one was going to forget she was there. She was having a great time and fitting right in! 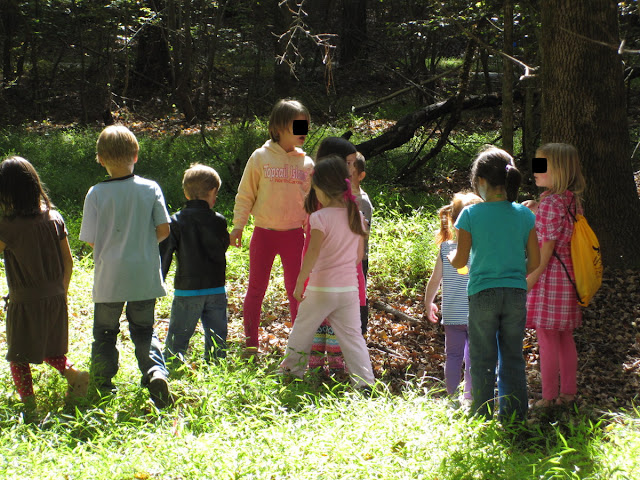 Soon, though, other parents came to reclaim their children. It was getting late and most of the dads wanted to get home to watch the BYU football game! 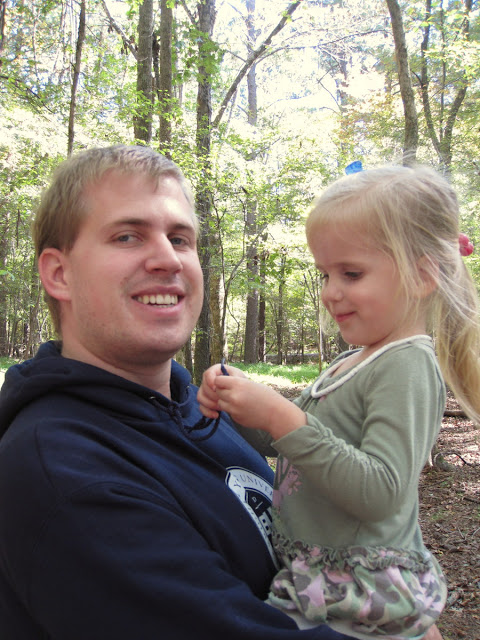 We were invited to watch it at some friends' house, but only if we liked football. "You're welcome to come over," he said, "But we're really going to be watching the game so if you're not that into football then you probably shouldn't come." I thought that was candid of him. We weren't offended by the condition of his invitation and he wasn't offended when we declined. Andrew wanted to watch the game passively while doing homework. I can't actively watch football because...I just can't.

So we walked around the loop and then...almost headed home.

The woods were beautiful. Autumn is such a drawn-out season here so although the leaves are dropping, the trees are still green. Our friends said that we'll probably be raking leaves for months before the trees are finally bare. 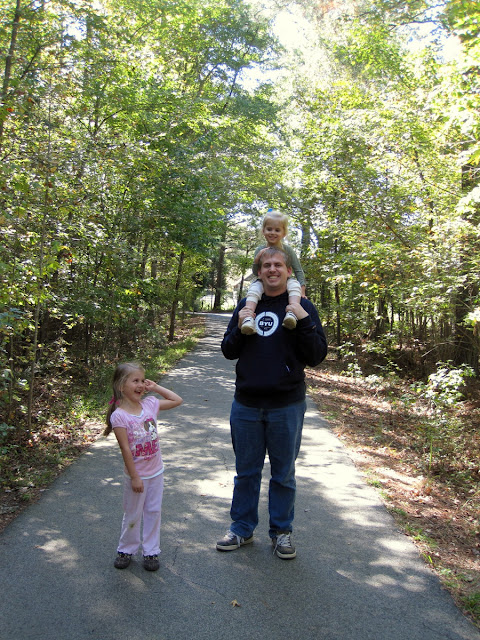 So, yes, the woods were beautiful, but this was one of my favourite views: 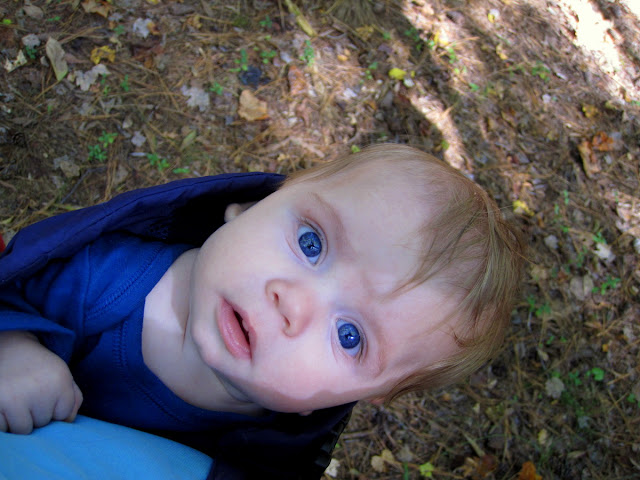 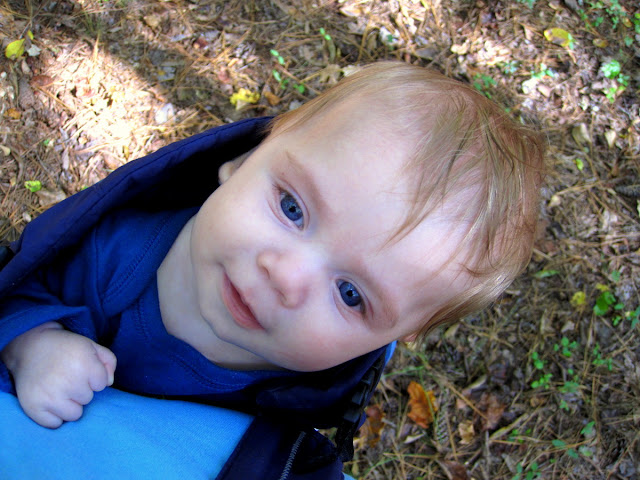 Rachel evidently had a great time: she had gnarly grass stains all over her knees and butt by the time we left. 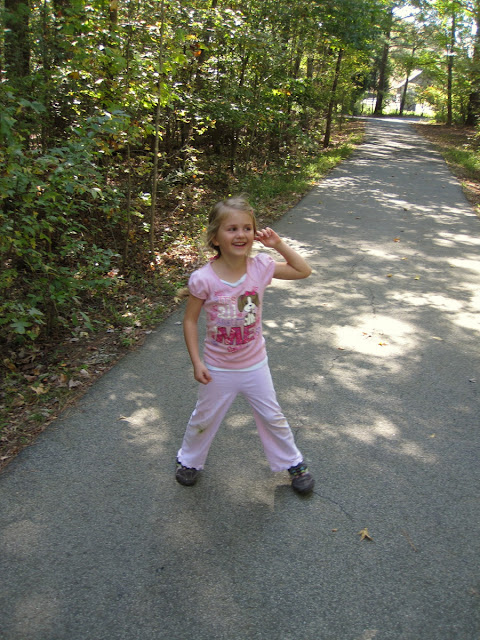 Running around in the forest is difficult. Rachel had a hard time, but Miriam had an even harder time. She kept tripping and sprawling all over the place when we were walking through the woods to find Rachel and her friends. We're very lucky she didn't go flying into a patch of poison ivy or it would have been all over her! 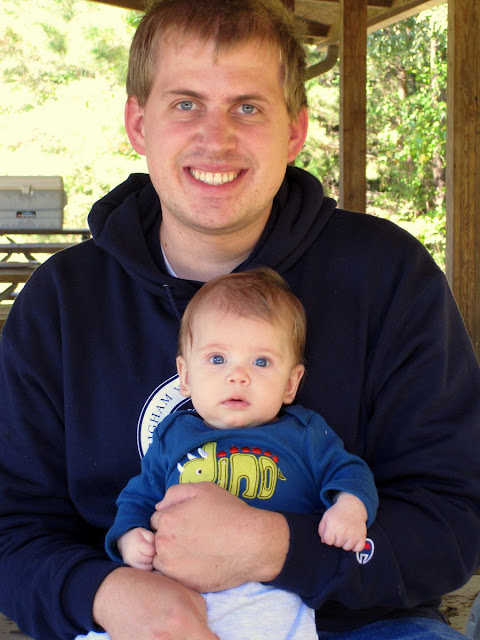 When we were finished with our little walk on the trail, Rachel got caught up on the playground with some of her friends. We told her she could play while we gathered our things. I put the diaper bag together while Andrew entertained Benjamin and Miriam (who were both ready for a nap).

Benjamin's a bit blurry in this one, and Andrew's hand is blurry because he'd been tickling Miriam, but I like it anyway: 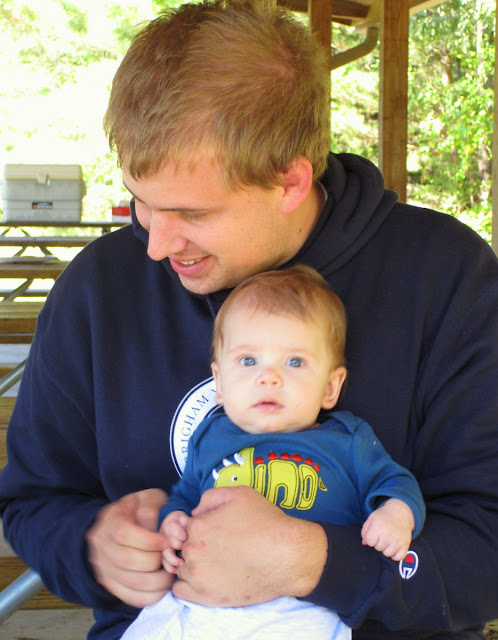 And I love how nervous Benjamin looks here. He doesn't like having too much action around him. 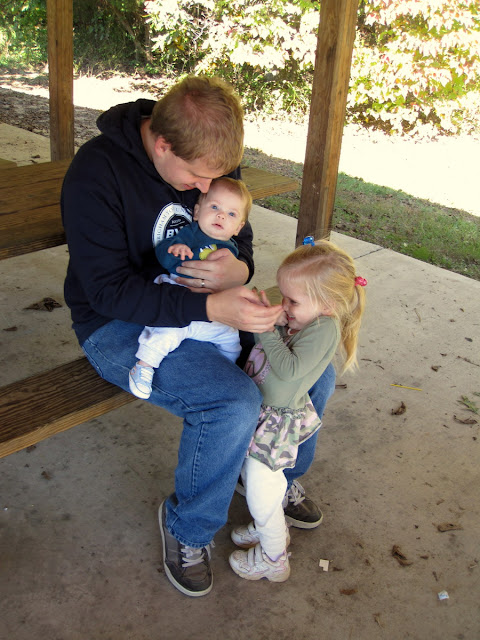 Andrew's on fall break right now so we actually got to have Family Home Evening on Monday (since our entire family was home; it usually gets put off until Thursday since that's typically the first night of the week Daddy's actually home). We sang Jesus Wants Me for a Sunbeam for one of our songs, which inevitably involves a lot of jumping. Even I got in on the jumping.

Benjamin was lying on the floor under his little gym and all our jumping made him nervous. At first he looked curious but as we kept jumping around him he got increasingly worried. He furrowed his eyebrows, then he pouted his lower lip. I picked him up when his lips began quivering and told him he was perfectly safe. He shot me a look that said he did not believe me in the slightest.