West Point on the Eno

Sometimes having no choice is easier than having to make a choice—and not only because I'm indecisive. Initially making choices is difficult, of course, but no one tells you about retrospect. You know: buyer's remorse (or what I think should be called "the pillar of salt principle"). We've been relatively immune to this principle for much of our married lives.

When we went to Egypt we had no plan B. It was stay and do nothing or go and do something.

Two years later when we came back to BYU it was only because all our other plans had fallen through. BYU was our backup plan. There was no where else to go.

This time, though, it was different; this time we chose between two very attractive choices.

Now and again, I catch myself glancing back at that moment in time when we were making this choice, wondering if we made the right choice—the best choice. I wonder how our lives would be different. I wonder if Andrew would be less busy, more busy, or as busy as he is now. I wonder if Rachel's schools would be better. I wonder a lot of things, but usually I just tell myself to stop it...because we've made our decision and it was a good decision and there's no way of knowing if was the best decision, but it was ours. We don't need to live in the "what if" moment; we need to live in the now...or we'll turn into a pillar of salt.

At the beginning of the school year I posted the school calendar on the door of the freezer. I'd highlighted all the irregular (read: holiday!) days so that I wouldn't do anything stupid like forget to pick Rachel up at the bus stop two hours early on an early release day or stand out in the freezing rain waiting for the bus with her in the wee hours of a morning that we didn't have to get up. Today was an early release day so we'd planned to go back to the Museum of Life and Science because Wednesdays are free!

We'd go a lot more often than only on early release days except that the museum closes at 5:00 and Rachel doesn't ordinarily get home from school until after 4:00.

Where was that bus!?

At 2:30 (twenty minutes after the bus should have arrived) I texted Andrew to ask where the bus was. He didn't know...obviously...so ten minutes later I phoned the school to ask where in the world my daughter was.

"Really? Well, I thought it was an early release day."

"I have the school calendar right here and it says that October 17th (that's today) is an early release day."

"Where'd you get your calendar?"

"At the open house at the beginning of the year."

"Oh! That's an old calendar. I was wondering why I've been getting so many phone calls like this today! There's a revised version online."

"Okay, well, it would have been nice to know that before right now."

And it really would have been. By this time, Miriam had buckled herself into her car seat and was waiting patiently in the van—she was so excited to go to the museum! She was so disappointed when we told her we weren't going that Andrew decided he'd taker her on a daddy-daughter date for a couple of hours and then they'd come home to pick me, Rachel, and Benjamin and we'd go to the Eno.

So I put Benjamin down for a nap (his second nap—in his bed!—today) and worked on my mom's dissertation for a while before I made a picnic dinner. That's the thing about having kids come home from school after four o'clock: any outing has to include a picnic dinner.

Rachel was a little disappointed when we told her we weren't going to be able to make it to the museum (okay...she was a lot disappointed) but we revisited our "plans change" lecture and then recited our "it's best to be flexible" lecture and then rounded out our lecturing with our "you can choose to be happy about this situation" lecture. They're good lectures; you should hear them sometime.

She changed her attitude (when I gave her a snack) and we headed off to West Point on the Eno...where we got our socks knocked off. We had no idea what to expect but we had so much fun!

There are various trails there, as well as a few historic buildings (a mill, a house, things like that). Everything was closed (the sites are only open on the weekends between 1 and 5) but we had fun looking at them and enjoying the fall leaves.

We had to find the river first—Rachel's request—so we passed over the bridge that runs by the mill and made our way to the river.

We were comforted to learn that there are no venomous water snakes in the Eno River, though I'm still a little worried about the land snakes... 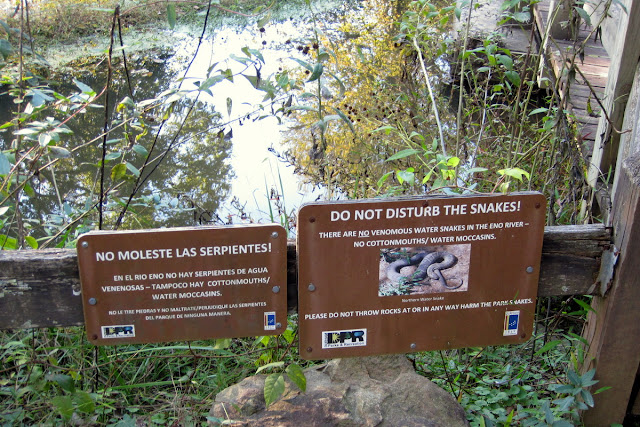 The West Point Mill is rather intriguing—it was a functioning mill from 1778 until 1942! This is actually a replica since the original fell into disrepair and eventually was washed apart when a dam broke in 1978, but it's obviously been refurbished and is actually used today to grind wheat and corn that you can buy in the mill. We'll definitely be heading back on a Saturday so we can see a mill in action! Maybe even this Saturday since Rachel's been doing The Little Red Hen at school.

We did eventually make it away from the mill and down to the river! It was beautiful! The leaves are donning their autumnal hues but it's still surprisingly warm.

Upstream there are good places to go canoeing or kayaking—they even have canoes and kayaks to rent right there. Perhaps one day Andrew and I will get brave and go on a paddling date... 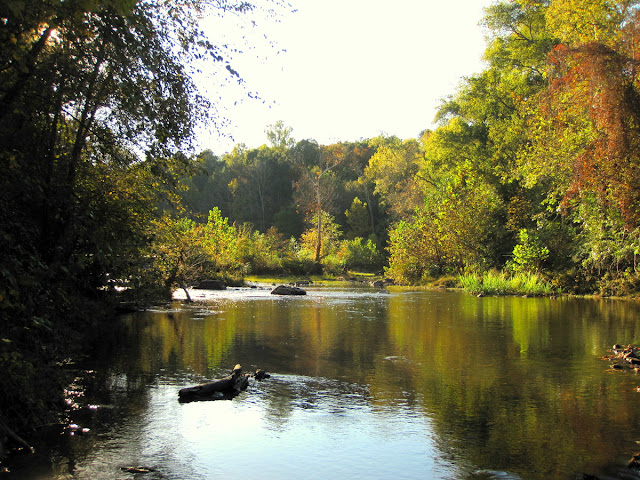 Until then we have this beautiful picture of the two of us (plus Benjamin) that Rachel snapped: 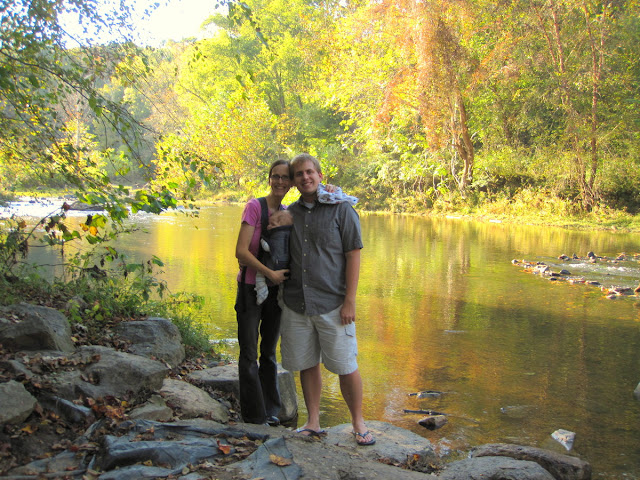 We probably could have stared at the river all evening...if only our tummies weren't grumbling! 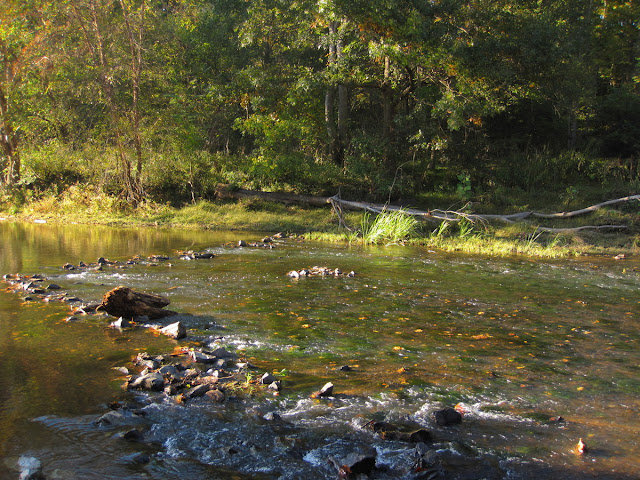 Reluctantly we found a picnic table and sat down for dinner. The girls were so excited to see what I'd packed and when Andrew said, "Okay, who wants to pray...outside?!" you should have seen Miriam's hand shoot into the air. 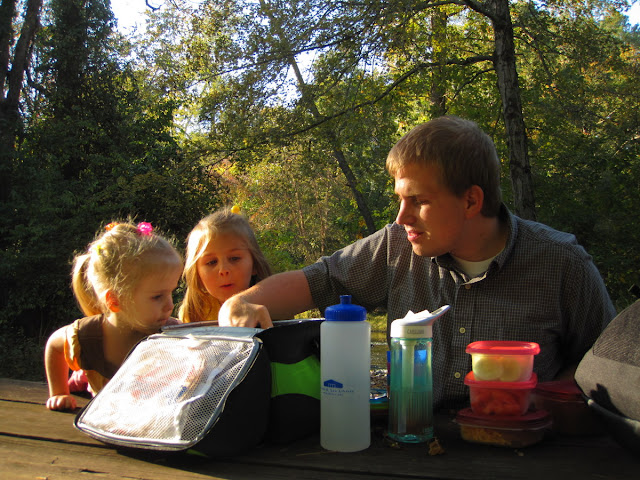 Unfortunately, Miriam had a mishap during dinner—she fell off the bench and slammed her chin onto the table—and never fully recovered from that, attitude-wise. She was a tad grumpy for the rest of the outing.

We did a bit of playing in the leaves before we left our picnic area to explore some other parts of the park. Rachel was all about posing for pictures—Miriam was all about hiding from the camera. 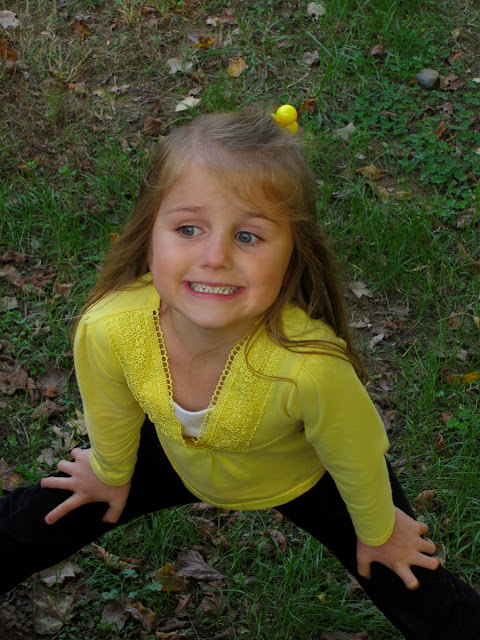 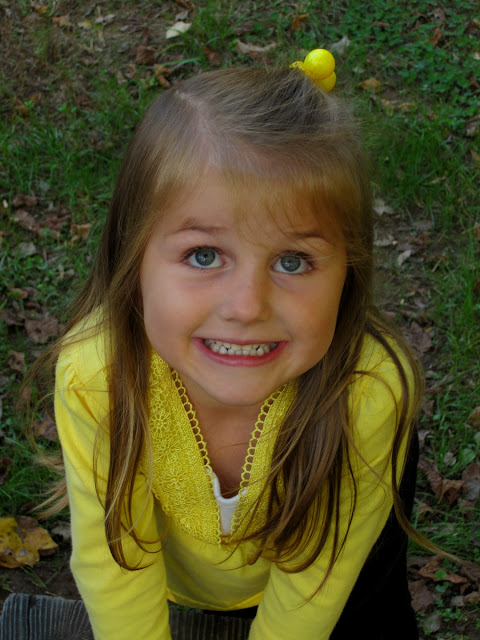 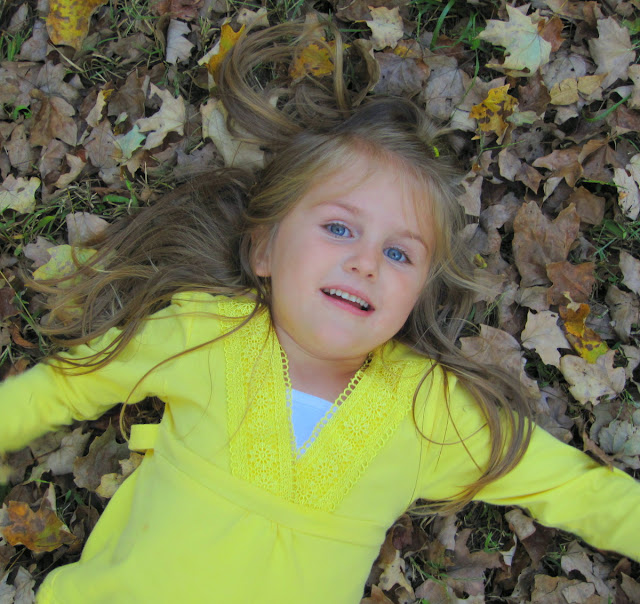 Miriam did, however, join in a leaf throwing fight and managed to stay happy through (most of) that. 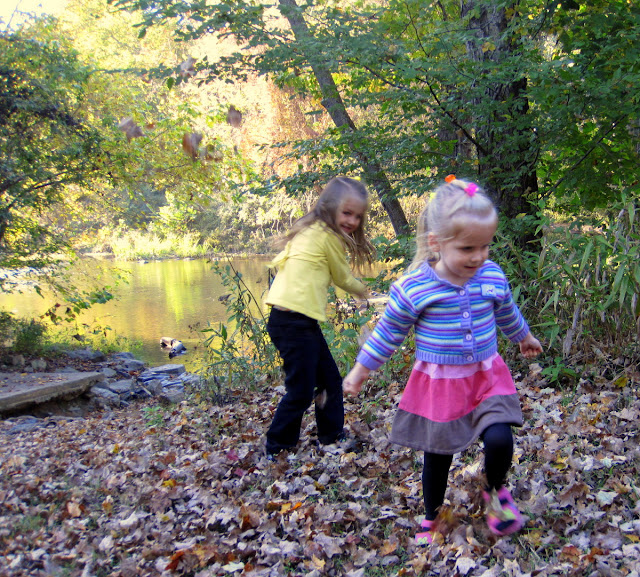 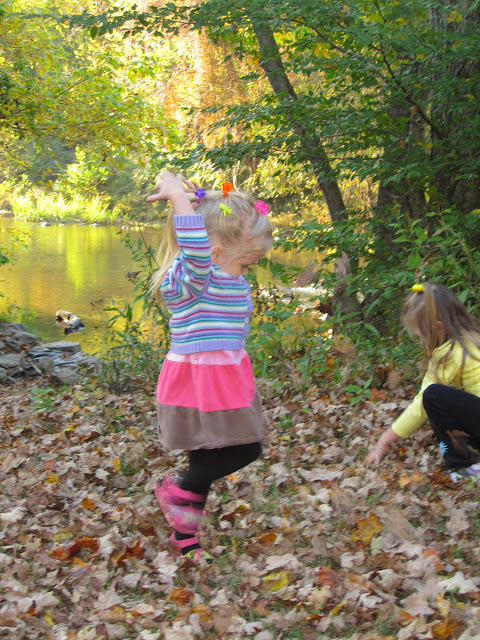 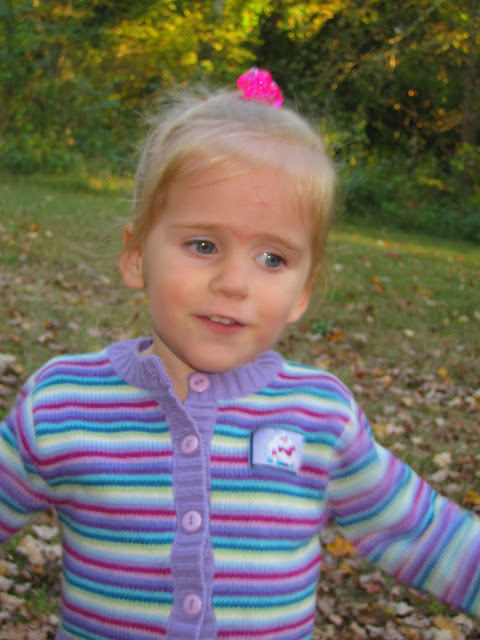 Benjamin fell asleep in the front carrier but I wanted a picture to commemorate his first fall. At first I just let down part of the carrier and tried to snap a picture of his cute face but that was cumbersome. Andrew suggested that I just lay him in the leaves.

So I put him down in the leaves...and he stayed asleep...but only for a minute. 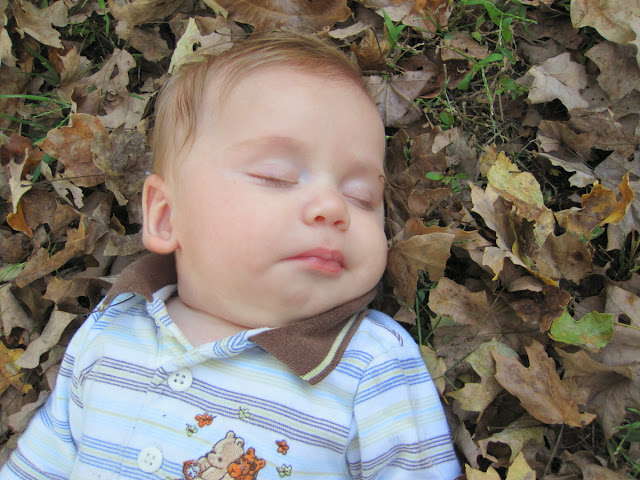 Then he wiggled and was like, "Hey, guys! My bed is crunchy!" 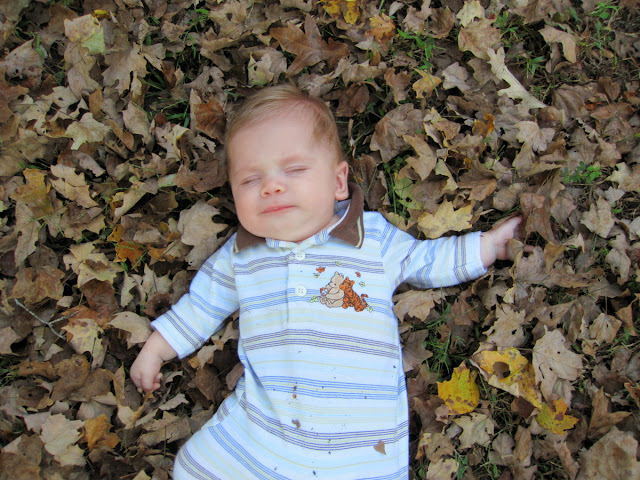 I thought he'd freak out about the situation but he didn't. 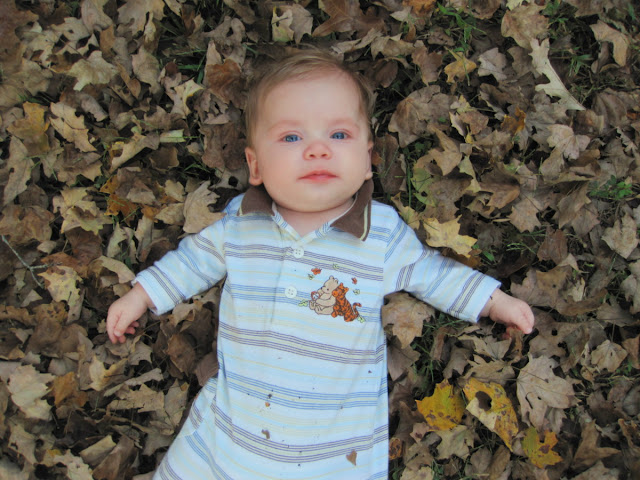 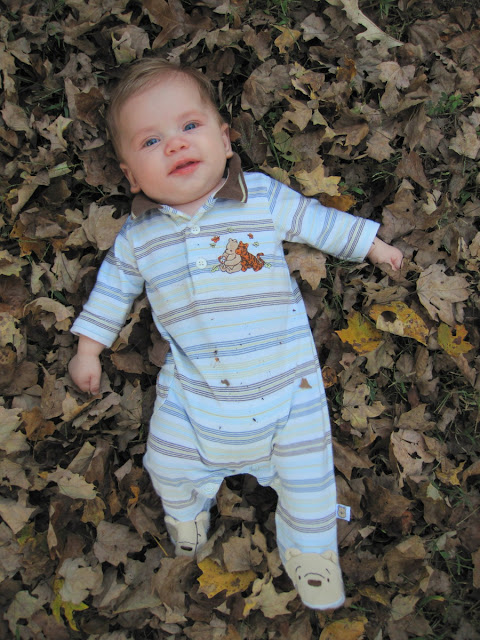 He almost seemed to be enjoying himself, which I suppose is possible since babies tend to like crunching noises (I guess, since crunchy/crinkly-sounding fabric is often a "feature" of baby toys—this toy was 100% organic)! 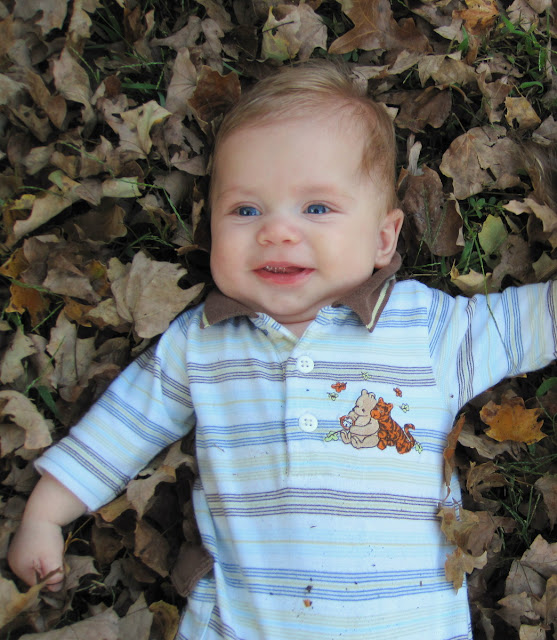 He was joined in the leaves by Rachel, who adores him. I can't really tell how he feels about his sisters. Sometimes he seems to get a real kick out of them. Other times...not so much. 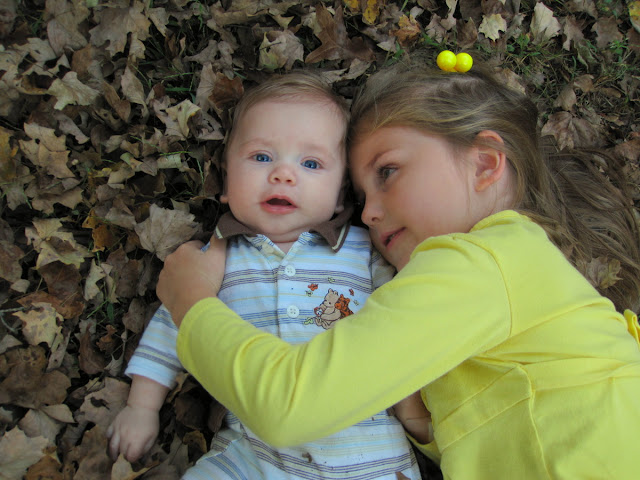 Miriam was whining, almost chanting, "Can we go home now?" so we decided to pack up and head off. Here she is crossing the bridge with Andrew: 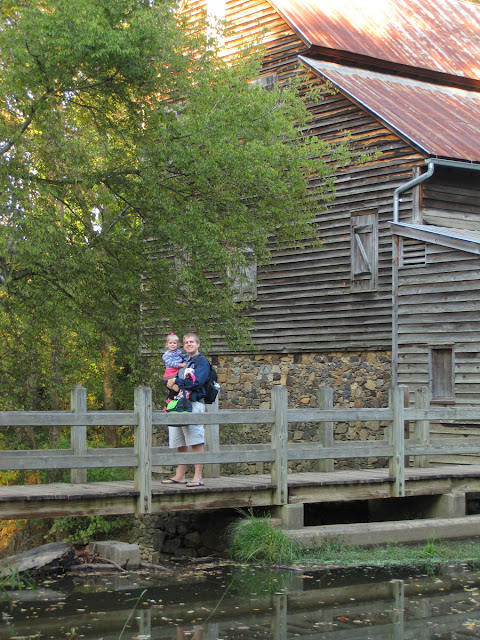 And here she is, rather annoyed to be stopping to pick up a park map: 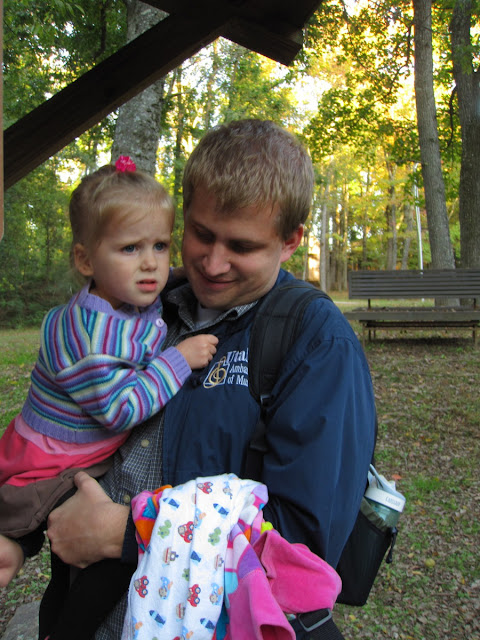 We decided to stop for a quick peep at the Mangum house. Rachel and I walked there through a little path in the woods. Andrew and Miriam drove the van up to a closer parking lot because we didn't think that Miriam (who was still chanting, "Can we go home now?") could handle walking past the van without getting inside it.

Here are some pictures of the walk I had with Rachel (and Benjamin): 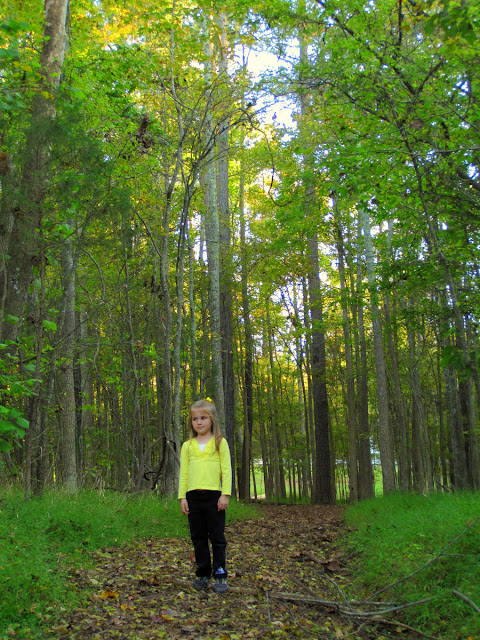 Rachel found this odd fruit on the ground. I have no idea what it is...others were broken open and rotting and their flesh was all black. We didn't eat it. Rachel tried to crack it open by throwing it against a tree but it just bounced off... 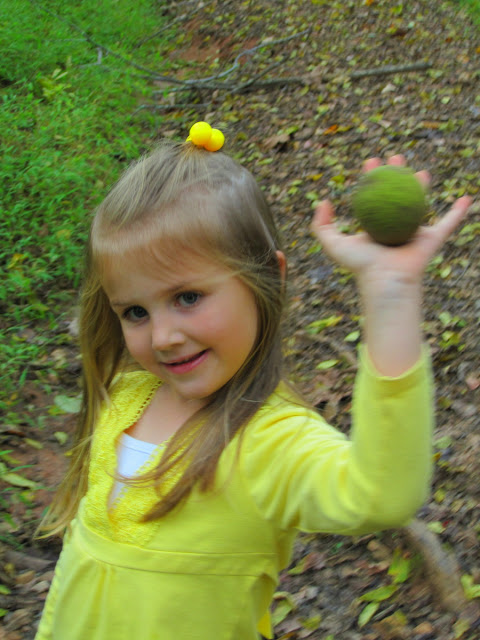 Rachel took the next two pictures: 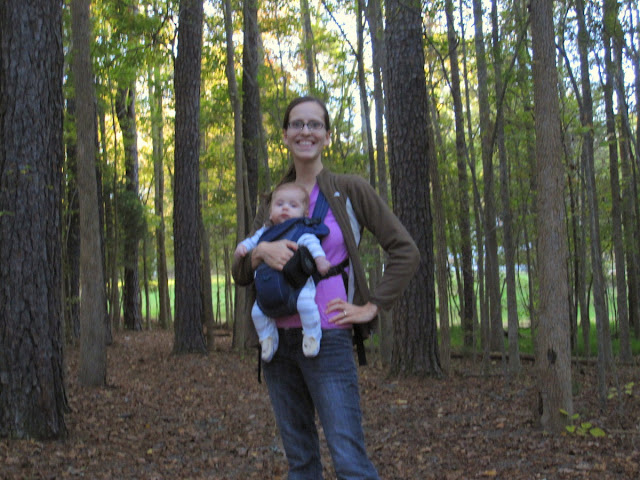 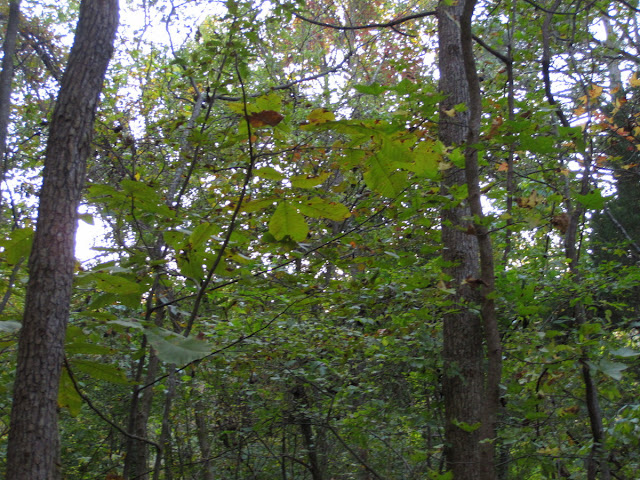 And then pushed the camera into my hand and ran off to balance on this log: 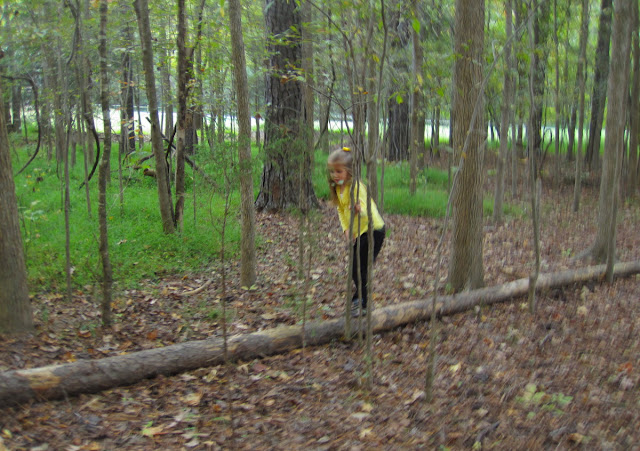 It was a short walk—we beat Andrew and Miriam to the house. 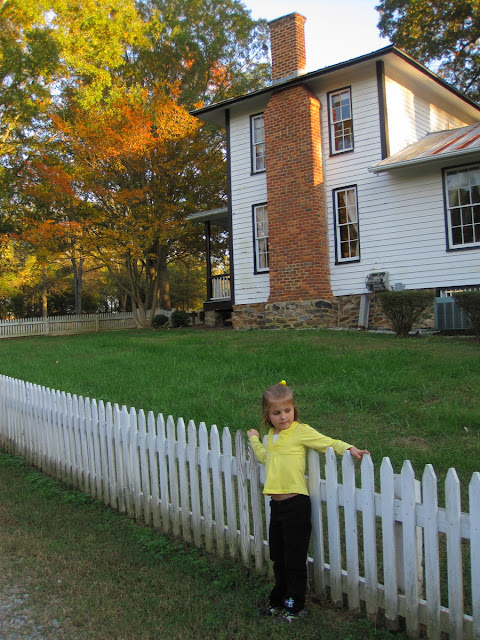 It reminded both the girls of Nauvoo and they really wanted to go inside and look around but it's only open on the weekends so we couldn't. We did, however, enjoy sitting on the rocking chairs on the veranda. It doesn't get much more southern than that, does it? 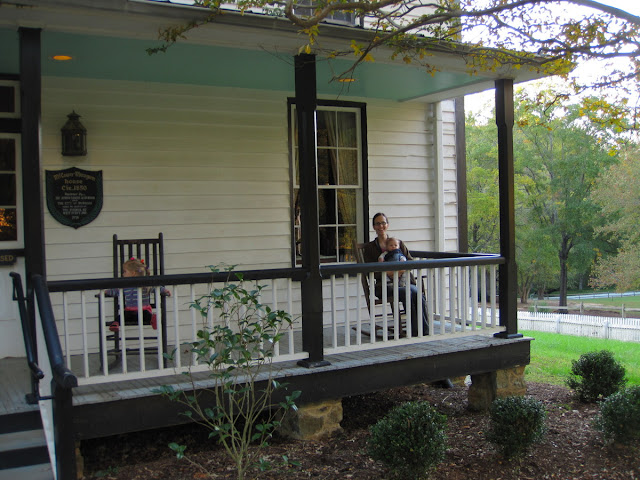 We're definitely planning on coming back to do some more exploring here! And perhaps we'll even come take some pictures with our nice camera. Rachel had picture day at school a few days ago and we didn't purchase a package—a decision we made long ago—but we promised her that we'd take "school" pictures. I was thinking of doing them at Duke Gardens but now I'm thinking we might just do them at West Point on the Eno. We could probably get away with taking them anywhere because it seems like everywhere is beautiful around here!
Posted by Nancy at 11:08 PM