We're coming into midterms here and Andrew is incredibly busy. By extension I am also incredibly busy, pull 12-14 hour shifts of full-time parenting during the day and always on call at night. This week was awfully tiring so I was looking forward to having Andrew home this weekend but, alas, he had a big study group thing and was gone all afternoon. At least we had him home for the morning.

He left shortly after President Monson announced the new ages for missionaries, which was a pretty exciting announcement. He then set up his phone to play conference while he drove to campus (since General Conference isn't on any local radio channels here), leaving me with the girls and the baby and a huge pile of clean laundry to fold. 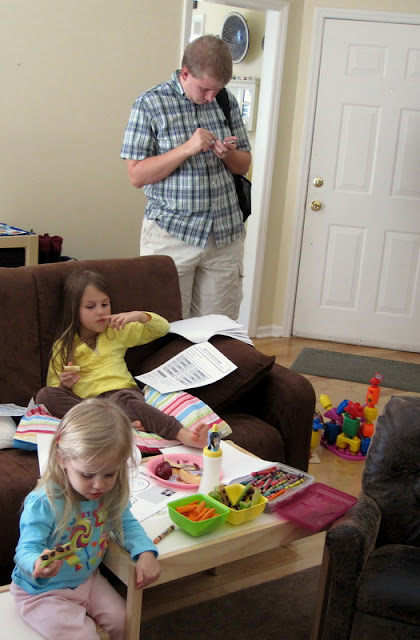 I saved the laundry specifically for the morning session of General Conference because I can simultaneously listen and fold superbly well. 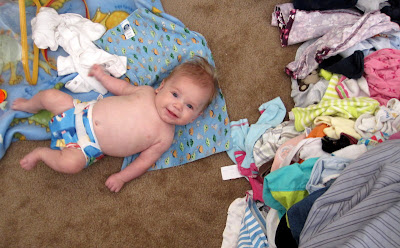 Something I can't do superbly well is juggle three children while listening to something else. My brain simply can't be pulled in that many directions at once.

Did the prophet just say he needed a drink? No...that was you. And you know how to turn on the bathroom light, which shineth on a hill... I think his tie is purple, too. Yes, he did just say science—I know you like science. Please don't yank on your brother's arms. He's talking about service. Uh-oh—you'd better pick up those crayons. Don't stick that raisin in your nose!

That's kind of how the morning session of conference went. It was good, of course, but parts of it are still a mystery—just another reason to read the talks later, I suppose.

After the first session was over we went to the park to get some of our wiggles out. Along the way we saw a lot of butterflies, lazily flitting among the fallen leaves (I'm not really sure why the leaves are falling since it hasn't even been cold enough to frost here, but they're a-fallin' gently anyway). Rachel took this picture of one of the butterflies: 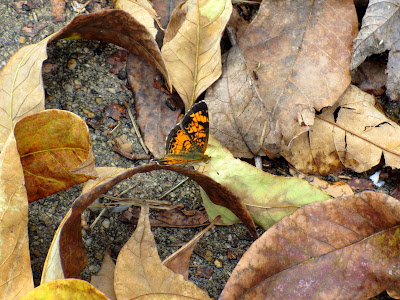 Miriam wanted to swing, of course, which was fine except that I told Rachel there was no way I was going to lift her into the baby swing. The "big kid" swings are on the completely opposite end of the playground from the baby swings so I can't really push both girls and Rachel has yet to master the art of  pumping. She decided that she'd rather push Miriam, who naturally only wanted me to push her. 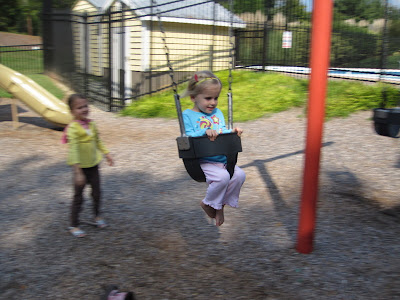 Then she asked if she could hold Benjamin for a while but he wasn't quite on board with the idea. 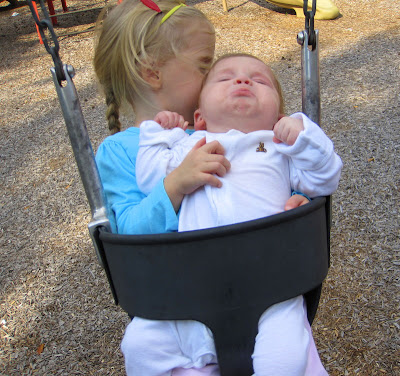 Part of the reason he was so upset about swinging might have something to do with Miriam screeching at Rachel to stop pushing her (because she only wants Mommy to do it). 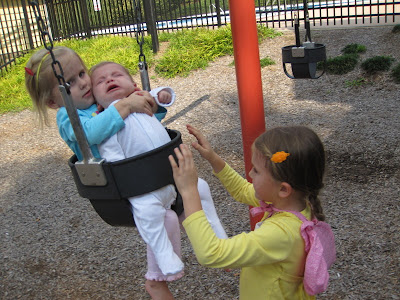 Miriam was one grumpy child and Rachel was bored playing by herself, so I vetoed any further swinging and suggested that we play on the slides. Miriam didn't want to until I told her I'd go down with her. 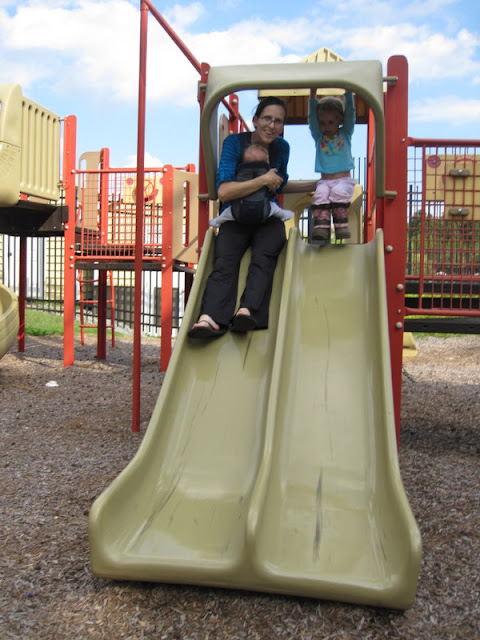 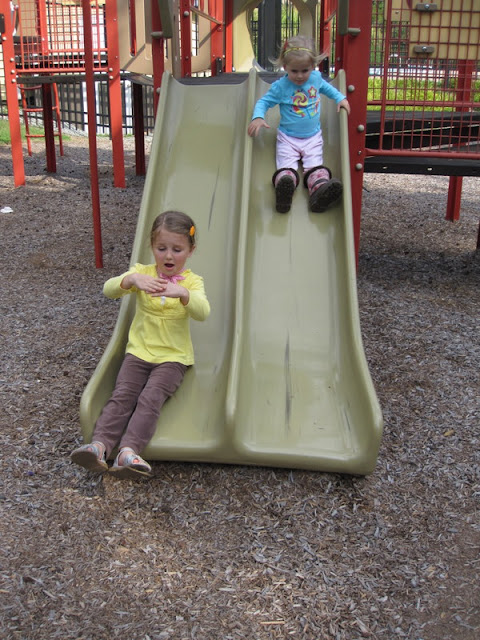 Apparently it was a pretty impressive demonstration because... 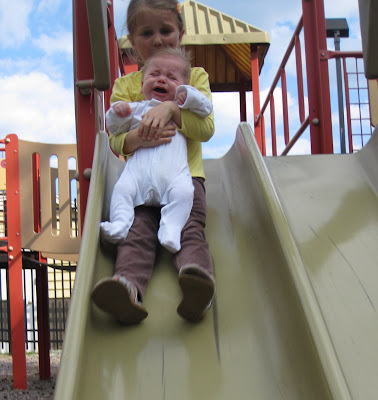 I let her take Benjamin down the slide. He wasn't sure how much he enjoyed that second ride. 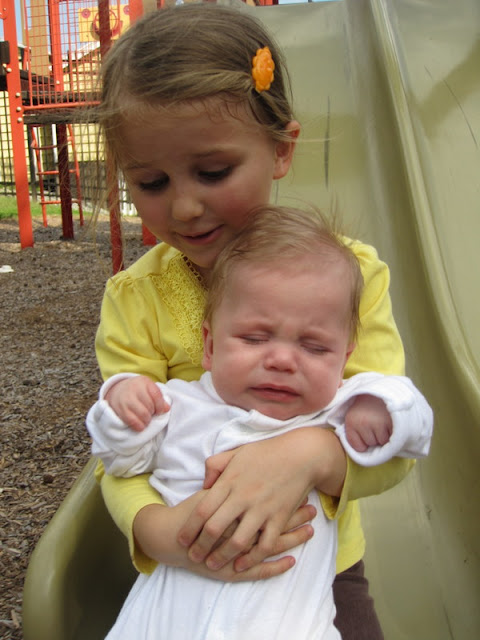 After realizing he was still alive he relaxed a little. 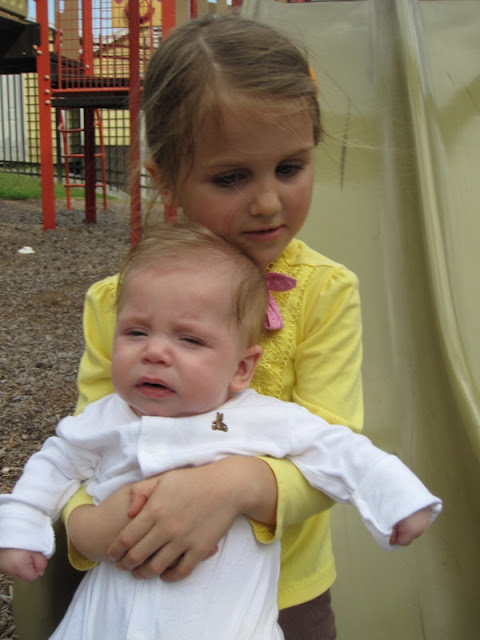 Then it was Miriam's turn to take Benjamin down the slide, of course.

After that he'd pretty much had it with slides so we headed over to the "big kid" swings and the girls did their own thing while I consoled Benjamin. 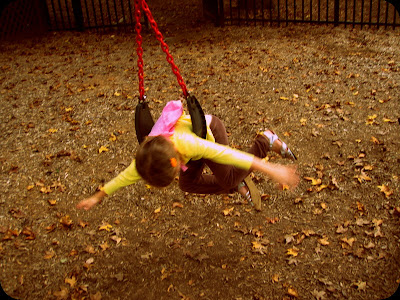 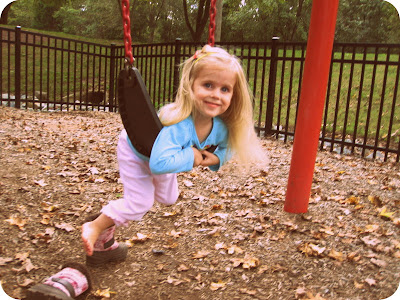 We snapped a quick group picture and then headed home for the second session of the day. 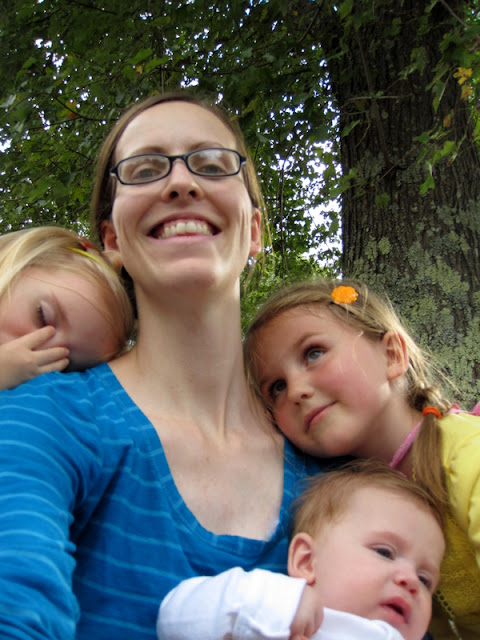 We quickly reviewed the story of King Benjamin from the Book of Mormon and erected a tent of our own to sit in while we watched conference. It was a little pathetic at first... 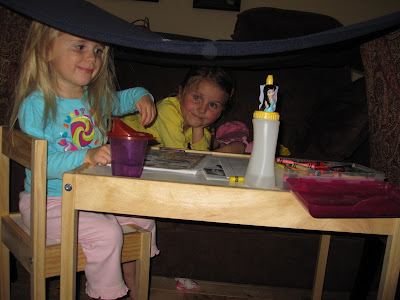 But one baby gym (stripped of dangly toys) and one broom handle later and it was pretty rockin'. 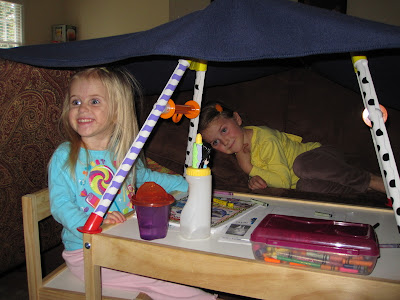 We don't have a television but Andrew had set up conference on the computer, so I naively pushed the play button when we came back home, thinking it would automatically begin playing the second session (it did say "live," after all) but instead it started replaying the first session. I'm embarrassed to say that while I was sitting there having feelings of déjà vu, Rachel was bouncing up and down saying, "Mom! Why is President Eyring conducting again? He already had a turn! And he just said 'first session!' Isn't this the second session?" I told her that I hadn't heard which session he had said because she was bouncing up and down, screaming. But when President Monson said, again, "it's also as a courtesy to those arriving tardy..." I was like, "Ohhh...this is the first session..."

Took me long enough! But I figured it all out in time to tune into the second session while the choir was still singing the opening hymn.

I'm definitely looking forward to tomorrow when I won't have to deal with every. single. thing. the kids want while trying to pay attention to conference. Hurrah for equal partnership in marriage (and parenting)!
Posted by Nancy at 12:27 AM