Today I'll show off our bedroom/office/nursery, where we keep our bed, our books, and our baby. I went to an interior design class last weekend and picked up a few tips (it was only an hour long) and have been trying to apply them around the house. I'm still not very good at it but I think I like this wall a whole lot:


Truthfully I haven't done very much to it. The nursery is at the foot of our bed and consists of a glider and a pack'n'play (with bassinet attachment). The wall behind the bassinet is empty; I haven't decided what to do with it yet.

The windows were already there; we just lowered the top half of our blinds (they're pretty neat blinds; they're called cellular shades and can open from either the top or the bottom and maybe even both (we haven't tried that)) to let some outside in (a little something I learned in my class). I love looking out our windows and seeing the little forest behind our house. And, of course, we're fond of those books. We have far too many books; I'm still trying to work out a way to organize them so that we'll know where to find them all while still allowing for a bit of aesthetic appeal. Our main problem is that we have too many books for our bookshelves.

Sometimes it makes me cringe that the words "organize" and "order" are in that verse because here's Andrew's office: 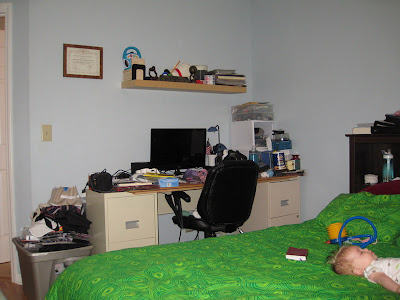 He intended to have his desk completely organized before the semester started but he missed his deadline and it will now likely remain in this entropic state until the end of the semester. I'd tackle it myself but since he uses that stuff (ie. technology hud) more often than I do it's best if he knows where it is. He's still completely lost in the kitchen (and only partly because I'm still moving things around every few days) and is always asking me where things are, even if they've been in the same place the whole time we've lived here.

"Third drawer on the right. Still."

Sometimes, sadly, I don't even know where things are and we have to go on a hunt through the kitchen to find it. Once I lost the liquid measuring cup in the fridge—I had used one of our measuring cups earlier in the day so it was at the bottom of the sink and I needed a clean one to measure something else. I couldn't find one anywhere. And then Andrew reminded me that we had made syrup to go on pancakes and that I'd stored it in the measuring cup because we didn't have a syrup bottle to hold the leftovers, so it was in the fridge full of syrup. I can't believe we only have two liquid measuring cups. I'm used to my mother-in-law's cupboards and she has a whole set of them—there's at least four if not more!

I still have a long ways to go in the kitchen.

Today Miriam was putting away the dishes and ran to come find me so that I could "look at this!" because I just had to see it: 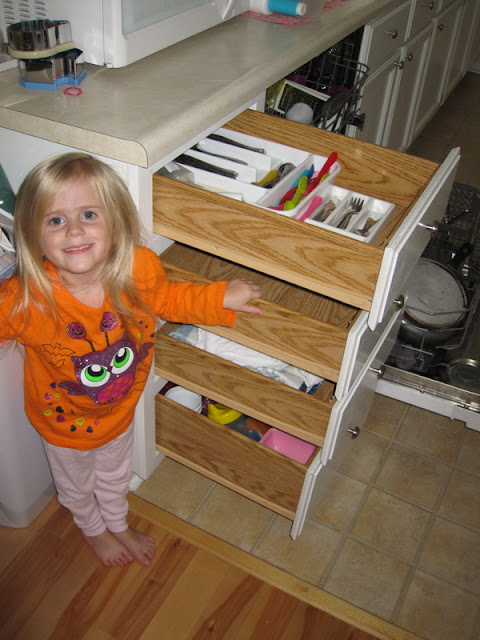 She'd pulled all four drawers out and was so proud of herself.

You can probably see from this picture that the second drawer is empty. I'm not really sure what to put in it yet and so it sits empty. It used to hold the pot holders but those have since been moved to the drawer by the stove, where the cookie sheets used to be (which are now in the far cabinet by the window, where something else used to be (but which is now somewhere else)) and now I'm just at a loss of what to put in it.

Maybe all my baking stuff—measuring cups and spoons, the rolling pin, that kind of thing? Throw the apple slicer in there, too, so that I'll have a new place to tell Andrew the next time he asks me where it is, maybe? Maybe I'll just keep it empty, like a trick drawer of sorts.

The possibilities are endless.
Posted by Nancy at 9:04 PM