This afternoon we went for a little walk along the Eno and also checked off our last North Carolina adventure. The Mangum house and the photo museum were open, so we toured both of those before going on our walk. Unlike the mill, which had to basically be rebuilt after it was mostly swept away in a flood, the house is mostly original. They even have a lot of the original furniture. They have an old picture of the front room sitting in the front room and have the furniture arranged identically to how it was in the picture.

One of the Mangum sons was a photographer. He turned the second floor of the tobacco pack barn into a studio, complete with a dark room. It was neat to see his photographs. I've never seen so many old pictures of people smiling toothy grins before!

Here are Rachel and Benjamin in front of the tobacco-pack-barn-turned-photography-museum: 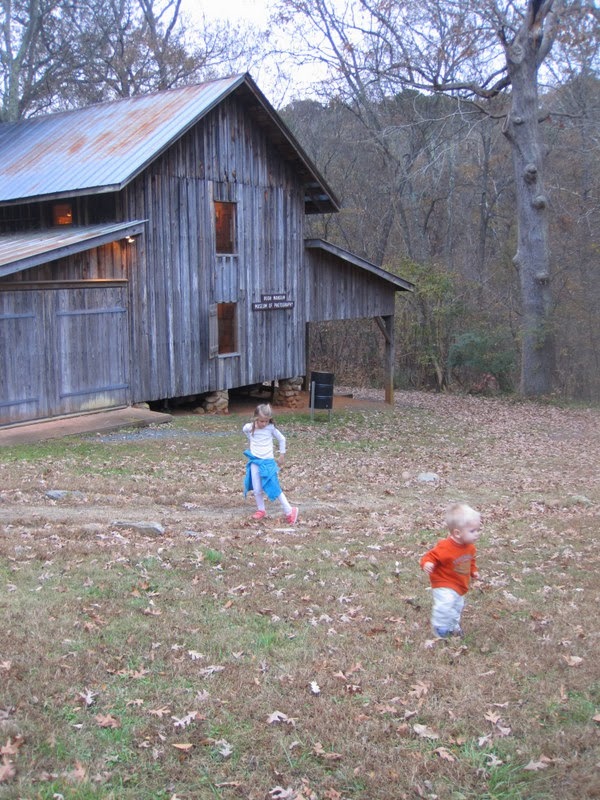 Benjamin picked out his outfit today, or at least the sweater. I pulled out the next-up size of clothes for him yesterday and this morning he tugged this sweater out of the pile, gave it a big hug, and then asked me to help him into it. He seemed to enjoy wearing it. 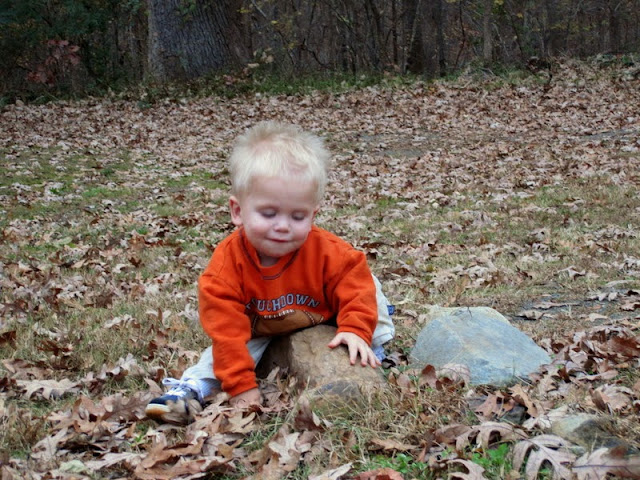 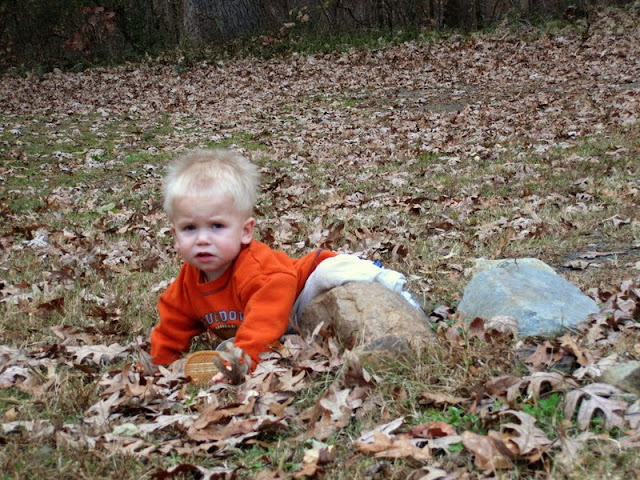 While Andrew took Miriam back up to the Mangum house to use the restroom, Rachel and I followed Benjamin as he toddled around. 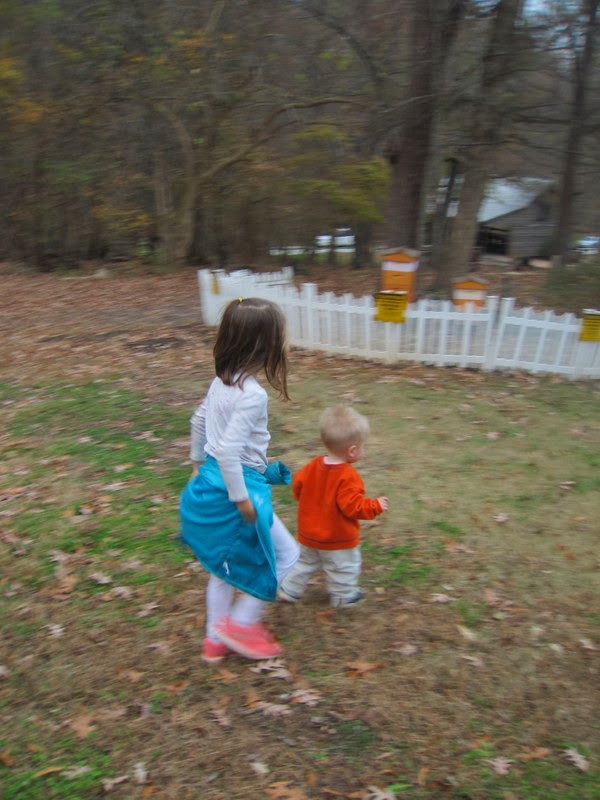 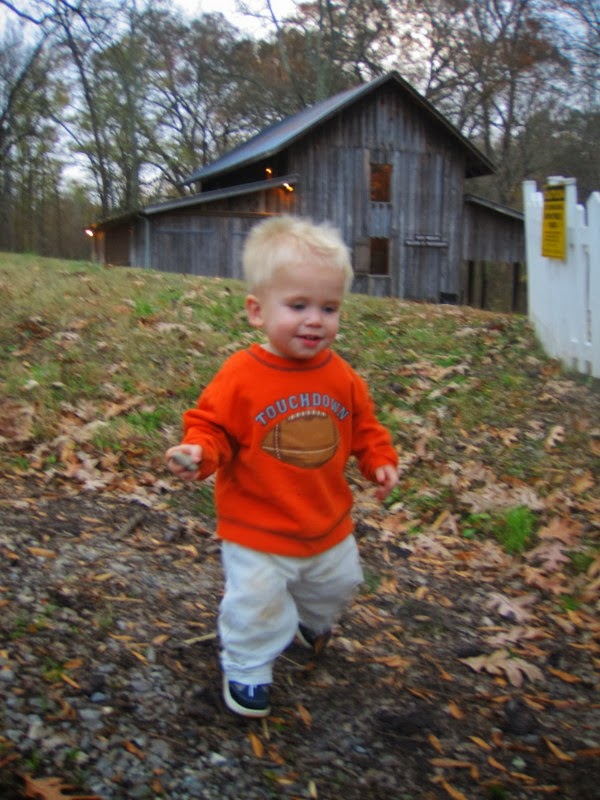 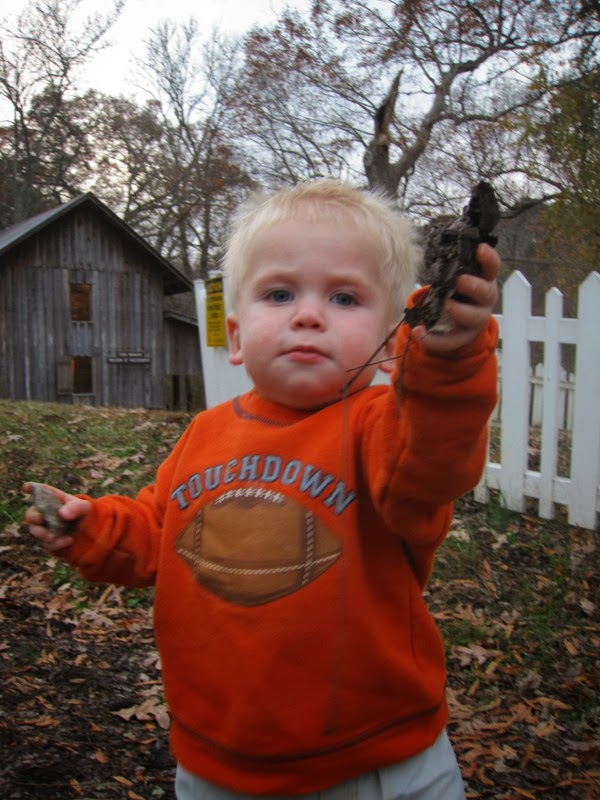 Once they'd rejoined us we all headed off to the river. 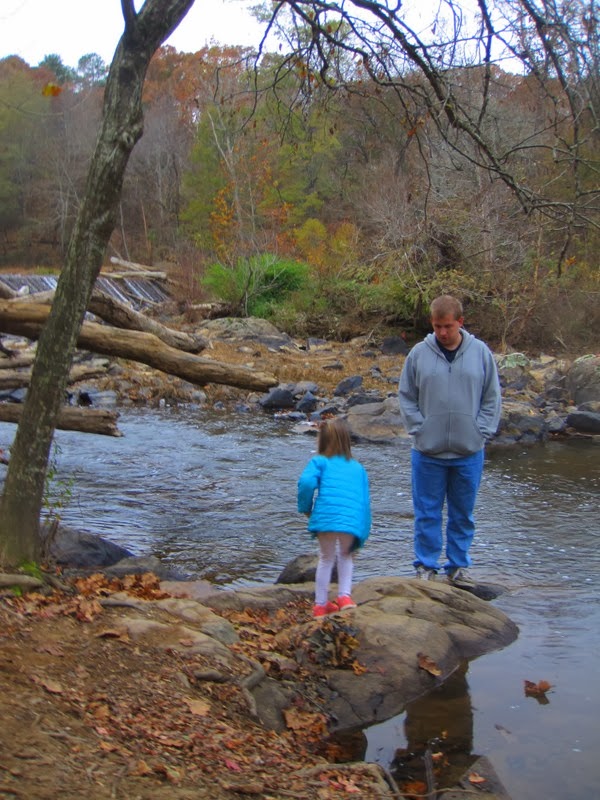 We had quite a bit of flooding this summer. Not anything like, you know, Alberta or Colorado, but a fair amount. I think all these logs (behind Miriam) were pushed in place by the flood. Andrew thinks there are far too many of them for that to be possible. But how else would they have gotten there? 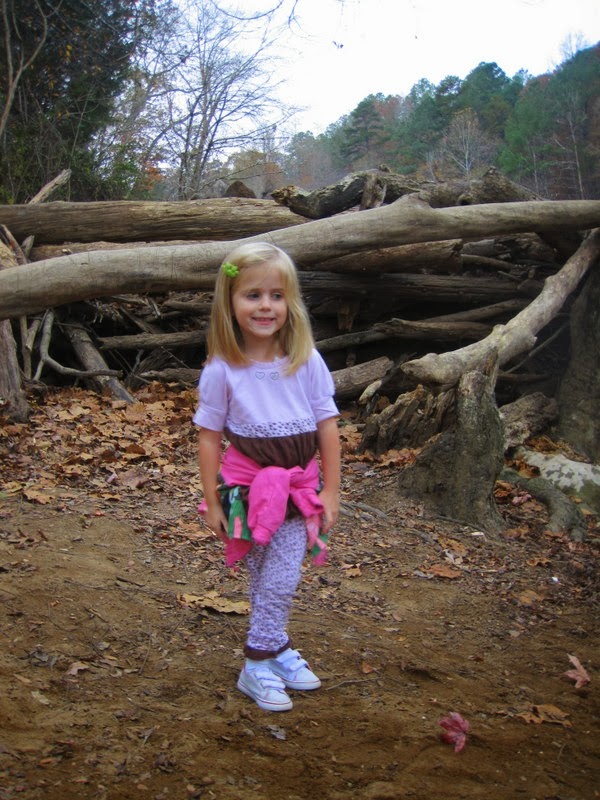 I mostly think it's a little sad that we didn't go hiking at the Eno once this summer. I suppose those five weeks of crazy rain didn't help matters, nor did our week-long trip to Florida, because our summer vacation was only six weeks long this year (thanks to starting year-round school). Five weeks of rain plus one week in Florida equaled no hiking for us.

Had we gone hiking more we might have noticed when the trees took up residence on the bank of the river. 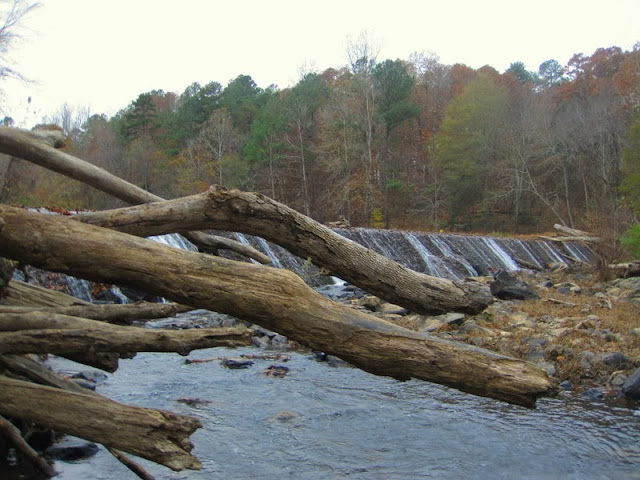 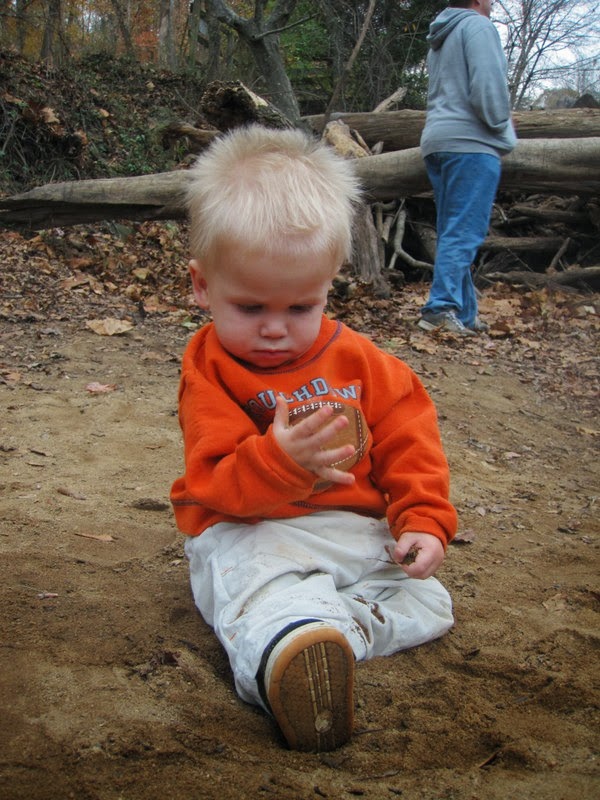 Most of my pictures ended up blurry today...but that just proves how much everyone was moving, right? 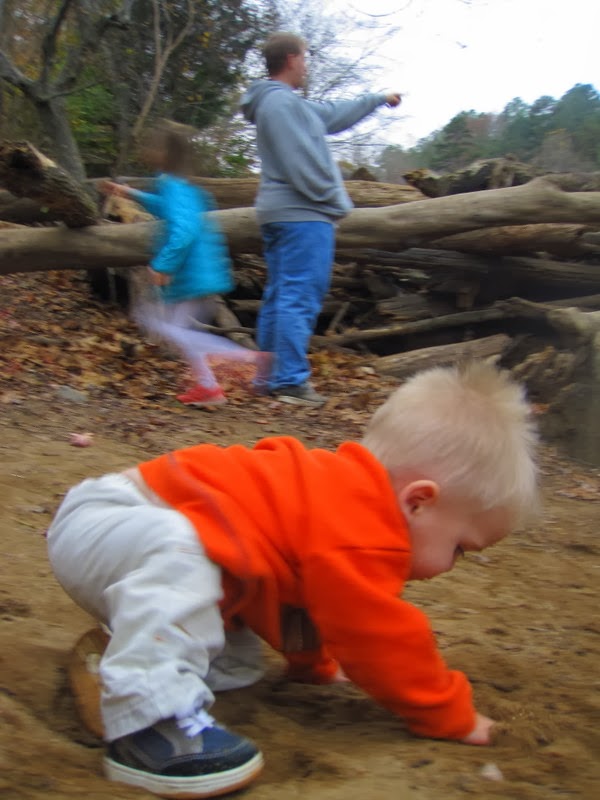 Rachel decided she wanted to walk across one of the logs. 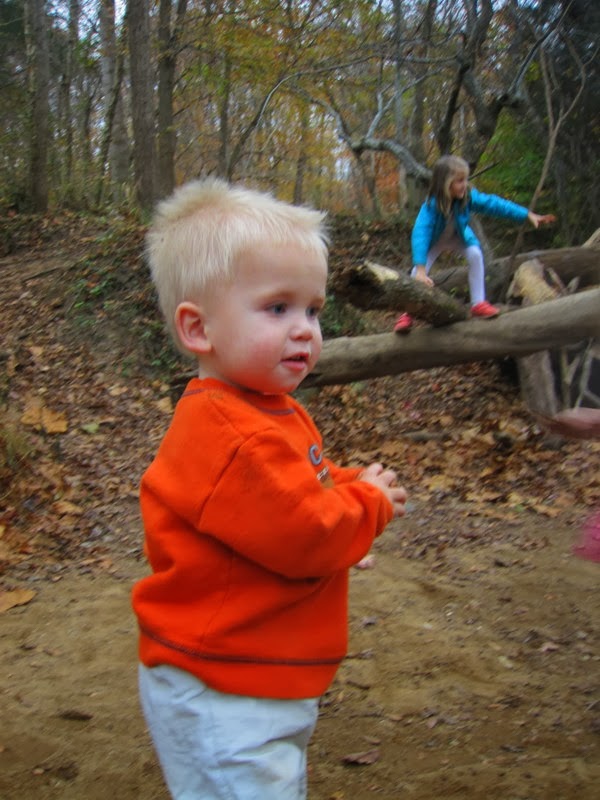 Then she chickened out, declared she was "terrified" and asked for some help. So Andrew helped her finish walking across. 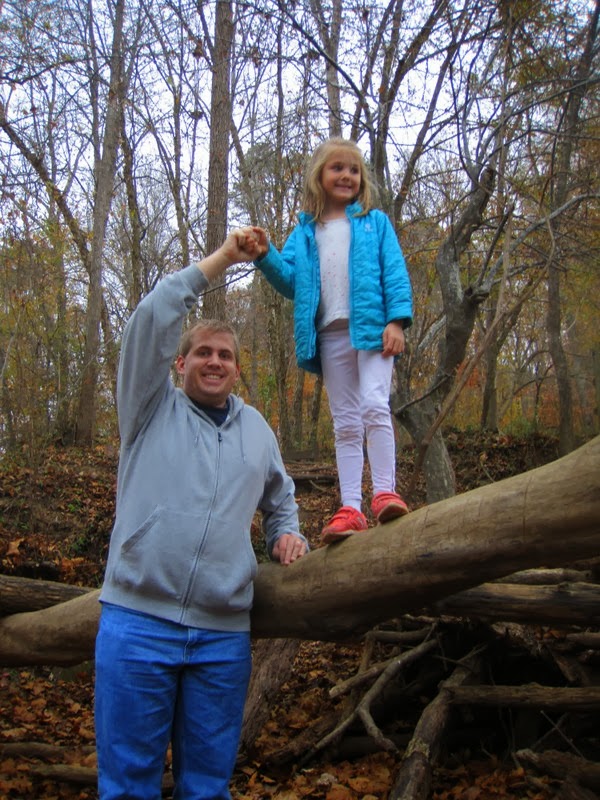 She asked to be helped down pretty soon after I took this picture: 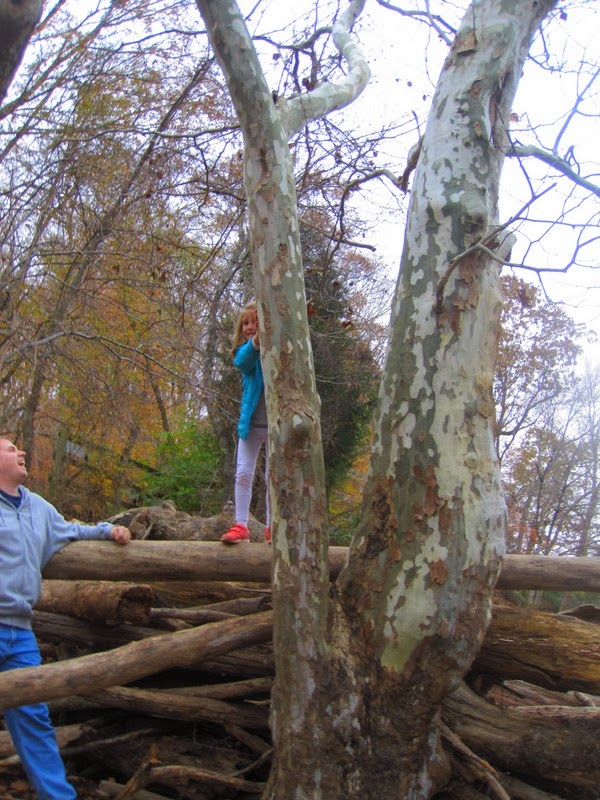 Benjamin was a bit braver up on the logs, but all he did was sit there; he didn't try to walk across them. 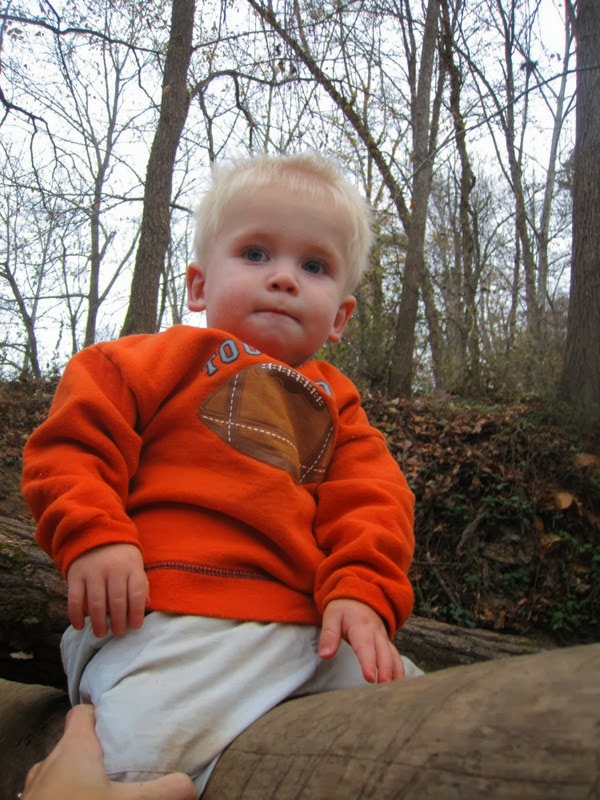 We finished up a little hike up in the hills above the river, stopping by a little teepee hut to play for a few minutes before calling it a day and going home. 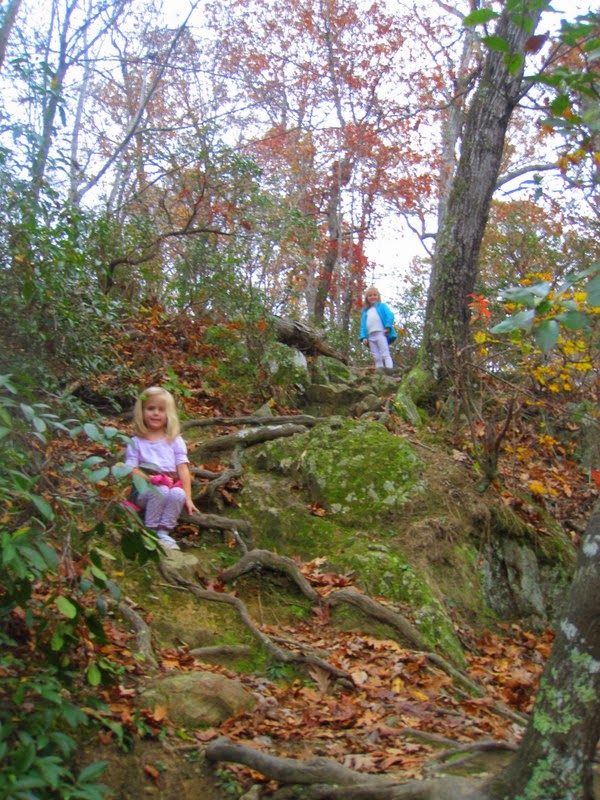 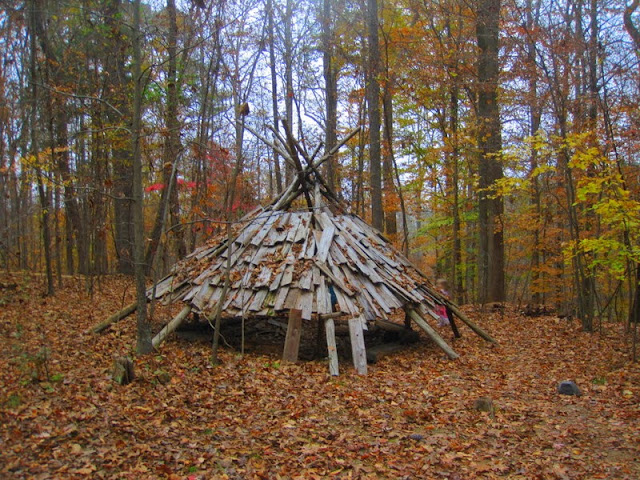 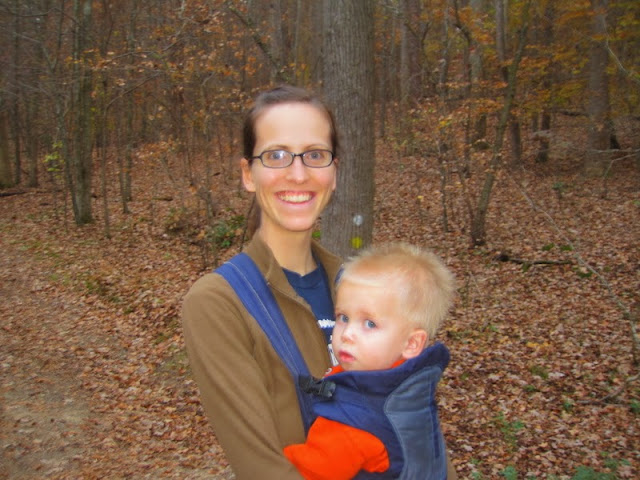 At dinner we discussed our favourite parts of the day. Miriam's was hiking. Rachel's was the tour of Mangum house.

"My favourite part of the day is a big, fat secret!" I said.

"What?" Andrew asked before he remembered. "Oh, that."

"What sort of secret?" Rachel asked.

"Does it have anything to do with Christmas?" Rachel asked, her eyes glistening. "Is it a Christmas surprise?" Then she sighed and the sparkle of excitement vanished from her eyes. "Wait...no. It's too early for that. Dad wouldn't be planning any Christmas surprises. It's not even Thanksgiving yet."

"That's a good point," he said. "It's too early for that. No Christmas before Thanksgiving!"
Posted by Nancy at 11:53 PM