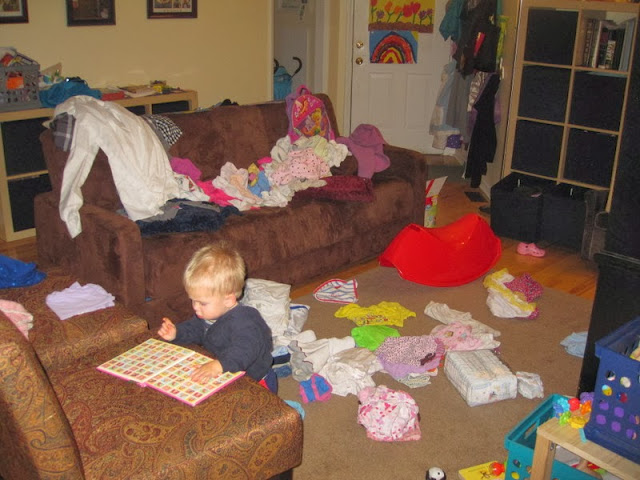 We'll pretend it looks like I've been productively doing laundry all day (and ignore the fact that I actually started the laundry on Monday). I've just been so worn out lately.

This morning I couldn't even leave the house. Between soiled diapers and children not wanting to put clothes on and an entire box of cereal being dumped on the floor and Benjamin's hives returning with a vengeance, being on hold with the doctor's office for a half hour (and having the call cut out before I actually spoke to a living, breathing human being), I managed to be late to my visiting teaching appointment...at noon.

We won't even mention the 10:30 appointment I completely missed (but don't worry because I called the sister I visit teach and broke down crying when I explained that I just wasn't going to make it out the door (which is awesome because visiting teachers are supposed to help their visiting teachees, not the other way round (though I do like to think of visiting teaching as set-up friendships because that's usually how my visiting teaching relationships turn out, so they really are two-way, I suppose)).

She said she was fine. So we'll count that as her visit for this month. I sure assessed her needs great!

I suppose it worked out well because when I met up with my visiting teaching companion at our twelve o'clock appointment, she ended up having to leave early because her 22 month old threw the world's biggest fit (not even kidding), so she just loaded up her four-year-old and 22-month-old and headed out the door, apologizing for leaving early. And she's expecting twins, bless her heart!

After visiting teaching I took Benjamin in to see the doctor. I felt like such a hypochondriac showing up at the doctor's office again after just being there and having a doctor friend check on Benjamin on Monday, but sometimes I just have to play it safe, especially with Thanksgiving coming up. Everything I read online said to contact your doctor if the rash was still around after seven days. It's only been five days but seven days will be on Sunday, which meant we'd have to wait until Monday, and that's right before Thanksgiving...and I figured the clinic would be super booked then.

The doctor was really nice about it. He walked in, took one look at Benjamin and said, "Well, isn't he a sight for sore eyes! Why don't you tell me a little bit about what's going on?"

So I told him everything.

He listened to Benjamin, peeked in his ears, and even made Benjamin say "ahhh."

He concluded that Benjamin is suffering from hives caused by a virus—not one of the childhood-five, just a random run-of-the-mill virus, likely the same one that caused his croup (but maybe a different one). He said the hives don't look like an allergic reaction to him—they're too tame. They don't seem to be bothering Benjamin too much and aren't incredibly raised and swollen, so though they look bad they're probably fine. He said Benadryl won't hurt but it's also not necessary. The hives should clear up anytime within a couple of hours to a couple of weeks (or longer).

Then he said, "But that rash is beautiful! Can I take a picture? I want to show this to my class."

So I let him take a picture of the rash. He actually took two: one of Benjamin's stomach, which was one gigantic mass of welts, and one of his leg, which had "targets" on it (little bumps like bug bites).

And then we came home and I tried to finish the laundry. Andrew said it was fine that the house was a disaster (I did clean up the cereal) and shared this with me: See My Messy House.

I could be the poster child for that site.

We had a good dinner, though, and my kids are cute: 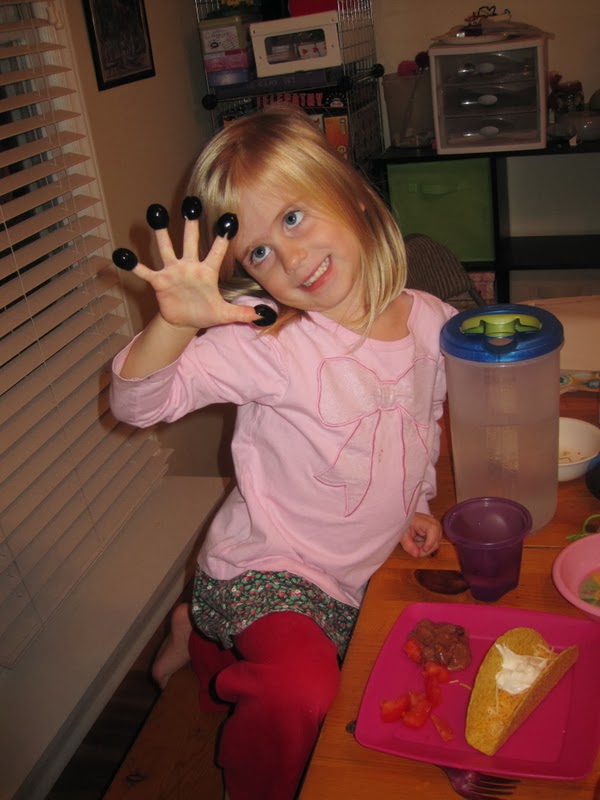 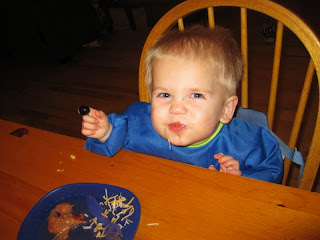 Rachel wasn't up for posing with olives on her fingers, unfortunately.

In other news, we just finished the final chapter of Prince Caspian and I realized that while I've been saying, "Bugly Bear" this whole time it's actually "Bulgy Bear." So I'll have to tell you about Gandlaf and Blipo sometime...
Posted by Nancy at 10:57 PM