Rachel's teacher has a "pumpkin day" in his class every year, embracing Halloween as an educational opportunity rather than trying to ignore it while also trying to keep the children's attention. He is such a great teacher. He even sent home a note inviting Miriam to come participate in pumpkin day as well. She was thrilled to bits and pieces; Rachel was equally excited.

Miriam wasn't the only preschooler there (though Benjamin was the only baby). The teacher had invited a few other future-students to participate. He says that he loves having the little kids visit his class because (a) it's good for the students to read to younger kids, (b) the teacher thinks it's fun to show current students pictures of themselves in his classroom from days of yore, and (c) he figures it's better to have the parents with little ones there rather than not have enough parent volunteers.

Visiting Rachel's classroom worked out really well for us this year because when Andrew came home on October 29th I had to tell him that we had no pumpkins and no candy because all we'd done while he was gone was cough, sneeze, b;ow noses, change diapers, throw up, and stay up all night screaming (while also managing to turn the house into a complete disaster). I was hanging onto sanity by a thread. Pumpkins? Candy? Ain't nobody got time for that!

So here was an offer to get two pumpkins (one for each child who cared about such things) for $4 and all I had to do was show up and help 50 kids measure and weigh their pumpkins (and then stand back and pray no paint splattered in my direction)? Deal. 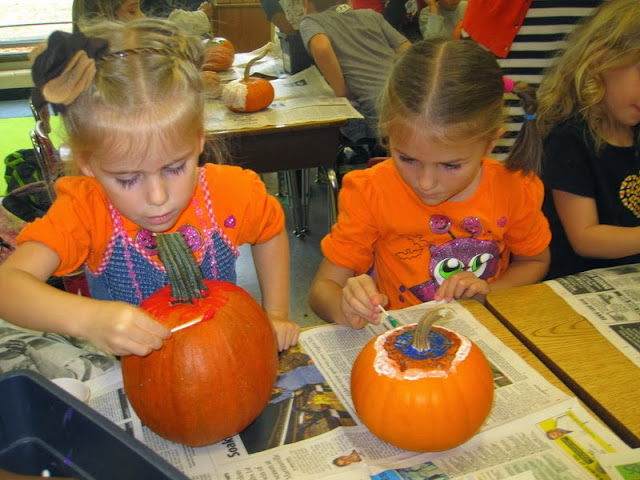 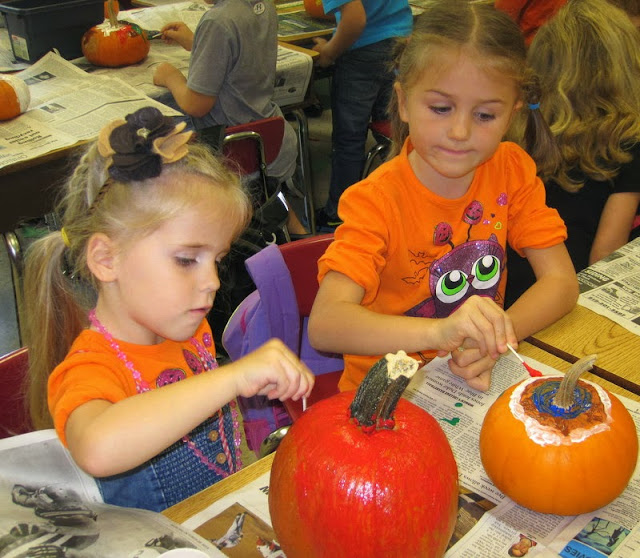 Benjamin wandered around getting into things (books and blocks and stuffed animals) while Miriam pulled a chair up to Rachel's desk and got busy. They learned what an estimate is (a good guess) and what circumference means (how big around) before rulers, tape measures, and scales were passed around. It was pure chaos! But the kids had a blast! 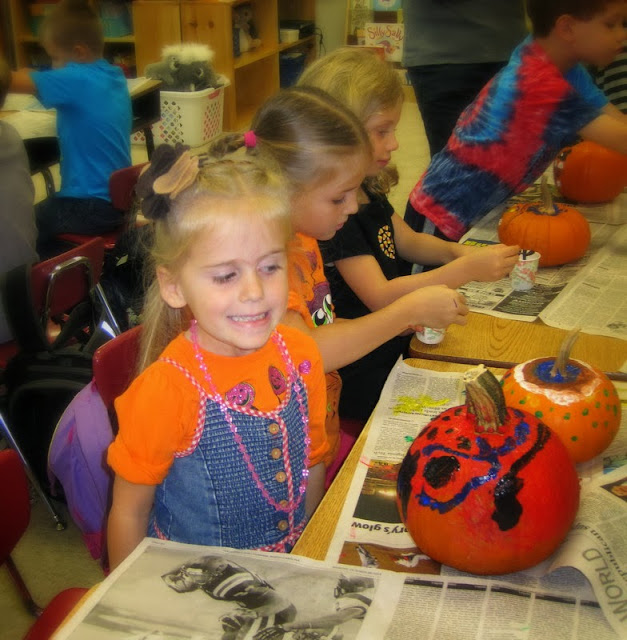 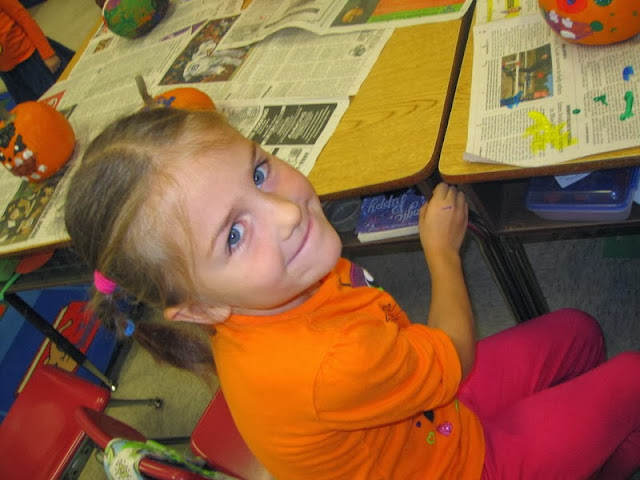 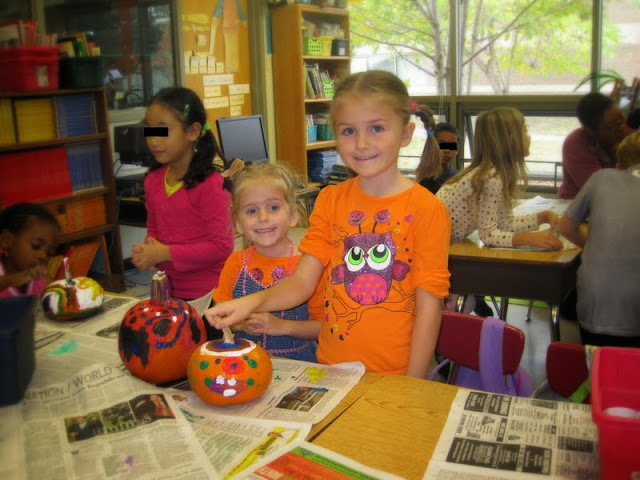 After cleaning up our work stations we were all herded outside to get our pent up Halloween excitement out on the playground. The kids were allowed to just run around and do whatever they wanted, which was so refreshing after dealing with "recess coaches" all last year. 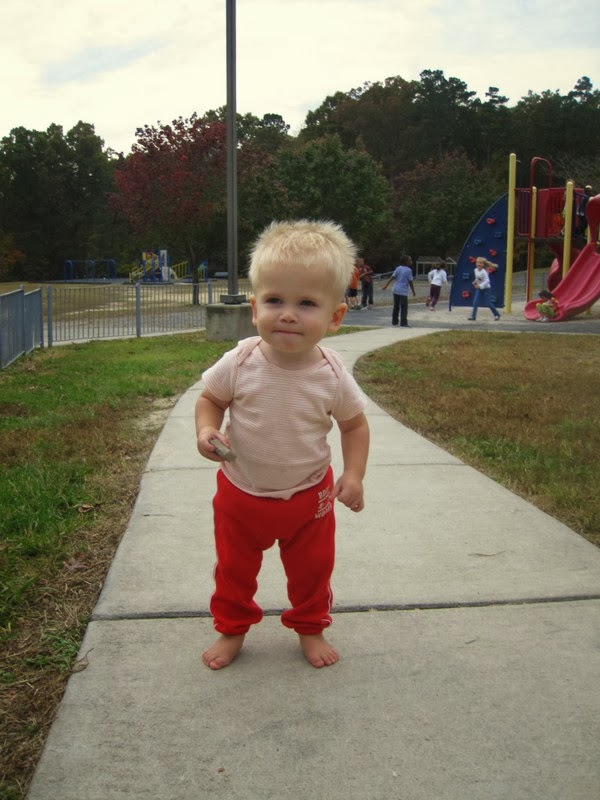 It was fun to see some neighbourhood children as well as children from our ward. I loved volunteering at Rachel's old school as well, but we didn't know anyone outside of school. It's fun to come to her current school and have kids in other classes coming up to say hello to us—because they know us outside of school. Somehow we just missed being part of the community at Rachel's old school.

Rachel begged me to stay for the rest of the day but I just couldn't because there were a number of things that needed to be done at home. I did, however, cart her pumpkin home for her so that she wouldn't have to carry it home on the bus. While I was retrieving her pumpkin, another one of the grade one teachers came up to Rachel's teacher and asked, "Is Rachel Heiss's mom here today?"

"Oh, good! I was hoping you'd be here. I have a pumpkin for Diego. Would you mind taking it to him? I think it would be better if he got it today rather than tomorrow or next week."

So I ended up taking three pumpkins out to the van! Diego was excited to get his pumpkin, though! He was so hoping to make it to school on Halloween, but he often feels too icky in the mornings to make it to school. He missed the field trip to The Very Hungry Caterpillar last week and was so sad about that. Some days he wakes up and feels good enough to go to school but no one's really pushing him to commit to school attendance this year.

After delivering Diego's pumpkin we went home and got down to business. I made a healthy pre-trick-or-treating dinner and, at the request of our girls, some pumpkin juice. Between the bread I made on Wednesday night and the juice I made last night, the rest of last year's jack-o-lantern has been used up. Now I have to try to clean the paint off this year's pumpkins so we can cook them up. Our only 'real' jack-o-lantern this year was our plastic one, but no one seemed to mind. 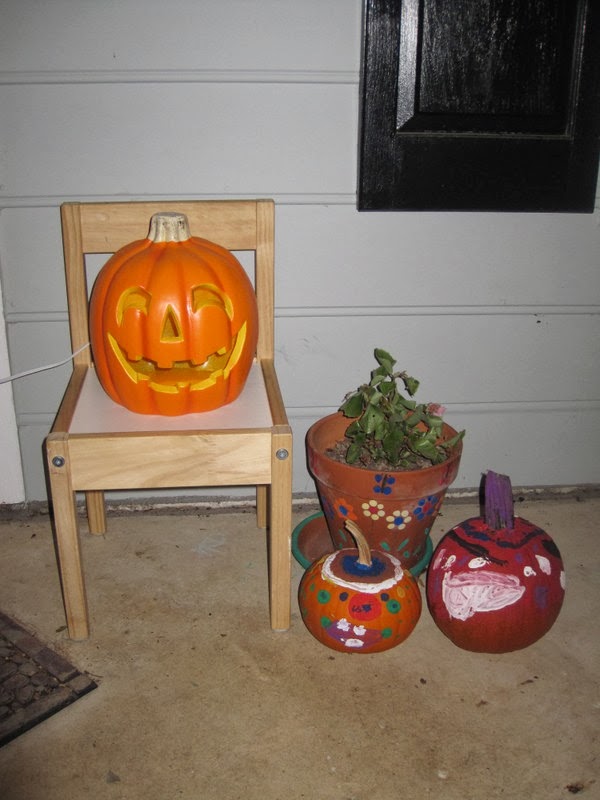 Our first stop trick-or-treating was at our home teacher's house. Neither he or his wife were home when we got there, though, because they were busy hunting down their run-away dog. We waited for them to show up and they eventually did, dragging a dog behind them. Benjamin was thrilled to meet the dog and giggled when the dog licked his hands. The girls did their best to keep their distance. 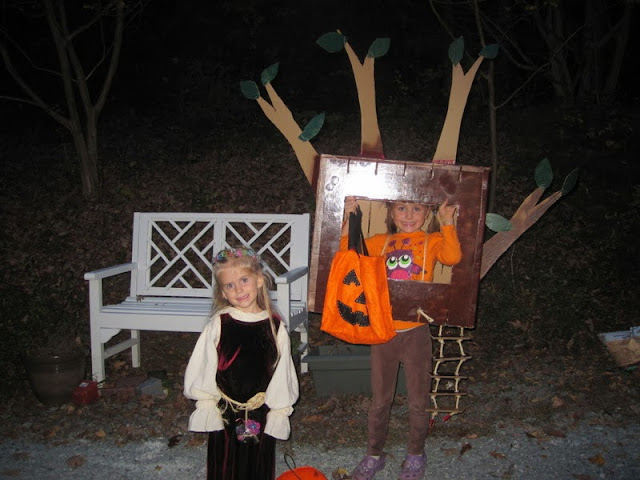 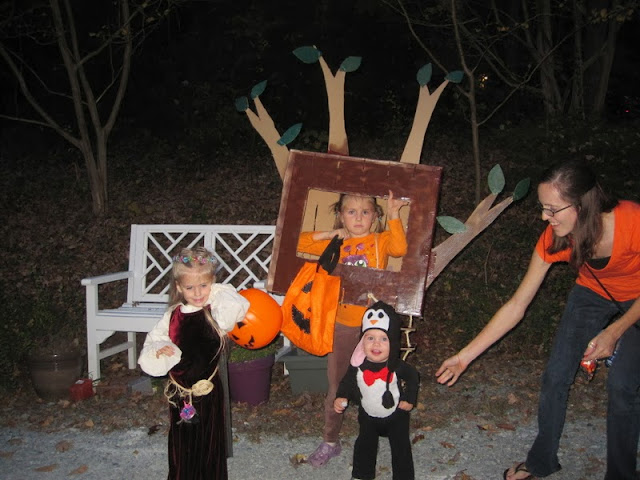 Our home teacher lives down a long driveway so he has to recruit trick-or-treaters to his house. It's well worth the trek though! They had good treats! We had a fun visit with their family before heading back to our neighbourhood to do our real trick-or-treating.

Andrew stayed home to pass out candy; I went out with the kids. Miriam wasn't feeling too well and didn't want to walk, though she still wanted to go trick-or-treating so I pushed the double stroller around the entire time. Miriam got out for the first few houses but didn't budge after we'd finished our street. She just sat back and let Rachel do all the work.

And Rachel was a real trooper! Her treehouse was a huge hit. Everyone loved it! At one house the man handing out candy jokingly offered Rachel his iPad instead because he thought her costume was that good. "You win Halloween," he told her.

Hearing everyone praise Rachel's costume was difficult for Miriam and I had to keep assuring her that her costume was lovely. I even suggested that people might notice her costume more if she'd actually get out of the stroller but she stubbornly sat there and sucked her thumb.

Anyway, Rachel walked around with that boxy costume on for a good quarter mile before she asked if we could go home to change into her backup costume (last year's Hermione costume). We walked all the way home, let Rachel change, and then ran into Diego (who was feeling well enough to trick-or-treat after resting all day).

He and Rachel raced from house to house while his mom, grandma, Miriam, Benjamin, and I followed along behind. 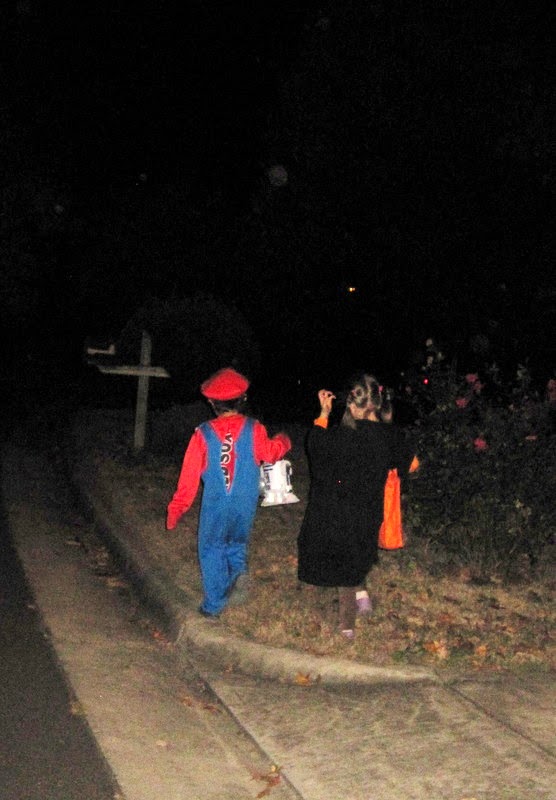 It was fun to get to chat with them while Diego and Rachel raced on ahead. They seemed to have boundless energy and were determined to hit every house. We did a mile-and-half loop (not including the time we spent in the cul-de-sacs)!

Around 8:00 people began dividing the remainder of their candy bowl between Diego and Rachel before turning off their light (to signal that, for them, trick-or-treating was over). It must've happened to them at a handful of houses. They thought it was awesome.

Rachel was hoping there would be a haunted house she could visit and the few spooky yards we came to did not disappoint her (even though they weren't technically haunted houses—she scares easily). A few yards were decked out with tombstones. One such "graveyard" even had a smoke machine!

The best house, however, had a sign up in their yard advertising a "spooky time" at the front door or a "friendly time" at the side door (both doors were visible from the street). Diego and Rachel went straight for the spooky, not even noticing the sign. Fortunately the spooks on the veranda realized they were little kids and they went easy on them. There was a group of older kids after us, though, and by the time we'd reached the street one of the "witches" on the veranda let out a cackle that started Rachel so badly that she took off running and didn't stop for several houses.

This year we had a couple of police cars patrolling the neighbourhood because last year a bunch of kids thought it would be funny to speed through the neighbourhood during trick-or-treating. That only happened once this year (three cars right in a row—zoom, zoom, zoom!) but the police caught up with them pretty quick. I don't know why anyone would think that would be funny—I mean, surely they wouldn't be laughing about it if they'd actually hurt someone (or worse, which was certainly a potential—Diego walked out in front of a car, but fortunately the car was going slow enough to stop and we were able to pull him out of the road). From what I hear, this year was a lot calmer (we didn't do much trick-or-treating in the neighbourhood last year).

I didn't get the kids home until 8:45 (we didn't do any trick-or-treating for the last half hour or so because we were retracing our steps and most of the houses had gone dark, anyway) and we came home to a lovely surprise: Andrew had cleaned the entire house while we were gone. He'd done the dishes, tidied the living room, and even attacked the kids' rooms! It was his Halloween present to me (and it made me so happy)!

It was a good Halloween, but I'm glad it's over!

I've already gone through the girls' candy and selected some to put in their stockings (Diego's grandma told me she did it every year when she had kids and I think it's so smart) and some to send to the missionaries from our ward who are out serving. We still have so much candy. I can't imagine how much we'd have if Miriam had been actively trick-or-treating as well!