After a rough night with Benjamin (again) I was trying to go back to sleep this morning when I remembered that I'd said we'd attend a Turkey Trot that the mother of a child in Rachel's class hosts every year. It's just an informal fun run for the kids as well as a diaper drive (and although we're mostly a cloth diaper family, I support babies everywhere having clean nappies to wear (unless you're into EC because that's awesome, too)). We brought a little package of diapers as our entrance fee.

The kids got to make racing numbers as well as signs for their parents to hold for them while they raced around the park. Here we are before the race, enjoying a little snack, and trying to keep warm (the girls didn't have their good coats because they were still in the wash from yesterday when they played in the mud). 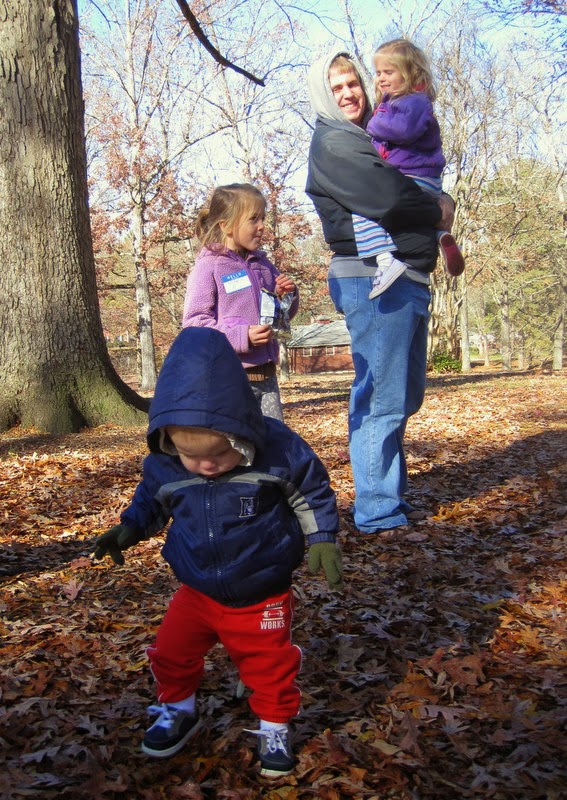 The course was a little loop of a trail and every time the children passed the finish line the kids got to collect a mardi gras necklace, which Miriam thought was awesome.

Rachel enjoyed her first lap, but then she fell and scraped her knee and was bummed out the rest of the time we were there. 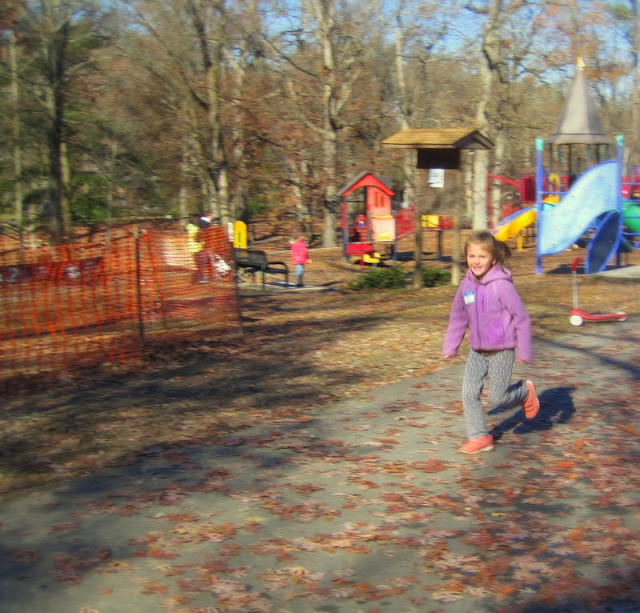 Miriam almost gave up on the first lap. But then Daddy ran with her for a little while to spur her on and she got so excited that she ran three more laps all on her own! 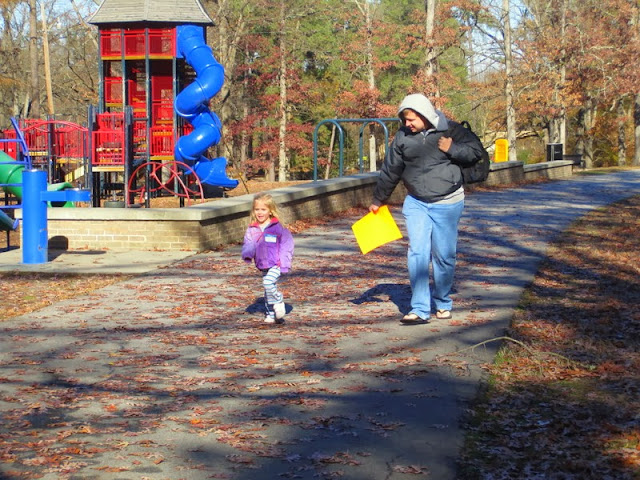 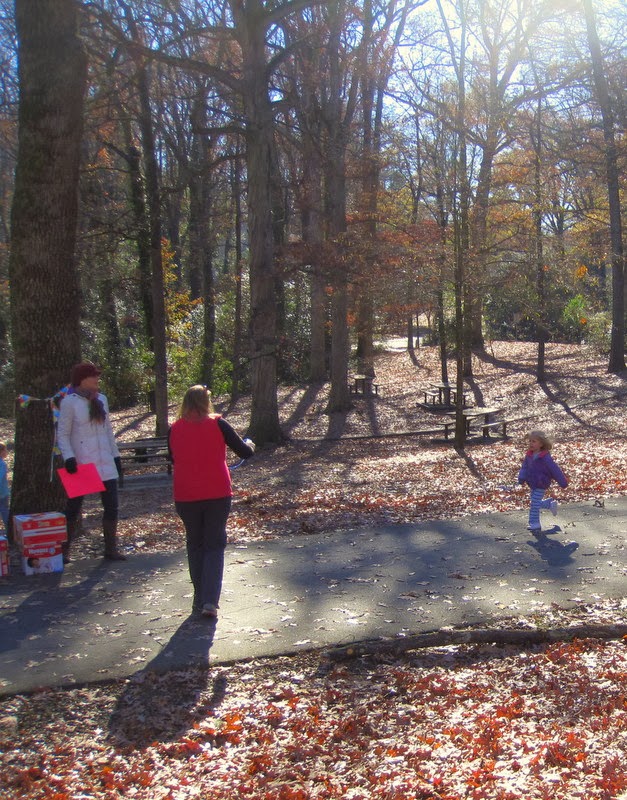 And here's me and Rachel, trying to finish up Rachel's second lap: 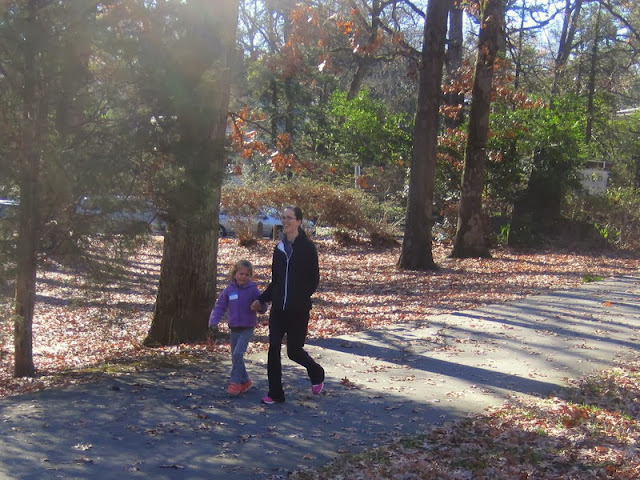 She couldn't decide if she was finished running or if she wanted to keep going so she cried while she ran two more laps before calling it quits for good.

And here's a little hold up at the necklace station where Miriam requested a pink necklace and the hander-outer kindly shuffles around to find her one. I think that's why she ran so many laps, actually. Between her and Rachel they earned seven necklaces and only one of them was pink (the one Miriam requested specifically). 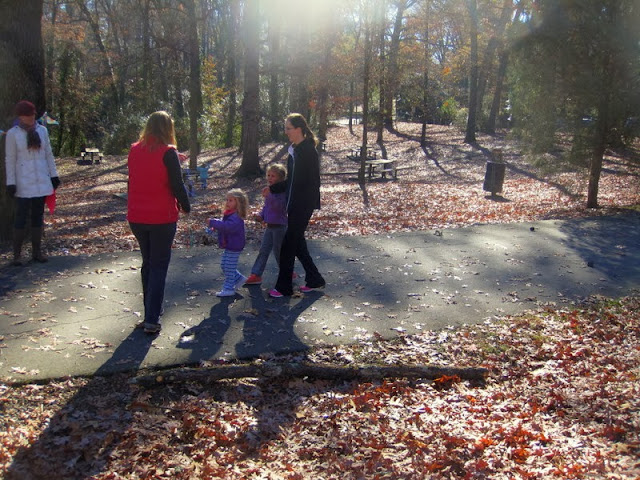 I think this was Miriam's last lap. She was a little less motivated to continue after this since she'd already gotten her pink necklace. 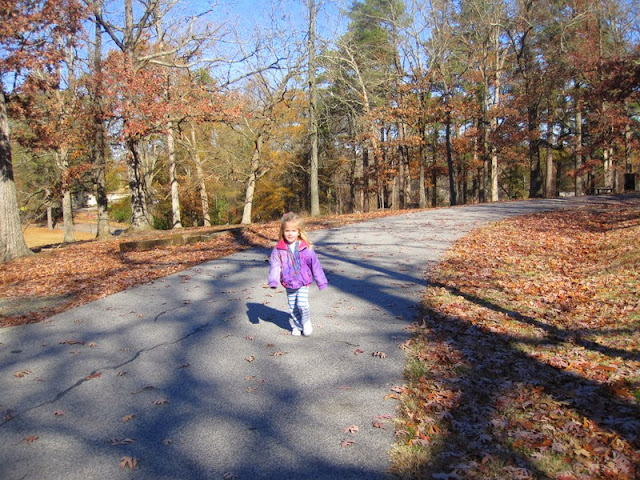 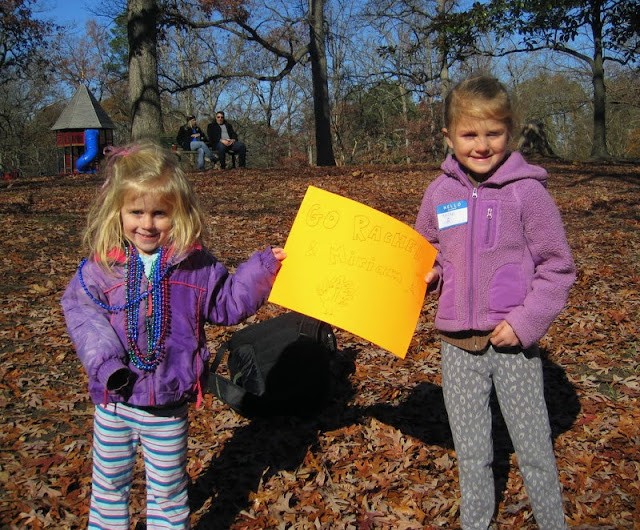 Despite the cold and a few scraped knees, I think they had fun. And scraped knees are small potatoes compared to what happened at the ward Turkey Bowl this morning—one of the men broke his collar bone when he fell down after catching the ball. Of course, that's just hearsay because we weren't actually there.

Justus told us over Thanksgiving dinner. We went to the Adamson's this year. And it was wonderful. Marian was so kind to invite us!

Her dad and stepmom did the turkey and stuffing.
Her cousin and his wife brought sweet potatoes and cranberry sauce.
The Adamsons made potatoes and a salad.
We brought green beans. And a pie. But there were three other pies besides ours.

It was a good meal and I'm incredibly grateful that I don't have to deal with all the leftovers alone because although Thanksgiving is one of his favourite holidays (or at least one that deserves due diligence) Andrew hates the meal.

He used to only eat potatoes and stuffing and pie. After—what are we at now?—nearly eight (right?) years of marriage and a teensy bit of force-feeding (just try it!) he'll also eat cranberry sauce and sweet potatoes. This year he also had plain green beans (I left some just for him—the rest were cooked with onions and mushrooms).

I don't think I'd even consider hosting Thanksgiving dinner—at least not a traditional one—until we have enough people to eat the leftovers. This year we toyed with the idea of doing a Thanksgiving ham but in the end we gladly accepted the invitation from the Adamsons.

Earlier this week, though, I got out one of my fancy bowls that I rarely use so that we could make a salad on Tuesday night. We had company coming and I couldn't find a salad bowl to save my life so I decided just to get it out. What's the point of having it if I never use it, right?

Rachel was over the moon with excitement.

Seeing her get so excited over a bowl kind of made me want to put together a "fancy" family meal, but I think we'll save that for Christmas when we can make whatever we want because neither of our families had a real traditional meal on Christmas (Andrew's family seems to do Mexican food...so that means I can't remember what latkes are for (you know, besides Hanukkah (which, by the way, Happy Hanukkah!))).

After coming home from Thanksgiving dinner we had quite the time settling down and getting ready for bed. Benjamin was quite the distraction with Baby Norah! He loves babies (enough to even say the word (so quite a lot)). 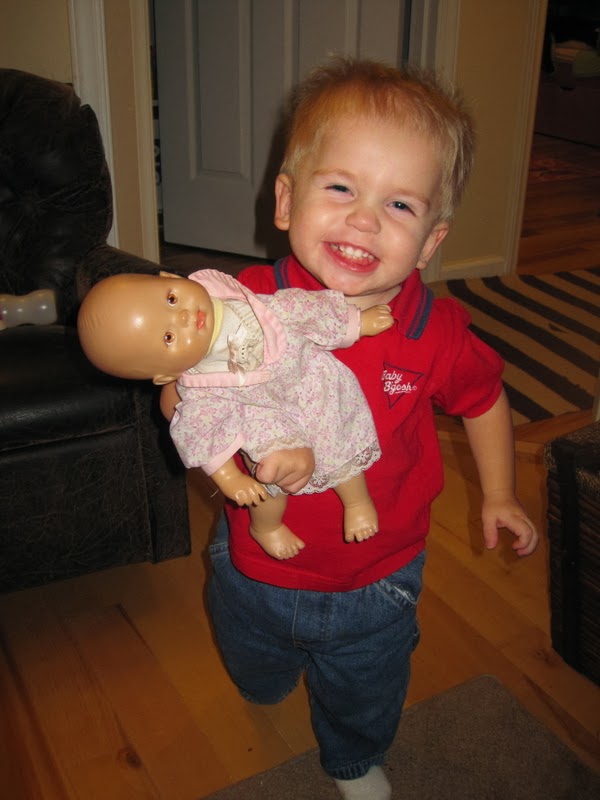 He was absolutely fawning over baby Jay while we were at the Adamsons. 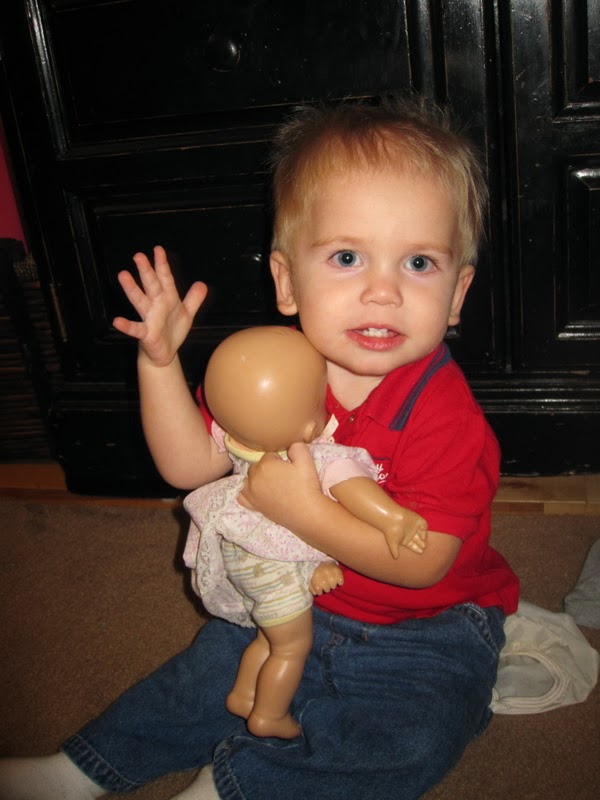 He would stand over the bouncy chair and just stare at Jay, and smile, and wave. Then he'd pat his tummy. Then he'd get ready for a kiss but I'd remind him that we can only kiss the baby's toes. Kissing baby's hands and face is a big no-no. 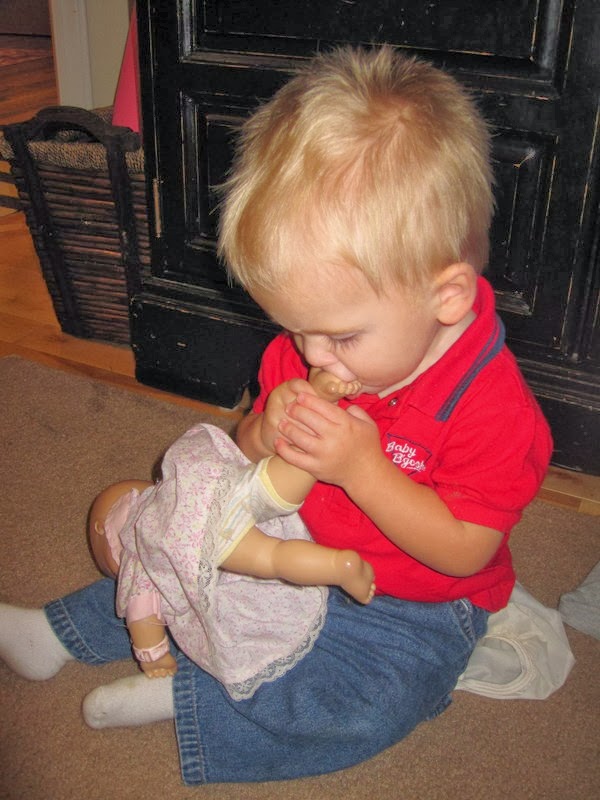 It's a good thing we have so many baby dolls for this boy to love because this little boy has lots of love to share! He's going to be such a good daddy! 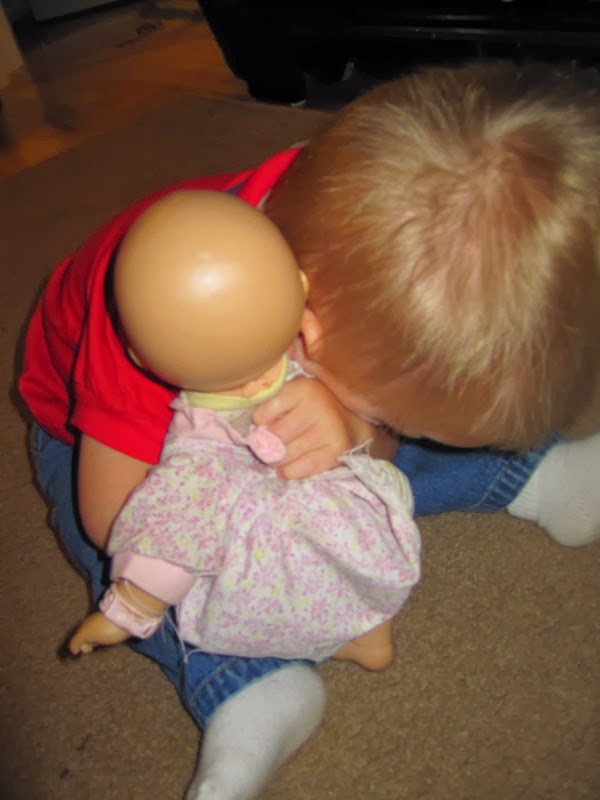