This morning the girls went out to play in the rain. They got soaking wet and impeccably dirty. 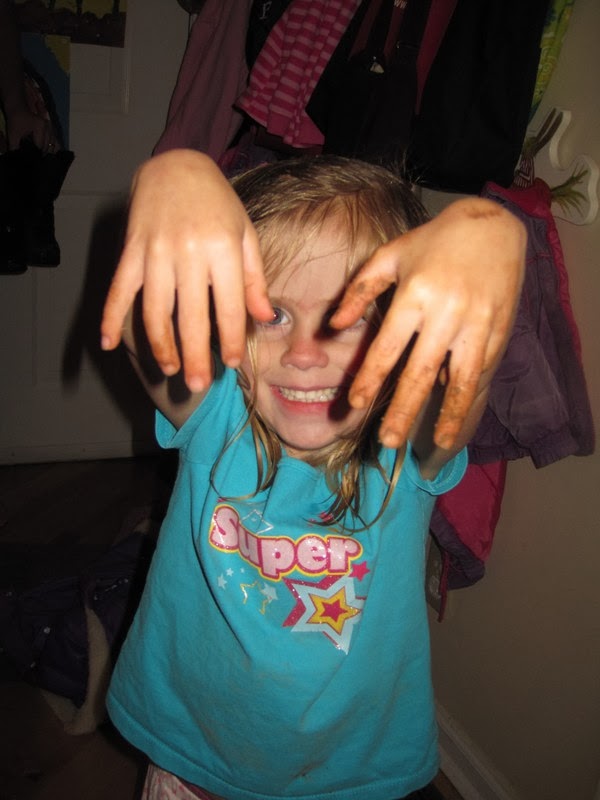 In fact, wasn't I just lauding my laundry efforts because I'd completed everything but a load of darks and a load of diapers? Well now I have a couple of coats to wash as well as some muddy outfits so my work has caught up with me. It's too bad I missed a picture of Rachel before she washed off. She was much messier than Miriam.

They had some hot chocolate to warm up. 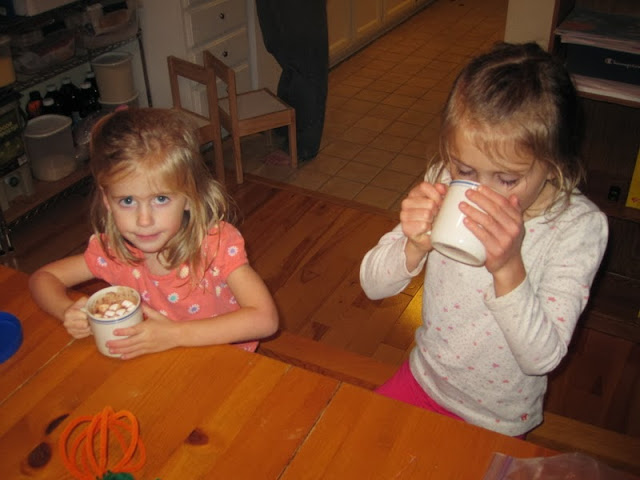 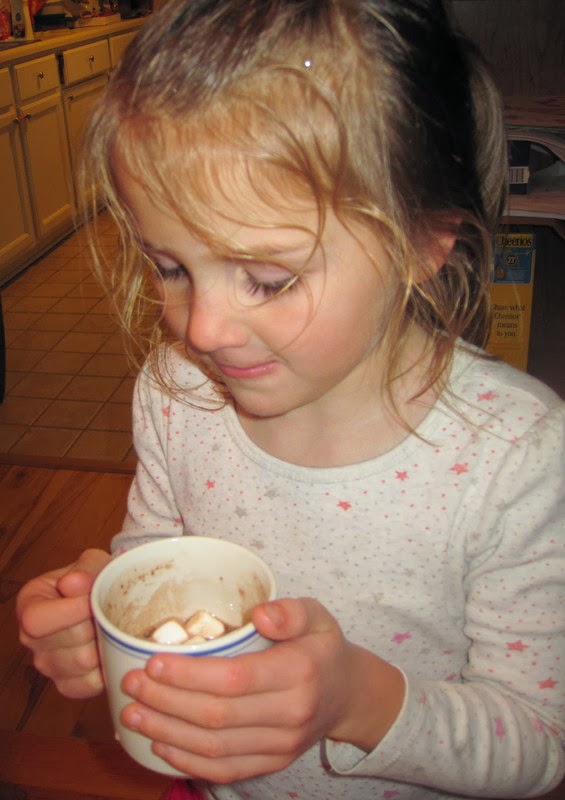 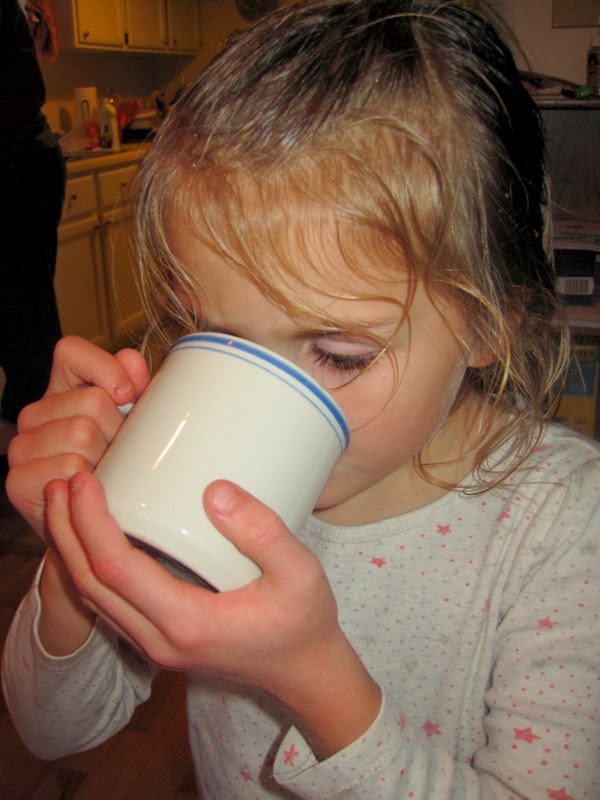 Fast-forward to the end of the day (because all we did in the middle of the day was go grocery shopping (boring!)) and we were once again in the kitchen preparing to have company for dinner (so it's a darn good thing we're not hosting Thanksgiving dinner). Benjamin was being a complete menace. He'd refused to take a nap once again—it's been a battle for a long time, a battle that can only be won by taking a nap with him—and was starting to feel the effects of his poor decision making.

He also wanted a snack. This boy always wants a snack. I'll feed him lunch, then let him nurse, and then he'll pop off my lap and wander over to the snack bins and beg me to give him crackers or something.

This evening, although we had a late lunch, several snacks, and even more nursing sessions, he was determined to get into the cereal before dinner. Unfortunately, he picked a brand new box and got his finger stuck between the flaps. He was very upset about this. His consternation was only magnified when I told him to hang on while I got the camera. 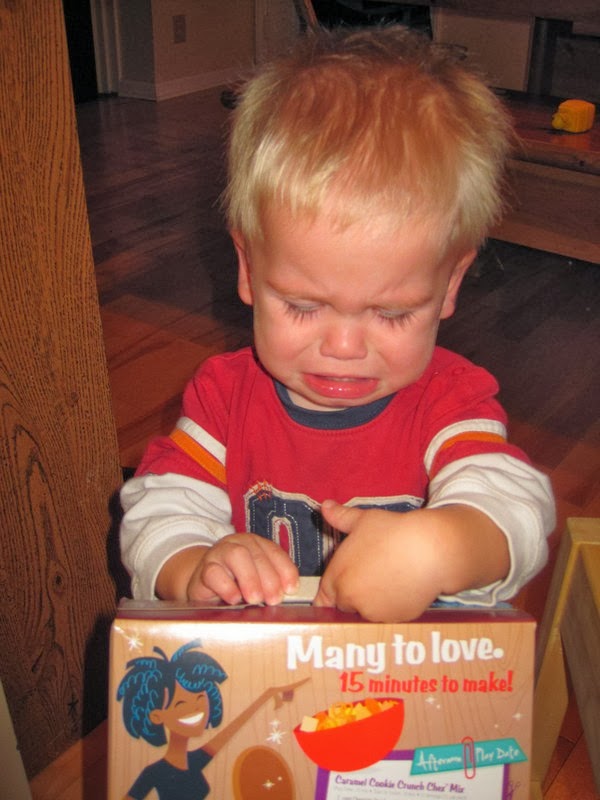 I eventually put him up in his high chair for a bit of an early dinner while Andrew was out picking up the missionaries. He was screaming and whining and getting underfoot. He ate the waffle and banana I gave to him and then, while I was tending to the waffle maker, I heard his plate fall to the floor (a sure sign that he's finished eating). I turned around to check on him and saw this: 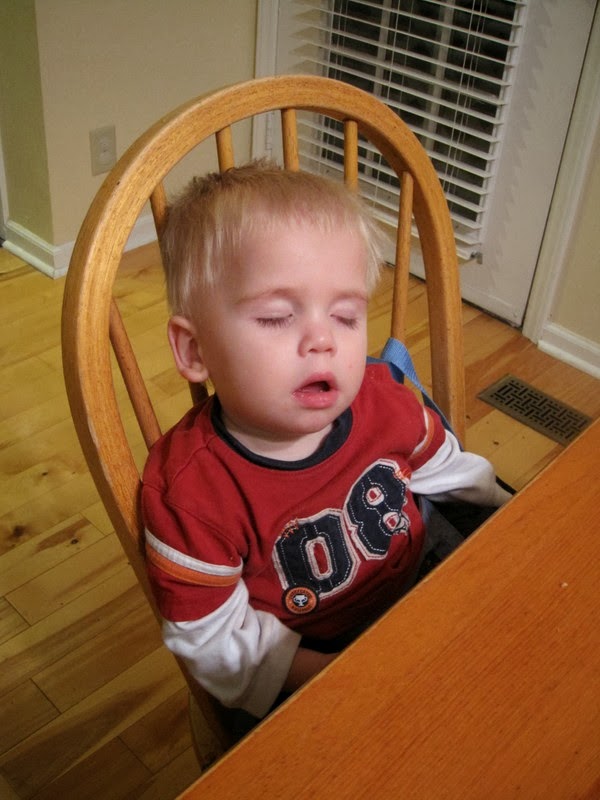 I let him sleep until Daddy came home, which was only ten minutes or so, but which I'm sorely regretting because he's still not sleeping now. I'm letting him spend some time howling in his crib though because I'm going to go insane.

How fair is this?

If I can't get him to fall asleep any other way, perhaps I can just strap him back in his high chair. It's worth a shot. Somehow, though, I don't think that pie is going to make it to the oven...
Posted by Nancy at 9:16 PM

Email ThisBlogThis!Share to TwitterShare to FacebookShare to Pinterest
Labels: home