Now that Rachel rarely brings home paperwork, I rarely see any of her artwork. I must say, however, that the things she's been bringing home are fantastic!

Here's a sunflower she painted (everything else is crayon): 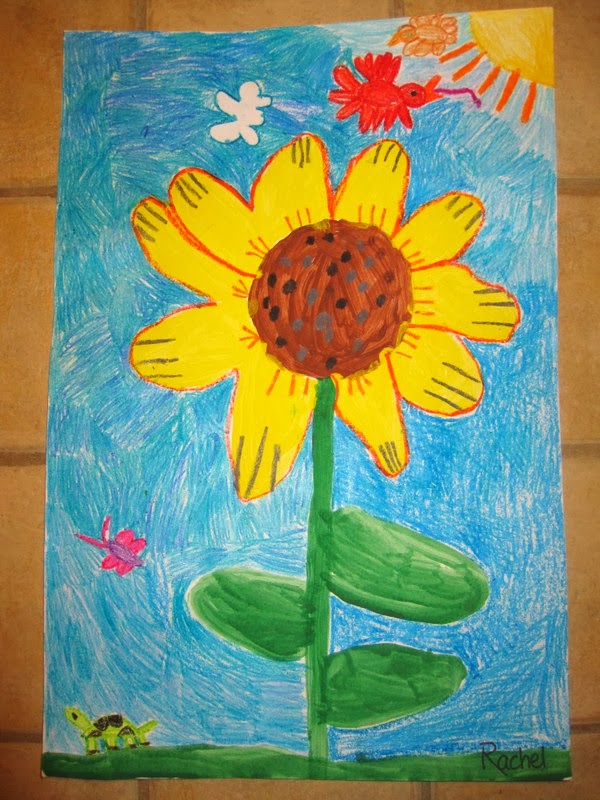 And here's a cow she started (she hasn't quite finished yet): 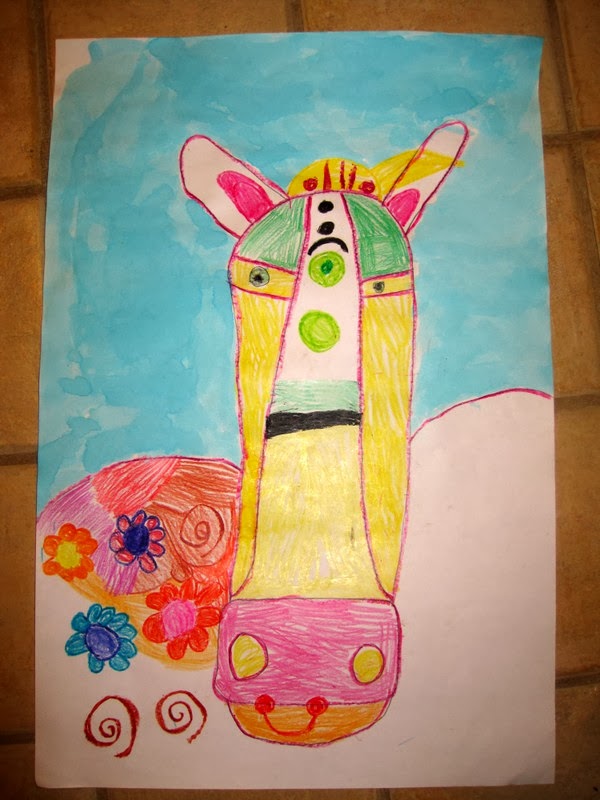 I felt like last year we were drowning in Rachel's artwork but now the tides have shifted and we have an abundance of Miriam's work (since all her paperwork is created at home it all ends up home, too).

Andrew bravely took on the task of clearing off our desks this past weekend, which meant that many (many, many) drawings ended up in the recycling bin. These are a few he saved...

I love the upside down bird. 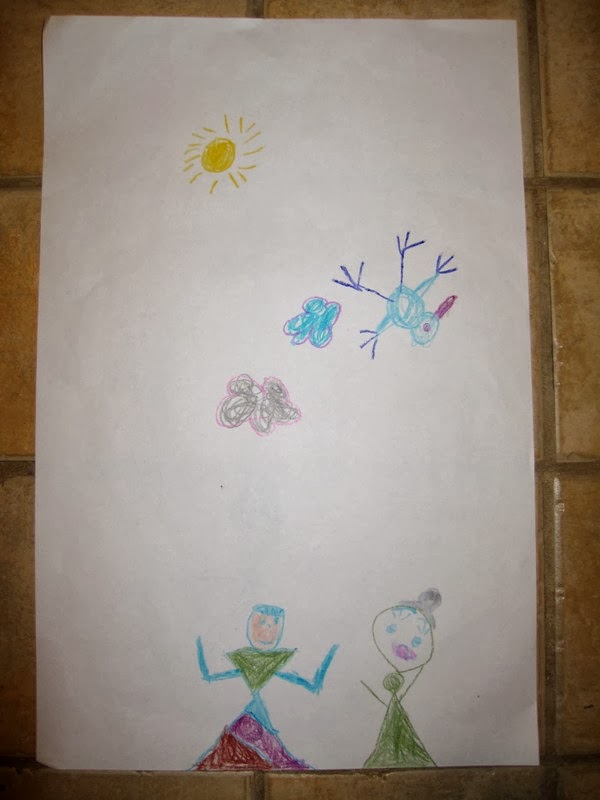 One of Miriam's favourite activities is to draw a picture together (even though sometimes I'd prefer for her to draw alone; it's not that I don't mind spending time with her it's just that I'd rather see what she can come up with rather than have her dictate what I should come up with). She wanted me to draw peacocks (and a few other things). I think this is the first time I'd ever thought to draw a peacock! 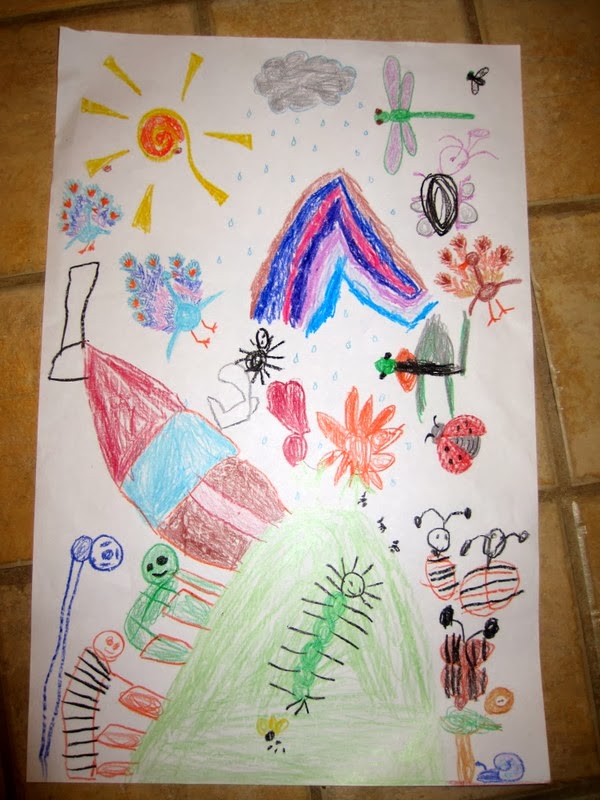 Here's Miriam's copycat version of a peacock (with a zebra): 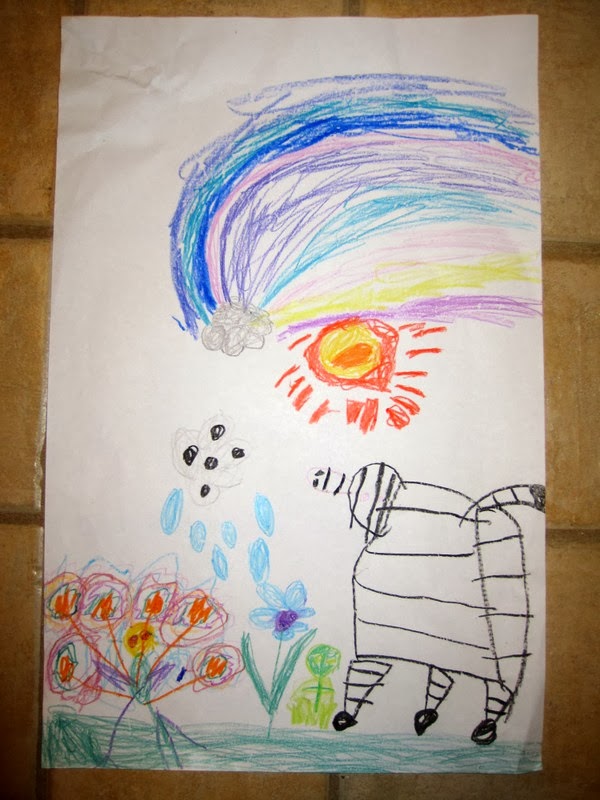 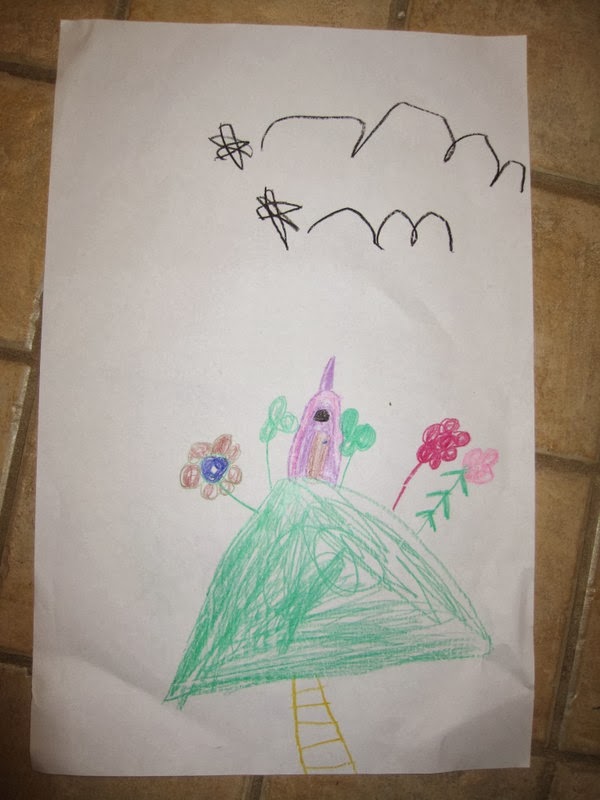 After watching a video about the painting technique Uncle Rod is perfecting right now...

Let Paint Be Paint from chase busath on Vimeo. 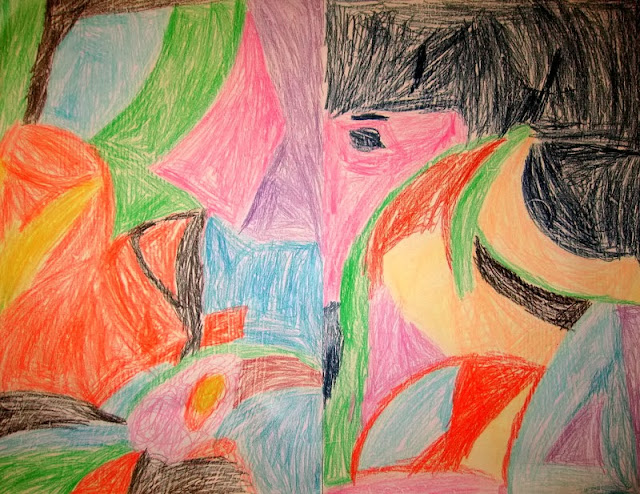 You can see it's quite a bit different from her ordinary fare. Uncle Rod really inspired her to try something new!

This morning she wrote a story, not unlike the one Rachel wrote a couple of weeks ago (inspired by Miriam's reading lessons). It says, The fish ate a cow. A cow ate the dog. The dog ate the cat duck. 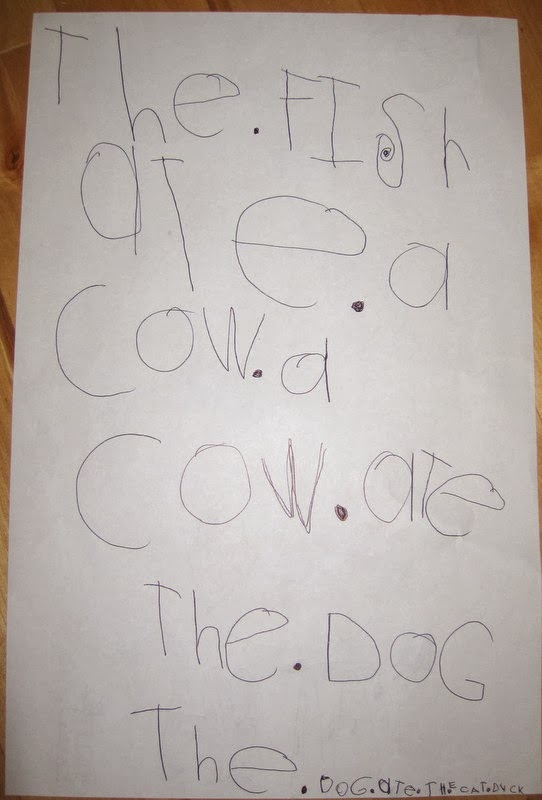 And here is the accompanying illustration: 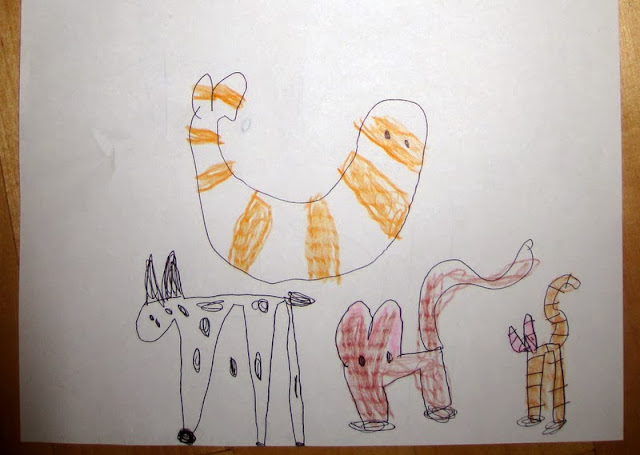 The animal on the far right is a cat-duck (half duck, half cat). The animal in the middle is a dog. The animal at the far left is a cow. Up top is the fish.

In less cute news, Miriam told me at lunch today that one of the boys next door told her that she's not his friend anymore. She on the verge of tears when she told me.

I thought back to yesterday. The kids had been playing in the backyard while I worked in the garden. I could see Rachel and one of the neighbour boys playing a game with a ball but I couldn't see what Miriam was up to. She did, however, suddenly tear past me and ran into the house, refusing to come back outside (though she didn't seem terribly upset at the time). I was about to ask her what had happened yesterday when she broke the silence herself.

"Okay," she said, taking a deep breath. "I'm going to tell the truth." She paused briefly and then blurted out, "I threw rocks at him."

"Well, I think you owe him a better apology than just saying that you're sorry. I think you're going to have to write a letter and deliver it to him in person."

She was mortified to have to write her crime down in ink. But serves her right. 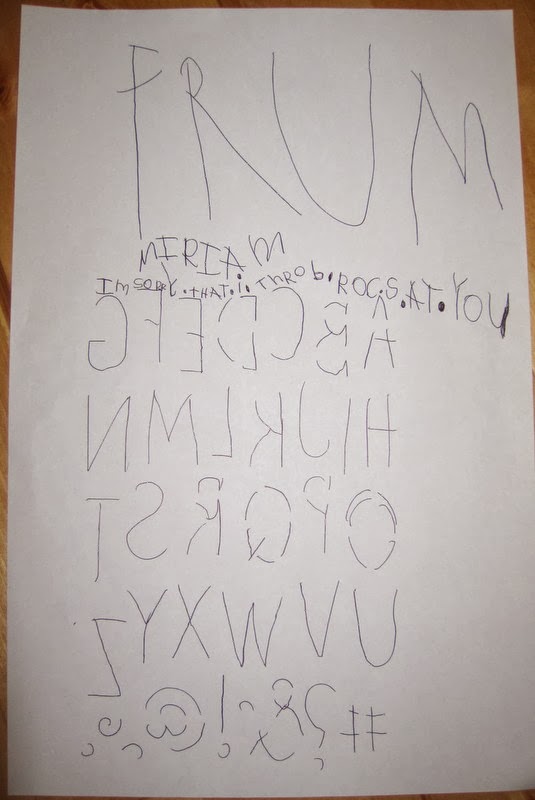 The slightly awkward part about this (you know, aside from the fact that my little girl was throwing rocks at the neighbour boy) is that the neighbour boy has an identical twin brother and so she has no idea which one she threw rocks at. The boys were taking turns mowing their lawn and playing with the girls, so while one was mowing the back yard the other was playing with the girls and then they switched so the previous mower was now playing and the previous player mowed the front lawn.

We couldn't address the letter but I think it was pretty good. It says, "From Miriam. I'm sorry that I throwed rocks at you." And then she traced the alphabet (backwards) using a stencil. So it's a pretty heartfelt note.
Posted by Nancy at 2:24 PM