We woke up in the morning to someone else cooking breakfast, which is always a sign it's going to be a good day. The Harts made a French toast casserole. I totally don't mean to be obsessing about food, but we seriously ate so many good things (because I wasn't the one in charge of cooking; I can only put so much effort into only so many meals per day and/or week so sometimes (at least once a week day our family suffers through not-so-well-planned meals)).

After breakfast we hung out around the cabin waiting for the rain to stop and then had lunch (French dip sandwiches (apparently French food was a trend for the day), which Andrew and I made (mostly Andrew; I cut vegetables though so...)) and got ready to go sledding again. It's one of the cheaper (read: free) things to do on Beech Mountain (read: tourist trap ski resort) so we did it every day.

It was a little colder than Thursday and a thick cloud had settled on the ski hill; it was so thick we could hardly see the top of the hill from the bottom. We (parents standing at the bottom of the hill) seriously could not see the children standing at the top of the hill. We'd be like, "Where's so-and-so?" And then someone would say, "Gee, I dunno. Maybe they went back up the hill." And then we'd wait to see who would come popping out through the cloud. We're lucky we didn't lose anybody (it's a small ski hill).

Here's a picture of someone (Rhett?) crashing on a sled and Callin (for sure) reaching out to...save them? I don't know what he's doing, really. 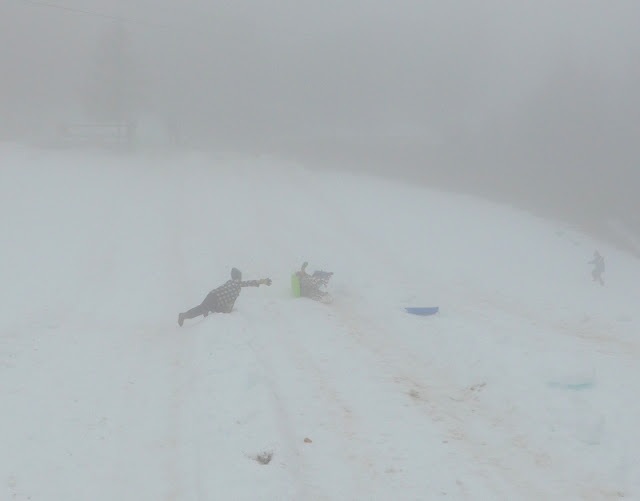 We didn't stay at the hill too long because it was super windy and, due to the morning's rain, rather slushy. We all got cold and wet and decided to either head back to the cabin (for some of us) or to head to Buckeye Recreation Center to play at the playground and go on a little hike (for the rest of us). We were in the hiking group, even though Andrew was starting to feel a little under the weather. He was just tired and sore, but wasn't sure if it was because of sledding and then not sleeping well or if it was because he was getting sick (spoiler: it was because he was getting sick...but sledding may have contributed to his soreness).

He was a good sport, anyway, giving all the kids pushes in the hammock swing and then leading the six older kids on the hike while three adults meandered behind with the four littlest ones (in our defence, one of us (me) had a baby in a front carrier and was dragging a three-year-old along, another was coaxing an unruly four-year-old, and another had a two-year-old in a backpack carrier). It doesn't seem like quite a fair tradeoff when you look at the numbers, but when you look at the capability of the children it begins to make sense.

Here's Zoë enjoying the hammock swing (before I get too far into my description of the hike): 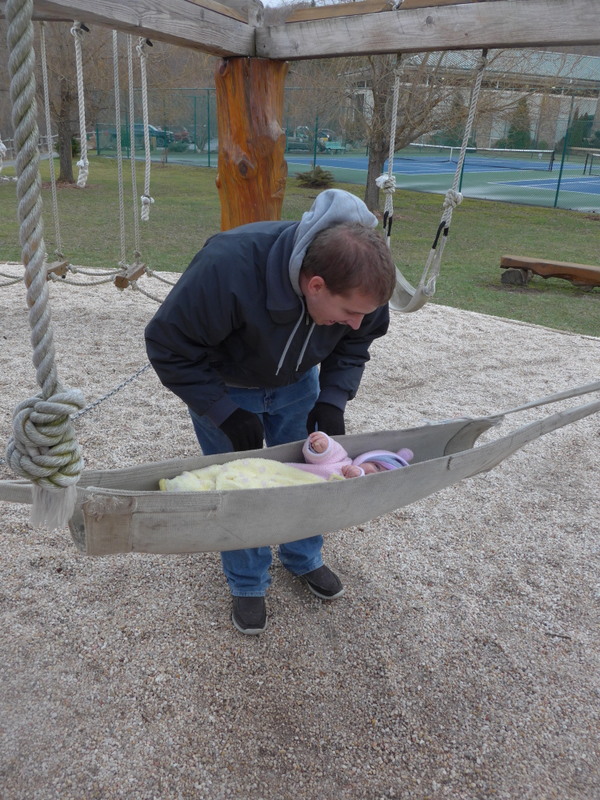 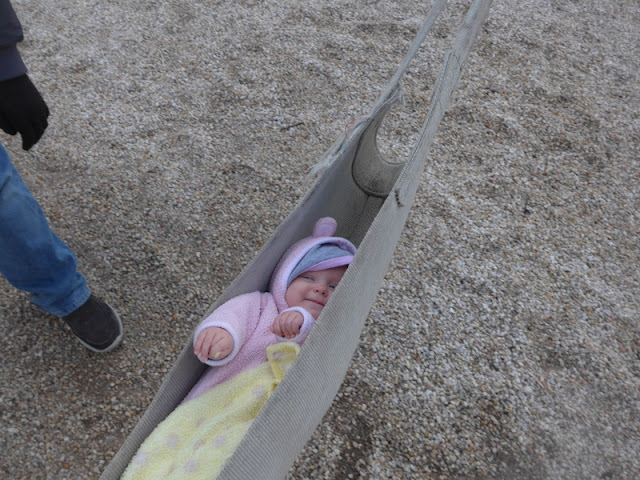 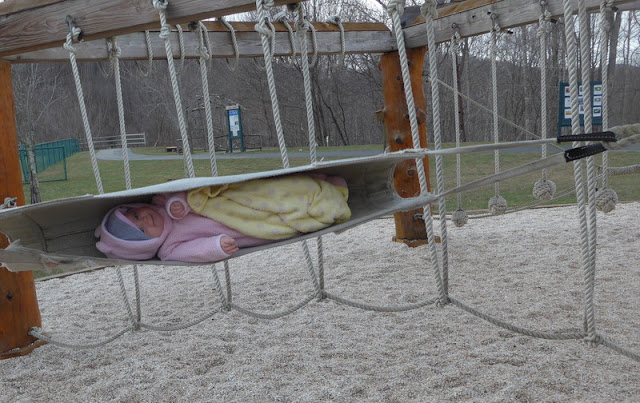 She's not much of a laugher—she smiles big, though, and makes a little, "Hehehe."

The hike was rather muddy, due to the rain, and while we were still deciding what we were doing the six older kids set off running down the path. I'm pro-free-range but also I'm a worry wart—bears, poison ivy, running water, oh, my!—so I dashed off after them the best that I could, with Zoë in the front carrier, tugging Benjamin along, and ordered them to halt. I assigned them each a hiking buddy—Rachel and Callin, Miriam and Faye, Alden and Rhett—told them to (1) make lots of noise, (2) stay with their buddy and on the path, and (3) stay within sight of an adult at all times.

They did a great job following rule #1.

They certainly were a noisy bunch!

Andrew had quite a job, slipping and sliding down the mountain after them. I had my own hands full, carrying Zoë and urging Benjamin along. He only tumbled once—he went head over heels, of course, because that's the only way he ever falls. So this is the second time he's made this hike and the second time he's landed on his head because of it.

He was just fine though! Here he is by the waterfall (with his buddy Rhett): 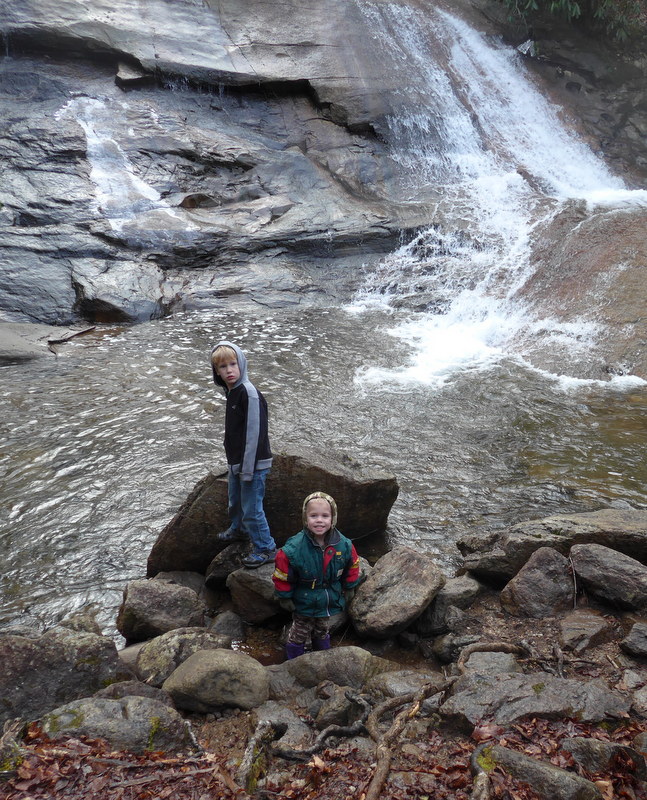 And here's Zoë and me: 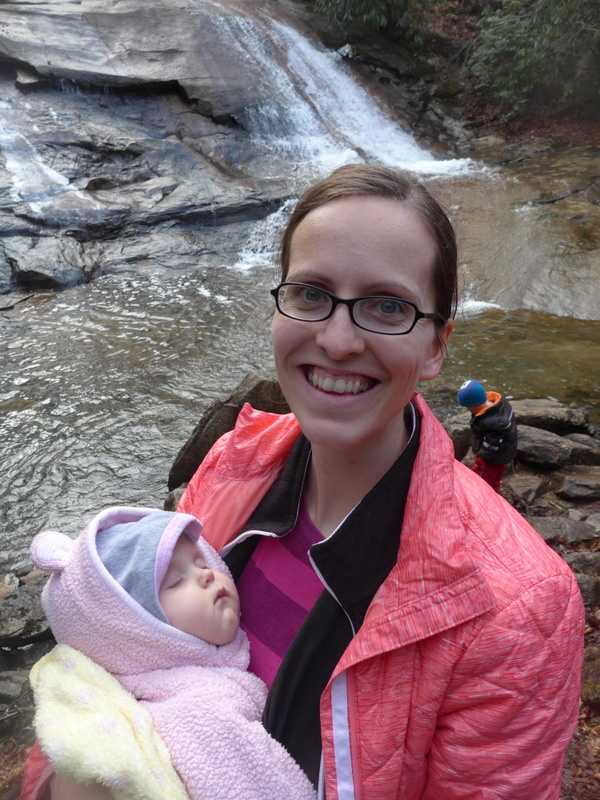 The kids were being so crazy by that water. They were splashing around in it—Callin got so much water in his rain boots that he had to take them off and dump the water out—and there was ice in it and everything! Poor Faye (whose parents entrusted us with her safety) slipped as she was scrambling on a rock and fell right into the creek, completely drenching herself.

Marian and I made some quick winter-gear rearrangements and Faye ended up hiking back up the mountain wearing Miriam's zip-up sweater (in lieu of her shirt) and Marian's coat (in lieu of her own). There wasn't much we could do about her pants and socks and boots though, so she had to wear her wet ones.

I didn't pack nearly enough sweaters and things for the children (I thought they'd do fine with one each even though I packed several for myself (I'm a sweater-loving person)) and the kids got nearly everything I'd brought along wet while sledding earlier in the afternoon. I packed along all my extra warm things just in case, including my pyjama top (which Miriam ended up wearing). 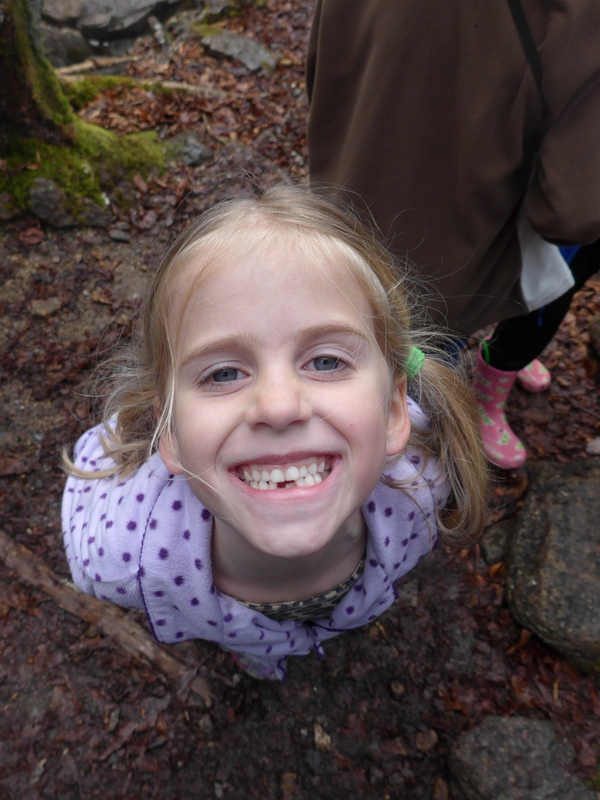 We arrived to the wonderful aroma of warm dinner cooking in the cabin—a nacho bar for dinner (straying from our French theme)—but still had time to get everyone in warm and dry clothes (and play a few games) before it was time to eat. 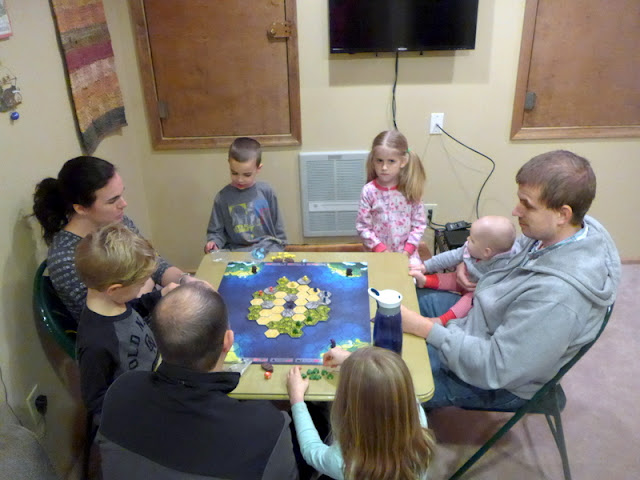 The kids settled down (kind of) to watch Epic in the evening, but with fifteen children you can probably imagine how "settled down" that really was. Kids were still running all over the place.

At one point Annie went up to get ready for bed—she shooed all the three-year-olds out of her room (they'd been playing in the loft her boys were sleeping in) so that she could put Elliot down and then closed the door so she could get changed.

The cabin filled with agonized screams and I (and I assume everyone else) started scanning the room, doing a head count to see who was missing, who was screaming.

"That's my little buddy!" I yelped, jumping up and running upstairs.

About the same time I realized it was Benjamin screaming, Annie opened her door and found, much to her dismay, Benjamin crumpled up on the carpet at the top of the stairs, sobbing. He'd grabbed the door frame to steady himself as he began to descend the stairs and she'd slammed the door on his fingers. Two of his fingers got crunched.

She took Zoë from me so that I could cuddle Benjamin (Andrew had gone to bed early, officially declaring himself sick; and Annie's arms were free since she'd just put Elliot down (and he somehow slept through Benjamin's screams, I guess)). His fingers looked pretty bad that night, but after running them under cold water, bandaging them up, icing them for several minutes, and putting them to bed, they looked much better in the morning.

He wanted to take his bandaids off so bad, but I hadn't packed any (I had to borrow take some from Jana) so I asked him to leave them on until we got home. In the car he kept saying, "Do my fingers feel better yet, Mom?" and I kept saying, "You're a better judge of that than I am."

Finally he ripped the bandaids off and declared, "They do feel better, Mom!"

My kids are notorious bandaid haters. Bandaids are a symbol of pain.

We go through a lot of bandaids (with the newer iterations of our offspring (Rachel wouldn't even let us put a bandaid on when she was little; she'd die first!)) but none of them stay on anyone's skin for very long.

Anyway, that second night at the cabin was the biggest joke. I think there was a child up for every painful second of the night. Someone was always crying. It was ridiculous, but again, with fifteen small children...what did we expect?
Posted by Nancy at 11:05 PM