Miriam is nine! (She's so nice we celebrated twice)

Miriam turned nine on Thursday. I for one would like to know how she managed that. How did my sweet little baby turn into such a lovely half-grown little lady? I honestly cannot fathom it. Her babyhood is so fresh in my mind that it's sometimes shocking that she's a living, breathing nine-year-old.

I loved all my babies, but her babyhood is much more vivid in my mind than other memories. Perhaps because she was born at such a precious time in our lives. Egypt will never be far from our hearts. We still cherish the friendships forged there and often recall the adventures (and misadventures) we went on and the lessons we learned. We did a lot of growing and stretching in Egypt.

Once you drink from the Nile, the saying goes, you will always return.

Though we've yet to return physically, we frequently dip into our memories.

Miriam doesn't remember anything about her birthplace at all, but she is rather fascinated with ancient Egypt and requested a pyramid cake for her birthday this year. 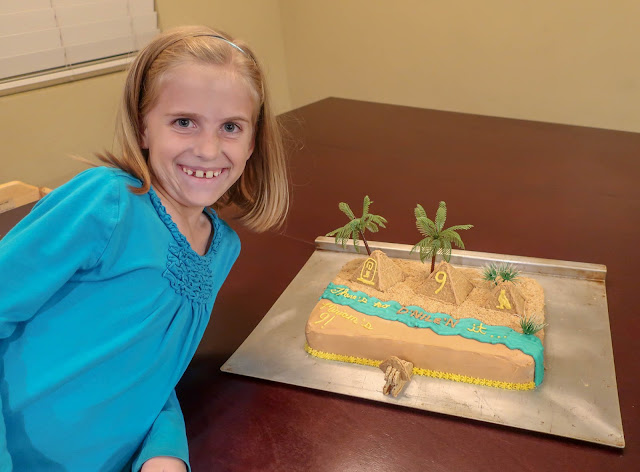 I hardly saw her the morning of her birthday because she had an extracurricular activity scheduled for that morning so she left the house early with Daddy. And then when she got home we raced off to BYU for organ and gamelan (which I'm doing again all of a sudden). We did get to chat a little in the van.

Miriam is such a sweet girl and always wants everyone to feel happy. To that end, she drew a Halloween picture for every single person in her school class (and taped a candy to each one) to hand out for her birthday treat (because she knows this momma doesn't send birthday treats to school). She also made "pet clouds" for the kids in her organ class so she could hand them some happiness as well.

She has such a knack for learning details about people and presenting them with the perfect gift or card for special occasions but when it comes to getting gifts, herself, she's absolutely gracious.

This is perhaps due in part to having a mother who is abysmal at giving gifts.

When I asked Miriam what she wanted for her birthday she looked at me, stunned, and said, "You mean I get to...choose?"

"Well, you can make requests," I said.

I have been blessed, so far, with children who have very low expectations when it comes to receiving gifts. Nurture? Nature? I don't know (but it's awesome). We gave her Lego for her birthday this year.

A small set for herself: 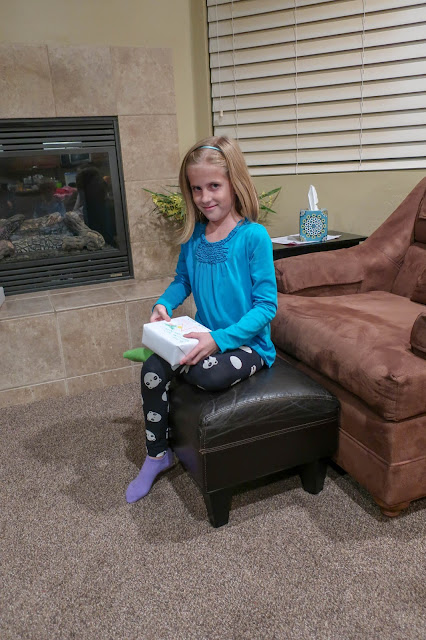 And a big set to share with her siblings: 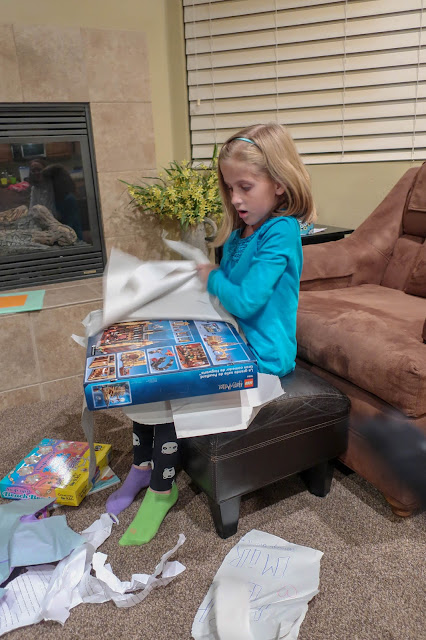 Rachel and Miriam have been talking about pooling their piggy banks to spring for a new Harry Potter set, so we went ahead and splurged for them (hoping that it would give them hours of joy as they pieced it together but instead they've been fighting about whose organizational system is superior so maybe we'll just take it away). All three of the big kids were rather excited when Miriam revealed what was in the big box. 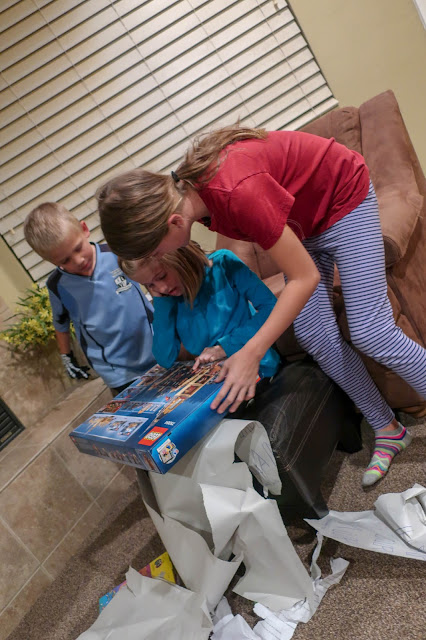 She also got a shell necklace kit and an origami book from Naanii and Bumpa, which she's rather excited about.

Our party was rather small this year and I was so exhausted that I hardly took any pictures! My mom came and Grandma was there. Other than the kids and me, that was it! Daddy was at work and Grandpa was at a church meeting. It was a very low-key evening.

Here are a few pictures of Miriam's cake, however: 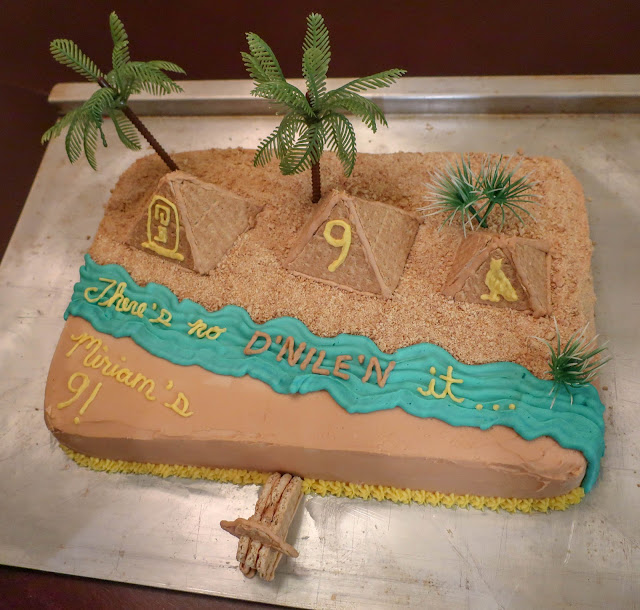 I'm still pleased with myself over the "there's no D'NILE'N it" pun.

And, I made a graham cracker sphynx: 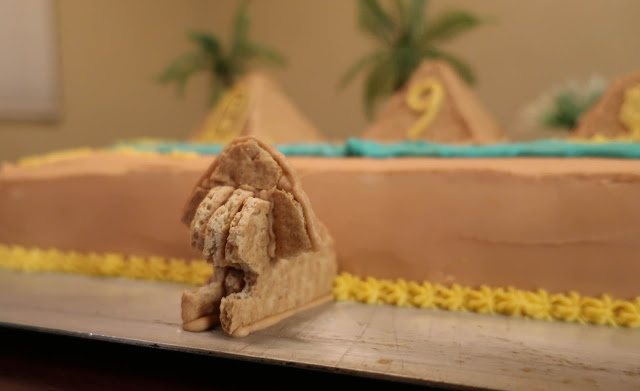 She'd been hoping for a cake shaped like a pyramid, but I honestly didn't have time to pull something like that off. So this is what she got instead and she was happy with it. 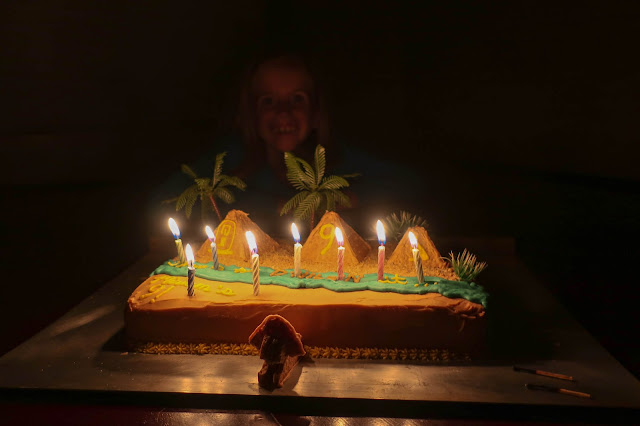 Baking her cake was a bit of a disaster.

After dropping Zoë off at preschool on Wednesday morning I thought I'd come home and whip up a cake for Miriam (and by "whip up a cake," I mean that I used a cake mix). So, that's what I did. I preset the oven, I prepared my pan, I cracked in my eggs and added the oil and water, then I mixed it up, poured it in the pan, picked up Alexander so he couldn't climb into the oven, opened the oven door and, balancing Alexander as far away from the heat source as possible, I leaned over to place the cake in the oven.

I was dismayed, however, to find the oven hadn't ever turned on.

I was up a cake without an oven, so to speak. I put the cake on the counter, hemmed and hawed, mulled over who might be home during the day, and made a few phone calls. Our cake soon ended up in the bishop's oven (we're so grateful their family was willing to contribute to Miriam's birthday). Sister C set a timer for the cake and promised to not let it burn while I wen to pick Zoë up from preschool, then Zoë and I went back over to the bishop's house to fetch our cake.

Grandma, meanwhile, knew that she had some cake-baking in her future so she called around to various stores and finally found one that carried the element our stove needs. She ran to Orem to pick it up and got the oven back into commission. Installing that element was trickier than I thought it was going to be (the old element was stuck fast to the connector node thingies). Usually when I take things apart and am able to put them together again I feel empowered. Fixing the oven element just made me feel confused and nervous.

The oven has yet to explode so I guess I connected everything correctly.

While I was in there, with no bottom element, I decided to give the oven a good scrub down.

"Why?" Rachel asked when I mentioned this to Andrew.

"It was easier to do because there was no element in there," I said.

Then Andrew and I said at the exact same time, "...except the element of surprise!"

It's nice to know we all have the same terrible sense of humour. 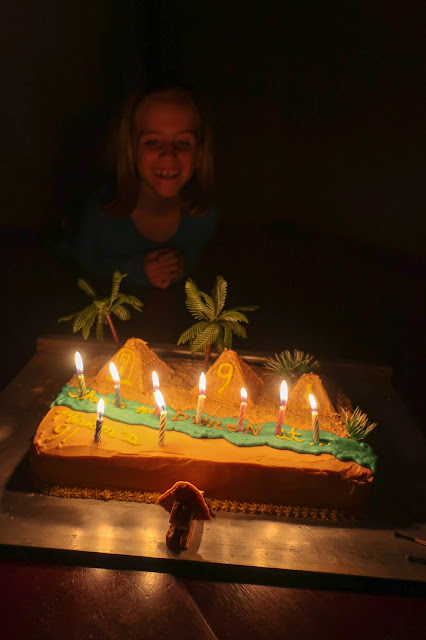 Zoë was very excited to eat a piece of the Nile (since she's never been to Egypt). 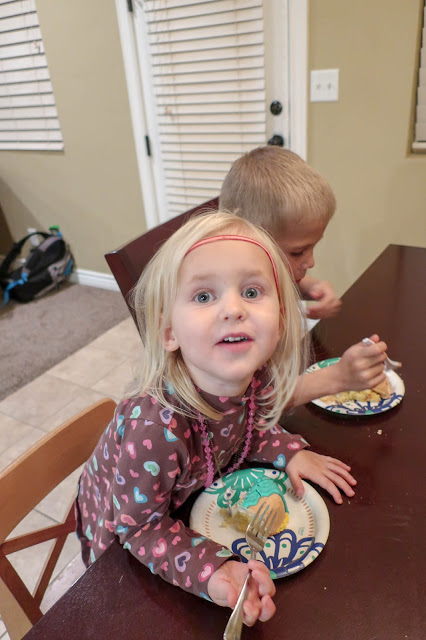 On Saturday the 27th we had a triple celebration for Kayl and Carter (who share a birthday on the 28th) and Miriam (whose birthday was on the 25th). Karen made a fantastic birthday cake for the three of them, with three different flavours and an individual theme for each child. Carter's cake was spice cake with apple filling topped with London decorations (Jacob, Shayla, and Carter just got back from London), Miriam's was a white cake with raspberry filling topped with piano decoration, and Kayl's cake was lemon with lemon filling, topped with a superhero theme. 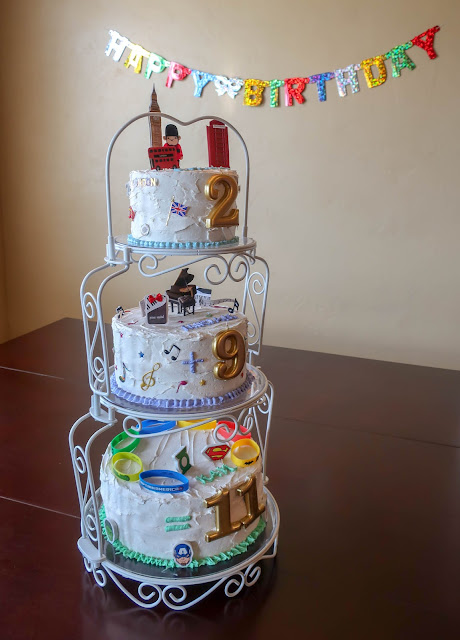 This year their ages made a cute, tidy math equation. Carter turned 2, Miriam turned 9, and Kayl turned 11, so it was the perfect year to throw a shindig like this (Karen says she's never doing it again and I don't blame her because that cake was a whole lot of work)! 2+9=11 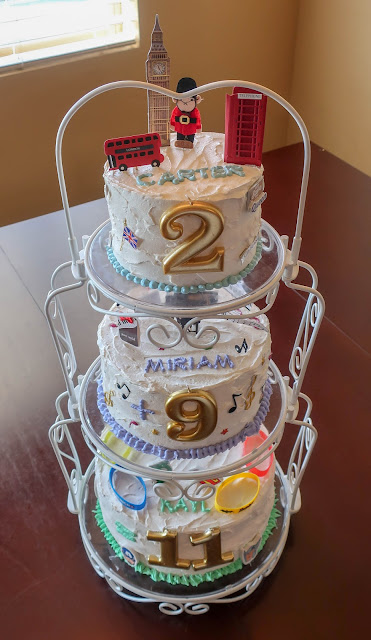 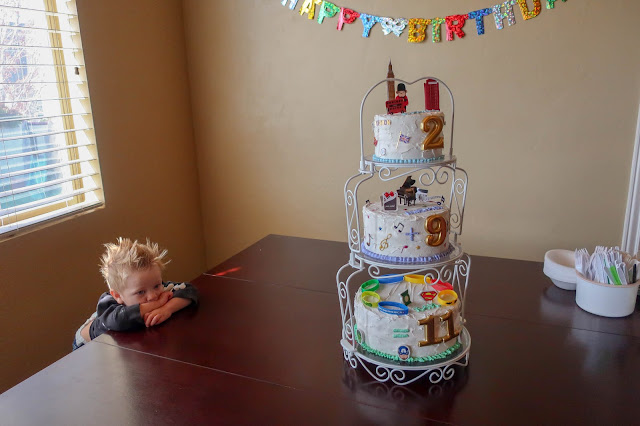 And here are the three birthday kids all together: 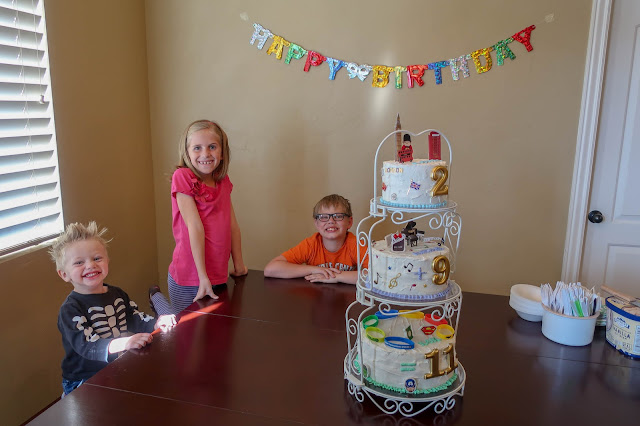 And here's Grandma lighting the candles on her masterpiece: 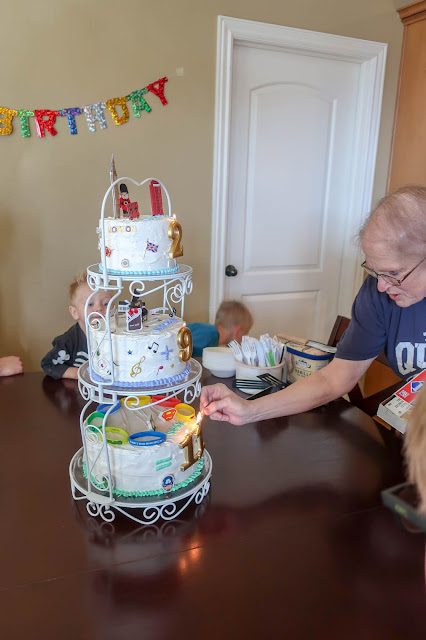 And here's the singing of the birthday song before blowing out the candles: 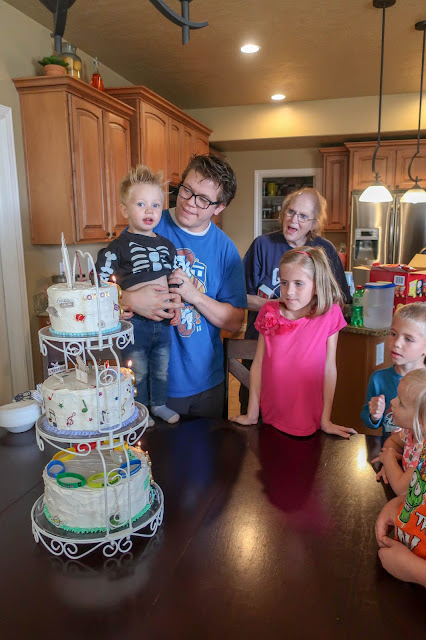 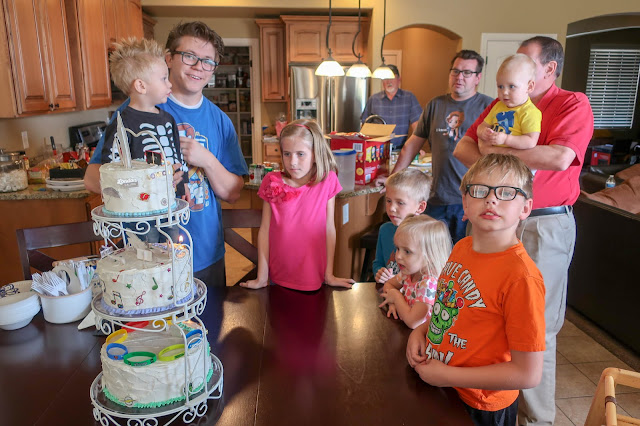 Oh, I forgot to mention how much Alexander likes cake.

As the fifth child, he did not remain sugar-free until his first birthday. He's had plenty of tastes of cookies and little bites of cake and ice cream. Everyone wants to share with him, always, and he's more than happy to oblige. But the first time we ever just handed him a piece of cake was on his birthday and he loved it.

Miriam insisted on cutting and serving her own birthday cake on Thursday, so I let her because I actually don't like cutting cake (I never know how to do it). However, she still wanted to have the piece of honour—the first piece—so she said she was going to cut a piece for everyone but that they would have to wait to eat until she had served herself (which would be last since she was doing the serving).

Alexander, however, recognized cake and was not on board with patiently watching Miriam cut and serve cake to everyone before eating. He started squawking about it, rather enthusiastically. He was kicking his legs, pounding the table, and hollering at the top of his lungs.

My sister Josie said that Alexander is Jack Jack (from The Incredibles) and she's not wrong. He was turning into "devil" Jack while he "waited" for his cake.

(Watch the first 23 seconds of this clip to see devil Alex Jack):

I had to scream over his screaming for Miriam to hear me.

She slid him a sliver of cake on a plate and he immediately set to work devouring it. The silence was beautiful. I know Ander will need to learn to be patient but I'm not sure that prolonging cake delivery is the best method for doing that (at least not at this age).

We served him early at Saturday's party to avoid the tantrum. He loved the cake. 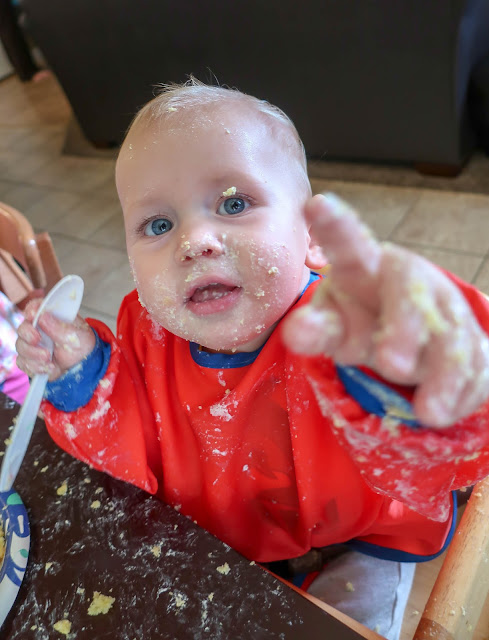 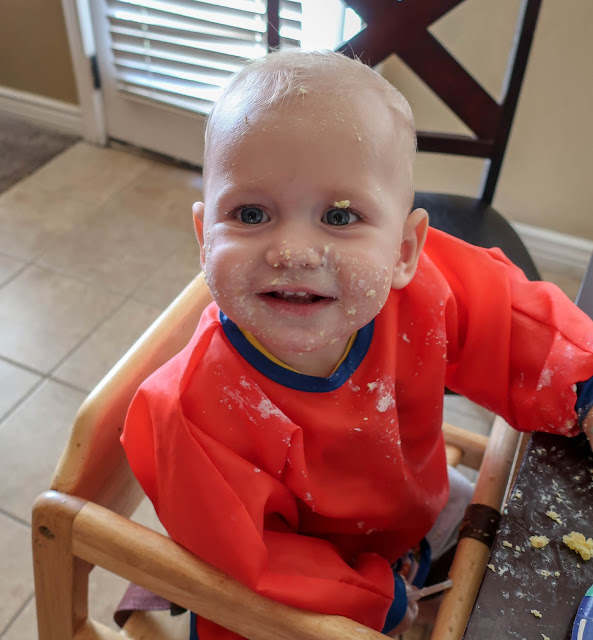 And now we don't have to have cake for a million years because we have cake coming out our ears (for some of us, such as Alexander) this is meant literally).

Happy birthday to Miriam!
Posted by Nancy at 1:28 PM