Yesterday was a pretty great day because in addition to it being Benjamin's birthday, I also got cleared from jury duty, and we got to take our very first firefly walk of the season! I think the kids caught more than a dozen before we headed inside (they're still fairly sparse, but I'm sure there will be more soon).

Here's Benjamin showing off the firefly jar (from yesterday; they were out there again this evening): 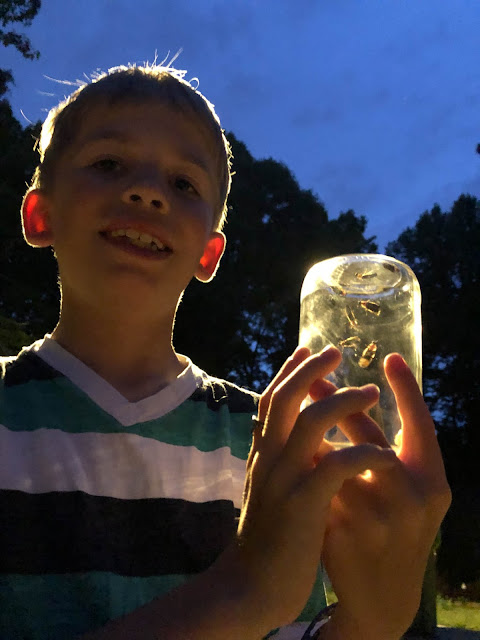 And here they are flashing their little lights as we released them: 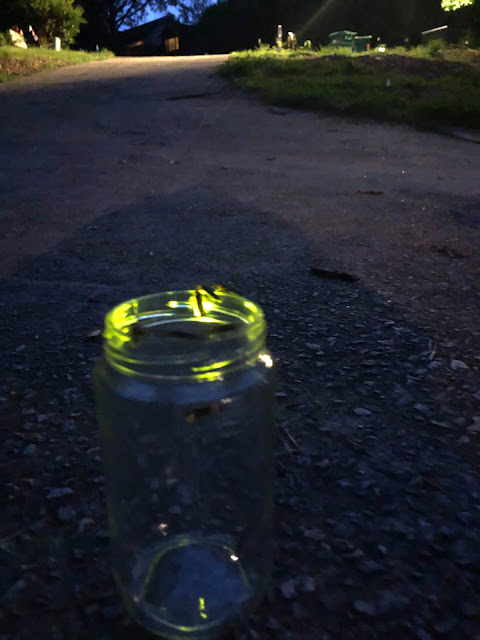 Last year Alexander was obsessed with "firefly sunset walks," but after nearly a year of nothing but the memory of fireflies, Alexander struggled to remember what they were all about. He certainly remembered running around and catching them, and he remembered how they make flashes of light as they fly about...but he couldn't remember what they were called exactly.
He kept talking about "thunder bugs," which I suppose means he really picked up on the southern word for fireflies, which is "lightning bugs." He just...picked a word he associated with lightning instead of the word lightning itself.
We've had an infestation of box elder bugs in our front yard this spring, which Zoë and Alexander got really excited about because they mistook them for fireflies. They do look fairly similar, but they sure weren't happy when I told them that what they were holding were not, in fact, fireflies (though why they should be so picky, I don't know, because they'd already discovered that box elder bugs are pretty harmless).
Anyway, we're glad firefly season is here. We'll likely have a string of late bedtimes until it's over!
Posted by Nancy at 11:48 PM