We all got out of the house for a little adventure this afternoon. It was like pulling teeth, but we did it! I wanted to do it yesterday but Andrew had put off a project with a deadline of May 31 (which he didn't realize was Memorial Day), and then Rachel had to work this morning and when she came home she immediately started baking Benjamin's birthday cake (which I appreciate) so we had to let her finish that (even though it put us a couple of hours "behind schedule," so to speak (we keep a rather flimsy schedule around here)).

Andrew suggested we could go another day, but I knew Wednesday wouldn't work since that's our busiest weekday, and I honestly don't know whether or not I'll have free time any given day this week (because I'm on call all week). But I did know that I didn't have jury duty today, and that's something, so we headed out.

I had seen a few friends post about Freeman's Mill Park and wanted to check it out for ourselves as a little local adventure (we honestly haven't gone on an adventure in ages). The park is about a half hour away from our house (longer with traffic, of course), and was surprisingly empty (given how crowded the parks closer to our house typically are). 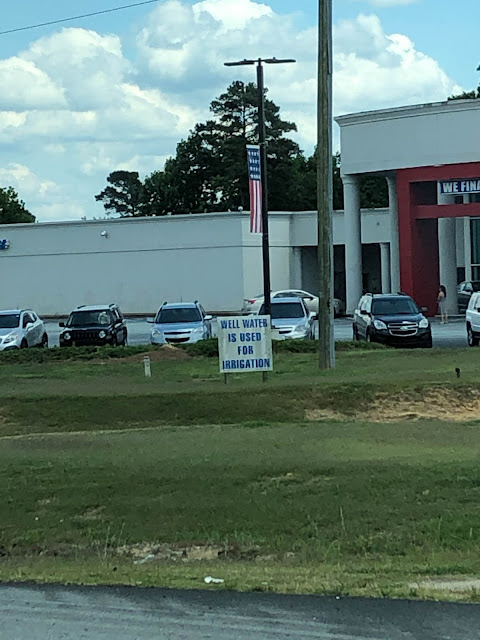 And then when we got to the park, the kids saw this sign on what Benjamin pointed out is more of a fence than a wall that says "Please stay off wall" and they said, "I guess we have to be silly the whole time we're here!" then bounced around asking, "Is this off the wall enough for them?" 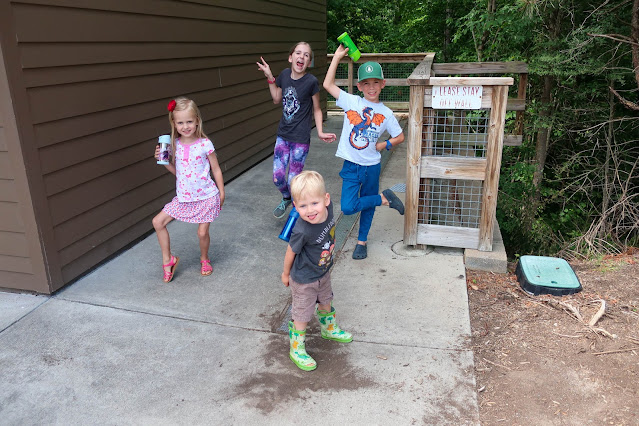 Later I saw a sign at the park (though I didn't take a picture) that said, "Under 24 hour surveillance" and wondered aloud what they do with the remaining hours of the day (shouldn't it be equal to 24 hour surveillance?).
We're just all so witty.
Anyway, it's a cute little park. They have a fun playground designed to look like a mill, complete with a water wheel: 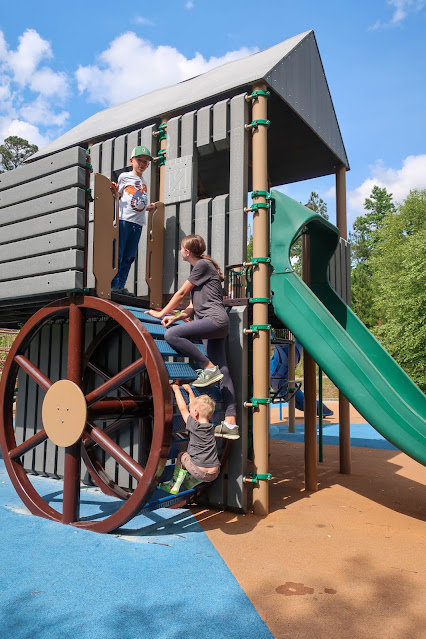 Poor Alexander couldn't figure out how to climb up the water wheel (but there were many other ways to get up to the slide, so he was just fine): 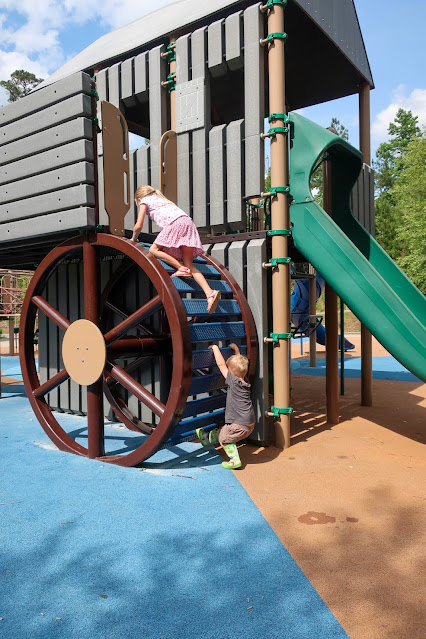 There's also a historic mill at the park. I'm not sure if the mill is quite in working order yet (like the mill at West Point on the Eno), but I think that's the plan for it. We did see a sign that tours would be available in August, though Andrew noted there was no year on the sign, so...who knows when and if those tours will actually happen. 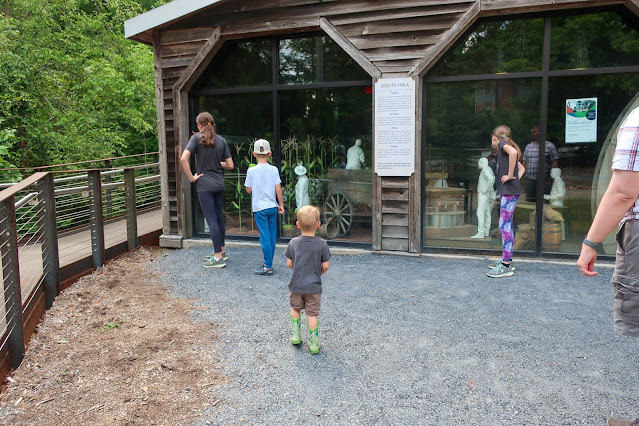 We did get to peek at a few of the exhibits through the windows at the front of the mill (as well as at the mechanics of the mill from behind the fences). 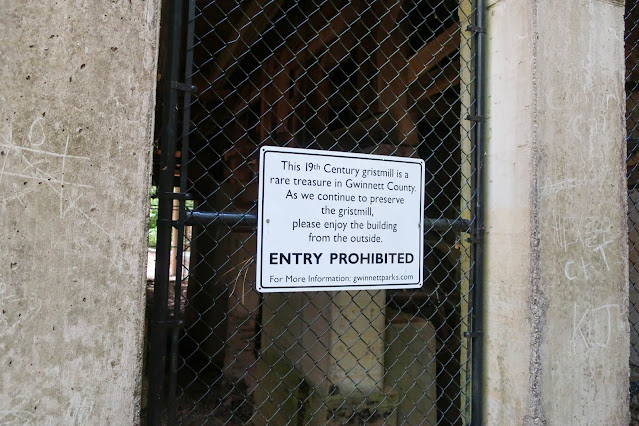 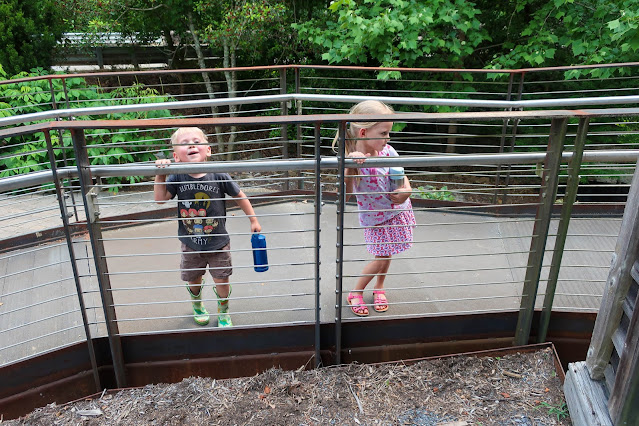 Here's Alexander fleeing from the millstone. He had been looking at it and then turned all cute and asked me to take his picture and then noticed that his siblings had all moved on and decided he'd rather not be left behind... 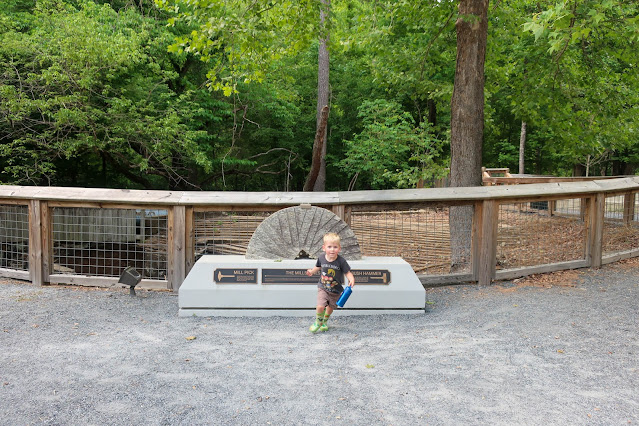 Here's everybody (but me) down by the Alcovy river/dam: 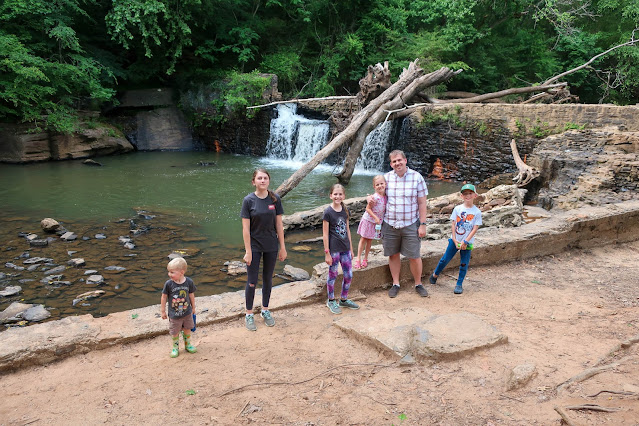 And here's me (because I also exist): 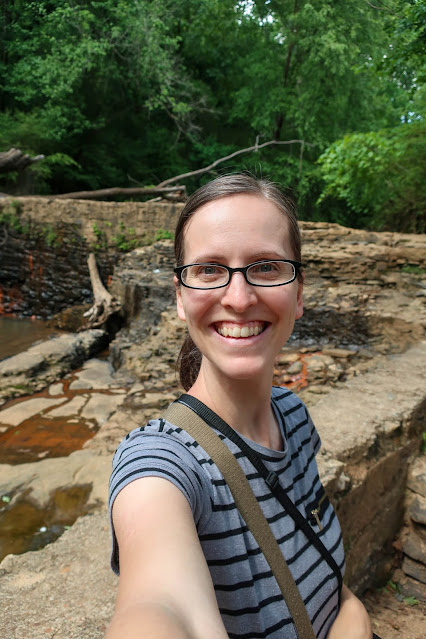 It's a really pretty area: 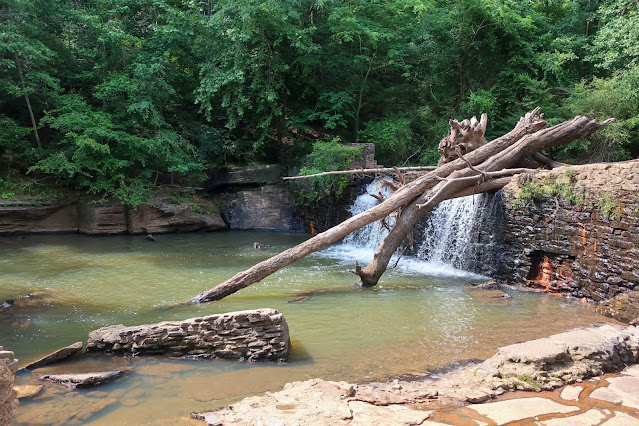 We honestly will have to go back for more of a day trip. There's another park, McDaniel Farm that has a working farm of sorts and one suggested itinerary I've seen is to hit up the farm (where they'd grow the corn) and then visit the gristmill (where they'd grind the corn). I can't believe we've lived here so long without ever going anywhere but...that's...what happened. So...

Here's everyone checking out the dam (which was built between between 1868 and 1879, as was the mill): 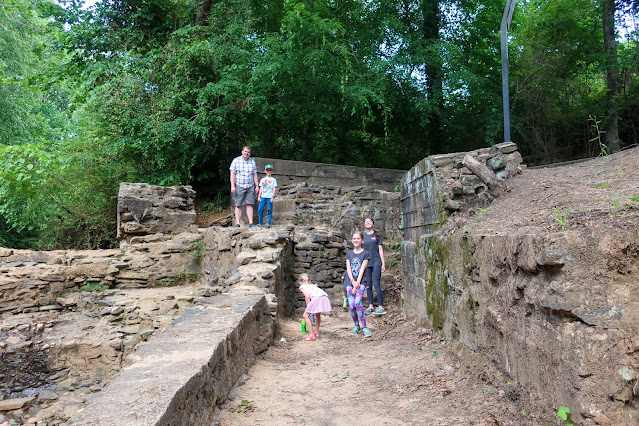 And here's Alexander scrambling after his siblings once again when he realized they'd left him behind...again: 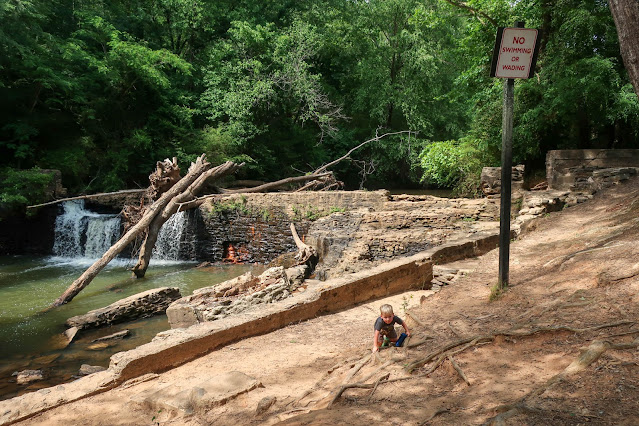 They wanted to explore the waterwheel and other gristmill trappings: 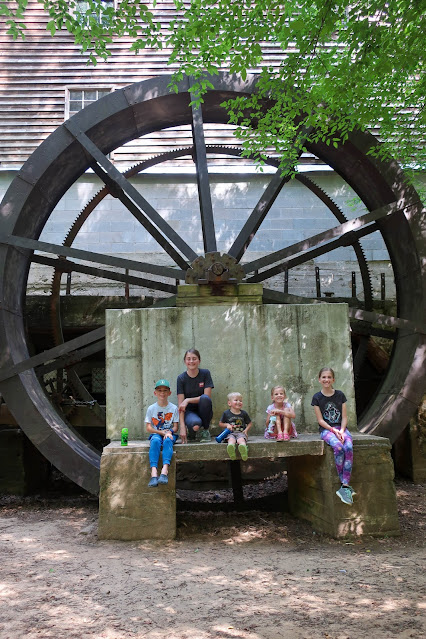 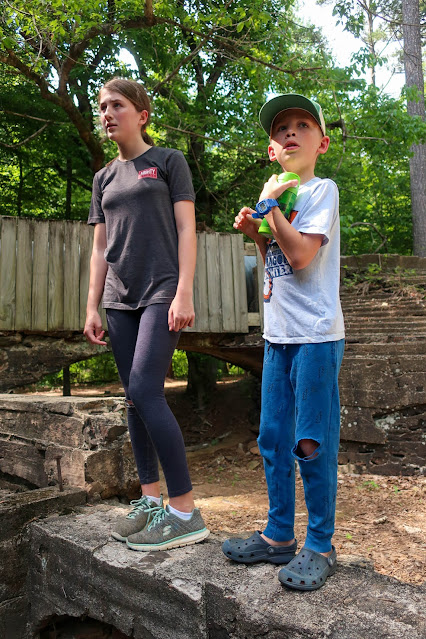 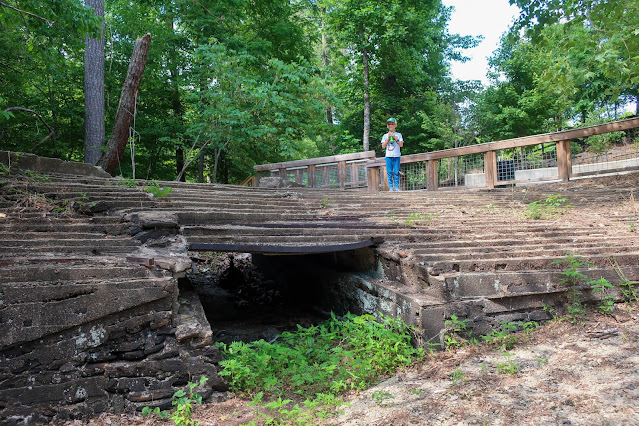 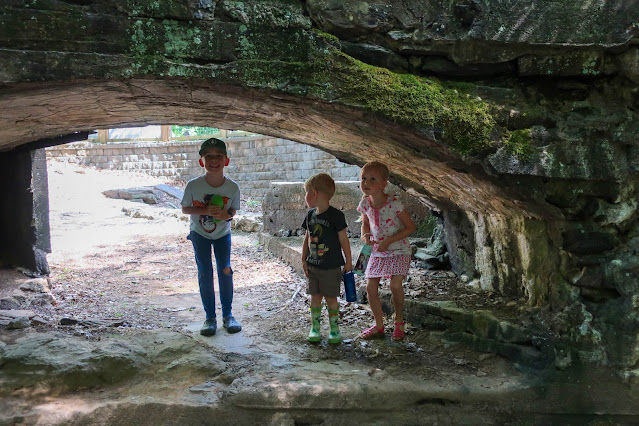 It was so nice to get out of the house together for a bit, even if by the time we had dinner all the little kids had forgotten that we even left the house and claimed their favourite part of the day was "watching Benjamin play LEGO Star Wars on the Wii." They suffer from proximity bias and tend to say their favourite part of the day was...whatever it was they were doing when they were called for dinner.
We didn't get home until after 5:00 and then Andrew and Rachel insisted that I take a nap while they got dinner ready (and I guess they sent the kids down to the basement to keep them out of the way while they cooked). There were some kids at the park eating something that had clearly come from a barbecue place, but we don't know of any nearby barbecue places, so Rachel and Andrew did their own North Carolina-style barbecue meal.
They made green beans, baked beans, shredded barbecue chicken, and hush puppies—all within an hour of getting home! They're a pretty amazing team in the kitchen!
Posted by Nancy at 10:45 PM