Rachel spent some time cleaning up her room and "putting away her childish things," which is part of growing up, I guess, but it feels wild that Rachel's doing it. She passed almost her entire wardrobe down to Miriam...but in her defense, we haven't taken her clothes shopping in ages and she's grown a lot the last couple of years (so guess what she'll be getting for her birthday). And she gave her watch to Benjamin—the watch that she begged us for on her ninth birthday (but later discovered she's not a "watch person," which I totally get because...same).
She gave it to him on Tuesday and I pointed out that she should have reserved it to give to him on his birthday because that boy was over the moon about getting her old watch. But he was happy to count it as an early gift. "Besides," he pointed out, "You're really giving me two gifts: a watch and a cake!"
And that's true because she did make his cake.
But back to the watch. Man, alive! This kid!
He spent the entire day Tuesday giving us updates on the time. I was working with him in the kitchen one morning and he was telling me the time every minute! I finally had to ask him to not tell me the time anymore. Like, I was going to try to just be patient through this stage of fascination but soon it became clear that I would either have to say something to try to get him to change his behaviour or I would absolutely snap at him. Better to speak up early, right?
So he did his best to not tell us the time every single minute but he continued to tell us the time frequently (and often in atypical ways, like: "It's 21 minutes to 6."
At the dinner table he noted the time anyone did anything remotely noteworthy.
"That prayer was 34 seconds long."
"Alexander tooted at 5:47."
"I just knew Miriam was going to choke on her water at 5:52."
Eventually he finished his dinner and Andrew sent him upstairs to do something and we all breathed a sigh of relief because that meant he wasn't telling us the time anymore. And then he made a whole-house announcement (thanks, Alexa) telling us the time and we all burst out laughing.
This behaviour continued into Wednesday (but has since begun to peter out, thank goodness). The evenings have been exceptionally lovely lately so we were outside playing. Rachel and Miriam were actually at their first in-person YW activity (an outdoor walk at the park, masked (well, my girls were masked)). I was talking to a couple of the moms in our cul-de-sac (we were standing in a triangle, six feet away from one another because even though we're all vaccinated old habits die hard) and our kids were playing (technically one mom's baby was asleep in the house, and one mom's three-year-old was running about with my three youngest, but they're all very good at maintaining their distance (Alexander ensures this)). Anyway, Benjamin didn't want to play with the little kids the whole time so he checked in with the moms frequently, always with an update on the time.
"The kids passed the ball 28 times in 1 minute."
"It's 8:45."
"It just took me 37 seconds to go up and down the driveway."
"It's 8:46."
Finally one of the other moms said (with feigned enthusiasm), "Did you get a new watch?"
"Yes!" Benjamin said. "How did you know?!"
"Just a lucky guess," she said.
And we all had a good laugh when he wandered away again. So far his watch ownership has been torture but I have high hopes that his excitement about it will wane and it will simply become a normal fixture in his life...and he will only tell us the time when he's asked for it.
Anyway, in addition to the watch he got a few other things today (I should also mention that I took the kids to the pool this morning, so Benjamin is suffering from post-pool hair in these pictures). Auntie K sent him some foraging books, but we already had one of them, so I returned it and got a survival guide. He loves them both (as I knew he would) and has been flipping through them all day: 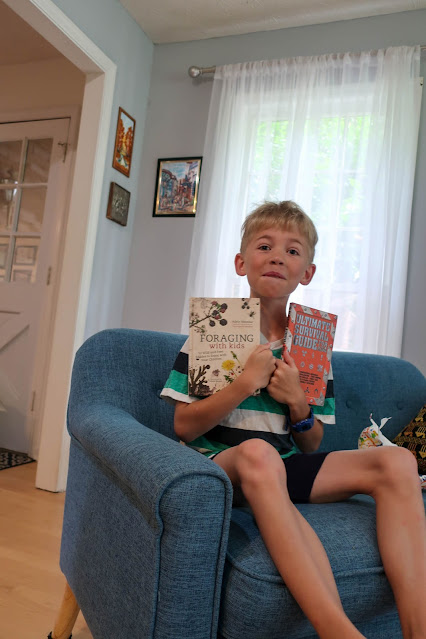 My mom sent a "Door Pong" game, which we didn't set up yet, but which Benjamin wants to try out first thing tomorrow morning. 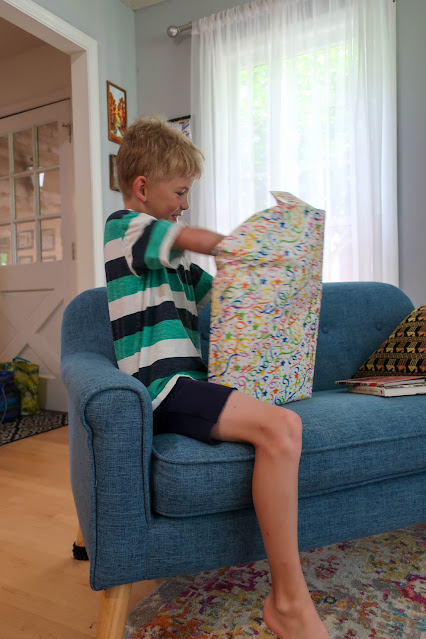 His "siblings" got him a Minecraft LEGO set (the panda nursery). In truth, I just picked it out, wrapped it, and said it was from his siblings. Rachel and Miriam believe they picked it out for him, because I guess they spent some time looking around at LEGO sets that they thought he might like and he loves Minecraft and pandas, so this seemed like an obvious choice. But they never told me that so our decisions were independent. I'm glad they felt involved in the present-giving though! He was very excited about this gift. 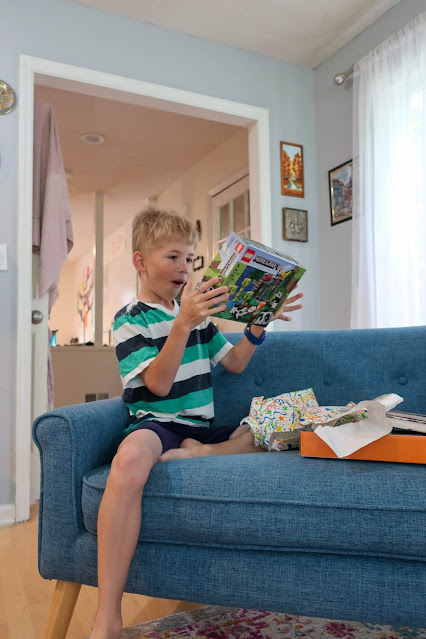 It also came with an ocelot.
Benjamin said, "Aw! I like this ocelot! It's so cute!"
And so I said, "I only like that oc-a-little."
And he didn't get it, so it was almost a wasted joke. Fortunately there were other people around to appreciate it.
We got another electronic drawing board (this time I think we said it came from Grandpa). Benjamin was surprised to find that there was already a birthday message inscribed to him on the board—right out of the box (though he quickly determined that I was the one to have done it). 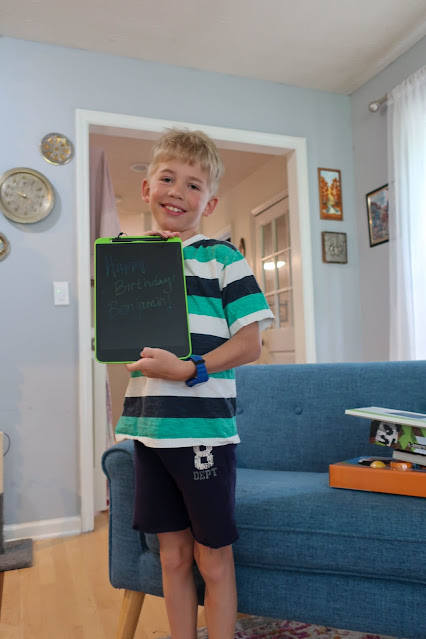 And...he got a LEGO gadgets/mechanics book/set, which he's pretty excited about, too.
After dinner, it was time for cake. Benjamin was a little disappointed by the size of his cake and kept asking Rachel if it would be bigger when she was finished. I guess his expectations are pretty high from last year (because last year's cake was rather epic) and because Zoë's cake was pretty big. But this time he just got a regular 9 x 13 cake (cut up and reassembled in a cube shape), which is plenty of cake. 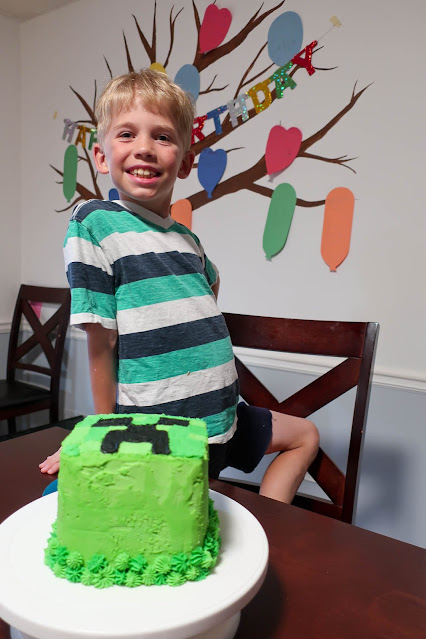 It's actually a little less than a 9 x 13 cake because Rachel forgot (or didn't realize) that she should run something along the edge of her cake before tipping it out of the pan. In her defense, I don't think she's ever baked a rectangular cake. I think she's only ever baked round cakes and those are special Wilton pans and...anyway...what ended up happening was that the middle of her cake plopped out onto the board and the edges of the cake all stuck to the pan.
She was pretty upset and cried about having to bake a whole new cake, but I told her that what she had was salvageable. She could just trim the edges to be straight and we'd have a little less cake on his birthday, which is fine because we barely finished Zoë's birthday cake and we really don't need to eat cake for two weeks straight. So, she trimmed all the scraggly edges off and then we cut what we had left into two squares and two rectangles (that fit together to form a lovely third square), turning her mess into a beautiful three-layered cube cake. 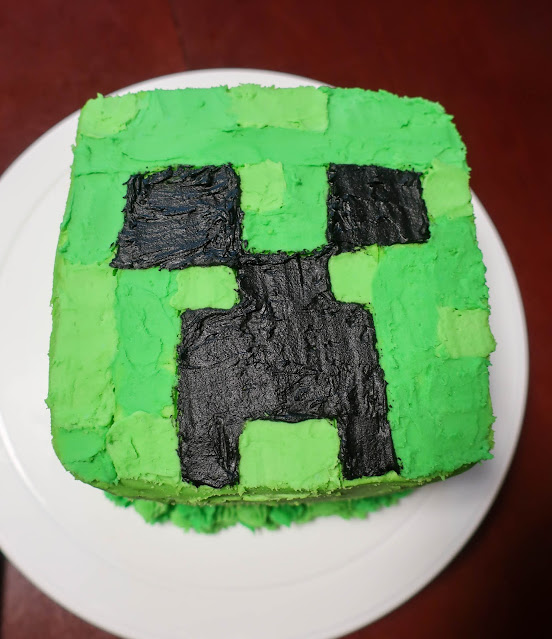 It's decorated to be a Minecraft character called a Creeper. I haven't ever played Minecraft (though I've watched my children (and husband) play a bit), so I'm not sure that I'm the best person to explain what a Creeper is. But, they're basically a nefarious creature in the Minecraft world, that stealthily pokes around and, if they encounter a player or structure of sorts they..."explode, destroying any block in the surrounding area and potentially damaging the player if they are not outside of their blast radius."
Anyway, so that's what that cake is. Benjamin was really torn between a Minecraft cake and a National Parks cake, and finally decided on a Minecraft cake for this year and a National Parks cake next year. Rachel was glad because she wasn't quite sure what a National Parks cake might look like. 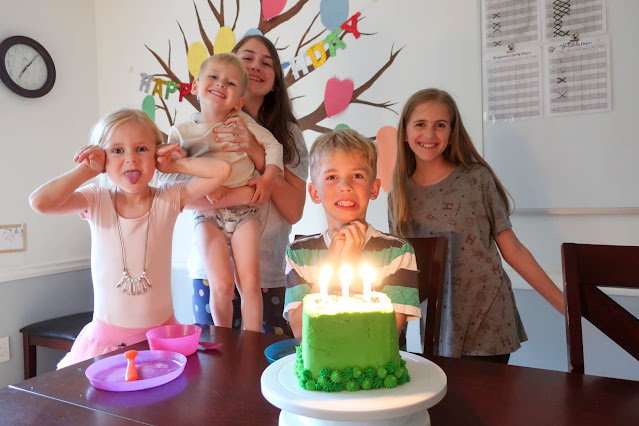 Here's Benjamin with his cake: 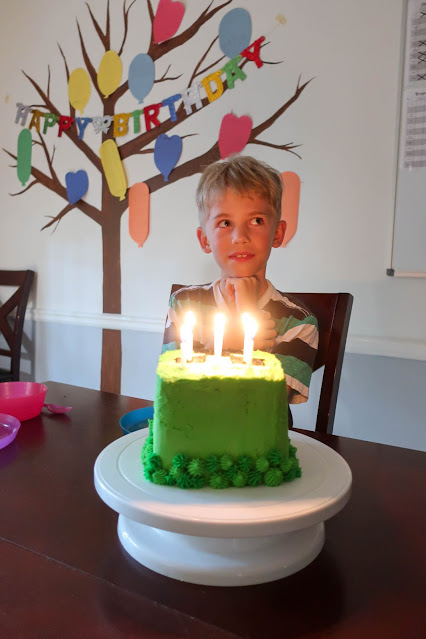 Andrew was twirling the lighter around on his finger (it's the kind with a...trigger...of sorts) and it flew off in the middle of singing Happy Birthday and he had to fumble around to catch it, which Benjamin thought was funny: 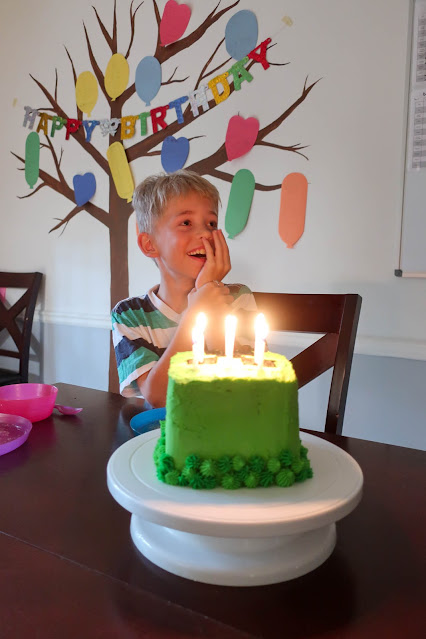 I loved this picture of Zoë staring adoringly at Benjamin while she was singing: 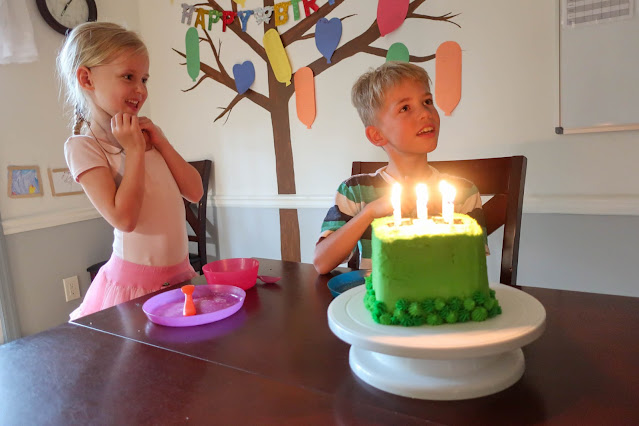 And here's Benjamin admiring his cake, after having blown out his candles with one breath: 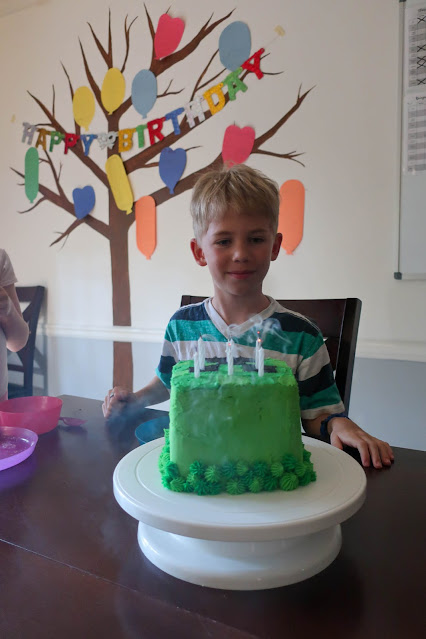 And here he is showing off the beautiful layers in his cake: 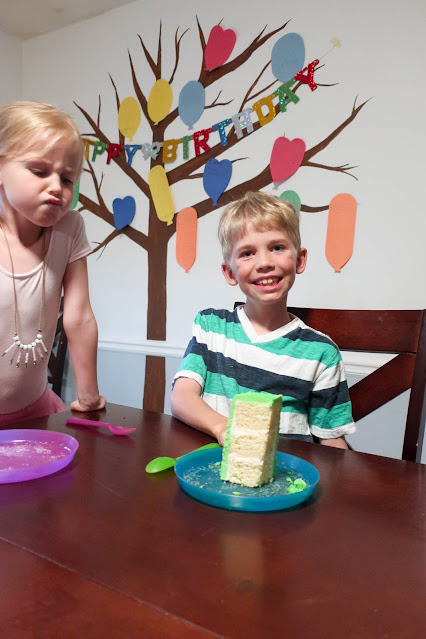 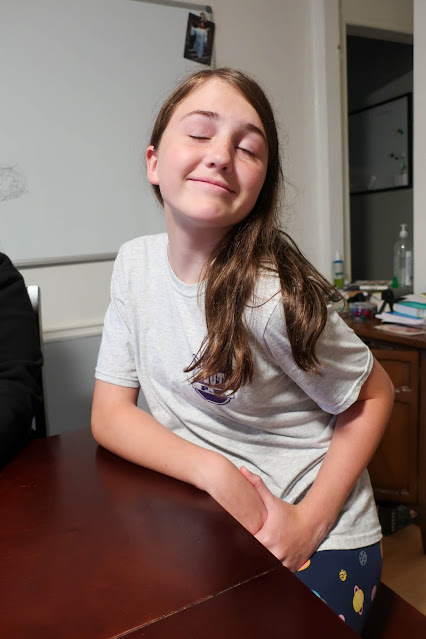 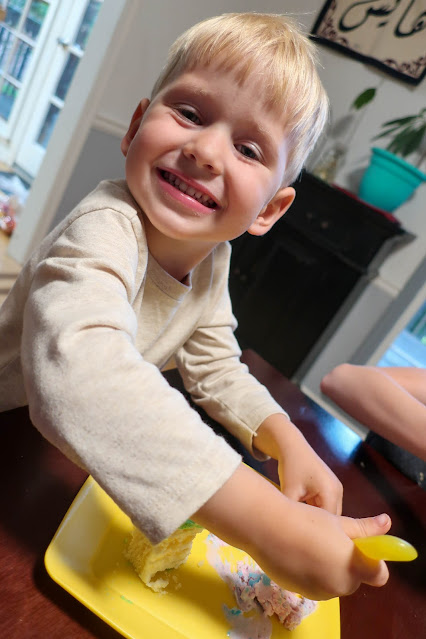 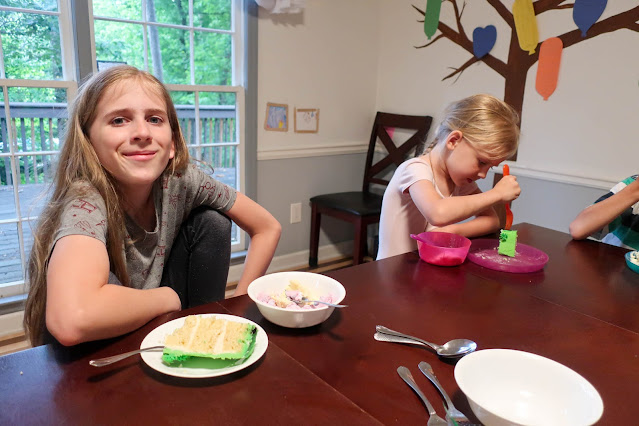